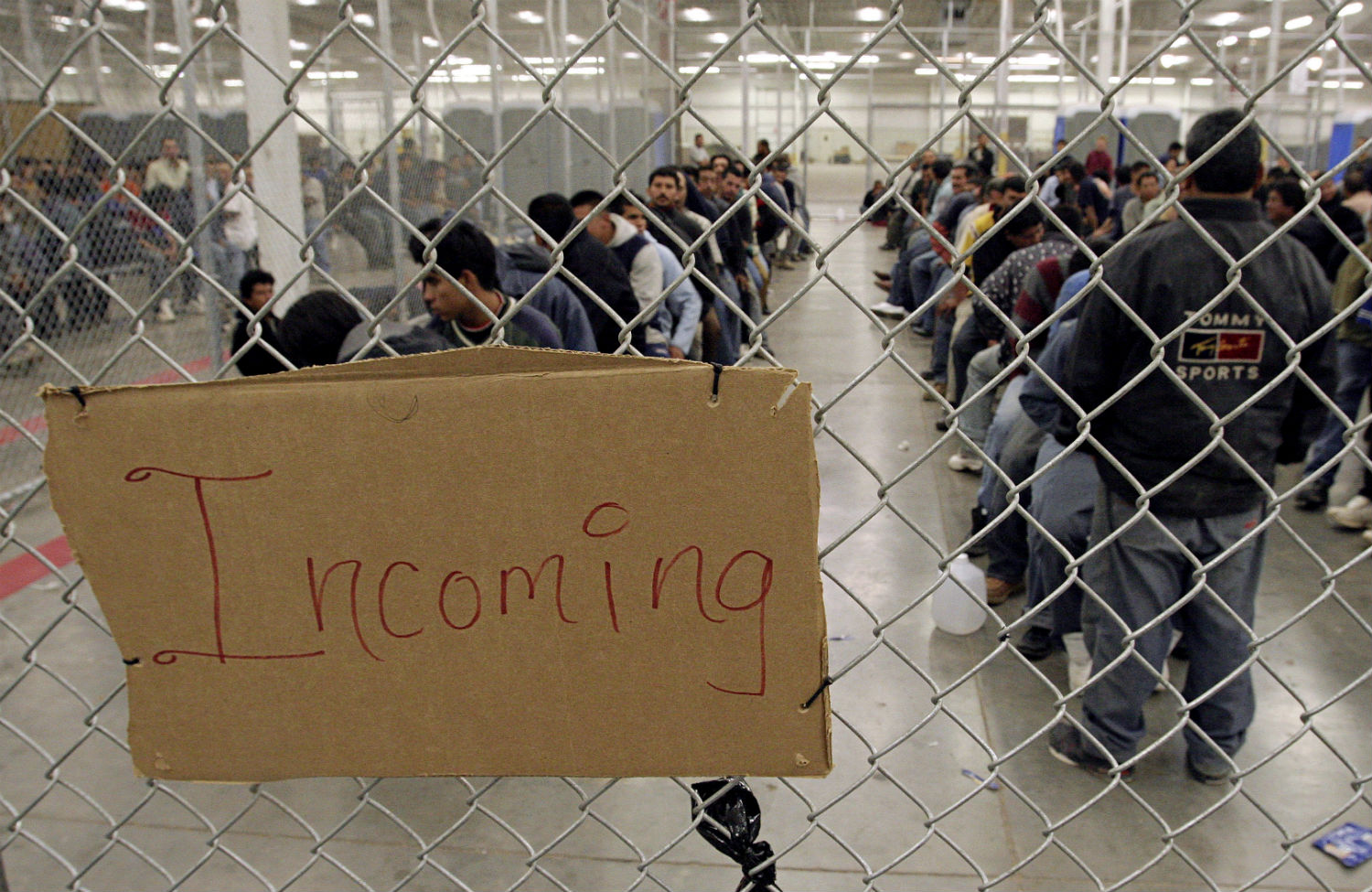 Undocumented immigrants wait in a holding facility at the US Border Patrol detention center in Nogales, Arizona (Reuters/Jeff Topping)

On Monday, President Obama ripped into the GOP for turning its back on the country’s immigration crisis, and announced that he was preparing to take unilateral action by the end of the summer to change the country’s enforcement policies. The announcement stirred up bluster from the usual suspects about executive overreach—never mind that it was John Boehner himself who, in a meeting on June 24, reportedly informed Obama that reform legislation is dead in the House, at least for the rest of the year.

Despite mounting pressure from immigrant rights groups, Obama has refrained from revising heavy-handed enforcement policies for months, ostensibly to create political space for Republicans to move their own legislation forward, something they claimed—and continue to claim—they want to do. Now that the charade is over there’s no reason for the president not to act. Republicans have never explained what else he could do to earn the “trust” they say is lacking; Obama has already presided over a record-breaking 2 million deportations, and Senate Democrats even offered to change their legislation so that it wouldn’t go into effect until a new administration takes over in 2017.

If Obama has given up trying to appease the GOP and wants to shift away from a policy that emphasizes deportations, it’s hard to explain why he is considering weakening a law intended to ensure that children aren’t removed to violent situations and to protect victims of child trafficking, in order to more quickly remove the unaccompanied minors flooding over the borders.

“It’s an utter devastation of due process for our most vulnerable community members,” Ruthie Epstein of the ACLU said in response to the administration’s acknowledgement that it is considering changes to the William Wilberforce Trafficking Victims Protection Reauthorization Act. That law shields children from countries who do not share a border with the United States from immediate deportation. It mandates that they must instead be handed over to Health and Human Services, which helps them access legal counsel to advise them on the process of applying for asylum, and in some cases releases them to US relatives. The new proposal would let Border Patrol agents make the decision to deport the children they arrest after only a brief screening interview, denying the children access to legal counsel.

Obama said on Monday that speeding up the deportation of children was intended to send “a clear message to the parents in these countries not to put these kids through this. The problem is that our system is so broken, so unclear that folks don’t know what the rules are.” According to the White House, “a deliberate misinformation campaign” led by “criminal syndicates in Central America” is responsible for encouraging children to travel to the United States. But there’s ample evidence that those kids aren’t chasing misleading rumors in hopes of catching the American dream. They’re fleeing violence and extreme poverty.

The Department of Homeland Security itself cited these underlying causes in a document obtained by the Pew Research Center. Five percent of all of the children arrested at the border since October are from a single city in Honduras, San Pedro Sula; both the city and the country have the highest murder rate in the world. The bulk of the children arriving in the recent surge are from Honduras, El Salvador and Guatemala, where homicide rates have risen by 99 percent in the last decade, according to one recent study. Those three countries are also among the poorest in Latin America.

In other words, what’s happening at the US-Mexico border looks more like a refugee crisis than the invasion the right wing describes. It’s true that the arrival of tens of thousands of children has overwhelmed Border Patrol stations and Health and Human Services’ shelter system. Accordingly, the administration says that moves to “streamline” the deportation process are being made out of humanitarian concerns, a claim that might hold up if streamlining referred to increasing the resources available to those children so that they could more quickly access legal counsel and get a fair hearing in court. The desire for an expedient solution, however, should not undercut their right to due process.

Obama is sending a convoluted message about his position on enforcement. Immigrant rights groups have long awaited the shift in policy he prefaced on Monday by announcing his intention to move unilaterally to “make the immigration system work better.” Now it’s becoming less and less clear what he mean by “better.” Having conceded that the GOP will block legislation for the foreseeable future no matter what he does, the president no longer has a political excuse for prioritizing a tough stance over humane policy. And yet, when it comes to kids at the border, Obama is advocating for weaker legal protections and a building-up of the country’s deportation machinery—a clear win for immigration opponents and the private companies running detention centers, but a bleak development for immigrants themselves.