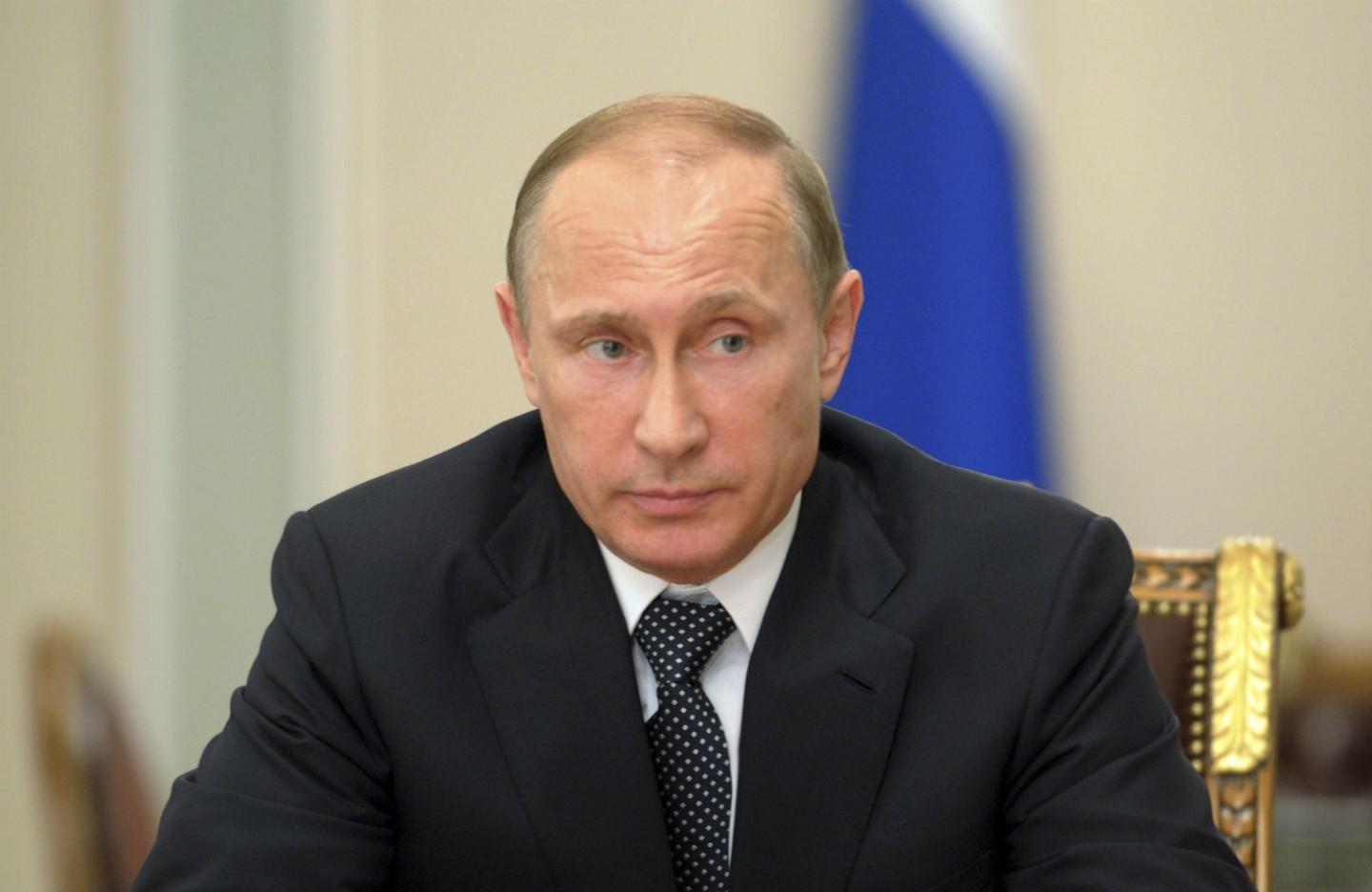 Is it too late now to say sorry? We’re about to find out. Amid the scores of front-page stories alleging that an omnipotent Kremlin tried to rig the 2016 election for Donald J. Trump, readers may have missed an important piece of information that undermines one of our most dangerous ruling narratives: the demonization of Vladimir Putin. In early November, almost a year to the day after a former Putin aide and Russian state media executive Mikhail Lesin was found dead in his hotel room in Washington, DC, the US Attorney for the District of Columbia released its findings on Lesin’s death. The statement declared that “after days of excessive consumption of alcohol” Lesin “sustained the injuries that resulted in his death while alone in his hotel room.”

Lesin’s body was found on the morning of November 5, 2015. In the months that followed, the American mainstream media machine kicked into high gear, spinning countless conspiracy theories and more often than not pointing the finger of blame for Lesin’s death at Putin. The episode is instructive in light of the recent wave of McCarthyite hysteria that has swept the political establishment over the alleged links of the Trump campaign to the Russian government. As with the media’s coverage of Lesin’s death, there is no evidence to support the claims. Still, they continue undaunted, as embarrassing, evidence-free hit pieces designed to smear Trump and former advisers like Paul Manafort and Carter Page as Russia’s useful tools.

A look at the media coverage in the weeks and months following Lesin’s demise at the Dupont Circle Hotel sheds a good deal of light on the media’s modus operandi regarding all things Russia.

On March 10, 2016, the New York Times reported that while the DC medical examiner “did not declare his death a criminal act, the authorities clearly no longer consider it to be the result of natural causes.” In fact, according to the Times “the mystery surrounding his rise and fall had only deepened.” Karen Dawisha, the author of the book Putin’s Kleptocracy, was quoted saying that Lesin “knew more than most about the system’s dark center.” The Washington Post followed up the next day with a piece titled “Report deepens mystery of former Putin aide’s death at DC hotel.” The Post noted that Lesin’s death had “fueled conspiracy theories around the globe.” Citing one of them, the report informed readers that critics of the Kremlin “have advanced theories that Lesin may have been killed because officials feared he was about to cut a deal with federal authorities investigating his land dealings in California.”

Then Masha Gessen took to the pages of the took to the pages of The New York Review of Books and called Lesin’s death perhaps “the strongest evidence to date of the kind of state Russia actually is: a mafia state.” According to Gessen, a highly sought after author and journalist who frequently graces the pages of The New York Times and other elite publications, Lesin was a man on the run: “rumor had it that he had a falling out with Aleksei Miller, a native member of the Putin clan who is CEO of Gazprom, the state oil conglomerate. As a result,” writes Gessen, “Lesin lost his job as head of the media company nominally owned by Gazprom.” Gessen speculates that Lesin’s decision to seek refuge in the US in the aftermath of the “falling out” gave the “Putin clan” sufficient cause to murder him. After all, “at a time when any number of Western law-enforcement agencies are investigating the business operations of the Russian elite, Lesin was roaming too far and too freely on enemy territory.”

The media's coverage of Mikhail Lesin’s demise sheds a good deal of light on its modus operandi with all things Russia.

Needless to say, things didn’t turn out well for Lesin. Gessen informs readers that “it looks like Lesin was beaten within an inch of his life and then deposited back at his hotel. He probably had reason to go up to his room, alone, instead of seeking medical help. He died there, and he was found the next morning.” What lesson does the author glean from such an ugly episode of state-sponsored murder? Well, according to Gessen, “each killing sends its own message, and most at least try to create the illusion of deniability. Whoever killed Lesin was apparently trying to do the opposite. Mafia clans sometimes like to remind their members that rules are not to be broken.”

Not surprisingly, the online tabloid The Daily Beast helped lead the way in portraying a drunk man’s fall in a hotel room as part of a dark Kremlin-inspired conspiracy. Two days after Lesin’s body was found, the Web site published a piece titled “The Dark Past of Putin’s Media Chief.” A week later, November 12, Anna Nemtsova came out with “Putin’s Pals Are Russian Patriots Until They Get Sick,” which noted that “Lesin’s family said that he had died of a heart attack, but those who knew the dark waters of the media boss’s life were not ready to believe the first draft of that story.” Speaking to a friend of Lesin’s, Nemtsova told readers, that he expressed “a hope to hear the truth about Lesin’s last secret one day soon.”

On January 10, 2016, The Daily Beast’s Shane Harris asked “Was Putin’s Media Chief Ready to Snitch Before He Dropped Dead?” Harris reported that “in some foreign policy circles in Washington” there was “speculation that Lesin was murdered after coming to Washington to cut a deal with the FBI.” According to Harris, rampant speculation and conspiracy theories regarding Lesin’s death “are arguably well-founded, because it wouldn’t be the first time someone who posed a political threat to Putin wound up dead under unusual circumstances, including poisoning.”

Harris closed his offering with a nice bit of melodrama: “The walls were closing in on Lesin—in Washington and in Moscow. Perhaps Lesin’s trip to that DuPont Circle hotel was his first step towards a new life. But if he’d become an enemy of Putin and his friends, even the FBI might not have been able to save him.”

Two months later, Harris was at it again with “RT Founder Mikhail Lesin’s Fishy Blunt Force ‘Suicide’” in which he doubled down on the FBI connection. Citing unnamed sources who Harris claimed were “close watchers of Lesin’s case” it was “all but certain” Lesin was “being pursued by U.S. law enforcement.” “The mystery surrounding Lesin’s death,” concluded Harris, “had fueled speculation that Lesin was murdered after coming to Washington to cut a deal with the FBI.”

Time magazine also got in on the act with Simon Shuster’s “The Rise and Fall of the Putin Propaganda Czar Who Met a Violent End.” Shuster, noted that “the marks of violence” on Lesin’s body, coupled with “his refusal to comply with some of Moscow’s orders in the months and years before his death…have renewed speculation that the case could lead back to the Kremlin.” Recounting Lesin’s rocky career, Shuster observed that “Lesin long showed a knack for trying to game the system for his own benefit. The question now is whether that habit might have gotten him killed.”

The Slide Toward War With Russia

Not to be outdone, The New York Observer’s national security “expert” John Schindler published “Another Defector Dead in Washington: A former member of Putin’s inner circle has died violently and mysteriously in our nation’s capital.” Schindler informed readers that “We know Vladimir Putin has defectors killed…in Stalin’s time such ‘wetwork,’ to use the Kremlin term, against defectors and enemies abroad was considered routine, and Mr. Putin has resurrected this odious practice.” He concluded that “if Kremlin agents are conducting assassinations on American soil, brazenly in our capital, the public has a right to know.”

Meanwhile, New York Times Russia correspondent Andrew Kramer returned to the theme of Kremlin malevolence in August with “More of Kremlin’s Opponents Are Ending Up Dead.” With all the subtlety of a jackhammer, Kramer told readers that “no other major power employs murder as systematically and ruthlessly as Russia does against those seen as betraying its interests abroad.” To buttress his sweeping claim Kramer naturally cited “the death of a Kremlin insider, Mikhail Y. Lesin, 57, in a Washington hotel room last year.”

Now that the US Attorney has reached the conclusion that Lesin’s death was indeed accidental, we might expect retractions, corrections and mea culpas from the self-styled arbiters of acceptable opinion regarding Russia. It’s not too late for these writers and publications to say sorry. But don’t hold your breath. The name of the game is to play to the darkest fears of the American people regarding the enemy du jour—the facts be damned.