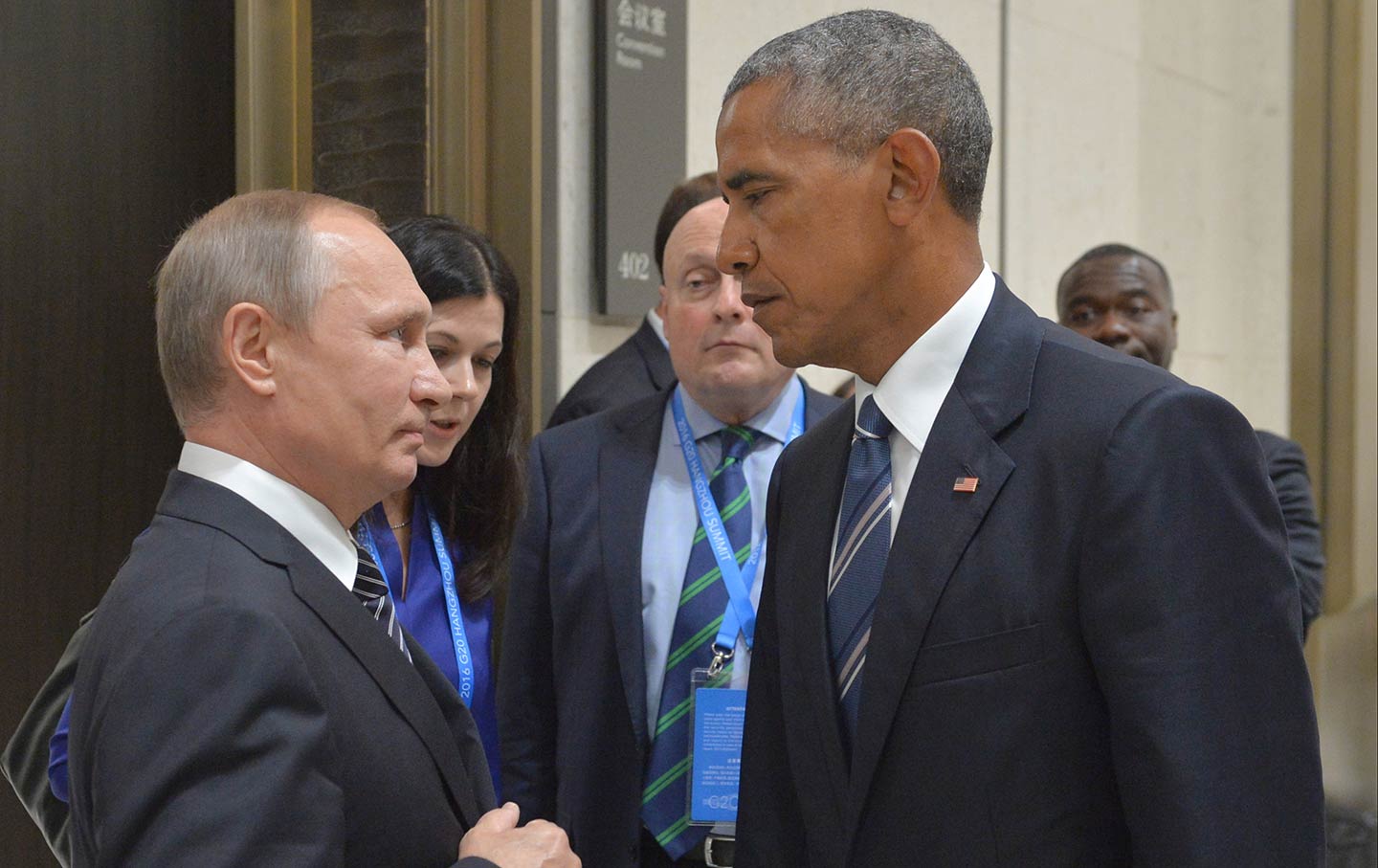 In recent weeks, US-Russian relations have reached a perhaps fateful and exceedingly dangerous turning point, provoked by growing tensions on multiple overlapping fronts. The CIA is reportedly readying a “cyber covert action” in retaliation for Moscow’s alleged hack of the Democratic National Committee, with Vice President Joe Biden declaring that the administration will be “sending a message” to Russian President Vladimir Putin “at the time of our choosing.” The Clinton campaign has denounced Putin for “trying to put his thumb on the scale through cyber-attacks aimed at influencing the election.”

Such a series of overt threats against Russia is almost without precedent. Ominously, many in the Russian political elite see this as a prelude to war. As Moscow’s UN ambassador observed, relations are “probably the worst since 1973.” (At the height of that year’s Arab-Israeli conflict, US military forces were placed at DEFCON 3, the second-highest level of alert.) Russia just staged a civil-defense drill involving up to 200,000 personnel and has deployed nuclear-capable missiles to its European enclave in Kaliningrad. Putin has also withdrawn from a long- standing nuclear-security pact with the United States; in defense of the suspension, his administration pointed to a “radical change in circumstances, the emergence of a threat to strategic stability as a result of hostile actions of the United States of America.”

The saber rattling comes amid news that the most recent round of talks to achieve a cease-fire in Syria has ended without progress, even as the war there enters a new and more dangerous phase (though it appears that the talks will continue). After the collapse of the September 9 cease-fire agreement, the carnage in eastern Aleppo escalated to horrifying levels, with Secretary of State John Kerry calling for a war-crimes investigation of the Russian and Syrian governments.

Now the bipartisan war party in Washington sees an opening to push President Obama toward a military solution. The State Department, the CIA, and the Joint Chiefs of Staff have been examining military options, even as prominent figures—including, most worryingly, Hillary Clinton—have stepped up calls for the establishment of a no-fly zone in Syria. The assumption seems to be that escalation would be a consequence-free choice, but nothing could be further from the truth.  Gen. Martin Dempsey, former chairman of the Joint Chiefs, has warned that a no-fly zone would require hundreds of US military personnel and would cost up to $1 billion a month. Also, Russia has deployed highly sophisticated S-300 and S-400 antiaircraft systems in Syria, and its defense ministry has warned Washington against carrying out air strikes on Syrian regime forces. The unavoidable fact is that the establishment of a no-fly zone is a recipe for direct war with Russia, with potentially catastrophic consequences for the entire planet.

Throughout the 2016 campaign, the establishment media have crafted a narrative in which one can accuse Russia of virtually anything. Accusations of Russian hacking and electoral interference are still largely unsubstantiated, but high-profile Clinton surrogates like former CIA directors Michael Morrell and David Petraeus tirelessly promote what MIT professor emeritus Theodore Postol has described as “another serious and unjustified escalation of empty but highly dangerous rhetoric from the US side against Russia.” Those who dissent from the narrative are often unfairly smeared as Trump supporters, leading to the squelching of debate.

The Nation has long argued that “no modern precedent exists for the shameful complicity of the American political-media elite” in the rush to a new Cold War. As German Foreign Minister Frank- Walter Steinmeier recently observed, “It is an illusion to believe this is the old Cold War. The new times are different; they are more dangerous.” For that reason, said Steinmeier, “the USA and Russia must continue talking with each other.”

We call for an end to brinkmanship and a return to the hard but necessary work of diplomacy before it is too late. Former Soviet leader Mikhail Gorbachev, who along with President Reagan worked to end the first Cold War, urged the two sides to “return to the main priorities, such as nuclear disarmament, fighting terrorism and prevention of global environmental disasters.” Said Gorbachev, “We need to renew dialogue.” We agree, and we urge Presidents Obama and Putin to do so at once.