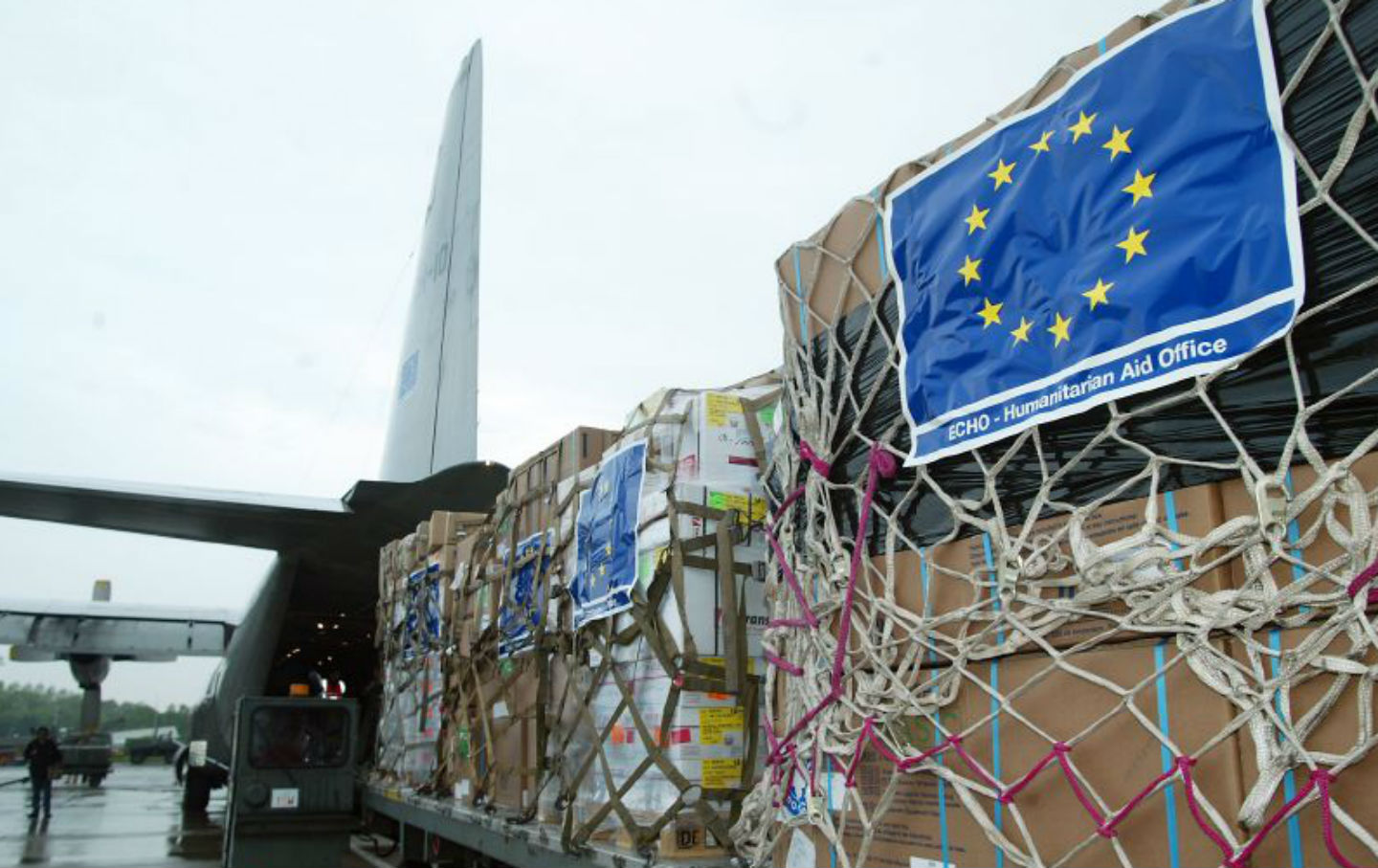 Humanitarian aid marked with the European Union flag awaits shipping. The EU is made up of 28 countries in Eastern and Western Europe. (Wikimedia Commons)

Reading the papers, one would think leftist euroskepticism was a new phenomenon; count on the late Daniel Singer, longtime European correspondent for The Nation, to disprove it. In this piece about the Maastricht Treaty, which passed on this day in 1993 and created the European Union, Singer describes with perfect clarity and contemporary relevance the difference between euroskeptics of left and right, and points to a future for European socialism that has still not yet arrived.

Who opposes this capitalist construction of Europe? On the right, you have the traditional conservatives, who really want to stop the clock. Next to them, however, you have the dangerous demagogues seeking their political fortunes by channeling discontent against “alien” scapegoats—the Arab, the Asian, the Gypsy, the Jew. It is the voice of these demagogues that now echoes loudly across the Continent.

Harder to define are the left-wing dissenters, best described as opponents of Maastricht in the name of a different Europe. Depending on the countries they come from, these include former New Leftists, progressive Greens, unorthodox Communists and Socialists disappointed by their party’s moderation. Theirs is the most difficult discourse to formulate. They must, at all costs, avoid any confusion with the jingoists. Hence they must show that they don’t give a damn about frontiers and are ready to cooperate with workers’ councils or labor unions of other countries. They must point out that only a Western Europe with grass-roots democracy and a different social structure can stand up to the United States and attract the rest of the Continent in a progressive direction. Actually, proponents of this still uncharted socialist alternative are to be found on both sides in the Maastricht debate: Some think the capitalist invasion must be fought within national borders, while others believe the battle must be waged on the European front.

The movement that is foreshadowed by such skirmishes will not be built overnight. And in one sense, there is ample time. However dramatic the warnings, the E.E.C. [European Economic Community] will not fall to pieces; it embraces too many commercial ties and vested interests for that. The rush toward some kind of federation, however, has undoubtedly been slowed.

In another sense, though, time is running out. The terrible stories from Bosnia tell us where “ethnicity” can lead; the racism in Rostock revives ghosts of the past. The murderers are among us. With the Stalinist Soviet model duly shattered, it is high time for people throughout the Western world to start thinking again of an entirely different society and not to do so in purely domestic terms.