One notebook is a cause of and solution to the confusion, frustration, and violence at the US border. (Reuters / Edgard Garrido)

At 7:30 am on November 26, a crowd gathered at the El Chaparral plaza in Tijuana, Mexico. More than a hundred migrants had gathered just outside the San Ysidro border crossing, many to sign up for a waiting list to apply for asylum. At the front of the queue, a woman in jeans and a plain shirt sat at a desk underneath a blue tarp and jotted down names in a hardcover purple, yellow, and red notebook. She assigned each name a number and then handed a scrap of paper with that number to the asylum seeker. She had no uniform, no name tag. She wasn’t a US customs official, Mexican immigration officer, or representative of any governmental body. She was an asylum seeker herself—one of roughly 10,000 migrants in the city, most of them from the recent Central American migrant caravan.2

The woman was adding to a notebook that had nearly 1,700 handwritten numbers, each representing about 10 people ready to turn themselves in to US Customs and Border Protection (CBP) and request asylum in the United States. CBP uses this list to call people in to process their requests. There is no digital version. Officially, it doesn’t exist, because CBP’s reliance on it is arguably against US law—but without it, chaos at the border would be tenfold. The list is managed by a committee of six or seven asylum seekers, who are replaced when their own numbers get called. The notebook is at once a cause of and a solution to the confusion, frustration, and violence at the San Ysidro port of entry, where CBP and US military police recently tear-gassed Central Americans protesting near the border.3

Every morning CBP tells Mexican immigration officials how many migrants they can accept through the port of entry that day. Mexican immigration gives that number to the asylum seeker in charge of the notebook. Then the lead person calls a few numbers off the list in Spanish.4

There Is No Left Case for Nationalism

On Monday, surrounded by hopeful asylum seekers listening with anticipation, the notebook keeper yelled, “1,137… 1,138… 1,139… 1,140,” calling about 40 people to apply for asylum. There were a total of 1,641 numbers on the list, which gets longer with each day. When she finished, the ones whose numbers weren’t called shuffled away or loitered about the plaza, disappointed again.5

In Tijuana, with the arrival on November 15 of the Central American migrant caravan—which prefers the name “exodus”—there are far more applicants than the CBP can process. This has created a five-week-long bottleneck, which means that virtually no one from the caravan has even begun the application process. CBP is currently processing an average of 70 people a day at San Ysidro, according to Pueblos Sin Fronteras, an organization working on the ground to aid migrants.6

Meanwhile, about 5,000 Hondurans, Salvadorans, Guatemalans, and others from around the world wait in about 30 packed shelters to be called. Thousands more aren’t even on the list. The main facility sheltering migrants is Benito Juarez—a sports stadium with nearly 5,800 people crammed in unclean and dangerous conditions. Many are confused, desperate for some kind of order to materialize. LGBTQ people and unaccompanied children are especially at risk in this volatile environment, often having to be transferred to more secure shelters. Last week, the mayor of Tijuana declared a humanitarian crisis and asked United Nations officials to aid with the recent influx.7

The origins of this kind of “metering” began nearly three years ago, according to Alex Mensing, a project coordinator at Pueblos Sin Fronteras. In early 2016, Haitians fleeing economic recession in Brazil began arriving in Tijuana, camping outside of San Ysidro border crossing in tents. Mensing said that this was when CBP officials first started coordinating with Mexican immigration to stem the flow of asylum seekers, essentially handing over the initial vetting process to a foreign government.8

CBP, for its part, acknowledges this. “CBP has established a collaborative bi-national effort with The Government of Mexico and Non-Government Organizations to assist with the flow of individuals to the border, based on capacity and infrastructure constraints,” a CBP spokesperson wrote in an e-mail. CBP refused to acknowledge the existence of the list.9

Back then, Grupos Beta—a humanitarian unit within Mexico’s immigration agency—would work with Tijuana shelters to house migrants while they waited, giving each person a stamp or a ticket with a number on it. When your number came up, Grupos Beta came to pick you up and take you to the US Border Patrol to present yourself. Grupos Beta is unofficially known as the “gatekeeper” of the current list and stores it every night for safekeeping.10

Considered economic migrants and therefore not eligible for asylum, Haitians later started getting deported “by the airplane-load,” in Mensing’s words, and as the number of asylum seekers declined, the list fizzled out. In the absence of a list, border officials simply started lying to asylum seekers arriving at the port of entry, telling them that “asylum was canceled.”11

While creating some order, the notebook has set off alarm bells among legal experts. One possible explanation is that CBP knows an official waiting list is illegal under American asylum law, and it wants to benefit from it without being associated with it. When an asylum seeker arrives in the United States, CBP is required to process their request without unnecessary delay. This might mean detaining them in federal custody until a screening interview can take place, but officers aren’t supposed to turn them away.12 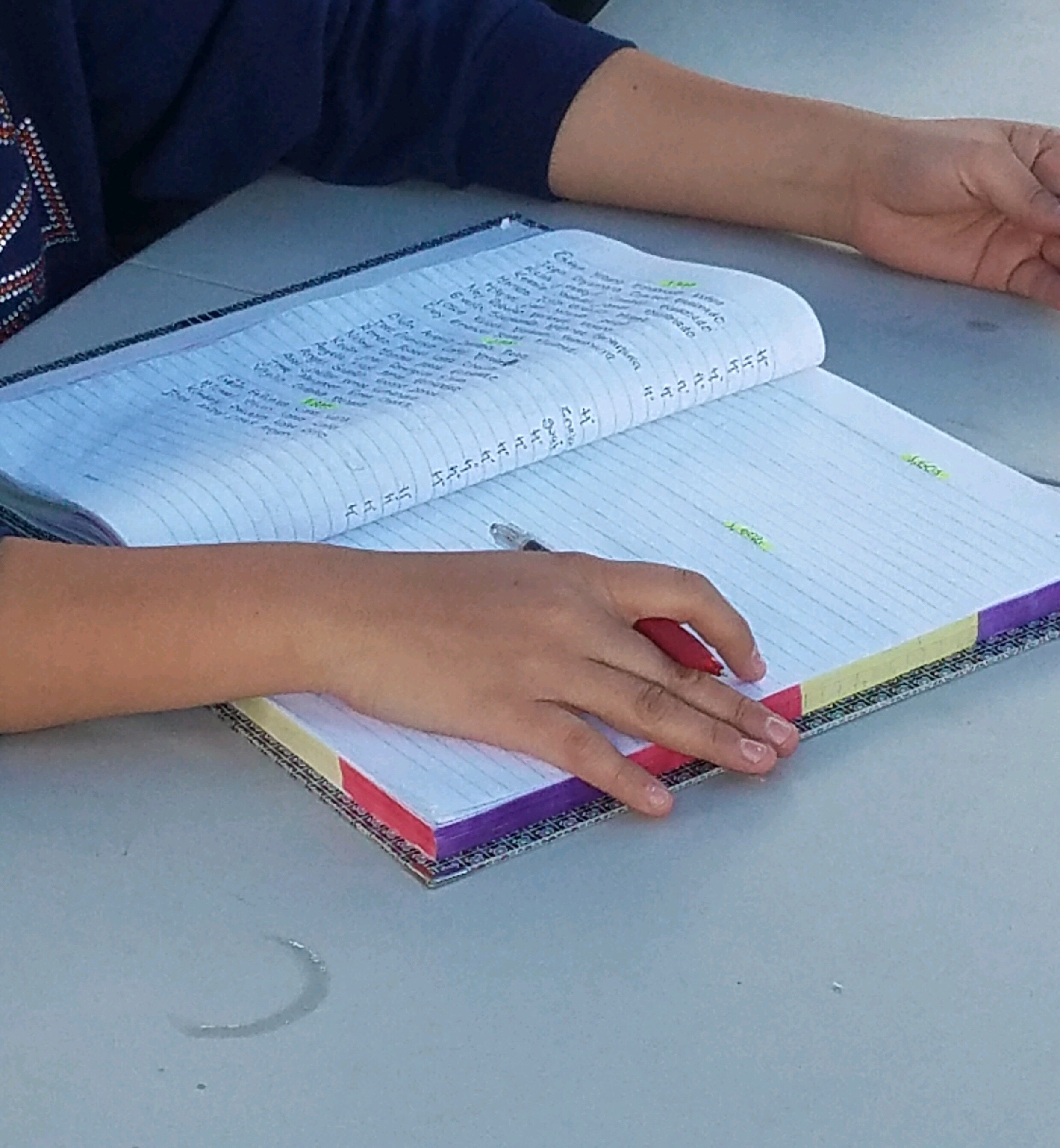 A migrant fills out the notebook that determines when people can apply for asylum in the US. (Lolita Brayman)

In July 2017, the nonprofit Al Otro Lado filed a class-action lawsuit against CBP for its unlawful practice of rebuffing asylum seekers at the US-Mexico border. The plaintiffs, which include six asylum seekers, allege that the government’s refusal to allow asylum seekers to pursue their claims violates the Immigration and Nationality Act, the Due Process Clause of the Fifth Amendment, and international-law norms. Litigation is still pending.13

CBP’s extralegal use of the list leaves immigration attorneys, most of whom aren’t even aware of the list’s existence, mired in an illegible legal landscape when trying to counsel asylum seekers on the most important interview of their lives.14

“It’s nearly impossible to explain to someone what the procedure is when we’re talking about this process that doesn’t seem to make much sense,” said Lindsay Toczylowski, executive director at Immigrant Defenders Law Center in Los Angeles. “I can tell everybody everything that’s going to happen [in an asylum application]. I know exactly what you need to think about to prepare. Except for the list.”15

On November 24, The Washington Post reported that the United States allegedly came to a deal with the incoming Mexican government to formalize what is already happening: Asylum seekers would have to wait in Mexico for processing. Mexico denied it, but, either way, the leftist administration that comes to power tomorrow will play a key role in determining how migrants will navigate the ever-changing US asylum policies. The new government will have the chance to endorse the notebook or prevent its use.16

So is the list a good thing or a bad thing? On one hand, it has created a flawed but functional bureaucracy. But at the same time, it legitimizes the US refusal to follow its own laws, and any sense of order the list creates is really an organized coping system maintained by asylum seekers to deal with secret and illegal US border policies. The list’s lack of formality or transparency has led some would-be asylum seekers to be completely unaware of it, to distrust the asylum seekers managing it, or even to suspect it of being a covert deportation list.17

“To be toyed around with and not knowing what their options are, or have any sense of the wait time or how long they need to endure those conditions is really what led to people just reaching a breaking point [on November 25 when asylum seekers protested at the border],” Toczylowski said.18

Tensions between migrants and locals continue to mount at the shelters and around Tijuana. Rumors are spreading about the possibility of the city’s establishing a permanent refugee camp farther away from the border. There are also allegations of corruption among the list managers. Trust in the makeshift system is fragile.19

“By violating the rights of asylum seekers, CBP is not only breaking the law, they are also manufacturing a crisis of resources and humanitarian assistance in the city of Tijuana,” said Ian Philabaum, program director of Innovation Law Lab, which develops technology and collaborative models to support immigrant rights.20

Aid groups are caught in the bind of figuring out how to abet the usage of the list to help migrants in the short term while simultaneously denying its legality.21

Tijuana is the only known place where a committee of asylum seekers manages a physical list, but the concept exists at other border crossings. Ninety miles away, in Mexicali, Toczylowski led a disabled woman who was eight months pregnant, along with her child, brother, and father, up to the port of entry to request asylum. Instead of processing them, CBP officials told them they needed to first apply for Mexican asylum—a fact that a lawyer present informed them was false. CBP then said they weren’t on the list of asylum seekers that Grupos Beta gave them each morning.22

She took the family to Grupos Beta, which told them they couldn’t get on the list because they didn’t have a travel permit to be in Mexico. All they would need to get one was to travel to the border with Guatemala more than 2,000 miles away to get permission to travel through Mexico. Then they could join the waiting list to ask to be granted asylum.23

Later that week, Toczylowski said she saw that same family in Tijuana. They’d been illegally prevented from seeking asylum in Mexicali and were now putting their faith in the Tijuana notebook.24