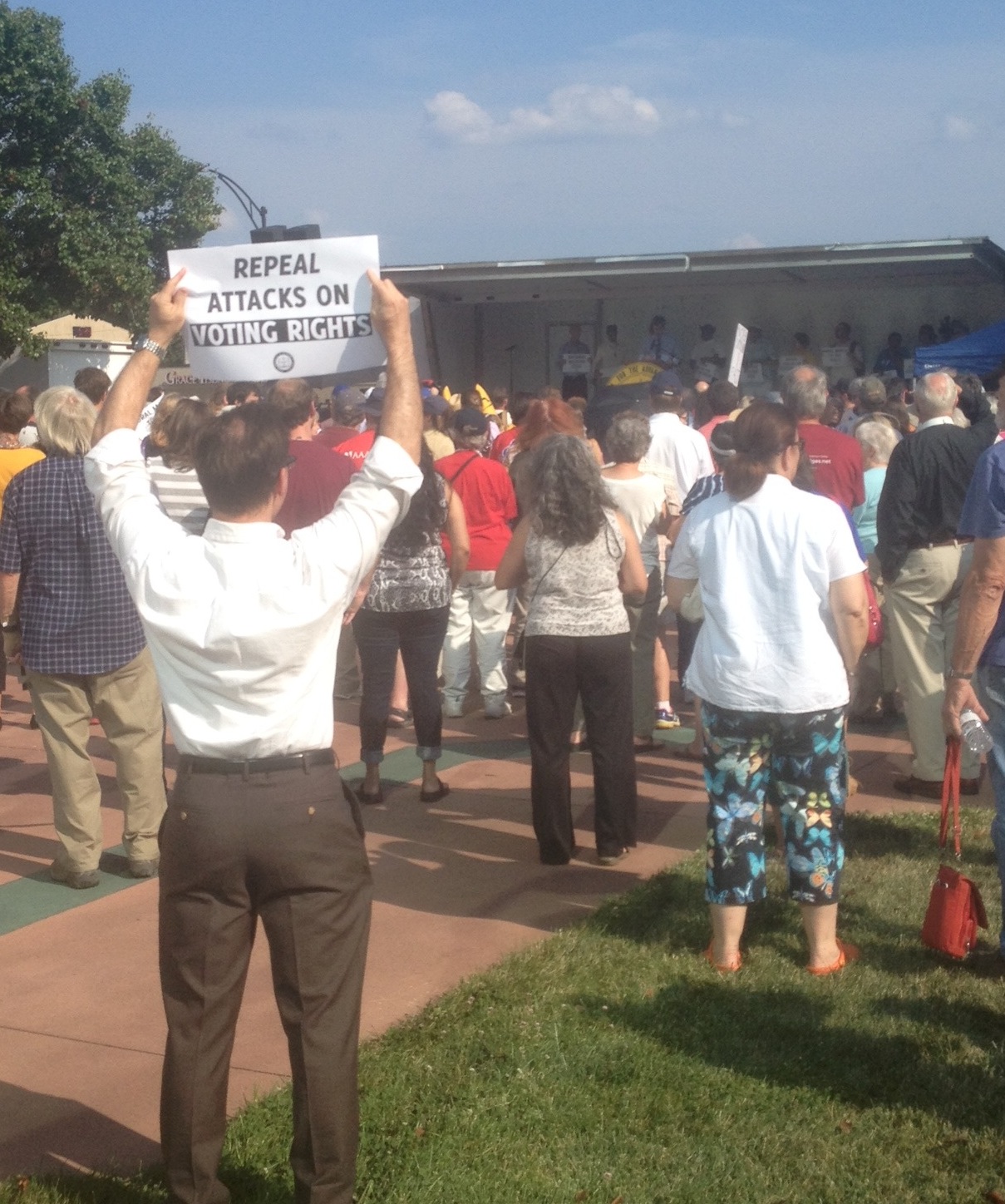 On Wednesday, August 6, the country celebrated the forty-ninth anniversary of the Voting Rights Act, the most impactful civil rights law ever passed by Congress. Two days later, a federal judge in North Carolina denied a preliminary injunction to block key provisions of the state’s new voting law, widely described as the most onerous in the country.

North Carolina’s new voting restrictions will now be in effect for the 2014 midterms and beyond, pending a full trial in July 2015, a month before the fiftieth anniversary of the VRA. The federal government and plaintiffs including the North Carolina NAACP and the League of Women Voters argued during a hearing last month that three important parts of the law—a reduction in early voting from seventeen to ten days, the elimination of same-day registration during the early voting period, and a prohibition on counting provisional ballots cast in the wrong precinct—disproportionally burdened African-American voters in violation of Section 2 of the VRA and should be enjoined before the 2014 election.

Judge Thomas Schroeder of the Middle District of North Carolina disagreed. “Plaintiffs’ complaints state plausible claims upon which relief can be granted and should be permitted to proceed in the litigation,” he wrote in a 125-page opinion. “However, a preliminary injunction is an extraordinary remedy to be granted in this circuit only upon a ‘clear showing’ of entitlement…. Even assuming Plaintiffs are likely to succeed on the merits, they have not demonstrated they are likely to suffer irreparable harm—a necessary prerequisite for preliminary relief—before trial in the absence of an injunction.”

Basically, Schroeder, a George W. Bush appointee, said that even if African-American voters face burdens as a result of the new restrictions, they will still be able to openly participate in the electoral process and will not face “ an inequality of opportunity to vote.”

It’s important to note that this is just a preliminary opinion and the outcome was not surprising. The most contentious aspect of the law—the requirement that voters produce specifics forms of government-issued ID to cast a ballot—doesn’t go into effect until 2016 and was not the focus of the injunction pleadings. In April, a federal judge in Wisconsin blocked the state’s voter ID law under Section 2 of the VRA following a full trial.

As I wrote following the four-day hearing in Winston-Salem last month, it’s very possible the plaintiffs could lose the preliminary injunction hearing and win the trial in July 2015, when they’ll have more time, more expertise and more evidence, like voter ID, to draw on. It’s tougher for plaintiffs to win a preliminary injunction than a full trial, especially in an off-year election when voter turnout is lower and restrictions on voting are perceived as less costly.

That said, this is a significant opinion, and one that shows why Section 2 of the Voting Rights Act is no substitute for Section 5. Indeed, North Carolina is the perfect case study for what happened after the Supreme Court gutted the Voting Rights Act. (If the ruling leads to diminished voter turnout, particularly among African-Americans and young voters, it could also swing the close Senate race between Democrat Kay Hagan and Republican Thom Tillis, which could very well determine which party controls the Senate next year.)

Let’s review the legislative history. In April 2013, the North Carolina House passed a sixteen-page voter ID bill that required a government-issued photo ID to cast a ballot, but also accepted student IDs from state universities and public employee IDs. The bill languished in the North Carolina Senate until the Supreme Court overturned Section 4 of the VRA, freeing states like North Carolina with the worst history of voting discrimination from having to clear their voting changes with the federal government under Section 5.

“It was a 90 percent different bill,” testified Representative Rick Glazier, a Democrat from Cumberland County. “It was an ambush on the people of North Carolina.”

The Senate took only two days to debate the new bill, which repealed or curtailed nearly every reform that encouraged people to vote in the state. The House passed the Senate’s version in a matter of hours, with no amendments offered or public input. “It was, bar none, the worst legislative process I’ve ever been through,” Glazier said. “If you were writing a textbook on legislation, this was a textbook example of how not do it.”

Not only did North Carolina no longer have to approve its voting changes with the federal government thanks to the Supreme Court’s decision, the burden of proof shifted from the state to the voters most impacted by the law, as did the legal standard needed to show discrimination under the VRA. “You have the burden of showing clear evidence,” Judge Schroeder reminded the plaintiffs several times during the hearing.

But under Section 2, plaintiffs have to show that the “totality of circumstances” leaves a minority group with “less opportunity than other members of the electorate to participate in the political process.” The simplicity of Section 5 has been replaced by the complexity of Section 2. What would have been a slam-dunk case for the government and civil rights groups is now a long slog, with a very uncertain outcome.

As Judge Schroeder noted in his opinion, “Vote-denial claims under Section 2 have thus far been relatively rare, perhaps due in part to the fact that since 1965, many jurisdictions—including many North Carolina counties—were under federal control and barred from enacting any new voting procedure without first obtaining ‘pre-clearance’ under Section 5 of the VRA from the DOJ or the United States District Court for the District of Columbia.”

“If this ruling stands,” wrote Rick Hasen, “it shows that Section 2 and the Constitution’s Equal Protection Clause are poor substitutes in protecting voting rights for Section 5 of the Voting Rights Act.”

Members of Congress introduced legislation in January to resurrect Section 5. The Voting Rights Amendment Act of 2014 has 171 co-sponsors in the House, but no Republican co-sponsor in the Senate. There is little urgency in Congress to pass it. In a perfect world, this week’s North Carolina ruling would change that.