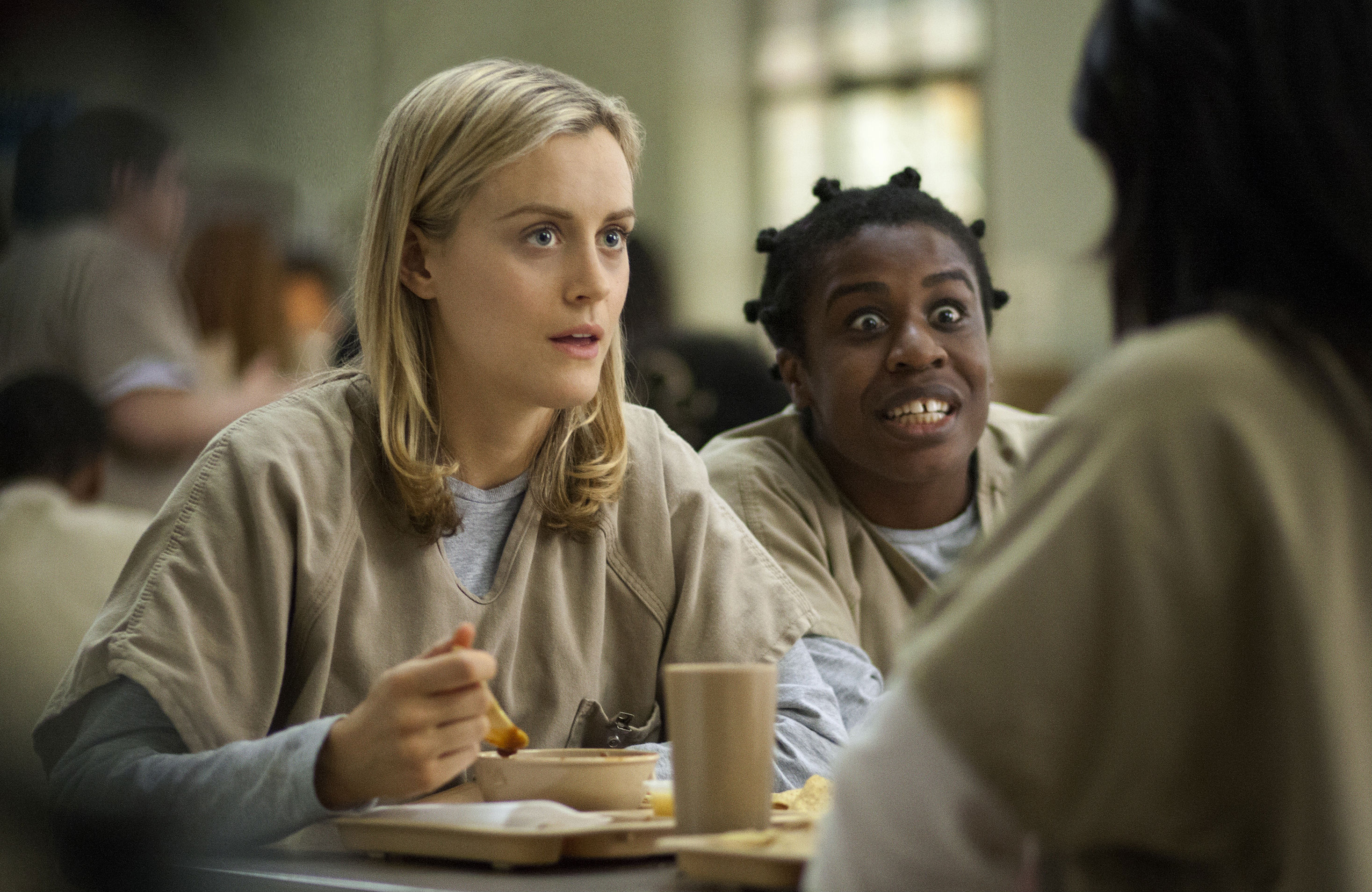 Last year, Orange Is the New Black became one of my new favorite new shows by diving—headfirst—into a great unknown. A TV series ostensibly about a white, upper-middle-class, bisexual Smith graduate serving a thirteen-month sentence for money laundering and drug trafficking dared to delve into the backstories and inner lives of women of color—and not only that, but women of color who are facing years of prison time.

This season, creator Jenji Kohan fades the first-season protagonist Piper Kerman (played by Taylor Schilling) even further into the background, thus giving its diverse ensemble of actresses an even bigger opportunity to wrestle with the complex layers of race, sexuality and class that make up their worlds, and ours.

Sure, part of the appeal of OINB is its binge-worthiness. Combine character depth and a rewarding sense of closure and I, despite my 2-year-old, will find time to watch something that lasts for twelve and a half hours in a day! But the show’s real seduction has always been that it lets me, as an African-American woman, see some semblance of myself in its characters: in other women of color, in incarcerated women and in queer and transgendered women that the rest of society has chosen to ignore or render invisible.

This power is not OITNB’s alone. The politics of recognition and representation are powerful to many, so much so that the reality of the first African-American president and the idea of the first woman president sometimes act as a stand-in for real policies to end gender and racial disparities. When Harry Belafonte called for artists to engage in more political action, Jay-Z responded with a succinct rebuttal: “My presence is charity. Just who I am. Just like Obama’s is. Obama provides hope. Whether he does anything, the hope that he provides for a nation, and outside of America is enough.”

Meanwhile, television shows like Scandal, Being Mary Jane, Devious Maids and, to a lesser extent, Mistresses, all showcase diverse casts. (Some of those shows have courted their own controversies about propping up racial stereotypes, demonstrating that diversity alone is no guarantee of thoughtful engagement with race as a subject.) OITNB, meanwhile, sets itself apart, literally, by taking place in a women’s prison. And for me, that distinction comes with an added burden and moral authority: the show should not simply be diverse (though that is a feat unto itself). It should help us imagine a different world—not only for its fictional characters but their real world counterparts, too.

The basic conflict this season, in which authority is pitted against political idealism, however, is quite familiar. In Litchfield Penitentiary, authority gets turned upside down and idealism is squeezed out. This is most explicit in the power play between the corrupt prison assistant warden, Natalie “Fig” Figueroa (Alysia Reiner), and her ambitious and sometimes well-meaning second-in-command, Joe Caputo (Nick Sandow). They disagree often over the prison budget; is Fig willing to spend enough to fix one of the prison’s bathrooms, now flooded by sewage waste and feces? Caputo wants the situation remedied immediately; Fig redirects the funds to her husband’s campaign and hires shady contractors. By the end of the season, Caputo, with Piper’s help, exposes Fig’s embezzlement, but not without demanding oral sex from Fig in exchange for keeping mum (once she complies, he reveals that he’s already turned her in).

But the season’s best battles are saved for Red (played wonderfully by Kate Mulgrew), the former head chef of the prison kitchen and leader of the all-white group known as “Red’s girls.” Red spends the season hustling her way back up to the top of the prison pecking order. Standing in her way are several factors: she’s older; her former assistant cooks have betrayed her; she doesn’t have any contraband goods; but most importantly, Yvonne “Vee” Parker (a masterful Lorraine Toussaint), a drug dealer who grooms children in foster care to work for her, has arrived.

We quickly learn that Vee is a threat to Red because they have a longstanding feud from a previous era: when a younger, more naïve Red first got locked up at Litchfield. At that time, African-American women like Vee ran the prison. Now, facing a new pecking order, Vee uses all the devices at her disposal—fear, manipulation, and even lethal force—to seduce the younger African-American women into submission and the other inmates into using drugs.

Through Vee’s steady climb to authority, OITNB puts racial hierarchies in relief. Part of her appeal to Tasha (Danielle Brooks), Crazy Eyes/Suzanne (Uzo Aduba), Janae Watson (Vicky Jeudy) and Black Cindy (Adrienne C. Moore) is racial pride; she constantly reminds them of her own golden era—in which African-American women like Vee garnered respect because they supplied drugs and goods to other inmates—while revealing how little they matter in theirs. But like everything else Vee does, her politics are a ruse, her solidarity a sham, and her sociopathic entrepreneurial behavior appears to be the real danger to Litchfield’s social order and safety.

Her presence convinces the audience to cheer for her downfall, root for Red and want everything to go back to the days in which Red’s all-white crew was dominant or at least, last season, when the racial hierarchies of prison mirrored those on the outside.

Vee eventually meets a tragic and well-deserved end, but with it comes an even bigger question: will the other African-American inmates resume their place at the bottom of Litchfield’s ladder? The notable exception to this is Sophia (glamorously played by Laverne Cox), whose transgender identity and hairstyling skills seem to afford her the luxury of racial fluidity. She is not a member of any racial gang and is one of the few characters who get along with everyone. But because she exists outside of all groups in a prison system that thrives on racial classification, she is not a threat to Vee, Red or the racial hierarchy itself. One of the real shortcomings of this season is that she, like Piper, seems to have receded in the background, despite Cox’s landing the cover of Time magazine.

Political idealism is the biggest threat the social order at Litchfield. Piper no longer has any; Vee takes advantage of it with her crew; and the show’s newest character, the Asian-American biracial character, Brooke SoSo, a former Occupy Wall Street protester who tries to organize her fellow prisoners, emerges as the prison jester.

She doesn’t intend to be the butt of the joke. Like Piper did last season, she is importing her own brand of progressive politics into an institution that necessitates conformity and breeds dehumanization. She doesn’t get very far. When she and four other women present the administration with their demands, they’re a mixed bag: humane living conditions, an end to the use of solitary confinement for no reason, and better maple syrup. Political idealism in OITNB is source of sympathy and humor, but the funnier I found SoSo’s ineptitude, the less I believed that things could change.

Toward the end of the season, Piper considers exposing Warden Figueroa’s embezzlement to a journalist. He tells her that he’s only interested in a story about corruption, not about the inhumane conditions the inmates face. Nobody, she learns, gives a shit about the real problems these women face. So Piper gives the dirt to Caputo, bargains with him to not be transferred to Pennsylvania, and takes down Figuero, all without any hope of making a big difference.

And that was my final takeaway from the season. This show has never been about dismantling those systems of power, inside and outside of prison, that separate so many women, especially African-American and Latina women, from their lives and families. It neither preaches mass reform of the prison system nor presents us with viable alternatives. In this way, OITNB is not political art, and most definitely pure entertainment.

By making political idealism and its sister, organizing, a gaffe, OITNB ignores the many ways that women resist their confinement. After watching this season, I reached out to Tamar Kraft-Stolar, the Women in Prison Project director at the Correctional Association of New York and a friend of mine, to ask about her experiences organizing with incarcerated women. She replied:

“Women work against the dehumanization of prison in many ways, sometimes subtle, sometimes overt, sometimes individual, sometimes collective. From speaking out to change punitive laws to sending letters to their children, and everything in between. We consider all these actions to be forms of feminism—because, in ways big and small, they uphold the basic human dignity and rights of women, and they are part of creating a world where women have agency, and are valued.”

Some of this we see happen on OITNB. But, for the most part, the show treats political idealism—be it for racial equality or gender equity—as peril or parody. And that’s where the show’s seductive power lies: it does not push us to challenge the unjust policies and laws that lock up women for problems that are social and economic, not criminal. And maybe that’s why we keep watching. We like the show, we enjoy the characters’ antics, we have fun with these women as an ensemble—and the place where it’s all happening is prison.

In the final episode, Soso intervenes in a tense argument between inmates by asking for unity: “We should be leaning on each other, finding support in our fellow criminals so we are not isolated. I need a friend.” The women stop bickering, chuckle, and tell her they already have friends. And though her plea falls flat, Soso’s idealism is no joking matter, and maybe it could inspire us to do more than look on. Art, after all, can lead to political transformation. As Kraft-Stolar says, “To truly make the changes we need, people will have to go beyond understanding that orange is the new black to understanding that razor wire is the new red, white and blue. And that until we reverse course in our incarceration nation, women will never achieve justice or equality and none of us will ever truly be free.”