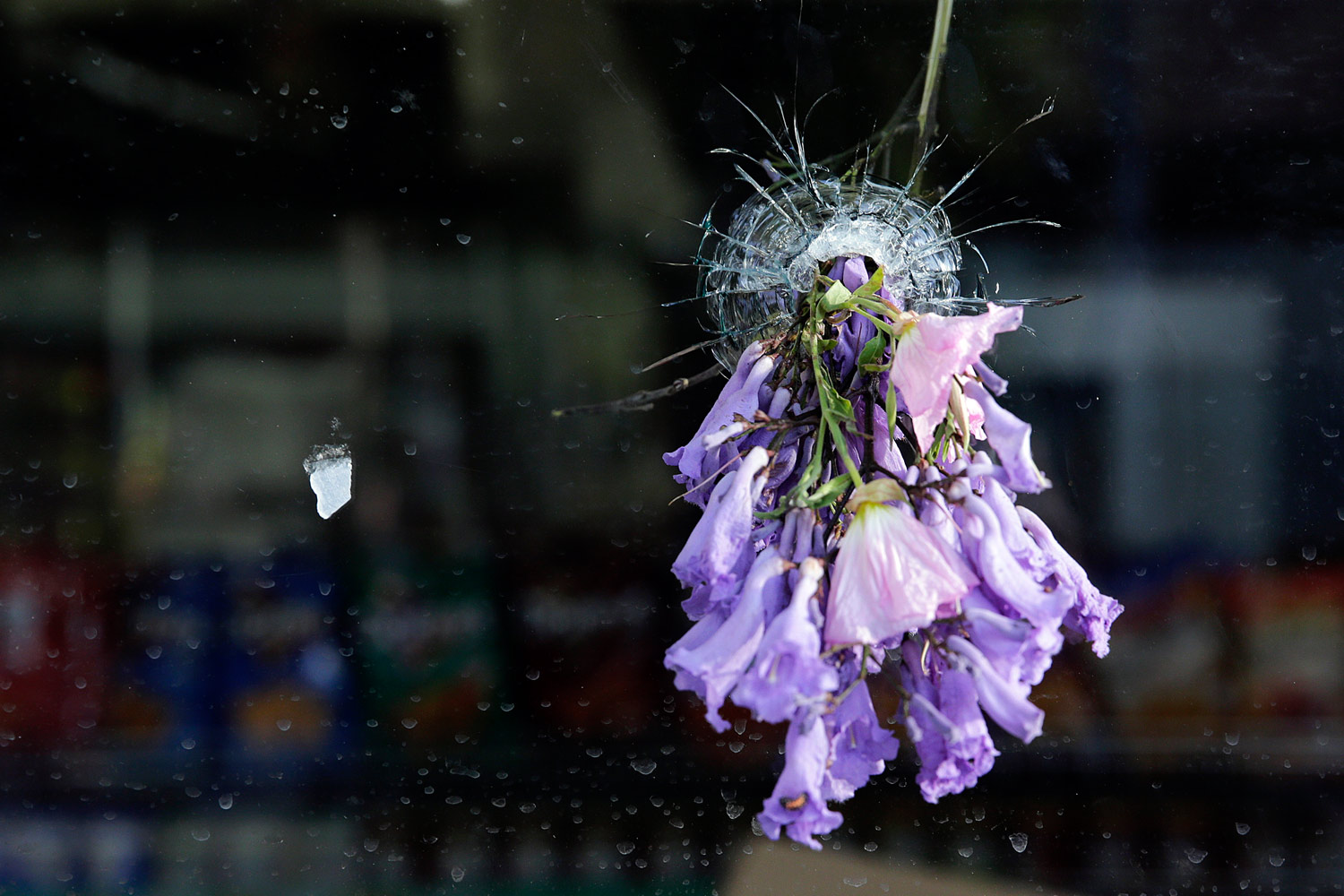 Flowers in a bullet hole on a window of IV Deli Mart in Isla Vista, California. (AP Photo/Jae C. Hong)

On May 23, 22-year-old Elliot Rodger stabbed three men to death in his apartment and then went on a shooting spree that killed three more people, injured thirteen and ended with his suicide. Before leaving a trail of carnage and grief across Isla Vista, California, Rodger went to great lengths to create a digital record of his alienation and rage, most of which was directed at women, who he believed had sexually rejected him. There’s a 140-page autobiography titled “My Twisted World: The Story of Elliot Rodger”; a chilling last video, “Elliot Rodger’s Retribution”; and a stream of comments on bodybuilding websites and the now-defunct PUAHate.com, a forum for men who have grown disenchanted with the so-called PUA or “pickup artist” community. Thanks to profiles in The New York Times and other outlets, we now know about Rodger’s troubled psychiatric history and his parents’ repeated efforts to get him help, including a phone call that his mother made to the police last month to inform them of a disturbing video that suggested, at the very least, that Rodger might be a danger to himself.

In this latest tragedy, there is something or someone for everyone to blame. Armchair psychologists have diagnosed Rodger with mistreated autism, pathological narcissism, depression, anxiety, psychosis, paranoid schizophrenia or bipolar disorder. Fox News’s Rick Sanchez pronounced him “just plain crazy.” Explanations have been written about the laws regarding involuntary commitment. Critics have faulted the self-help book The Secret (which Rodger had read), the muscle-building supplement creatine (which Rodger had taken) and white, upper-class privilege (which Rodger, who was of Chinese and Caucasian descent, either embodied or was alienated from, depending on whom you read). A spotlight has been cast on what looks like poor police work—despite being alerted by Rodger’s mother, the cops neglected to view his videos or to check whether he’d purchased firearms. Washington Post film critic Ann Hornaday wondered if the “sexist movie monoculture” epitomized by Judd Apatow bro flicks set the stage for Rodger’s rampage. Jeopardy champion Arthur Chu indicted the hackneyed Hollywood scripts in which nerdy guys lust after unattainable hot chicks. Glenn Beck blamed World of Warcraft, which Rodger played—a lot. The New York Times’s Ross Douthat wagged his finger predictably at feminism and its complicity with the sexual revolution’s ethos of “Hefnerism,” which he claims has led to the near-hegemonic belief that “sexual fulfillment is…the source and summit of a life well lived.”

Some of this commentary is on point, but much of it seems desperate to talk about anything but the most obvious issues: Elliot Rodger’s hatred of women, and his unfettered access to the guns and ammunition needed to commit this atrocity.

Our response to these two distinct but related problems has been revealing. Confronted with something so globally pervasive and entrenched as male sexual entitlement, feminists have met the challenge with gusto. A woman by the name of Kaye M. started the hashtag #YesAllWomen, which explosively raised our consciousness about the routine dehumanization and violence directed against women. Feminist writers like Amanda Hess, Jessica Valenti, Amanda Marcotte, Laurie Penny and Rebecca Solnit (whose new book Men Explain Things to Me should be mandatory reading) forcefully explained how misogyny can kill. Underneath the understandable frustration and righteous anger, a sense of optimism and empowerment prevailed.

In contrast, when it comes to something much more modest—passing the kind of rational gun policies that are the norm in every other industrialized nation—the US public’s response is best summed up by an Onion headline: 'No Way to Prevent This,' Says Only Nation Where This Regularly Happens. Historians may look back at this moment and say that the American public took stock and judged misogyny to be the more tractable problem. And they would be right.

It’s not that the feminist response to Isla Vista is misdirected. The question is why, at an equally critical moment in the national discussion about guns, the voices of gun-control advocates—with the exception of Richard Martinez, whose son was killed by Rodger—have been comparatively inaudible. The push for gun-law reform in the wake of the 2012 Sandy Hook massacre has not only vanished at the federal level; it’s been reversed in many states. Since that tragedy, state laws expanding the rights of gun owners outnumber those that impose new restrictions. Several state legislators who backed successful gun-control laws were subsequently defeated with the help of the National Rifle Association. Thirty-one states now allow the “open carry” of guns without any special license or permit; twenty-three states have “stand your ground” laws of the type used by George Zimmerman to defend his killing of Trayvon Martin; thirteen states allow people to carry concealed weapons in bars; and nine states allow concealed weapons on college campuses. And a week after Rodger’s Isla Vista rampage, Texas Senator Ted Cruz, speaking at the Republican Leadership Conference (where he won the 2016 presidential straw poll), mocked gun control as “real simple—that’s hitting what you aim at.”

There is one bright light in this grim landscape. As Dahlia Lithwick points out on Slate, the movement to pressure businesses into denying service to gun nuts who flaunt their weapons under open-carry laws is gaining traction. Chipotle was the first to tell its customers to leave their guns at home. Sonic and Chili’s have followed suit; Jack in the Box and Home Depot may do so as well. And while “Chipotle to the rescue!” is hardly an inspiring rallying cry, one has to start somewhere. If the NRA and its allies can’t, for the moment, be consistently defeated in terms of whip counts and votes, they can, at the very least, be publicly shamed.