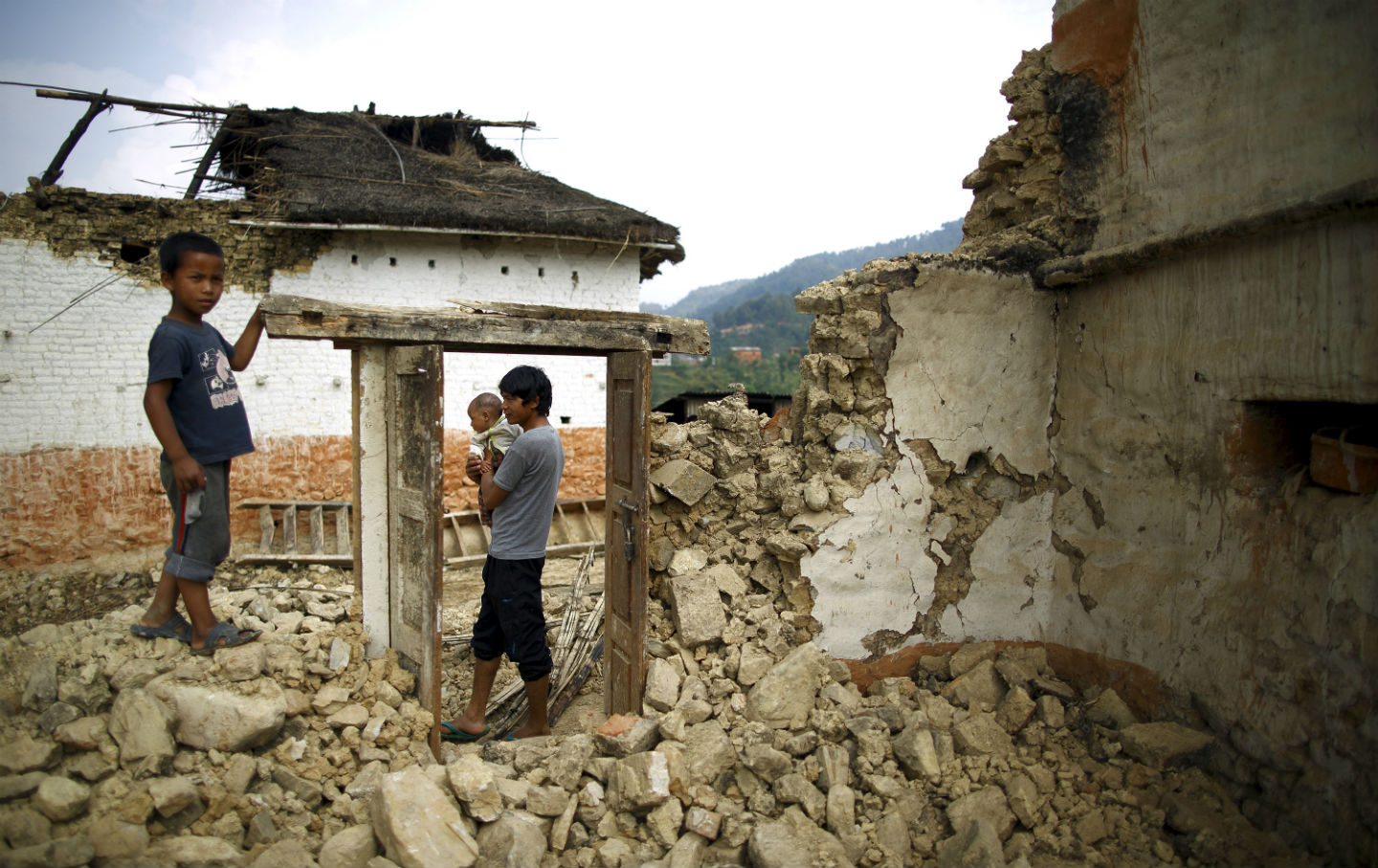 Earthquake victims stand near a damaged house after the April 25 earthquake in Nepal on May 8, 2015. (Reuters/Navesh Chitrakar)

The earthquake last month left countless families in Nepal homeless. But for about 2 million Nepalis, the displacement began long ago, when they were driven by economic hardship to seek jobs abroad at construction sites, salons and households. Now the fallout of globalization is deepening their communities’ devastation.

About one-third of Nepali households, according to the United Nations, “have at least one member working and living abroad.” Migrant income remittances contribute about 30 percent of GDP. Many work in neighboring India; others labor in Middle East construction zones, where they face brutal exploitation, or in New York, where their wages are stolen in the underground service economy. The people these workers support, including the elderly and children, are in many cases facing the disaster’s aftermath on their own. That’s because Nepal’s overseas workers face extreme pressure, from employers and economic barriers, to stay away.

Another catch-22 that keeps migrants stuck abroad is the debt cycle, as they are coerced into paying recruiters usurious fees to secure harsh, exploitative jobs. In the Gulf nations, laws known as the kafala system bond indebted workers to their employers, making migrants unable to leave the country without the boss’s permission. With high poverty and low literacy rates, Nepalese migrants often face labor and sex trafficking, lethal accidents (many have died on construction sites) and sexual abuse (with domestic helpers sometimes working in virtual captivity)—while their incomes are still not enough to lift their communities out of poverty. But often youth, especially those in rural areas, have little choice but to migrate, since Nepal’s longstanding civil unrest and uneven neoliberal development have thwarted stable job growth.

The International Trade Union Confederation has pressed the governments of Qatar and other Gulf states to offer temporary “amnesty” from kafala. But General Secretary Sharan Burrow says via e-mail that as of Friday, Qatar has not lifted kafala restrictions, so workers face dire consequences should they try to escape home.

We have been told that most of the workers our contacts on the ground have spoken to have been prevented from going home because of the laws…. Other workers who have been granted an exit permit, have had to pay from their own pocket to get flights home. In a country where the average wage for Nepali workers is $200 a month—this is a huge barrier.

Those who risk journeying home may be driven more by emotion than by economics: One worker, who paid for his own trip after wrangling a 45-day emergency leave from his boss, told the Los Angeles Times: “I was under so much stress, I couldn’t work for the last week…. My family was overwhelmed, my child is traumatized, my father is elderly—I had to get home.”

But the costs of return may outweigh the benefits. At Adhikaar, a New York–based labor advocacy group and community space serving the Nepali immigrant community, members struggle with the reality that returning now just doesn’t make sense, despite the stress of separation from loved ones who may be traumatized or still missing.

Social worker Raji Pokhrel says that in her group’s network, which includes many poor women domestic workers and nail salon workers, “Everyone wants to go back, but sadly, this is when the families might need money. So for some of our members, leaving and quitting your job and going back, it won’t be beneficial. So, it’s emotional, too. [People are] wanting to go back home, but then, thinking, ‘Okay, I need to keep this job in order to continue to be able to support my family.’”

Many in their community are undocumented, or tied to restrictive work contracts, so if they return they may never be able to re-enter the United States or regain sorely needed jobs. Adhikaar is campaigning to pressure the government to provide Temporary Protected Status for Nepalis in the US, which would grant temporary relief due to the disaster. But the more fundamental question is simply whether it’s worth it to return to a shattered country that lacks jobs and basic infrastructure even during normal times.

“It’s a heartbreaking situation,” says Pokhrel, who worries about her family back home, too. Weighing the risks of returning, workers may think, “Is it even going to be useful? It’s better for me to stay here, but then, thinking of your children…. It’s something that we’re all facing.”

“Like other countries, Nepal has seen migration as…an easy way out of poverty and a valve to release social tensions,” says International Organization for Migration Director of Mission in Nepal Maurizio Busatti. Remote, impoverished communities hard hit by the quake had already suffered from a hollowing of the population through internal and transnational migration. This demographic drain not only limits the labor pool for rebuilding, but intensifies rural-urban inequality. “The time is now really to avoid leaving the country completely wiped out of it’s most needed human resources,” says Busatti. “The question is creating opportunity that might convince people to stay.”

Though humanitarian efforts have been lagging—hobbled by dysfunctional government and a chaotic flood of aid deployments—the recovery itself could lay a new economic foundation. While relief work is by nature a temporary industry, Busatti noted, organizations could at least offer paid jobs to local workers for immediate cash relief. Or international institutions could help coordinate a financial structure for channeling remittances into long-term projects based on community-driven development, rather than just immediate household needs.

Yet the deepest lack in Nepal’s recovery effort today may be the social gap left by its youth exodus; they’re now adrift between frustration abroad and tragedy at home. “Every family has people abroad,” Pokhrel says, “so Nepal is losing out on a lot of young people in our country.”

Though migrant workers were fortunate to avoid the quake, they’ve long suffered the rupturing shocks of global capitalism. So outside the disaster zone, it is still left to the migrants to keep digging their country out of an even deeper mess.