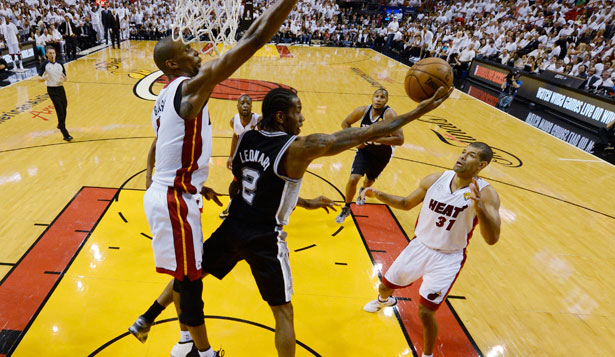 It seems that NBA owners thirst for the blood of their players. Unlike vampires of yesteryear, they don’t want these precious fluids for personal sustenance. Instead, it’s for the health and vitality of their billion-dollar franchise investments. According to an article in ESPN The Magazine the owners want the blood of their athletes and some may already be harvesting.

This isn’t blood testing to see if players are taking performance enhancing drugs. It’s actually the opposite. It’s blood testing—along with 24-7 monitoring—for the purposes of building a better basketball cyborg. The article, cowritten by Pablo Torre and Tom Haberstroh, outlines the new ways that teams “scrutinize, optimize and fundamentally think about their players.”

They then outline the neoliberal fever dream that animates the NBA’s new generation of billionaire hedge fund managers and tech innovators who see their players’ bodies and by extension their private lives as just another asset in their portfolio.

Owners “have discovered how to leverage new, ever-shrinking technologies to supervise a player’s sleeping habits, record his physical movements, appraise his diet and test his blood.” Torre and Haberstroh then point out wryly, “In automotive terms, the league is investing in a more accurate odometer.”

What is particularly disturbing is the execs who are proudly gushing about this new normal. Dallas Mavericks owner Mark Cuban is one of them. The billionaire with a yacht named after Ayn Rand’s The Fountainhead told Torre and Haberstroh, “I think the smartest thing we do for health from a data perspective is take ongoing assessments and even blood tests so we have a baseline for each individual that we can monitor for any abnormalities. When someone is ill, we know what their numbers should be.”

Does he mean their health numbers or in-game numbers? In the context of the article, it’s not clear. What is clear is the quote from former Mavs guard Devin Harris who said, “I don’t know what they do with it once they have it, but they definitely take it. And I know they talked about taking blood throughout the season for certain stuff.”

The words of executives reveal an NBA where players’ bodies have been further “thingified” over the last ten years, transformed in the eyes of ownership from “malice in the palace” thugs, in need of a dress code and charm school classes, to human hosts of optimal basketball nutrients.

Sacramento Kings General Manager Peter D’Alessandro is all-in on these new practices. “The holy grail,” he says, “is sequencing and understanding the genome. And how that relates to pro athletes on an injury basis and who’s naturally good at certain sports.”

D’Alessandro also says, “We need to be able to have impact on these players in their private time. It doesn’t have to be us vs. you. It can be a partnership.”

That talk of partnership sounds lovely, but the first time the National Basketball Players Association had even heard about the NBA’s 24-7 biometric monitoring agenda, was—remarkably—when ESPN was researching this article.

NBPA counsel Ron Klempner said, “If the league and teams want to discuss potentially invasive testing procedures that relate to performance, they’re free to start that dialogue and we’ll be glad to weigh the benefits against the risks…. We’ve barely left the starting line on these issues.”

The NBPA faces this now with a recently hired executive director in Michelle Roberts, and the news that the league had signed a new staggering $24 billion television deal with ESPN and TNT. As franchises get sold for record prices, players are seen as “partners” in the way Poland was a “partner” in the US war on Iraq. The players’ powerlessness—not their partnership—has been the prerequisite to these exploding franchise values and, not incidentally, the ways that players are being treated like genetically modified sides of beef.

All-star Andre Iguodala made it plain, saying, “I just hope we don’t become robots, where they’re feeding us the same thing, every day, and then it’s time to flip the switch and go to sleep.”

This is a beautiful game. If we don’t want it to become a cultural symbol of a world where some workers are deemed disposable and others are genetically honed it to perfection… a symbol of a world where billionaires sit in the front car of the snowpiercer toasting their good fortunes as the neoliberal kings of this monstrous distortion of human interaction, then the union is going to have to stand up. They won’t need garlic and a wooden stake, just some damn backbone to stand up to the collection hedge fund harvesters and say that they demand ownership of their own humanity.