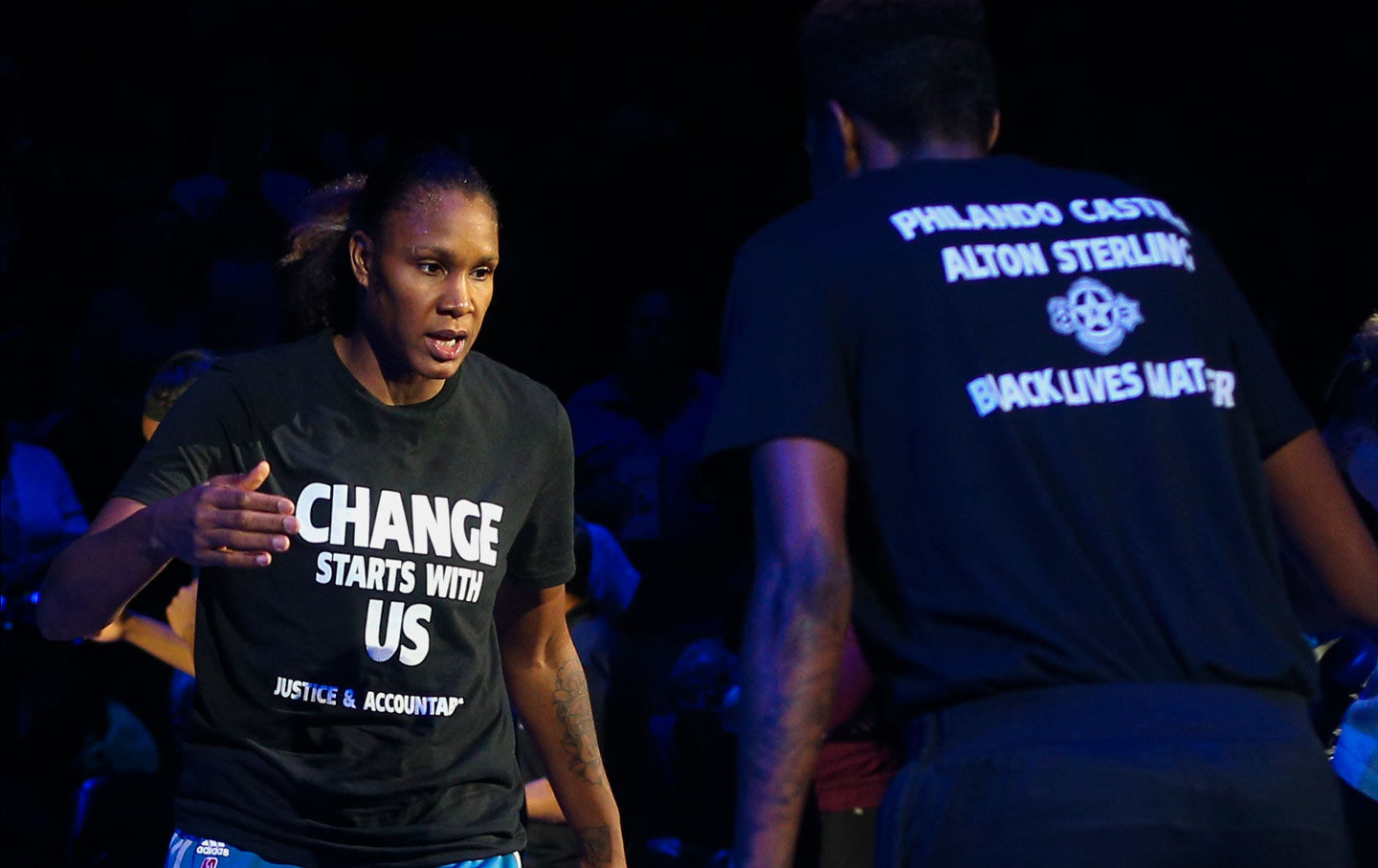 Although they weren’t fined, the Minnesota Lynx were one of the first teams to wear shirts protesting the recent violence. (Timothy Nwachukwu / Star Tribune via AP)

NBA Commissioner Adam Silver has made two decisions this week: one courageous, and one craven. These are two decisions that seem like they should be coming from diametrically different people. Instead, they are coming from the same mouth. The two decisions, however, tell us a great deal about a commissioner who is a canny political operator. They are also instructive about the current balance of forces in two central movements for social justice.

The more high-profile decision Silver made was his call to move the 2017 All-Star Game from Charlotte, North Carolina, because of the state’s draconian “bathroom bill” that prohibits local municipalities from passing ordinances to protect the rights of lesbian, gay, bisexual, and transgender people. People can read the full statement from Silver here.  It absolutely should be celebrated that Silver stood by the league’s “principles of diversity and inclusion” and chose to actually risk a backlash over these principles. I wrote in March about why it was critical for Silver to not let pass this opportunity to actually stand for something.

The second decision, arriving with far less publicity, was the one to fine players in the WNBA for wearing shirts against both police violence and violence against the police. These shirts were emblazoned with the names Alton Sterling and Philando Castile, in addition to a Dallas badge. They also read #BlackLivesMatter and #Dallas5. When the league sent out a memo warning players to not wear political slogans, the New York Liberty, Phoenix Mercury, and Indiana Fever switched to wearing just plain black T-shirts with nothing but an Adidas logo.

In a statement issued to the Associated Press and then copied and sent to us at The Nation, WNBA president Lisa Borders said, “We are proud of WNBA players’ engagement and passionate advocacy for non-violent solutions to difficult social issues but expect them to comply with the league’s uniform guidelines.”

These fines were issued on Wednesday. Then, as fate would have it, the New York Liberty played the Indiana Fever on Thursday. Players decided to wear the original shirts bearing the names of Sterling and Castile, in protest of all possible fines. Liberty star Tina Charles then accepted her WNBA Player of the Month award with her warm-ups turned inside out. Afterwards, she wrote the following on Facebook:

Today, I decided to not be silent in the wake of the @wnba fines against @nyliberty, @indianafever & @phoenixmercury due to our support in the#BlackLivesMatter movement . Seventy percent of the @wnba players are African-American women and as a league collectively impacted. My teammates and I will continue to use our platform and raise awareness for the #BlackLivesMatter movement until the @wnba gives its support as it does for Breast Cancer Awareness, Pride and other subject matters.

After the game, Liberty players Charles, Swin Cash, and Tanisha Wright spoke to the press. People should read their stirring statements, transcribed by Deadspin here.

To be clear, Lisa Borders may have issued those fines, but they don’t happen without the approval of Adam Silver. Sure enough, when we reached out to the WNBA for comment, it responded with quotes from a transcript of a press conference recently given by Silver where he said, “I am absolutely in favor of players speaking out and speaking from the heart about whatever issues are important to them [but]….[t]o use…a game, pregame, as a political forum, I think it’s a dangerous road for us to go down. So I would greatly prefer that the players use the platform they’re given, social media, press conferences, media in locker rooms, however they want to do it, to make their political points of view be known.”

So Adam Silver can use the NBA All-Star Game as a place to make the political views of the league known, but players can’t use their pregame warm-ups to speak to an issue that intimately affects their lives? On paper, this looks like a breathtaking double standard, or at least a confused contradiction. But it makes sense if you understand that standing up to this North Carolina law isn’t just the right thing to do. It’s smart for a league that wants to market itself as young, LGBT friendly, and willing to stand up for those being demonized by the state’s execrable governor, Pat McCrory. The NBA is now costing the state of North Carolina tens of millions of dollars by pulling the game. But its own risk is minimal.

To stand with #BlackLivesMatter and to sanction the use of the court as a political space, holds a great deal more risk. You risk alienating white fans. You risk police walkouts, which took place in Minnesota when off-duty police hired as WNBA security walked out of the arena when they saw shirts that said #BlackLivesMatter. But for Silver, these aren’t the only risks. To hand over political ownership of the court to players means that the league cannot control its carefully crafted image. The most important media message is what takes place on those 94 feet of hardwood, and the league will never surrender that space without a fight. But by cracking down, Silver has invited a different kind of risk: the risk that his every dictate will not be meekly accepted and that this fight for the court will now be joined.

In an odd way, we should be grateful to Silver for his hypocrisies. By resisting this crackdown, players like Charles are only giving this cause a higher profile. By assuming risk, they are making it matter. They are also setting a strong precedent that will inspire NBA players dipping their toes into these waters. Sure enough, New York Knicks forward Carmelo Anthony, upon hearing about the fines, said:

“I don’t see no reason to fine them. If anything you should want to support them. I don’t know details, but don’t see a reason to fine them… We did it [3 ¹/₂ years ago after the Trayvon Martin shooting]. The NBA did it. The NBA was very supportive. I don’t see any difference in this matter. Right now the players have a very strong stance in what they believe in right now. I don’t think anyone should be fighting that at this moment.”

I am sure Adam Silver and NFL Commissioner Roger Goodell will note Carmelo’s response and realize the following: If they crack down on athletes who stand with #BlackLivesMatter, don’t expect compliance. Expect defiance.