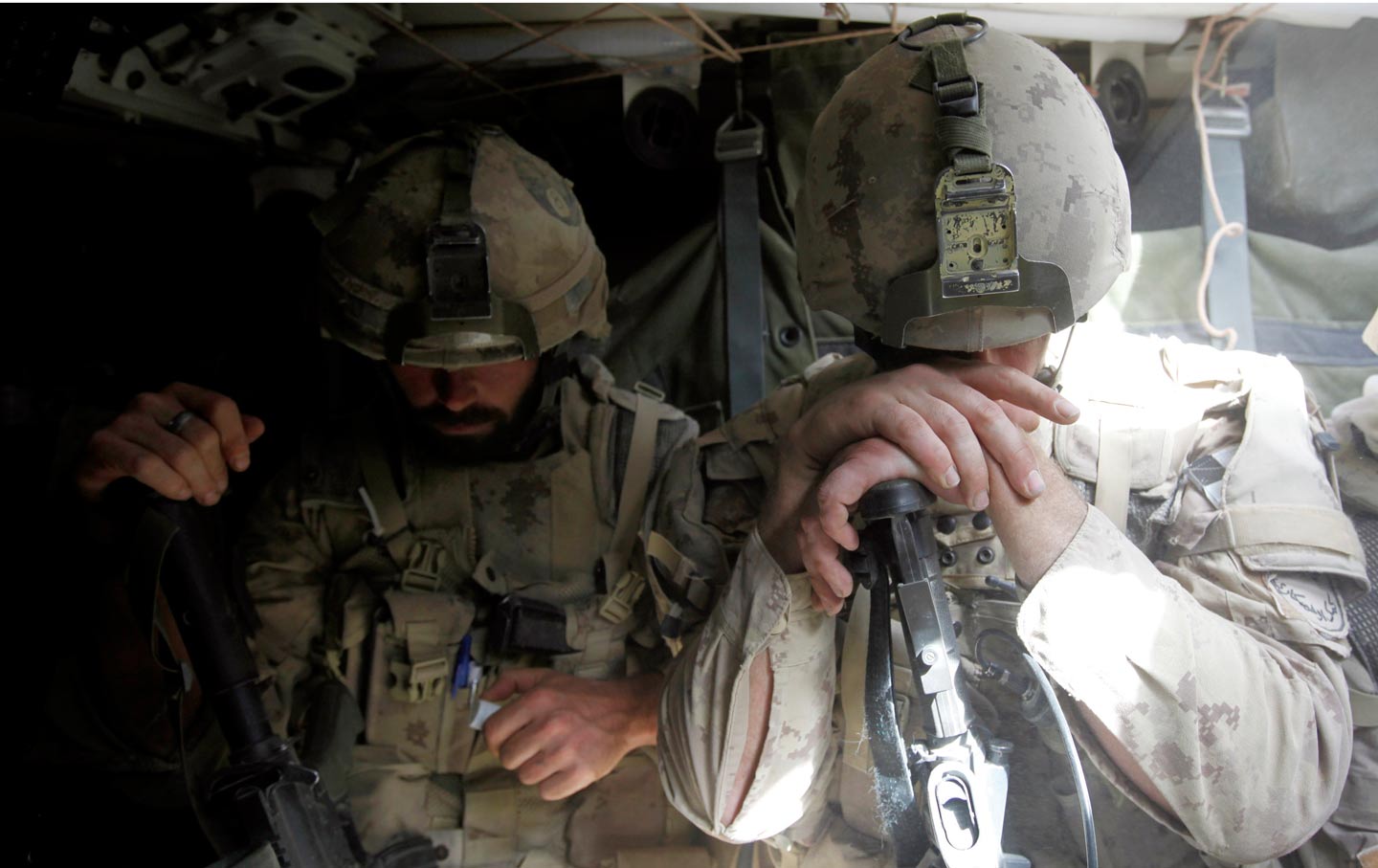 Solidiers rest in an armored vehicle after a mission in the Kandahar province of southern Afghanistan on March 20, 2009. (Reuters / Stefano Rellandini)

Hillary Clinton and Bernie Sanders have been wrangling over who is more qualified to be president. Amid the choreographed sparring, there is a story of substance that deserves recognition.

In an April 7 interview with Charlie Rose, Sanders was asked about his suggestion that Clinton should apologize for Iraq war deaths. He insisted that he was only responding to his opponent’s recommendation that he apologize for the gun violence at Sandy Hook. After further prodding, however, Sanders conceded:

“Do I bear responsibility for the tragedy and the horrors of Sandy Hook? So, you know, let’s get off of that. Of course she doesn’t bear responsibility. She voted for the war in Iraq. That was a very bad vote, in my view. Do I hold her accountable? No.”

The Vermont senator seems to have it backwards. To the extent that there is any evidence that either politician’s votes or public deliberations caused or contributed to either event, the laws of democratic vigilance require they be held to account. Others can navigate the gun-law debate, a conversation that is necessary and urgent. But when it comes to discerning the relationship between responsibility and foreign policy—policies that encourage a global arms trade of even more harrowing destructiveness than our domestic firearms market—allow me to speak from the heart.

I am a veteran of the Afghanistan war, where I served as a Marine signals-intelligence officer for about a year. For the first half of that year, I commanded roughly 80 personnel as the assistant officer in charge, and for the latter half I commanded roughly the same number as the officer in charge. During the course of my deployment, I engaged in a variety of activities ranging from mundane desk work to regular air and ground movements to occasional vehicle-mobile and foot-mobile combat operations. While I sometimes found myself caught up in fields and deserts full of improvised explosive devices (IEDs) or, in one case, an exposed firefight, I never pulled a trigger, never witnessed gruesome suffering or death to my immediate left or right, and never endured lasting physical injury myself. What I did endure, and continue to endure, is an overwhelming anguish that will likely haunt me for the rest of my days.

We all have our stories, and as with most profound things, they rarely accord with the clichés or tropes taught to us since birth.

I remember smoking and joking with a team of my Marines on a small outpost when two eruptions took place about a kilometer out. We received word that an explosive ordnance disposal (EOD) technician and a particularly beloved squad leader had just lost their legs, while another EOD tech was left with a marred countenance. A grunt from the fated patrol said to me: “He’s fine. Just some metal in the face.”

I remember plotting revenge that night with the company’s leadership, in which my team’s intelligence would drive operations. The objective was to impose maximum pain on the enemy, loosely defined.

I remember reading the translated and transcribed intercepts of that same vague enemy, and all the friendly (even endearing) banter those conversations entailed.

I remember a sea of boys approaching one of our seven-tons in a similar act of desperation. A disgruntled Marine yelled to chase them off with rocks, while another Marine held him back.

I remember finding myself in the rear of an armored vehicle and being tasked with ensuring a detainee’s hands remained gripped on the horizontal bar protruding from the back of the driver’s seat. He was a teenager, his wrists zip-tied and his eyes blindfolded. He was shrouded in an Afghan shawl and he was shivering from both the cold and the fright. I was advised to keep his forearms visible and poke at him whenever he attempted to cover them with this sleeves. He reminded me of my Marines and I eventually lost the will to continue the poking.

I remember a sniper telling me his team spent days sniping at anyone who approached the top of a hill known for insurgent activity. When I asked what his rules of engagement were, he said something to the effect of: “Sir, if anyone was on the hill, we took care of them.” When I pointed out that this amounted to a war crime if any of those “taken care of” were not in fact insurgents, which is why we require demonstration of hostile intent as one of the key triggers to any justified engagement, he implied that they’re all “hajjis” and they all support the “terrorists.”

I remember watching about a half dozen Marines unleash their fury on a village because stray rounds were heard popping near our base, the unit was about to head home, and there were weapon systems and ammunition yet to be deployed. First they returned fire with their M-4 rifles. Then the M249 light machine gun. Then the M240 machine gun. Then the MK-19 grenade launcher. Then the AT4 anti-tank weapon. Then the FGM-148 Javelin anti-tank missile. Then the vehicle-mounted BGM-71 TOW anti-tank missile. Spectators took out cell phones and videotaped the action. Could the Marines pulverizing the village have known something I didn’t know? I desperately want to think so.

The next morning, I remember at least one local approaching the base seeking reparations for a dead wife.

I’ve remembered so much and forgotten even more, but almost all of it has come with a throbbing sense of guilt—a guilt that often transmogrifies into an inward or outward rage that in turn verges on a sense of damnation. Not too long ago I experimented with psychedelics as a means of healing. It worked for the first few times, but the last attempt propelled me to an emergency room. The drug had induced a psychotic state in which everyone became a taunting demon. I was wholly alone, eternally damned, receiving my just deserts.

I’m hesitant to speak for anyone else, but I suspect I’m one of the luckier ones. My limbs are intact. My face is unscathed. I can work long hours and come across to most as a high-functioning member of society. My family and friends love and support me, I’ve been blessed with privileges of all kinds, and despite everything I’ve divulged thus far, I’ve learned to manage the darkness and find purpose and enjoyment.

What I can’t do—what I refuse to do—is to stop bearing responsibility for my past. And this means, most of all, conducting my life with that past in mind, as a catalyst to good works. My expectation for those in power is quite simply that they do the same, with the heightened awareness that their decisions have the capacity to save or ruin millions of lives just like my own, my fellow war fighters’, and the nameless multitudes we continue to war against.

If this seems like too tall an order, it might be wise to return to an earlier era when some national politicians were indeed willing to recognize unnecessary wars—the greater part of them have been proven unnecessary in retrospect—as something other than mere accidents. I’m reminded of George McGovern’s 1970 plea to end the war in Vietnam. Despite blind spots of its own, considering the astronomical suffering of the Indochinese people, the address still speaks to a moral imagination our public life has all but lost and, at this late date, has no choice but to regain:

There are not very many of these blasted and broken boys who think this war is a glorious venture. Do not talk to them about bugging out, or national honor or courage. It does not take any courage at all for a Congressman or a Senator or a President to wrap himself in the flag and say we are staying in Vietnam, because it is not our blood that is being shed. But we are responsible for those young men and their lives and their hopes. And if we do not end this damnable war, those young men will some day curse us for our pitiful willingness to let the Executive carry the burden that the Constitution places on us.

So before we vote, let us ponder the admonition of Edmund Burke, the great parliamentarian of an earlier day: “A conscientious man would be cautious how he dealt in blood.”

Whether or not Sanders holds Clinton accountable is not the point. While our leaders bear ultimate responsibility, it is for us, the supposedly sovereign people, to do everything we can to hold our legislators and diplomats accountable for the grave and terrible actions they have taken in our name. And above all, to hold ourselves responsible. If those decisions are not made democratically, then those of us who say nothing against them cannot escape blame.