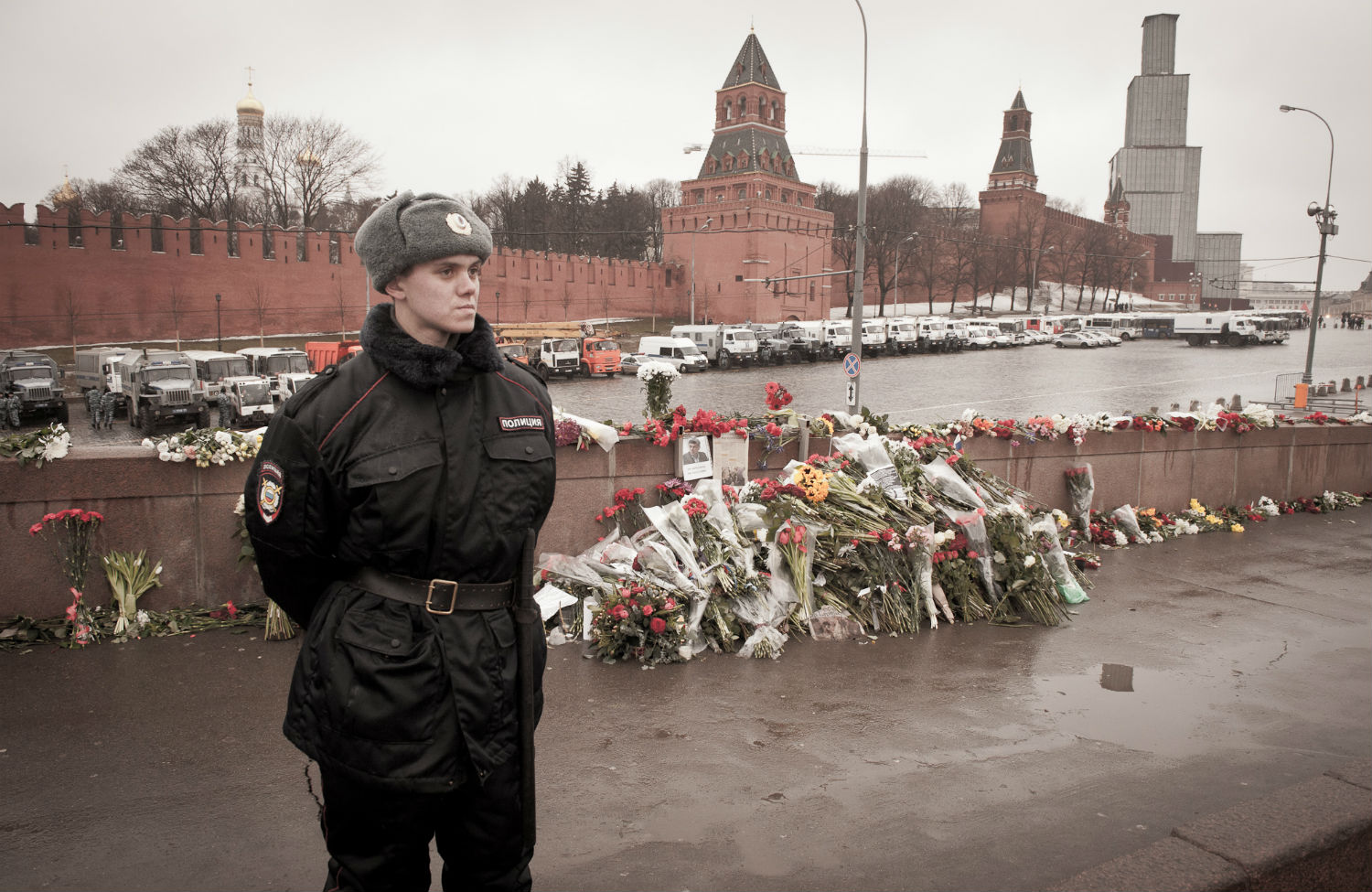 A police officer stands next to a memorial to murdered opposition leader Boris Nemtsov in Moscow, Russia. (Somiz, CC BY 2.0)

Boris Nemtsov was shot at the very moment when preparations for another march in Moscow by the Russian opposition were in full swing. Despite serious economic problems in the country, a massive public turnout to the protest was not expected, in large measure because the opposition leaders themselves were showing no interest in the social problems faced by the majority of Russia's people. While neo-liberal opposition figures had not expressed direct support for the austerity measures introduced by the authorities, they had not condemned these measures either. At best, the oppositionists had declared that the cause of all the difficulties was President Putin, and that if it were not for him, the crisis would end immediately and of its own accord.

In this context, the murder committed on the evening of February 27 on the Great Moskvoretsky Bridge a few dozen meters from the Kremlin proved most opportune. So opportune, that many commentators began immediately to suspect that the opposition itself had organized it, so as to ensure a massive turnout for the protest march, transformed hastily into a mourning procession.

This, of course, is hardly to be believed. The scale of the provocation was too great for so limited and local a goal. Nevertheless, the revenge meted out to Nemtsov dealt an obvious blow to President Putin. The victim of the killing had not presented a serious threat to the authorities. Even within the protest movement Nemtsov had played secondary roles, and had not been at the center of events either organizationally or ideologically—unlike Aleksey Navalny, whose popularity in Moscow was increasing rapidly thanks to his anti-corruption campaigning, or former finance minister Aleksey Kudrin, who even after resigning had retained control over numerous government decisions through his associates. Russian bloggers with a taste for black humor noted ironically that Nemtsov had long been a political corpse, and that only death had restored him to political life. As a media personality, however, Nemtsov—a former governor of Nizhny Novgorod Province, a former deputy prime minister—unquestionably attracted interest. Those who ordered his murder undoubtedly acted on this basis.

As always in such cases, the crime swiftly became overgrown with a thicket of competing explanations, while rival political camps heaped accusations on one another. The opposition sought to prove that those to blame for Nemtsov’s murder were the authorities, who had either organized the killing directly, or who were morally responsible, having created an atmosphere of hatred in society. There is an element of truth in the latter charge, since political discussions in Russia long ago overstepped the bounds of democratic niceties. But this applies to supporters of the opposition no less, and even more, than to defenders of the present administration.

For their part, Kremlin supporters joined in voicing suspicions of a “bloody provocation by the opposition,” said to have demanded the carrying out of “a ritual sacrifice.” Some also claimed to see a “Ukrainian thread” in Nemtsov’s murder, referring to the strange role played by the politician’s companion, the Kiev model Anna Duritskaya, who was at the scene of the crime but emerged completely unhurt.

As usual, the warring sides have not listened to one another, and have shown little interest in discovering the real reasons for the killing. In this setting the remarks of St Petersburg blogger Anatoly Nesmeyan, known on the net as El-Murid, are especially notable. In his view those who ordered the murder were not “sworn conspirators” from among opposition activists and liberal westernizers, but high-ranking figures from within the Russian establishment. In other words, a pretext was being prepared in Moscow for a palace coup.

It is such a coup in the top echelon of the authorities, and not marches by the opposition intelligentsia, that poses the only real threat to Putin, who despite everything enjoys the support of a large majority of Russians. Unless the president decides for some reason to hand over power ahead of time, as Boris Yeltsin did in 1999, no one but his own innermost circle can remove him. The growing crisis in relations with the West is not bringing any joy to the Russian elite, and the economic mess is not giving its members cause for optimism. Government organs are constantly refusing, publicly, to implement decisions of the president, as occurred for example in the well-known case of the tax that Putin tried to levy on oligarchs who had grown rich on the privatizations of the 1990s. In such a situation the question of replacing the leader inevitably arises, and precisely in the top ranks of the administration.

If we go on to examine the events from the angle of the distribution of power within the government, there is every reason to suspect that the shooting of a well-known politician and personal acquaintance of the president, literally within a few steps of the Kremlin, amounts to a sort of message whose target is particularly obvious. There is not the slightest doubt that the “national leader” understands the significance of this message, but what conclusions Putin will draw concerning his own options is less clear. We shall find out in the coming months.

Meanwhile, the majority of Russian citizens who belong neither to the “party of power” nor to the liberal opposition have reacted to these events with a mixture of indifference and incomprehension. Against a backdrop of the deaths of thousands of peaceful residents of the Donbass, the murder of a single political figure in Moscow cannot arouse powerful emotions. Especially since many still recall the role played by Boris Nemtsov in 1993, during the shelling of the Russian parliament by troops of President Yeltsin.

At that time it was the very same Nemtsov who, addressing the wavering Prime Minister Viktor Chernomyrdin, uttered the famous words: “Crush them, Viktor Stepanovich, crush them! There’s no time to lose! Annihilate them!”