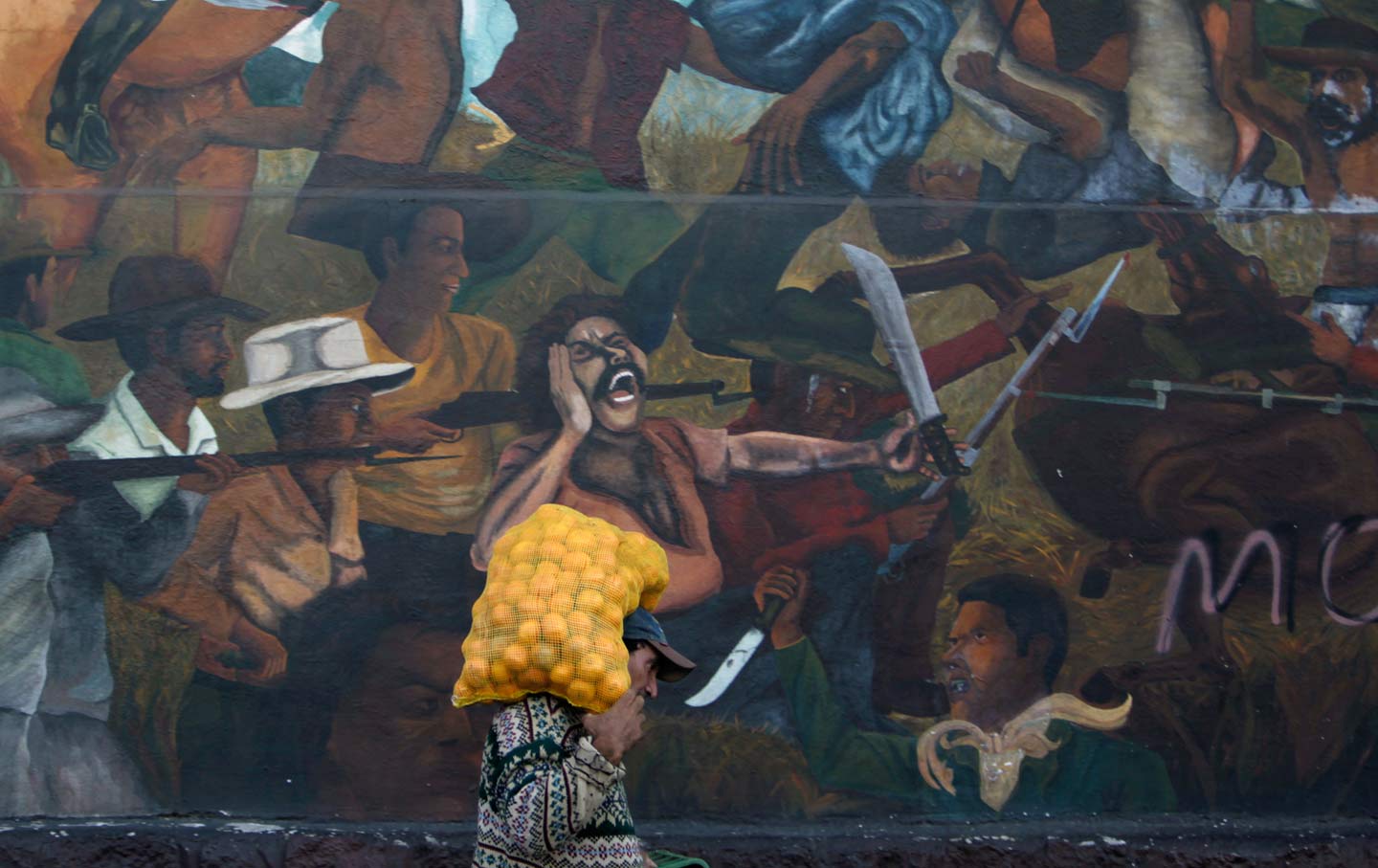 A man carries a sack of oranges while walking past a mural depicting a fight between farmers and private landlords in Tegucigalpa, Honduras's capital. (Reuters / Jorge Cabrera)

Honduras is a country that many Americans tend to encounter mainly in the news and the grocery store. We see headlines about the influx of migrant children at the southern US border fleeing economic and social devastation. And we enjoy the fruits of the country’s economic underdevelopment every day at grocery stores stocked with Honduran-grown bananas and coffee beans.

But now Honduras’s products and people are entangled in a social crisis driving international pressure for an independent investigation into our Central American “trade partner’s” Banana Republic–style anti-labor tactics.

Several trade unionists have reportedly faced death threats in recent months amid rising labor and political tumult. In late August and early September, Tomás Membreño Pérez, a leader of the Union of Agroindustrial and Related Workers (STAS), affiliated with labor federation FESTAGRO, realized he was a marked man when he was tracked on the road by a car without plates and received anonymous social media messages that, according to the US-based International Labor Rights Forum (ILRF), “detailed his whereabouts and threatened to kill him, his wife, and his son for trying to organize workers.”

Though it is unclear where these threats are coming from, Pérez challenged both the state and corporations (typically allied forces that control the most lucrative industries) by to trying organize some of the country’s largest and most globalized workforces—the farm laborers toiling for multinational agribusinesses. STAS has crossed banana giant Chiquita, which has historically been known for vicious union busting and cooperating with paramilitary groups in Colombia. At one Chiquita-owned plantation in particular, Finca Santa Rita, workers have suffered wage theft, anti-union retaliation, and grueling labor conditions, and “have struggled for years to resolve conflicts with management and gain secure recognition of their membership,” reports ILRF’s US Labor Education in the Americas Project (USLEAP). Pérez was also a potential target because of his work with the labor-rights watchdog network ACI-PARTICIPA, which recently documented nine violent attacks on trade unionists in 2015.

Meanwhile, though Pérez condemned employers’ lawless aggression, the law evidently failed to protect him. He recently told USLEAP “the authorities were not investigating the threats against him, leaving him–and his wife–to resort to tactics like varying their schedules and travel routes to prevent being victimized themselves.”

Pérez was one of several cases cited a recent statement of protest by labor advocates. They also cited the plight of FESTAGRO Technical Adviser Nelson Nuñez, who was reportedly also stalked by unmarked vehicles that “took pictures of his home while his family was present,” eventually compelling him to go into hiding. Similarly, FESTAGRO Communications Director José María Martínez, who, like Nuñez, had been a prominent voice on labor issues on a pro-union radio program, also recently fled “after he received numerous death threats in 2013.”

“The government and businessmen,” Nuñez told The Nation via e-mail, “principally the transnational banana companies, have been allies for years,” and regularly collaborating to suppress union organizing. Chiquita, he argues, is particularly adept at wielding its market influence against labor: “businessmen benefit politically because they pass on their anti-union know-how” so large employers can deploy “the same strategies” against workers at various subsidiaries.

According to labor activists, the pattern of poverty wages and exploitative work conditions, is driven by a pattern of companies establishing yellow unions to preempt independent unionization. At Chiquita supplier Finca Tropical, the management pressured workers to turn against STAS and “used threats to force workers to participate in a work stoppage protesting the union in July.”

(Chiquita has not yet responded to an inquiry, but has publicly boasted of its “corporate social responsibility” practices, including an international labor framework established with international and regional union federations in 2001. Yet the impunity continues, according to union leaders, with tensions rising again following the recent shift in ownership to Brazil-based Cutrale.)

Overall AFL-CIO reports that at least 31 trade unionists have been killed since 2009 in Honduras. US labor groups have petitioned under a labor oversight mechanism in the CAFTA-DR trade agreement (which officials originally touted as a way to improve labor standards through regulated free trade). Yet while US labor officials have acknowledged these grievances, the system has, predictably, failed to produce meaningful progress on working conditions. The treaty, along with the 2009 coup, has actually coincided with a massive destabilization of Honduran society through corporate exploitation, impoverishment and Drug War violence.

Following a meeting between Honduran and US union representatives, the AFL-CIO summarized concerns expressed by Honduran activists:

employers in the agricultural sector continually flout the labor law, and the combination of minimal government inspection and insignificant fines for companies that violate the law mean companies prefer to pay paltry fines for violating the law than pay workers the wages they are legally owed.

Anti-union repression impacts all sectors: In garment and auto manufacturing, higher education, and telecommunications, Honduran workers report being dismissed for unionizing, according to International Trade Unions Congress. And as with the 2009 coup, in which the military and judiciary colluded to help overthrow popularly elected President Manuel Zelaya, from 2014 through early 2015, the courts “continued to show a bias against workers and to collude with the executive branch…[and] ruled against the workers in cases where trade unionists had been detained without charges.”

Union suppression, poverty, violence, and authoritarian governance all flow out of a culture of impunity. The United States reaps the benefits of this atmosphere of lawlessness through cheap imports and the migrants streaming into the country desperately seeking work. The conditions that produced corporate tyranny and social repression are now driving even children to flee violence roiling in their communities. Honduras’s economic refugees now range from trade unionists to toddlers (and for a time, the exiled deposed President Zelaya).

Now the turmoil the coup unleashed is boomeranging back to Capitol Hill and the Mexican border. Pressure is building on the White House to support an independent, UN-backed comprehensive corruption investigation through independent auditing body known as the Commission on Impunity (while Honduran officials are apparently promoting a government-controlled, much less independent investigative body instead). But if Kerry follows his predecessor as secretary of state, presidential hopeful Hillary Clinton—who we now know quietly facilitated the coup—the few voices of Honduran workers that manage to reach the United States may soon fade, as more activists are silenced for speaking out.