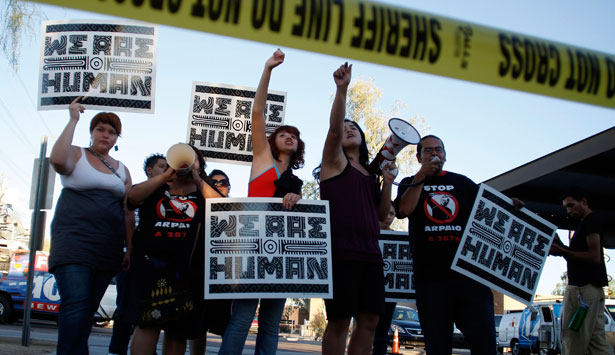 A protest in Maricopa County against racial profiling and immigrant crackdowns. (Reuters/Joshua Lott)

At least ten counties in Colorado announced this week that they will stop complying with requests from immigration officials to detain people solely for the purpose of investigating their immigration status.

The announcements follow similar moves made in late April by more than two-dozen counties in Oregon and Washington State, as well as the cities of Philadelphia and Baltimore. The trend illustrates the fraying relationship between Immigration and Customs Enforcement (ICE) and local law enforcement in several states, after recent court rulings challenged the legal foundations of their cooperation. The break presents yet another challenge to the Obama administration, whose immigration enforcement mechanisms lean heavily on the partnership between federal and local agents.

At issue are requests that ICE makes to local police to hold people beyond when they would be otherwise released so that immigration agents can determine if the individual can be deported. The requests are made under a program called Secure Communities. Launched in 2008, Secure Communities institutionalized cooperation between law enforcement and immigration authorities, and greatly expanded ICE’s ability to find and detain undocumented immigrants. It’s an integral part of the government’s deportation process, but immigrant rights groups say that the program acts as a dragnet inconsistent with the administration’s stated policy of prioritizing serious criminals for removal. (For a deep dive into the program, go here.)

Under Secure Communities, fingerprints taken by public safety officers are sent to ICE and checked against a database for the individual’s immigration and criminal history. If a match indicates a potential immigration violation, ICE often issues a request—known as a hold or a detainer—for local officials to keep an individual in jail for up to forty-eight hours, weekends excluded.

Several courts have ruled in recent months that in the absence of a warrant or a court order such detainers are not mandatory, and, critically, do not shield local officials from Fourth Amendment lawsuits brought by detainees. Most recently, on April 11, a federal judge in Oregon ruled that Clackamas County violated a woman’s constitutional rights by holding her without probable cause while ICE investigated her status. The county is now liable for damages to Maria Miranda-Olivares, the plaintiff.

“Detainers are completely at odds with basic constitutional rights,” American Civil Liberties Union staff attorney Kate Desormeau told The Nation. “The government can’t hold you in jail just because it wants to investigate you.”

Scott Wilson, a deputy sheriff in Kitsap County, Washington, said that his department’s decision to stop complying automatically with ICE detainers was purely a legal calculus made in response to the Clackamas County case. But other jurisdictions have taken the rulings as an opportunity to push back more forcefully against Secure Communities. “We will focus our efforts on complying with ICE detainers when there is an actual threat to the public’s safety,” Maryland Governor Martin O’Malley said in an April statement announcing that Baltimore would limit its cooperation.

In Colorado, policy reversals came down like dominoes on Wednesday and Thursday after the state branch of the ACLU sent a letter to sheriffs laying out the legal liabilities they could find themselves under if they continued to detain people without a legal basis beyond ICE’s request. Among those that have decided not to honor the detainers is Garfield County Sheriff Lou Vallario, who once deemed the ACLU “the most dangerous organization to the United States of America today” on account of its work on immigration. The ACLU of Washington and Iowa have sent similar letters, while several other branches including California are preparing their own.

Although the practice of issuing detainers is not new, the number of such requests “exploded” in recent years because of Secure Communities, Desormeau said. “The federal government has been leaning very heavily on state and local law enforcement to do the legwork, to find people who might be detainable and funnel them into the removal system,” she said. “What ICE is essentially doing is using detainers as a dragnet: issuing them on very little information and asking jails to hold people so they can have more time to determine if there’s any reason to put them into deportation proceedings. It’s ‘detain first, figure it out later.’”

The Obama administration maintains that its policies target criminals for deportation. However, many of the people deported through Secure Communities have only minor offenses on their records, or have simply been deported previously. A report released Tuesday by the Migration Policy Institute found that 75 percent of the people deported through Secure Communities had been convicted of a crime; that figure lumps together misdemeanors and felonies, and excludes the number of people who are not ultimately deported but nevertheless are held without cause after ICE issues a detainer.

Mark Silverstein, the legal director for the ACLU of Colorado, said he recently met an undocumented woman whose fingerprints were taken after she called the police to report domestic violence; she was then detained herself and put into deportation proceedings. “To the public, ICE says, ‘we are targeting our efforts on serious criminals who pose threat to public safety.’ But the reality is that people like that woman are also getting caught up in the immigration system,” Silverstein said. “The enforcement priorities that ICE trumpets are not reflected in the reality on the ground.”

“Even though some aliens may be arrested on minor criminal charges, they may also have more serious criminal backgrounds which disguise their true danger to society,” ICE spokesperson Danielle Bennett said in response to questions about the use of detainers and the agency’s cooperation with local law enforcement. “ICE anticipates that law enforcement agencies will comply with the detainer though ICE has not sought to compel compliance through legal proceedings.”

For now, legal winds are blowing local jurisdictions in the other direction. “For localities that are still holding people on this basis, they are taking the risk that what they’re doing is unconstitutional,” Desormeau warned.

Advocates see the spate of policy changes as a clear signal to the administration that current enforcement practices are broken. The Obama administration is currently reviewing those policies, and many groups including the Congressional Hispanic Caucus have called for an end to the entire Secure Communities program in their recommendations for reform. For now, Silverstein said, city and county-level decisions to limit their cooperation “has the potential to put cracks into a heretofore seamless pipeline” between law enforcement and immigration authorities.

Jesus Altamirano, who works in Denver for the National Council of La Raza Action Fund, called the Colorado sheriffs’ decisions “a great step” towards rebuilding community trust in the local police. “This is not going to be a long-term solution,” he cautioned. “There’s no real substitute outside of seeing a federal solution. We need to see that immigration reform bill come before a vote.”