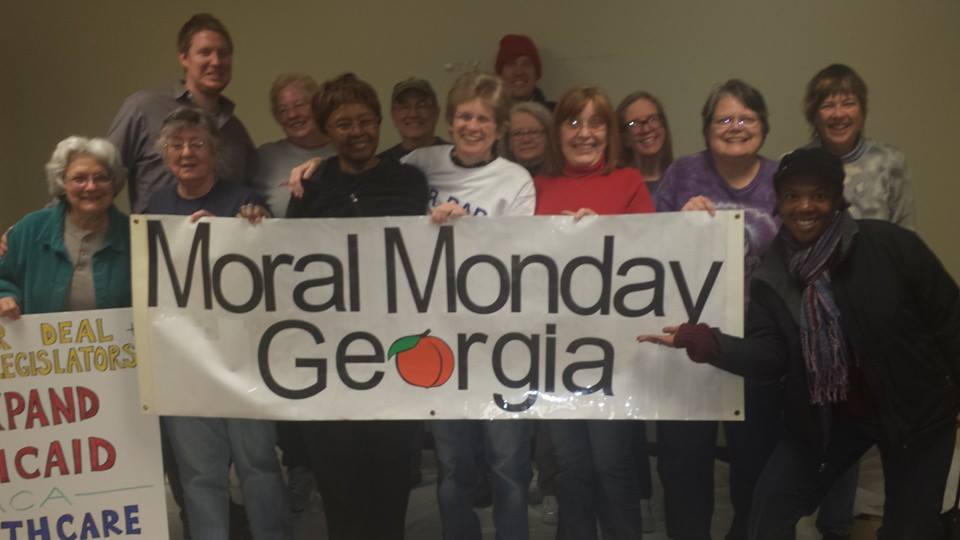 The Moral Monday protests that began in North Carolina in 2012 in response to extreme right-wing policies are spreading to Georgia.

Over the past year, droves of activists in North Carolina have descended on the state legislature building to demand that lawmakers reverse some of their more brutal policies such as cutting unemployment benefits, refusing to expand Medicaid, and rolling back voting rights. Thousands of people showed up for North Carolina’s Moral Mondays to disrupt the legislative session with acts of civil disobedience, resulting in the arrests of more than 900 individuals.

Progressives from across the state will gather during the legislative session beginning on January 13 to express their concerns about what the Atlanta Progressive News calls the “extremist veto-proof Republican-led Legislature that is working in concert with a like-minded Gov. Nathan Deal.”

Moral Monday Georgia describe themselves as “a multiracial, multi-issue coalition of citizens working for positive change for the public good.”

“Georgia has gone hard right at a time when income equality is at its height, unemployment is high, we have the creation of an economy designed to provide low paying, dead-end jobs, and we need an effort to respond to that,” said State Sen. Vincent Fort (D-Atlanta), who will be speaking at the rally. “Moral Mondays is exactly that kind of effort.”

Tim Franzen, from the Quaker social justice organization American Friends Service Committee, as well as Occupy Atlanta and Occupy Our Homes, told The GA Voice he is very excited that Moral Mondays is coming to his home state.

“We’ve been really inspired and it’s like nothing we’ve seen since the civil rights movement. It has forced people in North Carolina and all over the country to look at state budgets not as a random shopping list but as a list of our moral priorities,” he says. “It’s the ultimate insult to hardworking people, to struggling folks who are working their butts off at a fast food joint or Wal-Mart, and here’s an opportunity where they can get free healthcare,” he says. “We’re talking about real lives here, real beating hearts that are going to die because of ideological stubbornness. We find it unacceptable, both morally and fiscally.”

But organizers caution that the first Georgia Moral Monday won’t be on the same scale as the North Carolina protests, and might not feature arrests. Rather, the January gathering will set the tone for future actions.

Franzen told The GA Voice, “We hope the governor will come to his senses and do what is morally right, and if not then people might fill up the jail.”

“These opportunities for educational outreach will bring together a remarkable cross-section of people representing different groups, causes, and identities, coalescing around a common agenda of fundamental human rights and equality,” the Atlanta Progressive News explains.

“Georgia is one of those states, and we aren’t surprised, who doesn’t want to extend Medicaid. It would help over 600,000 Georgians, and it would bring in all kinds of money, federal money, into our state.”

After the service, McDonald said expanding Medicaid would greatly help his churchgoers.

“There are people in our congregation and probably every congregation who don’t have any kind of health care”.

According to the Kaiser Family Foundation, more than 400,000 people in Georgia will be denied Medicaid coverage by state leaders.

“The fact that Governor Deal would turn down Medicaid money is a shame and a crime before God. Folks under the Gold Dome say that [Medicaid] is a Grady problem or an Atlanta problem. Let’s be real—what they are saying is that Medicaid is a black problem, but it’s about hospitals statewide,” State Senator Vincent Fort (D-Atlanta) said at a recent rally outside of Grady Hospital, the largest hospital in Georgia.

“There are six hospitals in the Piedmont Healthcare System. One in Pickens County, one in Henry County, and one in a rural county in North Georgia. Some of these hospitals are in counties that are not predominantly African American or Democratic. Some are in Republican, rural and suburban counties. This is not an Atlanta problem, but a Georgia problem,” Sen. Fort said.

He added: “Every year, a thousand people die for every one million people who don’t have health care. Don’t take my word for this, the Harvard Medical School did this research. Because of Governor Deal’s partisan politics, the six hundred and fifty thousand Georgians who do not have health care, six to seven hundred of them will die next year.”