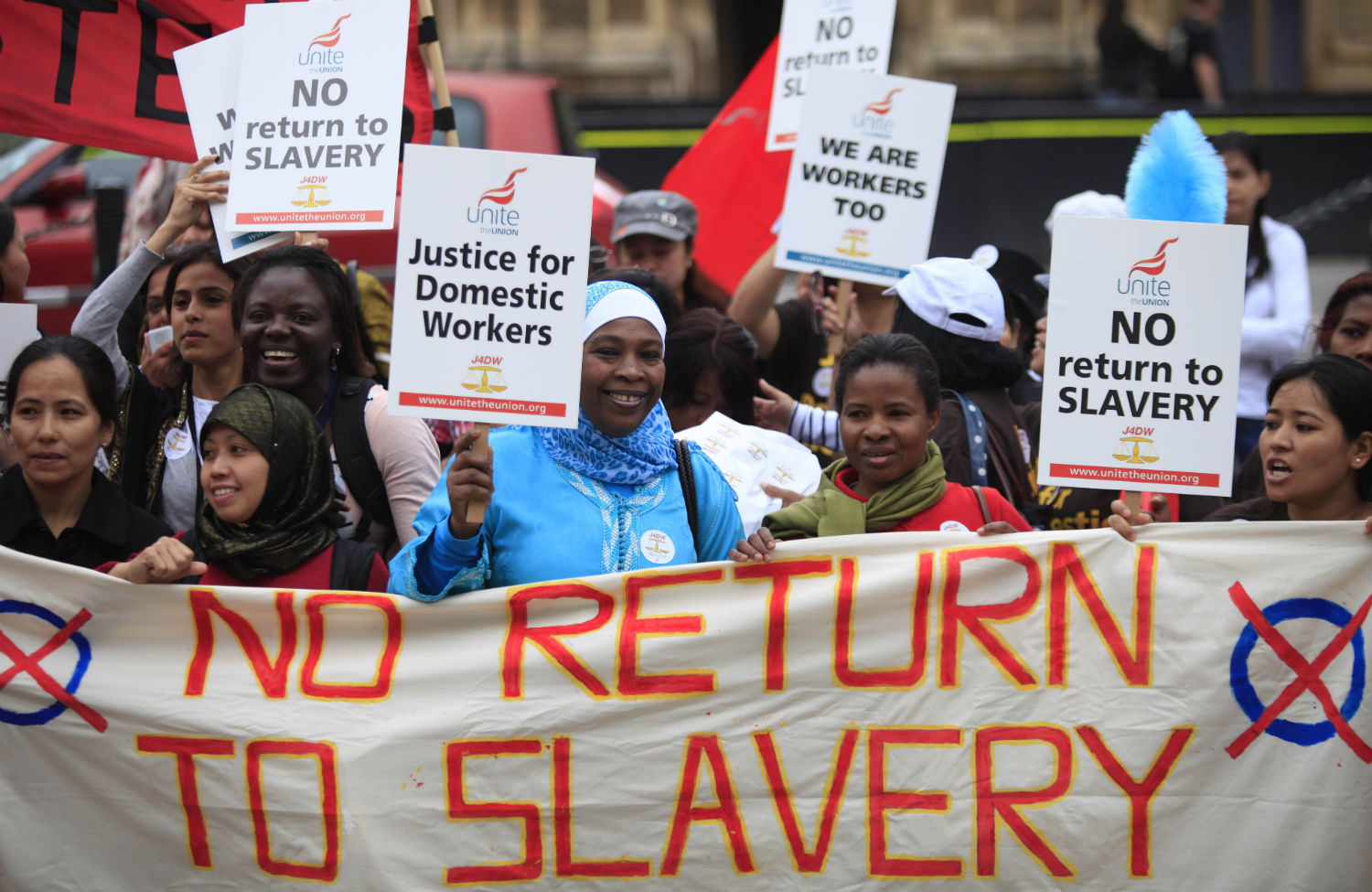 Migrant workers gather for a rally across from the Houses of Parliament, in central London (AP Photo/Lefteris Pitarakis)

Last November, the British tabloids were ablaze with headlines about a sensational case of “modern day slavery”: three women were reportedly rescued from forced “domestic servitude”—a captivity that had lasted three decades under the grip of a mysterious expatriate couple. The Brits were outraged that such an atrocity could have gone on seemingly unnoticed for so long in a busy metropolis.

The idea that “slavery” was still possible in twenty-first century England sparked a heated political debate, generating support for an “anti-slavery bill” that included long prison terms for perpetrators of trafficking and forced labor. But now that the media spotlight has faded from the salacious slavery house, softer forms of indentured servitude still flourish across London—and the law actually allows this bondage. These are immigrants imported legally, as household servants for foreign nationals, from the Global South. And their exploitation is less shocking to the conscience because it is so integral to the economic status quo.

An extensive investigation published by Human Rights Watch (HRW) reveals how the exploitation of migrant domestic workers in Britain has been aided and abetted by Parliament. Under United Kingdom visa law, affluent foreign nationals are allowed to bring “the help” with them, granting special work authorization to the servants they kept before moving to the UK. The scope of human rights laws and UK labor regulation seems to stop at the doorstep of the homes where these workers toil in isolation.

Of the roughly 15,000 migrant domestic workers entering the UK each year on special labor visas, an untold number are subjected to brutal, restrictive work regimens. The workers interviewed, mostly women from the Philippines, India, Morocco and Nigeria, are hired as servants and caretakers for children and the elderly, endure a range of abuses (working around the clock without adequate food), are denied their promised wages, and are even barred from going outside. “Andrea” told researchers:

They locked me up in the house in London, and when we went outside, sometimes they didn’t give me food. I didn’t have a sim card, I didn’t have money. My boss sent my salary to the Philippines.

The violations documented in HRW’s surveys and interviews include: “the confiscation of passports, confinement to the home, physical and psychological abuse, extremely long working hours with no rest days, and very low wages or non-payment of wages.” UK authorities should hardly be shocked by the fact that this is happening in an affluent Western democracy—the law allows for the direct importation of a type of traditional labor indenture known as the Kafala system from Gulf States like Saudi Arabia, a country that Western politicians have condemned for human rights abuses against migrant workers.

What’s extraordinary about their labor arrangement in the UK is that recent legal reforms have made them more, not less vulnerable to abuse. The government amended its visa regime in April 2012 to restrict migrants to a “tied visa system,” making it virtually impossible for a worker to change their sponsoring employer. By eviscerating the right to change one's workplace, the government effectively tethers domestic workers to the dominion of the householder, where the workplace is also the place one depends on for food and shelter, as well as their legal authorization as immigrants.

Although the abuse of domestic workers is not a new problem—and indeed, the systematic exploitation of housekeepers and caretakers is a major labor issue in many rich countries, including the United States—the UK's new employer-bound visa has dramatically heightened risks of mistreatment. They are subject to their boss's oppressive maltreatment and economic coercion, and yet the idea of breaking away from an abusive employer is unimaginable for many, as losing their visa means risking deportation and losing the overseas jobs that, despite the intense hardships, remain a critical way for these women to support their families in their home country.

UK law technically requires that foreign domestic workers have a formal contract outlining “written terms and conditions” of employment, and be generally informed of their labor rights. But the regulation of these labor arrangements is haphazard and relies on an honor system. “Once they are here, there are no checks, there's no mechanism to make sure how employers are treating them and if they're complying with those terms and conditions,” says HRW researcher Izza Leghtas. “So they could say [on the initial visa application] that they're giving them a good salary, that they're giving them time off, etc.—and not respect that at all once they're here.”

HRW found that workers often had little understanding of their labor rights and so were not even aware that they were, for example, entitled to a minimum wage. Many also did not know where to turn for help after suffering abuse. One Filipina worker reported that for several days after she ran away from her employer, she was sleeping in the park because she didn’t know anybody there: "I felt like a beggar.”

Pointing to the intersection of a dysfunctional domestic social policy and a twisted immigration policy, HRW notes that the government’s recent austerity measures have undermined resources for social services and legal aid for undocumented survivors. Meanwhile, UK politics percolate with sensationalized reporting and alarmist rhetoric about “combating human trafficking”—reflecting the notion that the everyday exploitation of migrants is somehow separate from the moral abomination of modern-day slavery. The public often fixates specifically, and disproportionately, on sex trafficking—which draws headlines as an especially scandalous form of enslavement—as opposed to more quotidian, less sensationalized systems of worker exploitation.

In fact, qualifying as an official trafficking victim is often the only means of immigration relief for abused domestic workers. They must petition through a bureaucratic process known as the National Referral Mechanism under the UK Human Trafficking Centre, an arm of the National Crime Agency. Advocates point out that many survivors are too traumatized, or simply unwilling to cooperate with criminal justice authorities, particularly without any guarantee that they will be granted residency in the end. (The UK has also failed to ratify the International Labour Organization's Domestic Workers Convention, a key accord establishing basic labor protections and standards for migrant domestic workers.)

So the UK's existing immigration and labor laws place the burden of proof on the survivor, showing the cruelty of its immigration policy toward workers whose only “crime” is being caught up in a system of labor that is criminal by design.

For a country that claims to be wielding the rule of law against “modern day slavery,” the UK seems keen on abandoning its most vulnerable workers to the rule of the master of the house.