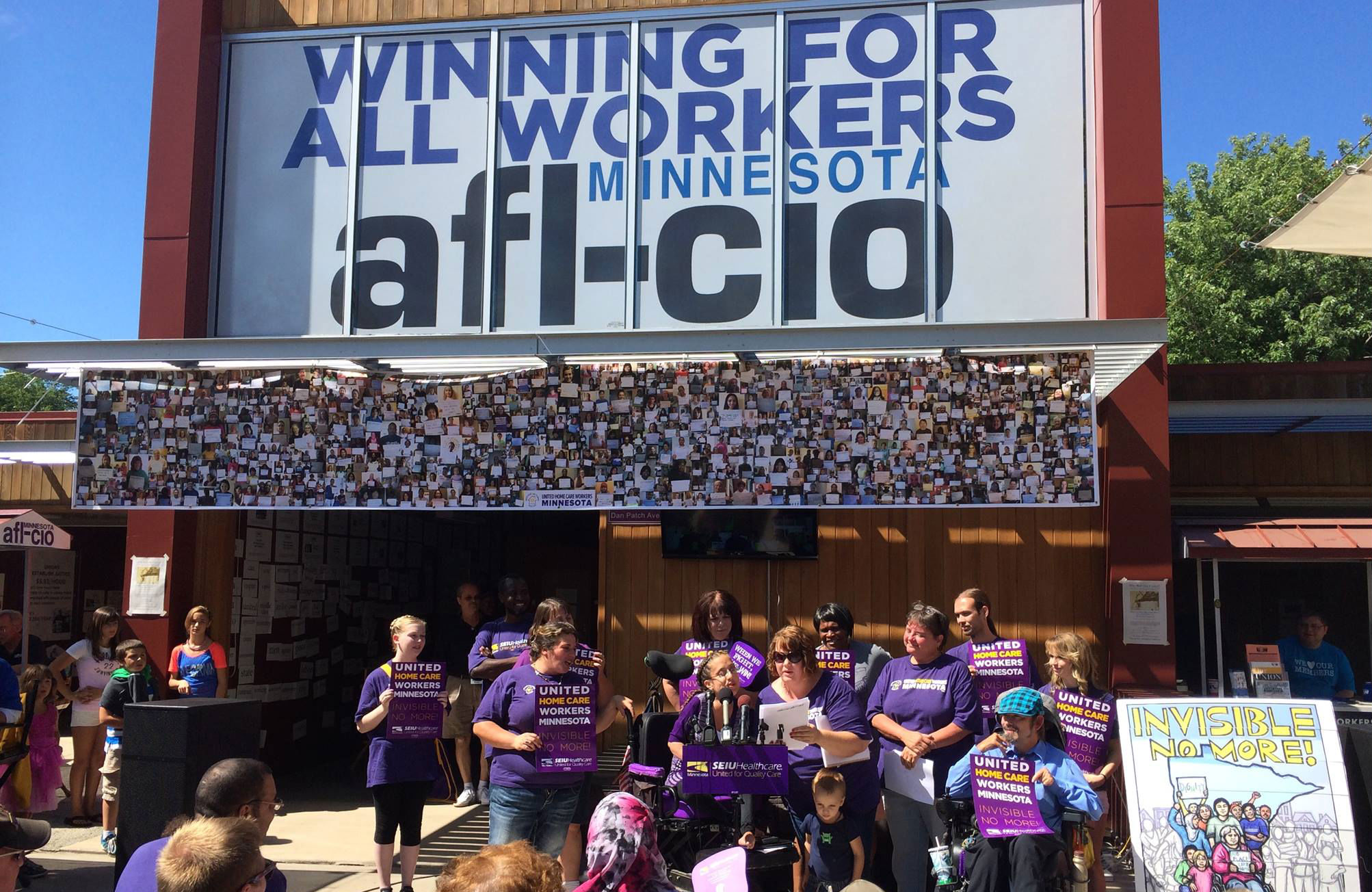 Home healthcare workers in Minnesota went to work this week with a spring in their step: they just got a union, opening up a new door for negotiating higher wages and career advancement for some 27,000 healthcare workers statewide.

For the Service Employees International Union (SEIU), winning the union vote—which makes the health aides the state’s largest collective bargaining unit—also sends a national message: at a time when unions are in decline and public sector workers are constantly facing political attacks, workers still recognize the value of a union contract—especially in a precarious, low-wage sector like the home healthcare attendants who provide Medicaid-funded elder and disability care.

The union win might also hint at a new energy that has sprung up in the labor movement after the Supreme Court dealt it a fierce blow in June. In the 5-4 ruling in Harris v. Quinn, the Court struck down a key pillar of union financing—mandatory fees collection from workers covered by a union contract—among homecare workers in Illinois. The ruling, which establishes a national precedent for making “fair share” fees optional for home health aides, affirmed the right’s longstanding legal assault on the infrastructure of organized labor.

While the decision did not impinge directly on public workers’ collective bargaining rights, it threatened their unions’ capacity to sustain their operations, as individual workers could opt out of union fees if they did not wish to support the union. But the Minnesota victory might suggest that Harris v. Quinn did not impede, and may even have emboldened, a countervailing organizing momentum. Some labor advocates hoped the ruling would goad unions to recognize that they could no longer take “closed shop” fees collection for granted. Rather, they needed to revamp organizing efforts to boost membership, showing workers that the union is a community worth joining and supporting.

The new union in Minnesota joins a growing network of organized, state-sponsored home care workforces (following pioneering grassroots organizing campaigns in California, Oregon, Washington and Illinois). And in a way, it’s an unlikely sector to unionize—thousands of individual health aides working in private households. But the linchpin of these unions is the payroll; they represent workers who offer personal care that is financed by public healthcare funds, a single workforce without a shared workplace.

Now Minnesota home care workers get their seat at the bargaining table. Workers have pointed to low wages and benefits as factors driving high turnover, which in turn compromises the quality of services. The advocacy group PHI reports that the typical hourly wage for Minnesota home health aides is about $11, and about 40 percent of direct-service healthcare workers receive public assistance.

The union vote wasn’t an easy win. The final vote gave SEIU a 60 percent majority, indicating that organizers will now have to actively engage the sizable portion of the workforce that might not readily join as dues-paying members.

In the lead-up to the vote, the Minnesota workers overcame a constitutional challenge raised by a group of anti-union workers claiming that public sector unionization violated their First Amendment rights—reflecting the legal argument that drives anti-union campaigns led by the National Right to Work Committee.

After the vote count, it was that their campaign itself had been a clear exercise in collective self-expression. At the press conference, Rosemary Van Vickle, a home care worker from Crosby, said, “Despite the importance of our work caring for Minnesotans in every corner of the state, our work still lacks the respect it deserves…. With our collective voice, we will be strong in our fight for improvements for both workers and the people we serve.”

Following the announcement of the vote, St. Paul home care worker Sumer Spika told The Nation that the union organizers were looking forward to informing workers of their rights, and actively encouraging them to sign union cards.

But in the end, against the backdrop of courtroom drama, roiling political battles surrounding public-sector labor, and activist handwringing about what will save American unions, the unionization push of the Minnesota home care workers just came down to having a voice at work.

“One of the things that really inspired me, and has continued to inspire me, about this campaign is that it’s not about the people who work at SEIU,” Spika says. “It’s not about the governor, it’s not about politicians, it’s about home care workers. And we have been able to make the decisions from the get-go, the entire way through, [over] every obstacle.”

Bringing the same personal touch that their work delivers to the people in their care, Spika adds, “I think that really has made a world of difference in our campaign: it’s about us as home care workers, and about our recipients, and nothing more than that.”