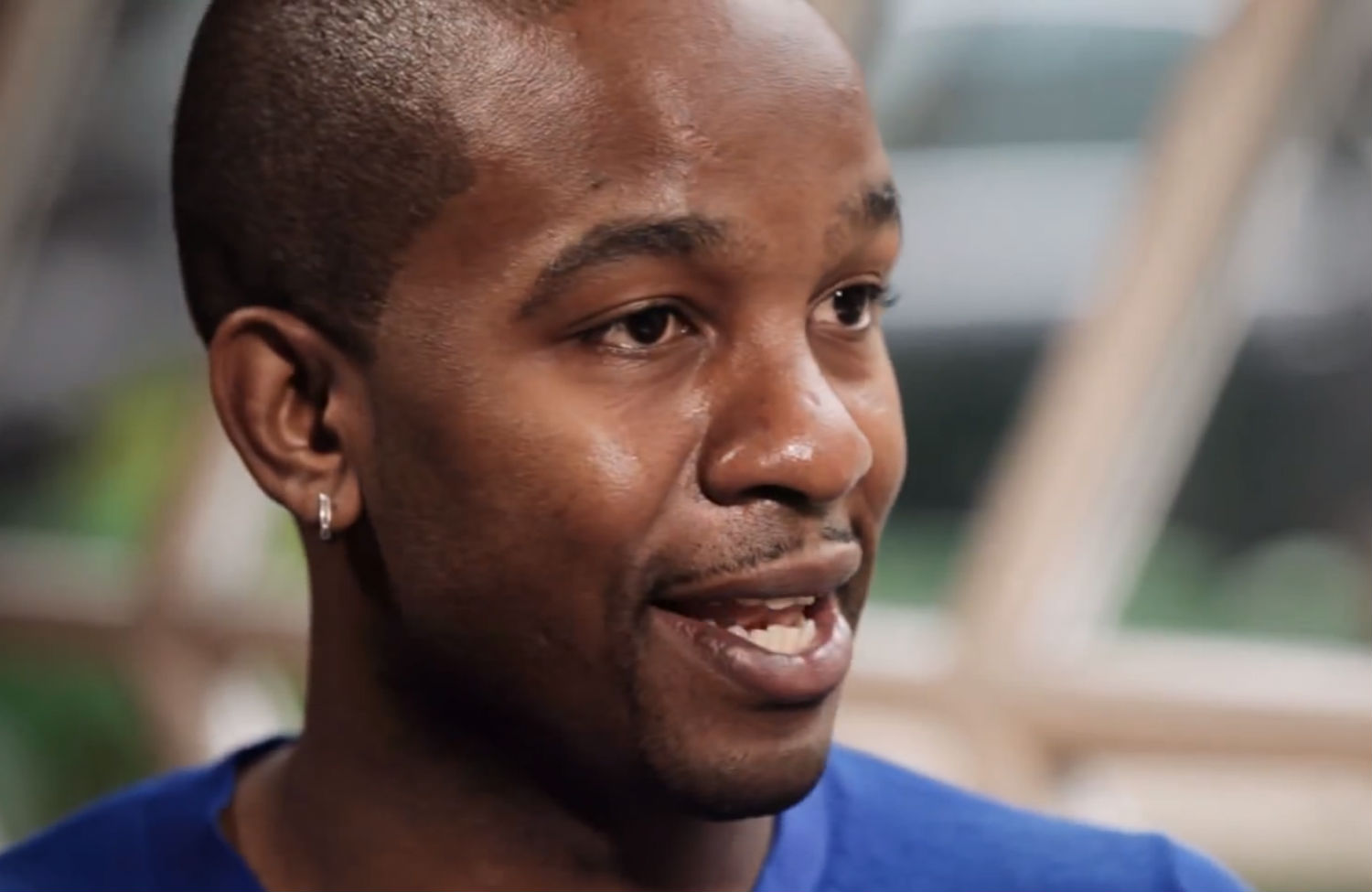 Wade Davis played in the NFL from 2000–03. In 2012 he chose to go public and become the fourth openly gay former NFL player. Davis is now executive director of the You Can Play Project. He has written for numerous publications and just wrote a piece in Sports Illustrated about spending six hours with Michael Sam prior to Sam’s announcement that he would seek to become the first openly gay player in the NFL.

Dave Zirin: Is Michael Sam ready for all of this?

Wade Davis: One hundred percent. And I say that because he was not overwhelmed at all by this. He understood the gravity of it, but he was like, “Look, I’m ready to get this media hoopla over with and to get back to playing ball.” He gets the magnitude of it from a social perspective, but from a football perspective, he says, “Look, I’m a football guy. I’ve been playing it my whole life and I’m better at it than most.” And he’s going to prove it.

Put yourself in the shoes of Wade Davis, circa 2000. If you had come out as an active player, what do you think happens?

First of all, I think people would say, “Well, who is this kid? He’s a scrub. He’s barely making a roster… How many times has he been cut?” But I think the conversation’s different. We weren’t having conversations around athletes and homophobia and sports, or who’s the first athlete that’s going to come out. I think it would be a very different reception not because the sports community is more or less homophobic, but from a national discourse, we weren’t having the same discussions then. There were no marriage equality conversations happening. I just think the entire world was different. I think people would have been like, “Wow, this kid here is crazy. This is suicide.” Whereas with Michael Sam, people are like, “Ok, he can play… so let him play”

In high school, very common. In college, a little less. And in the pros, it’s largely nonexistent. I think there’s always been an unfortunate association with being a gay man as being weaker or soft. The real issue there being that gay men are equated with women, which again says a lot about the problems that our country has with sexism. It should be okay to equate a man to a woman and not to think that means someone’s inferior. It’s unfortunate that this happens so frequently because, I think it is the main reason that guys don’t come out that they’re gay. Because they don’t want to be perceived as weak. It’s not like athletes don’t want to tell their story, or live in their truth. Often our athletic identity and our masculinity are attached. So if you say “I’m gay,” someone will say, “Oh, he’s not man enough.” Or, “He’s not as strong as this other guy.” I think that’s one of the bigger issues.

[This next question was asked just before the release of the Ted Wells report detailing the extent of the bullying in the Miami Dolphins locker room.]

One of the first NFL players to tweet support for Michael Sam was a gentleman by the name of Richie Incognito. And I raise that, because in all of the text messages released between Richie Incognito and Jonathan Martin you saw a lot of anti-gay slurs. When you saw that Richie Incognito sent that out, did your head go towards “this is part of his image rehabilitation” or did it go toward, “wow, maybe Richie has changed.” What was your reaction to that?

Now, this is the first time I’ve been asked this question. So, to be honest my initial thought was that, “oh, this is just his rehabilitation thing.” But then I stood back and I said, “Why am I judging this man?” I only have half of the information. All that I have is the texts, half of the conversation. But I think what we have to not do is vilify athletes as easily as we do. Jonathan Vilma made his comment that he felt uncomfortable showering with a gay teammate. Good. Let’s bring these things out to the forefront. If you have a problem with a gay teammate.

And isn’t it better than an anonymous general manager saying things to Sports Illustrated?

It’s so much better, because a lot of us have a lot of growing to do as individuals, and that doesn’t make Jonathan Vilma homophobic. If I’m at a gay club, and I’m taking a leak, and a man comes and stands too close to me, I get uncomfortable. It’s just a natural thing, how often are you in close proximity with someone else [naked]. Now what makes a difference is that Jonathan Vilma would be OK with it if the person was straight. But now that he knows that Michael Sam is gay… it speaks to the fact that men aren’t used to the prospect of being objectified.

You’re absolutely right. That’s a huge part of it. Men not knowing what women go through on a daily basis.

You know, it all comes down to having experiences. I guarantee that if Jonathan Vilma has a chance to sit down with myself or any other gay person, he’d be like, “You know what? These old ideas that I had about gay people… they really aren’t true.” It’s not all Jonathan Vilma’s fault. Our country has a very monolithic way that they show gay men—the Modern Familys and what not. The exposure’s great, but let’s have some nuance to show that there are different types of gay people, so Jonathan Vilma’s mind can expand and he can say, “Oh, every gay man doesn’t want me.” Most guys look terrible naked, and I should know. And, straight guys look too… there’s a perception that straight guys don’t check out other guys’ penises, and that’s a lie. The one difference is that some straight guys get uncomfortable and think that every gay man wants them. Wrong. Every man does not look like Brad Pitt.

Football is a violent sport. Do you think that it’s possible that players, whether in practice or in games—at the bottom of a pile—could go out of their way to hurt Michael Sam to make some kind of a statement?

I’m going to be honest with you. I don’t think so. Let’s take [hard-hitting safety] Dashon Goldson, right? I don’t think if there was a gay receiver out there, Dashon Goldson could hit a wide receiver any harder. It’s not like they’re going, “Oh, this guy’s straight so I’m going to take a little off of this hit.” Or, “This guy’s gay so I’m going to hit him harder.” Football players play to the max of their abilities because they love it, or because they want to get better contracts or better deals. In the bottom of piles, I’ve been hit or I’ve had my genitalia grabbed or punched. I don’t think it’s going to happen any more or less just because Michael Sam is gay. And, I think that you’re going to find that his teammates are going to protect him more than anyone else because they want the rest of the NFL to know that this is one of their guys. There is a family and a friend dynamic that happens, especially now because people might assume that he will be a target, so his teammates are going to rally around him. And the bond that’s going to be formed is going to be stronger than anything you could have imagined.

The NFLPA, DeMaurice Smith, he called the anonymous executives who talked about Michael Sam’s dropping draft status “gutless.” Do you agree with that?

I think it’s interesting that these execs don’t see the brilliance of what Michael Sam is. How many players, or people in general, have stood up in front of the whole world and said, “This is me.” It shows the type of vulnerability that is a strength. It shows courage that any coach, teammate, exec should want to have. So I think they’re looking at it from the wrong angle, and they’re living in the 1940s. And that’s why I’m so grateful for people like Robert Kraft, and the Giants’ owner John Mara and John Elway who said, “Wait a minute. This is the type of guy that I want on my team, because they represent what a majority of the NFL is about.”

Last question for you, sir. There is an aristocracy of NFL players. Everybody knows them: Peyton, Tom—you only have to use first names—hell, Aaron, Drew, we might even be able to put Russell in there after this last Super Bowl, honestly. Last question for you, does it matter to you at all that the aristocracy has not put out some support or love for Michael Sam’s announcement?

No, it doesn’t matter because those guys aren’t typically the ones who do a lot of talking about stuff anyway. I can’t remember the last time Tom Brady spoke out on any issue…

Well, Uggs are very important to him, I hear.

Exactly. And I would say that probably 90 percent of those guys are probably—well, Peyton’s in the film room—somewhere in Jamaica, or somewhere in Paris. So they’re like, “Great, but it doesn’t bother me.” Deion Sanders of the world, who’s my favorite player of all time, spoke up early in support of Michael Sam. So I was very pleased.