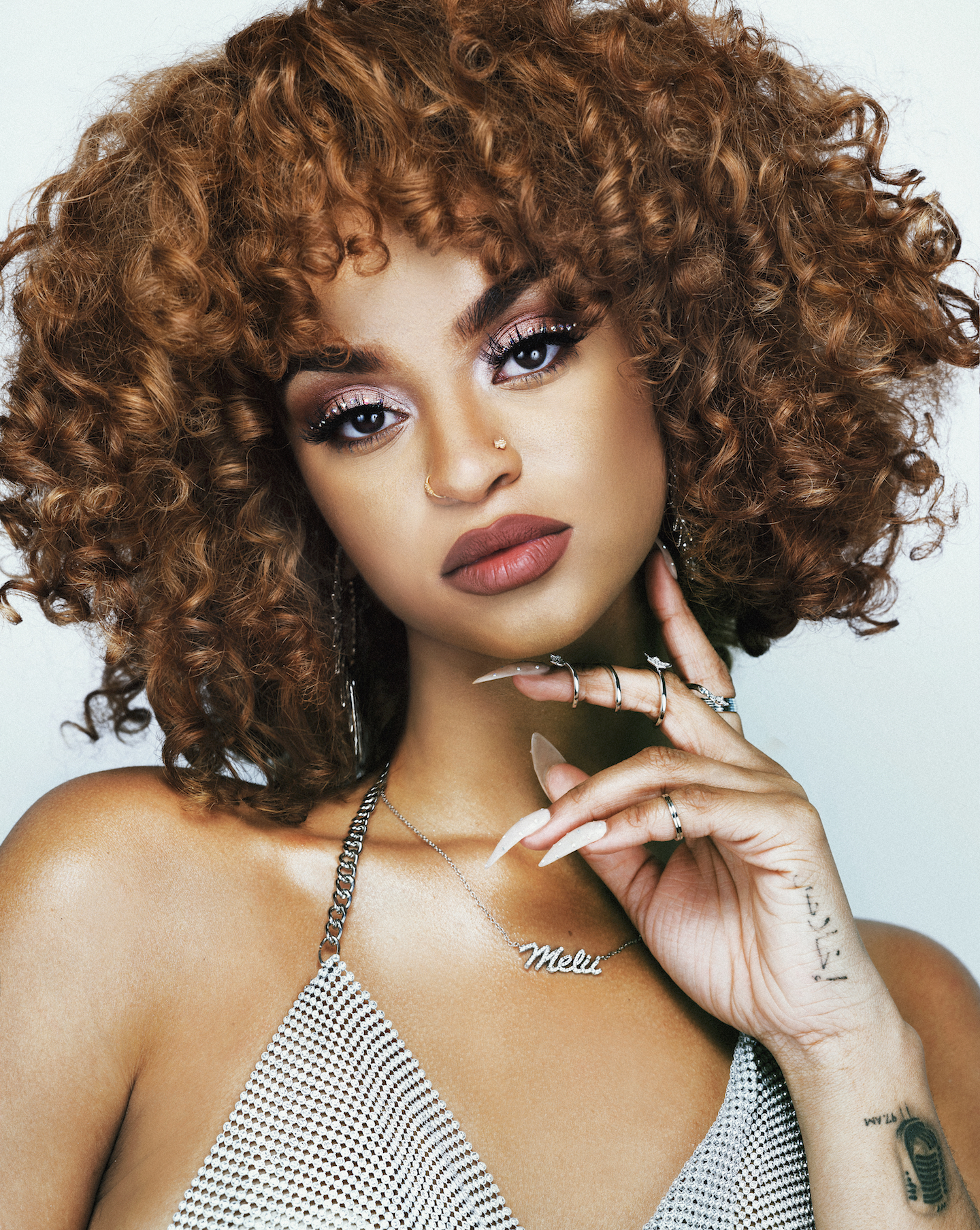 Melii’s official introduction to the world was “Icey,” a self-indulgent, unapologetic love letter to herself. The up-tempo trap track, which dropped in March of 2018, was a ruthless combination of insolence and bravado that put the Harlem rapper’s spiky rhyming front and center. “These bitches don’t like me / Their baby daddy keep me icy,” she rumbled, her voice low, flagrant, and caustic.

The then-21-year-old had only a few songs and covers to her name at that point. After dropping out of Manhattan’s Edward A. Reynolds West Side High School in 2015 (the same school that hip-hop artist A$AP Rocky once attended), Melii had been working with local managers and releasing her DIY efforts directly to the Internet. Her first real break came in 2017, when she unleashed a remix of Cardi B’s “Bodak Yellow” that went viral, racking up more than 2 million views. A stack of original tracks followed, including “Icey,” “Como Si Na,” and “Shit Talk”—all songs that showed off her raspy voice, brisk flows in English and Spanish, and talent for writing stinging bars and catchy hooks with ease. The early material positioned Melii as the spunky-kid-sister type, someone who punched back at haters and always fought to keep her career throttling forward, despite the challenges of being an emerging female artist in rap.

“Icey” was her most declarative statement, and it won attention not just from fans but also from established stars, who soon helped Melii springboard from the local New York scene into mainstream territory. Rihanna—the patron saint of defiant swagger—featured “Icey” on an Instagram video, sending followers to Melii’s social-media pages, where they discovered a firebrand with electric-orange curls and rhymes to spare. In November of 2018, the rapper Meek Mill featured her rambunctious sound on his track “Wit the Shits” and brought her on tour, sparking rumors that she would sign with his label, Dream Chasers Records.

But Melii surprised everyone (Mill included) by dropping her debut album, phAses, smack-dab in the middle of a quiet week this past March and announcing that she had joined Tory Lanez’s One Umbrella imprint instead. The move was divisive—many accused Melii of snubbing Mill—but behind the drama, there was a glossed-up product full of tenacious rap and silky R&B that Melii said she had meticulously labored over for several months. Some of her sharper edges have been softened in places, but phAses is clearly intended to position her as a dexterous artist who can riff on different styles of hip-hop and R&B. Through an impressive palette of sounds, Melii emerges here no longer as a fresh-faced scrapper but rather as a self-assured force who has deftly stepped over a string of obstacles to find her perch in the industry.

On phAses, Melii stretches her husky vocals across a broad assortment of springy beats that are crisp and neatly produced. Each cut feels like a different swatch of the artist—an intentional effect that, she revealed, stems from her personal way of writing and observing the world. “Every song has a wrap up, it has a story. It’s a page in my journal,” she told The Fader in March. That confessional style is apparent in the winding opener, “Way Out,” which introduces Melii as a tough-spirited dreamer who continually perseveres. “Mama workin’ three jobs, only see her in the night, / There was times where we ain’t have it, grindin’ for a better life,” she declares, her voice picking up momentum and flickering with the vitality that she often packs into her freestyles.

Other lyrics find Melii flexing her confidence and cheering herself on after overcoming rough moments navigating the business as an especially young woman. She’s talked about these experiences publicly: In an interview on New York City’s Hot 97, she broke down sobbing as she shared the story of a manager who almost derailed her career when she was a teenager. Even the release of phAses was briefly eclipsed by a spat between male label owners. When Lanez welcomed Melii to his label in an Instagram post, Mill called the move “corny” in a since-deleted comment. People took shots at Melii on social media, and hip-hop blogs splashed the controversy across their pages.

This Is How You Make an Electronic Masterpiece

Then Melii took control of the situation by speaking up. “If anything I tried my best to work around many things that put me in uncomfortable situations,” she wrote in an Instagram story, addressing her time collaborating with Mill. “As a woman a lot of things I stood for weren’t there so I took the high road [and] gracefully removed myself.” It was an assertive and resolute explanation, in keeping with the strength of will and empowerment that’s so apparent on phAses. On slicker songs, like “Mister” and “Trip,” she delights in her own sexuality and pleasure, forthrightly putting herself first. Her audaciousness is at its peak when she launches into full-throttle rap songs like “Gangsta Talk.” When the wobbly bass drops, it suddenly feels as if Melii has been sucking in a breath and is ready to burst. She lunges into a harsh show of bluster with her own performance of blunt gangster rap, which has traditionally been the arena of male MCs. She’s combustible again on “Copy,” an unforgiving, high-octane blow to artists who have tried to mimic her style. It’s one of the most effective songs on the album; over an apocalyptic beat, she strikes back at copycats with brutal lyrics in Spanish and English.

Melii’s ability to slide seamlessly between languages sets her apart and centers her identity as a Dominican Afro-Latina. But particularly on a project that wants to be eclectic, it’s a curious choice not to dive deeper into the styles of Latin urban music or test out a full song in Spanish, as she did on “Como Si Na,” which was loaded with prickly, provocative lines that proved how fluently she could write in the language. Her fellow Dominican rappers Cardi B and DaniLeigh have both folded Latin genres into their work—Cardi by teaming up with stars like Ozuna and Bad Bunny, while DaniLeigh used a bachata beat at one point. Melii has a better command of the language and a smarter sense of what lyrics glimmer in Spanish, as the blistering pre-chorus of “Icey” demonstrated: “Tú me tienes tema, / Cuida’o, si me tocas, te quemas” (You have issues with me, / Be careful, if you touch me, you might get burned), she snapped with perfect inflection. Melii does nod to Caribbean rhythms on “HML,” a track that features A Boogie Wit Da Hoodie and production from the Jamaican hitmaker Rvssian, but the decision not to lean further into that side of her artistry feels like a missed opportunity.

For all Melii’s grit and pluckiness, there’s a bruised core pulsing at the center of the album. She has spoken candidly about her traumas and experiences with anxiety, and her vulnerability appears on the record in flashes. The most pained moment surfaces on “Pretty Girls,” a track that alludes to her history with depression and attempted suicide. “Used to hide my face, never knowin’ ’bout my fate, / Almost took my life, who knew I’d be great?” she raps before opening the song up to other women struggling with mental-health issues. “If you feel this way, hear me when I say it / Trust me, it will be all right, / I used to be just like you.” Melii has never shied away from confronting such issues; her past covers include a version of Logic’s PSA-style song “1-800-273-8255,” named for the toll-free number of the National Suicide Prevention Lifeline. The writing risks falling flat in places, yet her performance is a naked one that contrasts with the tough and sultry songs on the release.

Melii clearly relishes her ability to depict different dimensions and personas. However, it might be that, having already established herself as a rap talent, she is more interested on phAses in extending her claim to smoother pop and R&B territory. She’s an artist who can do a lot, and the breadth of her skills is on constant display here. The downside is that she has less time to break into what she’s especially good at: explosive rhymes. Some of the softer songs are anodyne and generic, and her debut album bundles too many of them together, frequently causing the momentum to lag. It’s not until the fourth track that listeners get to hear Melii’s hard edge as a rapper, and these moments can feel too few and far between. Still, the album is compelling as a series of musical snapshots that capture Melii trying out multiple styles and sounds.

Additionally, the versatility she showcases on phAses is indicative of the cross-genre long game that so many artists, particularly women in rap, have embraced as the boundaries of pop music break down and blur together. For hip-hop juggernauts like Cardi B and Nicki Minaj, variety pays off, and they’ve illustrated the rewards that come with pulling off everything from jut-jawed verses to slinky R&B. Melii can keep up and has her own multidimensionality to offer. Even if some of the songs on phAses are less interesting than the artist herself, she leaves no question about her wide-ranging and obvious talent.