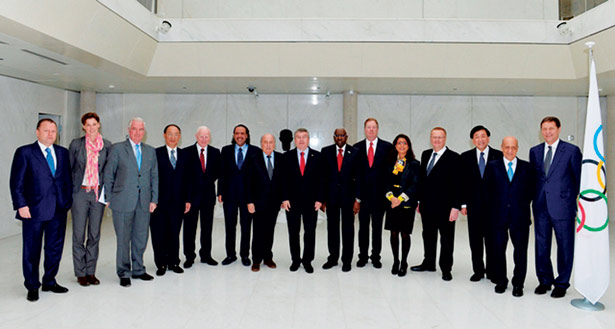 Remember that publicity shot from the Usual Suspects with Kevin Spacey in the lineup? The photo above is an update, snapped late last year in the boardroom of the International Olympic Committee, in a marble palace on the banks of Lake Geneva. This lineup has thirteen men, most past middle age, in business suits and ties, and two women—the big cheeses expecting the best seats in Sochi. Dead center is the new IOC president, Germany’s Thomas Bach. We’ll come back to him, but for now, know that Bach, 60, was a protégé of Horst Dassler, the German businessman who bribed more sports officials than most of us ever heard of. Dassler’s family owned Adidas and a marketing company that laid out $100 million in kickbacks to acquire TV and marketing rights to the soccer World Cup, the world track and field championships—and the Olympics.

At Bach’s right shoulder is the Swiss boss of world soccer, Sepp Blatter. For decades, Blatter didn’t notice hefty bribes being trousered by his colleagues in return for giving World Cup contracts to Dassler companies. Accused of handling a $1 million bribe intended for Joao Havelange, former president of FIFA (the international soccer federation) and doyen of the IOC, Blatter hired investigators who reported that there was a misunderstanding and that he was no more than “clumsy.”

Havelange resigned in disgrace from the IOC in December 2011. Blatter survived—despite losing eight of FIFA’s twenty-three executive committee members to scandals in the past three years. An FBI-organized crime squad, now digging into FIFA’s embedded corruption, has a cooperating witness in Miami and probably another in New York. Blatter, scheduled to be played by Tim Roth on the big screen later this year, might not make it to Sochi.

At Bach’s other shoulder is Lamine Diack from Senegal, president of the IAAF (the International Association of Athletics Federations) and also on the Dassler gift list. I disclosed these bribes for the BBC program Panorama in 2010, and a year later the IOC rebuked Diack. But the Lords of Lausanne forgive and forget, so he’s back at the heart of Olympic idealism.

Looming over the diminutive Blatter, smiling broadly, dark curls tumbling around his shoulders, is Sheik Ahmad Al-Fahad Al-Sabah, kingmaker for Thomas Bach. Fahad is the 50-year-old stripling of the group, a past chair of OPEC, a Kuwaiti royal and by far the richest. Committee members seemed unconcerned by a 2008 US embassy cable, disclosed by WikiLeaks, saying he was “widely perceived as being corrupt.”

Next in line and another attentive supporter of the sheik is Patrick Hickey, 68, who has risen from an unremarkable background in north Dublin, his reputation guarded by a sharp-tongued lawyer. In private correspondence in 1991 with one of the bribe payers on the Salt Lake City Winter Olympics bidding committee, Hickey revealed that some IOC members were selling their votes for $100,000 to rival wannabe Olympic hosts from Nagano. At the time, he was gunning for membership in the IOC, but said nothing to its officials. It has done him no harm that he never snitched.

Hickey gets cozy with people many of us wouldn’t invite home to meet our loved ones. Seeking a wealthy patron in Europe to pay for a regional Olympics to mirror the Pan-American Games and not finding any takers among reputable leaders, Hickey turned to the president of the national Olympic committee of Belarus, whose day job is being Europe’s last dictator. Ignoring Belarus’s unenviable doping record, Hickey presented the thuggish Alexander Lukashenko with a plaque commending his “Outstanding Contribution to the Olympic Movement.” But Lukashenko is broke, so Hickey pursued the oil-rich president of the Azerbaijan Olympic Committee, another head of state. A noted kleptomaniac and jailer of reporters, Ilham Aliyev has reportedly offered millions to fund the event in 2015.

A step away—listen up, NHL people!—is a former dentist, René Fasel, now the Swiss boss of international hockey and one of the biggest cheeses in Sochi. Three years ago, the IOC’s Ethics Commission reprimanded Fasel for a curious deal involving the payment of 1.9 million Swiss francs ($2 million) by a Swiss marketing company to a former school pal for “advice” on acquiring winter sport contracts. Fasel vigorously denied palming a slice but admitted “a case of poor judgment.” The CEO of that marketing company, which obtains massive contracts from FIFA, is Sepp Blatter’s nephew Philippe Blatter. The company uses the offices once occupied by the Dassler company.

Thomas Bach, who won a fencing team gold medal at the 1976 Montreal Olympics, spent a couple of years working for Dassler’s quaintly named “international relations” team. Days before the vote that elevated Bach to Olympic leadership last September, German TV station WDR aired allegations that Bach was involved in—or at least aware of—cheating in the years when he competed (apparently, if fencers held a wet glove to their electric scoring jacket, their opponents’ strikes didn’t register). Bach refused to comment, but his spokesman denies everything.

On elevation to the Olympic presidency, Bach resigned his chairmanship of Ghorfa, a German-Arab business group that emphasizes its boycott of parts made in Israel to ensure its lucrative exports to the Arab world. An Amnesty International official has criticized Ghorfa’s considerable involvement in arms sales to the region, saying it is “not interested in promoting fundamental human rights.”

After the photo lineup at IOC HQ, Bach sped to the UN and talked up the Olympic Truce, an IOC fantasy that claims its sports extravaganza spreads world peace. Global warriors, take note that combat is forbidden off-piste during February. If this delusion ever came to pass, it would depress Olympic “partners” like General Electric, whose engines power death-dealing F-16 fighters and Apache helicopters.

President Bach is at ease with the likes of GE. From the early 1980s, before joining the IOC, he lobbied for the end of amateurism, the starting point for the privatization of the Games. He became a favorite of former IOC president Juan Antonio Samaranch, once sports minister in Franco’s Spain and a thirty-seven-year loyal fascist. I attempted to ask Samaranch why his right arm was more muscular than his left. That got me a seven-year ban from IOC press conferences.

Half of the current 107 IOC members—eight of them princes or princesses—were chosen by Samaranch. His final appointment was his son, Juan Antonio Jr. New members are initiated in a bizarre ceremony, halfway between the style of the mob and the Masons, overseen by the chief of protocol, who used to be Pal Schmitt. He stood down as Hungary’s president in 2012 after being accused of plagiarism and stripped of his doctorate. The IOC removed him as chief of protocol, but he remains a member. The ceremony involves the chief of protocol holding a huge Olympic flag. He swings it down to waist level and the initiate, grasping a corner, swears he (or she) will respect “the decisions of the IOC, which I consider as not subject to appeal on my part.”

Off-camera are other Olympic Committee members: France’s Guy Drut, convicted of fraud but amnestied by former French President Jacques Chirac; Lee Kun-hee, the Korean boss of Samsung, who was convicted of evading $39 million in taxes—but Samsung is an Olympic sponsor and so Lee was forgiven. Then there’s Russian member Shamil Tarpischev, once Yeltsin’s tennis coach. He has problems traveling to the United States: for the past two US Games, in Atlanta and Salt Lake City, his visas were delayed, and then his travel was restricted to the area of the event. In Russia, Tarpischev has been accused of mafia associations—which he denies. It has not helped that he has been photographed with Alimzhan Tokhtakhounov, the Russian mobster accused by the US government of fixing the ice dance medal at Salt Lake City. And Princess Nora of Liechtenstein’s secretive family bank has long been the choice of tax felons and money launderers.

What persuaded the committee to give its prize to Sochi? They assembled in sweaty Guatemala City in July 2007 to watch DVDs from Austria and Korea. The Russians flew in an ice rink and set it up outside the meeting hall. A clear signal: it will be lobster round the clock for you in Sochi.

Despite environmental protests [see Alec Luhn, page 18], outgoing IOC president Jacques Rogge, a Belgian dinghy sailor, has praised the construction in Sochi, unconcerned that the bill is around $50 billion, much of it allegedly siphoned off.

So where’s Keyser Söze? Is he a homophobe in the Kremlin, preparing caviar menus for the Lords? Remember the last “drug-free” Olympics? Check the record books—yes, it was Moscow, 1980 (a Russian journalist who should know has assured me that the KGB ditched the positive drug tests). Where did President Putin learn his tradecraft? Maybe the word in the locker room will be: “It’s safe to get souped for Sochi.”