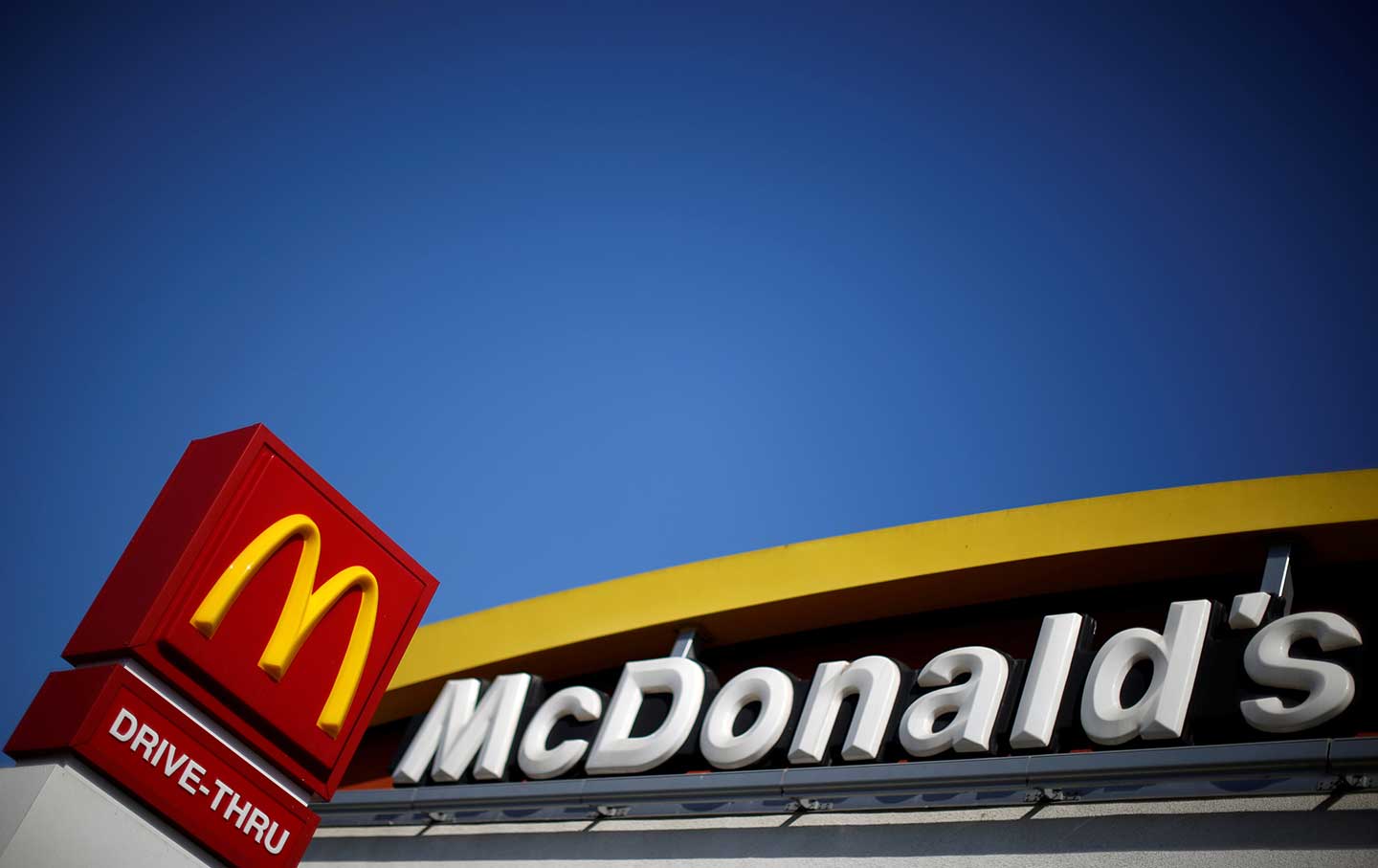 It’s bad enough when you come home from work every night with empty pockets; it’s worse when you start every workday with your boss’s hands stuffed down your shirt. But according to new complaints filed by McDonald’s workers and a nationwide survey, sexual abuse and harassment are rampant at fast food restaurants.

Complaints filed at the federal Equal Employment Opportunity Commission (EEOC) by McDonald’s workers in eight states describe incidents involving unwanted sexual touching, offers of pay in exchange for sexual favors, and retaliatory threats to keep workers silent while providing service with a smile. In the complaints and accompanying video testimonials, as reported at The Huffington Post, the campaign presented stories of both men and women being stalked, grabbed, kissed and subjected to solicitations and taunts about “liking penis.” Andrew McConnell of Kansas City, Missouri, recalled his manager spitting “faggot” at him before he got sacked. CyCei Monet of Flint, Michigan said that after being repeatedly groped and rubbed by a manager, she reached her “breaking point” after he texted her a picture of his penis. It cost her $8.50 an hour to quit; many can’t afford to.

Although sexual harassment is rampant across all industries, systematic sexual degradation at fast food workplaces, a major employer of low-wage workers nationwide, ties into both economic and sexual coercion. Being desperately poor obviously renders workers exponentially more vulnerable to abuse. Kristi Maisenbach tried to challenge repeated workplace harassment at her Folsom, California, McDonald’s restaurant, and her manager repaid her by slashing her weekly hours by two-thirds. “When you’re barely making enough to get by,” she told The Huffington Post, “speaking up means risking your check, your next hot meal, your electricity bill.”

Workers aired more painful stories at a recent Fight for 15 rally near Times Square—once ground zero of New York’s sleaze industry, now home to “family-friendly” chain restaurants, where another sordid industry lurks behind the counter. Gaby, a soft-spoken teenager, spoke through a Spanish translator about working her first job at a fast food outlet in Washington Heights, working for $10.50 an hour under the leering gaze of a supervisor who regularly propositioned her. He “asked her sometimes to go back [to a part of the workplace] where there’s no cameras,” she recalled. Her complaints to the general manager went ignored. Her alleged abuser, her main supervisor, told her “if I didn’t do it, he was going to do something to retaliate, and he ended up taking me off the schedule,” effectively firing her after seven months. She said she never received training on how to handle workplace sexual harassment.

Gaby’s mother accompanied her to the rally and talked afterwards about how her daughter had been “very affected, and I don’t like to see Gaby like that.” She had seen similar practices working at a Long Island fast-food restaurant years ago, along with a brutish system of “preference” in the workplace hierarchy.

“A lot of workers do it just to get higher positions,” her mother said. “But some people like me and my daughter, we said no, we didn’t allow them to do it. Some people who allow that type of behavior get better hours, and they get a better schedule.”

Alongside the complaints, the SEIU-backed Fight for 15 campaign released polling data on more than 1,200 fast-food workers showing that about 40 percent reported experiencing some kind of workplace sexual harassment: About a quarter had faced “sexual teasing, jokes, remarks, or questions,” and a quarter had been accosted with “unwanted hugging or touching.” Nearly one-fifth experienced invasive sexually explicit questions about themselves or others. Workers also reported being asked to expose their bodies, being offered favors in exchange for sexual favors, even rape.

Nearly half said the harassment they suffered took a health toll, including depression and diminished performance at work. Black and Latina women were especially vulnerable to harmful ripple effects like being forced to quit or change their schedules. About four in 10 said they “feel that they need to accept it because they cannot afford to lose their job.” Maria Munoz testified that managers had witnessed repeated incidents of brazen harassment by customers, getting called a “young sexy Latina,” but dismissed her complaints, calling it “just playing around.”

The pattern is mirrored in other industries, from domestic work to marketing firms: According to the EEOC’s analysis, anywhere from 25 percent to 85 percent of women report having experienced sexual harassment in the workplace. Harassment based on sex is the most prevalent source of harassment claims received by the EEOC last year.

Following the complaints, McDonald’s stated to media outlets, “There is no place for harassment and discrimination of any kind in McDonald’s restaurants or in any workplace. We take any concerns seriously and are reviewing the allegations.”

Yet it’s unclear how much McDonald’s really has over its tens of thousands of franchise outlets because it has deliberately structured its franchise model to minimize its legal liability for the working conditions at its outlets. Generally, the workers at franchise restaurants are considered employees of the franchise operators, not the corporation itself.

The EEOC complaints, however, target McDonald’s as the boss. It’s part of a broader strategy to force McDonald’s to take legal responsibility as a “joint employer.” Similar litigation pending at the National Labor Relations board, along with various other lawsuits, could soon determine McDonald’s legal status as an employer under federal law, opening the door for key labor protections, including collective bargaining rights. Unionization could be key to combating sexual harassment and other labor abuses, in addition to giving workers unprecedented leverage to secure higher wages.

For now, the sexual-harassment claims force McDonald’s into the awkward position of having to distance itself from a pattern of abuse festering under the golden arches.

Whether or not the EEOC claimants win their cases, they’ve issued a moral and legal challenge to fast food giants: either assume their responsibilities as joint employers and address the abuse, or let franchise operators tarnish their brand while workers pay the price for a management structure that banks on their economic, social, and sexual exploitation. They may ultimately squirm out of their responsibility, but the stories workers have told clearly trace the chain of shame from drive-thru window straight up to the executive suite.