Few critics saw the writing on the wall quite like Mark Fisher. The writer, lecturer, and theorist always knew that art and politics couldn’t be separated. Drawing from a diverse collection of recording artists like David Bowie, Joy Division, and Drake, Fisher saw music as a window into capitalism’s effects on identity, economics, and politics, and had a knack for turning heady academic ideas into accessible ways for understanding art’s place in society.

K-punk: The Collected and Unpublished Writings of Mark Fisher

In the aftermath of his tragic death last year, news of the loss spread rapidly across social media, where fans struggled to put words to the power of his work; from the humble beginnings of his beloved blog, k-punk, to the pervasive influence of his books, Fisher’s writing became ground zero for a different kind of cultural criticism, one as insatiably enthusiastic for pop culture as it was unshakably cutting, urgent, and radical.

Across three books, numerous magazine pieces, and hundreds of short essays, Fisher established a vast and totalizing worldview defined by his thoughts on capitalism, media, and the afterlife. In the wake of the 2008 financial crisis, Fisher coined the term “capitalist realism” to describe a specific belief increasingly common with politicians in both the UK and North America, that no matter how bad things were under capitalism, the roughly 300-year-old political and economic system had become the only viable option—with it all but impossible to imagine any realistic alternative to the current global marketplace.

Building on the work of Fredric Jameson and Slavoj Žižek, Fisher regarded the expression that “it is easier to imagine an end to the world than an end to capitalism” as more than mere Marxist fatalism; his 2009 book, Capitalist Realism, approached film, literature, and music as a lens into the phenomenon for which it was named—a manifesto for some lasting alternative to global capitalism, inspired by the art he loved. But before their inclusion in Capitalist Realism, almost all of the writing here existed in earlier forms as essays and posts on Fisher’s blog, k-punk.

Started in 2003, k-punk began as a low-stakes way for Fisher to return to what he loved about writing after finishing a PhD at the University of Warwick; unlike the rote, and sometimes draconian, demands of academia, blogging (then a thriving practice in 2003) fostered an intimate community of like-minded readers for Fisher, including well-known experimental musicians like Kode9, Tim Hecker, Holly Herndon, and the Caretaker. “In near real time, k-punk wrote about a world in flux, and continues to demonstrate how with artful wit, compassion, and a lot of good music, we might be able to invent a better one for each other,” Herndon recently shared with Crack magazine. “We are all still catching up to [Fisher’s] vision.” 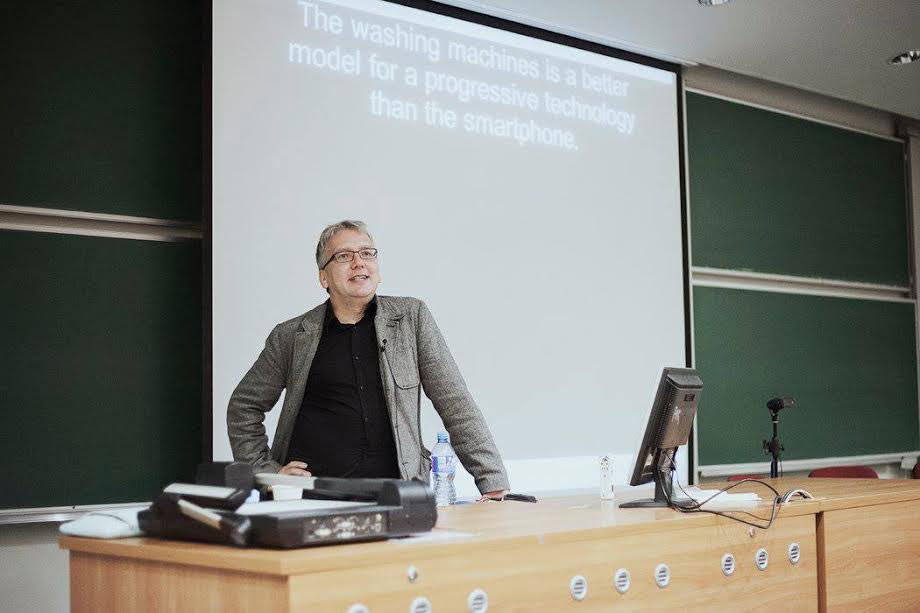 Released this November, K-punk: The Collected and Unpublished Writings of Mark Fisher (2004–2016), does what its title suggests, compiling over a decade of blog posts, interviews, and unpublished manuscripts into an 800-page archeological testament to the digital life of Mark Fisher. Once called a “one-man magazine superior to most magazines in Britain,” the blog achieved a cult-like following in its prime, and Fisher served as a kind of ringleader of the site’s chaotic community. With its voracious, salon-style comment section, the blog became the central hub of a sprawling network of Fisher’s own creation, spreading further and further with its electric and constantly evolving readership.

In some ways k-punk raised the bar, daring academics to speak plainly all while challenging bloggers and critics to wade deeper into political theory. In an essay on Stanley Kubrick’s The Shining for the culture journal Perforations, Fisher borrowed the term “hauntology” from Jacques Derrida’s Spectres of Marx, describing nostalgia’s diminishing returns as part of a broader failure to envision any progressive future for popular culture in the present moment. The term later served as the guiding force of Fisher’s second book, Ghosts of My Life, which, in addition to showcasing his writing on film, includes essays on Kanye West, James Blake, and Burial. For Fisher, hauntology was an era-defining feeling, a unified spirit of 21st-century cultural production where the wistful melancholia of albums like ambient musician William Basinski’s 9/11 elegy, Disintegration Loops embodied the collective depression of a generation, providing the soundtrack for a whole decade of smoldering economic decay.

At its best, Fisher’s work wrestled with big questions about art’s emancipatory potential in a moment when few cultural critics ever seemed interested in politics. Years before the horrors of the 2016 election, Fisher’s influential essay “Exiting the Vampire Castle” cut to the dripping, pulpy heart of neoliberal individualism, noting the need for class-conscious solidarity in the face of a globally dismal political future. In the aftermath of the Arab Spring and Occupy Wall Street movements, a now-familiar story of social media’s significance as a tool for grassroots organizing was then only just taking shape. Always resistant to simplistic narratives, Fisher believed that online bickering, mostly by way of shortsighted identity critique, was really doing more to harm the progressive left than anything to come from hand-wringing centrist media outlets.

Despite the blowback it received initially, with critics quick to note that the essay merely traded an aestheticization of online identity politics for a similarly aesthetic appeal to the working class, Fisher’s critique that social media is, beneath all else, “dedicated to the reproduction of capital” feels increasingly necessary today, especially at a moment where online infighting often has very real consequences for grassroots efforts. Yet, like a lot of his writing, it wasn’t until after Fisher’s passing that the work was ever truly recognized for the wisdom it contained at the moment of publication.

Read front to back in print, it’s striking how well each idea in K-punk fits into Fisher’s broader project, a kind of makeshift mental map of the author’s psyche. In its last section, the collection includes the unfinished introduction to what would’ve been Fisher’s fourth book, Acid Communism. Framed as a history of socialist utopianism dating back to the 1960s, the introduction sets its sights on overcoming the crisis of capitalist realism, charting a new direction toward some semblance of socialist abundance for all. In its discussion of songs like the Kinks’ “Sunny Afternoon,” the Beatles’ “I’m Only Sleeping,” and, most crucially, the Temptations’ “Psychedelic Shack,” the work feels like a post-capitalist call for less work, more stability, and a new countercultural politics set on realizing collective consciousness. “Mass culture—and music culture in particular—was a terrain of struggle rather than a dominion of capital,” he writes. “What if the counterculture was only a stumbling beginning, rather than the best that could be hoped for?”

In the wake of his passing last year, the left mourned the loss of one of its most astute critics, a thinker as committed to identifying the movement’s shortcomings as he was to building a robust, legitimate alternative to today’s sense of decline. “What’s certain is that we are now in an ideological wasteland in which neoliberalism is dominant only by default,” he wrote in 2013. Five years on, nearly every diagnosis Fisher produced across roughly 15 years of writing rings true. Now more than ever, his project for a better future feels like a guiding light.