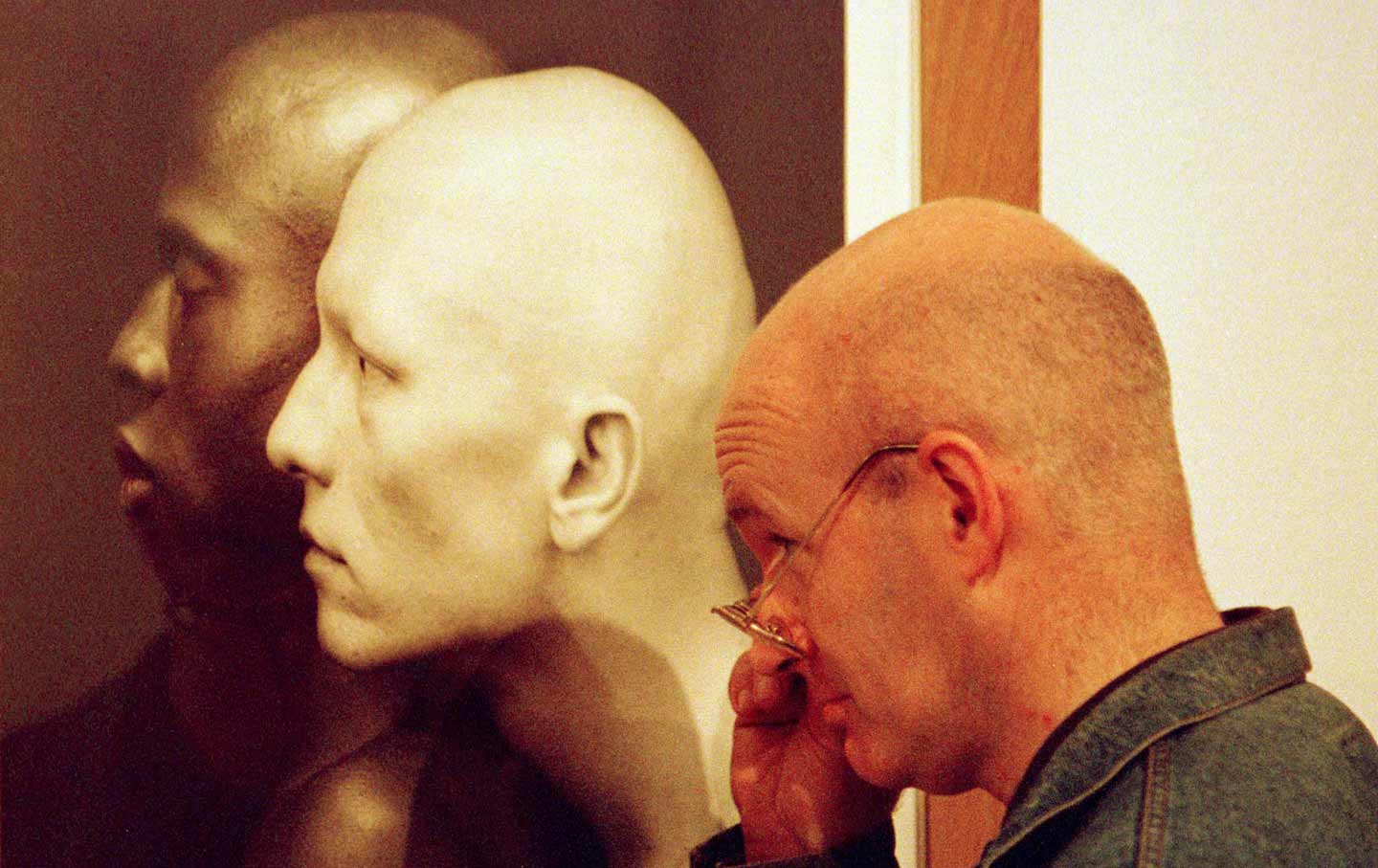 An art critic takes a close look at one of Robert Mapplethorpe’s photographs. (Reuters)

There’s a darkly funny and truly unsettling moment about halfway through Mapplethorpe: Look at the Pictures, the terrific new HBO documentary, which premiered on April 4, about Robert Mapplethorpe, the openly gay Queens-born photographer who shocked the world with his graphic gay S&M pictures before he died of AIDS in 1989.

His former lover and confessor Jack Fritscher leans into the camera and says, “I have to say that, because nobody will say it.” He pauses nervously, then continues, “Not to put [Mapplethorpe] down, but…Satan, to him, was not this evil monster. Satan was like a convivial playmate”—a truck or some construction interrupts him—“having a jolly good time seducing the maidens.” Fritscher is alluding to Mapplethorpe’s deep foray into a nocturnal world of multiple sex partners and extreme acts. “To me, it was a bridge too far.”

But the ominous noise from somewhere continues. Then Fritscher calls, agitated, to someone else in the house, “Can we close the doors? I’m getting awfully cold.” The audience around me—at the Los Angeles County Museum of Art, where a massive Mapplethorpe retrospective just opened—laughed uneasily at the idea of Mapplethorpe, in his black leather, dropping in from the dark afterworld on a surviving lover just as he divulges his judgment of Mapplethope as a gleeful devil.

The moment underscores the power of this lavishly sourced documentary by Fenton Bailey and Randy Barbato, the duo that has brought us, among several other documentaries, the runaway cult TV hit RuPaul’s Drag Race. As with that show, this doc enjoys knife-sharp editing, with an eye for stray facial expressions or vocal tics that serve as perfect ironic buttons for intense moments. But what is really important about Look at the Pictures—in addition to its being the first tautly told tale of Mapplethorpe’s life and work for those not familiar—is the frankness with which it re-coronates the artist as a prince of darkness, a title he would surely endorse.

Almost 30 years—and much cultural evolution, vis-à-vis queer sexuality—have passed since Mapplethorpe died, looking for several months prior (as in this iconic self-portrait) like a handsome cadaver as he delighted in the macabre spectacle of his work’s value skyrocketing on the eve of his demise. We’ve lost some of the sting of AIDS since then, the need to frame all who’ve died of it as angels, as we did in the days of ickily well-meaning films like Philadelphia. Such a hagiography might work better for Keith Haring, another gay artist who, like Mapplethorpe, ascended in the 1980s and died, a year after Mapplethorpe, also of AIDS. Haring’s work also embraced gay male sexuality—but did it with a childlike joyfulness, in bright, stylized colors. His gay images feel of a piece with a life that was about being a beloved and accessible public artist, a painter in New York City’s democratic and multicultural streets, with strong overtones of liberty and justice for all.

Those were not the tones of Mapplethorpe’s black-and-white work—either the graphically gay images or his hyper-polished compositions of black men, cut flowers, or socialites. As an abundance of taped interviews with Mapplethorpe makes clear in the documentary, he had no qualms with disgusting people, using them, or both to create the iconoclastic body of work that secured the fame he so ruthlessly sought. A documentary that aimed to soften his cold, hard edges for a millennial audience new to his work just wouldn’t be honest.

Thankfully, that’s not what we get. Mapplethorpe: Look at the Pictures doesn’t shy away from the fact that the artist found beauty in darkness and extremity, nor the fact that, amid the singular pursuit of fame, he was also both creepy and a bit of a creep. “Life is about using people and being used by people, and that’s what a relationship is all about,” Mapplethorpe tells us. When he talks of meeting Sam Wagstaff, the handsome, older, wealthy curator, who became his lover and devoted himself to cultivating the photographer’s success, Mapplethorpe says, “He was a very attractive man. He also happened to have what seemed like vast amounts of money. If he didn’t have the money, I may not have been involved with him, you know? But you can’t separate it. And that’s what was so good about Sam—is he knew that that was part of the package, so to speak.” Anyone who confesses his own unflinching ambition with such calm candor likely wouldn’t want to be memorialized as an angel.

LIKE THIS? GET MORE OR OUR BEST REPORTING AND ANALYSIS

But that’s not to say the film paints a hateful picture of Mapplethorpe. Far from it. Through interviews with his father, sister, and friends from youth, it clarifies the outsized influence that Catholicism, with its sometimes grisly images of bondage and suffering, had on Mapplethorpe’s work. (He was fond of arranging images, or even models, into cross or crucifix shapes.) The artist’s exile from his working-class Queens family feels as much based on his macho father’s disgust with him as on his cosmopolitan ambitions. (In the doc, his father says he’s glad that Mapplethorpe never overtly came out to him, as that would have only made matters worse. That’s hard to hear.)

Interestingly, the doc doesn’t delve—as does Patricia Morrisroe’s juicy and somewhat contemptuous 1995 biography—into the hazing, proto-dominant-submissive relationships, that the slight, boyish young Mapplethorpe had with older students while an ROTC member at Brooklyn’s Pratt Institute, a college that in the 1960s was divided between “manly” engineers and hippie-ish artists. (Mapplethorpe quickly made the transition from one clique to the other, walking around campus in a black cape with a pet monkey on his shoulder and embarking on a daily drug habit that would last his whole life.) Those experiences would seem to go a long way toward explaining his future obsession with leather and S&M, and it’s somewhat odd that the documentary doesn’t at least mention them.

And though it’s hard not to admire Mapplethorpe for saying that he took the iconic photo of himself with a bullwhip in his anus after an S&M model suggested that if he was going to exploit others then he should exploit himself as well, it can be hard not to cringe when hearing him talk about why he turned, in the late 1970s, to photographing black men. “I often say that photographing black men is like photographing bronze,” he says. “It became an obsession with me, taking these pictures of blacks.… For the most part, when whites have photographed blacks, they’ve sort of shown them from a certain social point of view. I’m photographing them as form, in the same way that I’m reading the flowers.… I’m not attempting to make a social statement about their plight.”

Extolling the aesthetic project of the work, Mapplethorpe doesn’t seem to know how objectifying he sounds. And certainly his images of black men have been extensively critiqued by black artists and writers including Glenn Ligon, Lyle Ashton Harris, and bell hooks, who has said the works uphold “the racist/sexist iconography of the black male body.”

But those notions are complicated, somewhat, in the film when we hear from the funny and exuberant Jack Walls, one of those black models, and who was also Mapplethorpe’s lover for most of the 1980s. Spying Mapplethorpe at an opening of his black-male images, “I said, ‘That’s gonna be my boyfriend,’” recounts Walls, adding, “We rarely fought, you know, because he was too self-absorbed to really care. It was so easy to be around him, because he was so busy being Robert Mapplethorpe.”

And regarding 1984’s Ken Moody and Robert Sherman, among Mapplethorpe’s best-known images, we learn from those two models that Sherman was in front of Moody in the photo not because—as some have interpreted—it represented some racialized statement, but because Moody’s neck wasn’t long enough for them to do the reverse. The two men, reunited for the documentary, laugh as they recount this. It’s a reminder that art takes on lives and meanings of its own—or, more to the point, of our own—regardless of its creation story.

In the immediate years after his death, Mapplethorpe’s work—like that of fellow photographer Andres Serrano (of the Piss Christ controversy) and performance artists Karen Finley, Holly Hughes, Tim Miller, and John Fleck—became embroiled in Reagan-Bush-era culture wars around censorship and government funding of art. Dramatically framing Mapplethorpe’s importance in pushing forward our ideas about art versus pornography, the documentary opens and closes with those wars, showing us the late right-wing Senator Jesse Helms fulminating against Mapplethorpe’s work on the floor of Congress and the sensational 1990 Cincinnati court trial in which the art museum there was accused of obscenity for exhibiting his work— to sold-out crowds, natch. (In a victory for art and free expression, the museum was acquitted.)

Such attacks on his work, as well as his death from AIDS, posthumously positioned Mapplethorpe, in part, as a victim—of homophobia, of an epidemic, of puritanism. Edward, his younger brother—who worshipped Robert, worked for him, and followed in his career footsteps—has the problematic last words in this riveting documentary: “Whatever it took to become Robert Mapplethorpe was what it was going to take—and it took his life to do it. Literally.”

That’s bullshit. Mapplethorpe came of age in an era of sexual awakening for straight and gay people alike—but one in which only gay men, by a cruel twist of nature that sadly dovetailed with homophobic beliefs, died in droves. To suggest that his life was the price he paid for partaking in the very extreme acts that made him famous plays into the belief that he, and men like him, deserved what they got. Mapplethorpe himself would likely recoil at such an idea. A truer remark is made by Edward earlier in the film, talking about the homoerotic images that he, somewhat awkwardly, would soon help his brother produce: “He loved to get a jolt out of people—a reaction.”

Mapplethorpe knew exactly what he was doing. Even when those around him said he’d never get rich or famous making beautiful versions of dirty gay photos, and even as he shot flowers and socialites to make money, he stuck, with an artist’s conviction, to the idea that his tough, uncomfortable, sexual images of men were what would secure his place in art history. He was right.