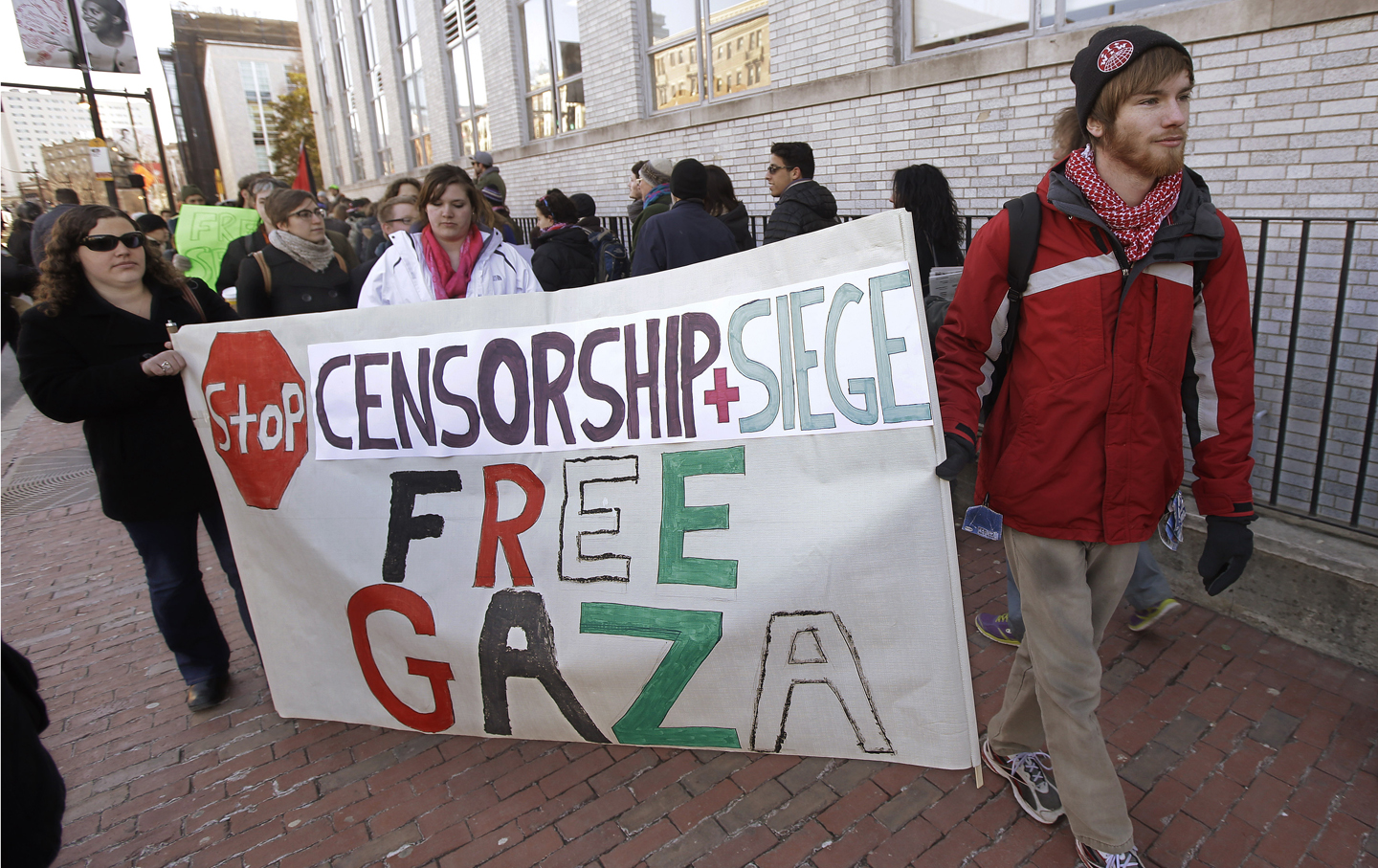 A protest at Northeastern University following the suspension of its Students for Justice in Palestine chapter. (AP Photo/Stephan Savoia)

When Palestinian-American professor Steven Salaita received the e-mail that he was being fired from a tenured position at the University of Illinois at Urbana-Champaign, he was crushed. “Everything had been arranged for our move,” Salaita explained. “Our son—he was 2 at the time—had been enrolled in a daycare in Urbana, on campus in fact, and I felt this terrible sense that I had failed my family…. We were left without health insurance, first of all…and so we were constantly worried about what would happen if the need for medical attention arose and the fact that if something did happen to any of us, we could end up spending the rest of our life in severe debt.”

Professor Salaita’s case, unfortunately, is not unique. Students and professors seeking to change the status quo in Israel/Palestine are frequently censored, punished, or subjected to baseless legal complaints. They are branded as “uncivil” or “divisive” or falsely accused of supporting terrorism and anti-Semitism when they hold events, distribute fliers, or support the growing boycott, divestment, and sanctions (BDS) movement.

On September 30, Palestine Legal and the Center for Constitutional Rights released a groundbreaking report documenting the widespread suppression of Palestine human rights advocacy in the United States. Over an 18-month period, from January 1, 2014, through June 30, 2015, we responded to nearly 300 incidents of censorship, punishment, or other burdening of advocacy for Palestinian rights. Eighty-five percent of these incidents targeted students and scholars.

After 30 years of public-funding cuts, cash-strapped universities rely on private donors more than ever.

It seems absurd that on a US college campus, where principles of academic freedom and free speech are presumed to be among the strongest in the world, that professors are censured for expressing criticism of a nation-state, or that students are summoned by administrators and forced to explain why they are “singling out” Israel. (When Donald Trump’s corporate sponsors began to desert him in droves because of racist statements he made, no one asked why he was being singled out, when there are others with far worse records.)

Yet this is the kind of speech suppression that Palestine Legal has consistently witnessed in the three years my organization has been documenting the suppression of Palestine activism in the United States.

How did we get to the point where students speaking out for Palestinian rights—and professors writing about them—often face overwhelming, disproportionate pressure to censor their speech?

After 30 years of public-funding cuts, cash-strapped American universities, both public and private, rely on private donors more than ever. The Koch brothers alone gave a total of $12.7 million to 163 US colleges and universities in 2012. The billionaire conservatives also fund, through the Donors Capital Fund, anti-Palestinian groups such as CAMERA and Stand With Us, in addition to Daniel Pipes’ Middle East Foundation, which in turn has acted as a “conveyor belt” for funding ultra-Zionist organizations such as the Brandeis Center and the AMCHA Initiative, according to the International Jewish Anti-Zionist Network, which analyzed these groups’ tax returns in a recent report.

Israel advocacy groups such as these have been at the forefront of campaigns to pressure universities to investigate, punish, and censor Palestine activists. They have kept dossiers on pro-Palestinian activists, falsely accused Students for Justice in Palestine chapters of having ties to Hamas, tried to get an Israeli professor’s Cal State speaking tour canceled, complained to the California State Controller that a Palestinian-American scholar’s research trip to Palestine constituted an abuse of state funds, and urged Congress and the Department of Education to defund Middle East studies programs because they have an “anti-Israel bias.”

Much as in Congressional politics, these big donors and Israel advocacy groups use a menacing combination of carrots and sticks to enforce an anti-Palestine agenda (casino mogul Sheldon Adelson convened a summit that reportedly raised “at least $20 million” to combat BDS efforts this past June). Sticks include Title VI complaints to the Department of Education’s Office for Civil Rights claiming that student speech critical of Israel—such as a film screening on the occupation or a teach-in called “Understanding Gaza”—are “offensive” and “hurtful” to Jewish students and create a hostile, anti-Semitic environment on campus. The DOE has rejected these complaints (including ones filed against UC Berkeley, UC Santa Cruz, UC Irvine, Rutgers, and Barnard), but a chilling effect can still be felt. If any of these complaints are successful, schools can lose their federal funding.

Indeed, one pressure group encouraged pro-Israel activists to continue filing Title VI complaints, despite the DOE’s rejection of the California cases, precisely because they have a chilling effect on Palestinian rights activism. “The point is not to win individual cases,” said Kenneth Marcus, president of the Brandeis Center, which filed the complaints against the three UC campuses. “The point is to change the culture on campus.” (The Brandeis Center later bragged that UC Santa Barbara agreed to hold trainings by the Anti-Defamation League—an organization that itself has urged universities to crack down on pro-Palestinian speech on campus—if the center withdrew its Title VI complaint.)

While university administrators feel the brunt of the pressure to curtail activism for Palestinian rights, student governments are increasingly targeted by Israel advocacy groups. At a hearing at Northeastern University this past spring, student senators blocked the student body from voting on a referendum asking trustees to divest from companies that profit from Israel’s occupation. In its decision not to allow the vote, the student government cited concerns that donors would pull funding if students expressed criticism of Israel. It was likely not lost on the senators that Robert Shillman, who donated $3 million for the construction of a Northeastern lecture hall bearing his name, is also a “major supporter” of the Zionist Organization of America, which has pressured Northeastern to crack down on what it called anti-Israel professors and on its Students for Justice in Palestine chapter. (The ZOA also tried to censor a teachers’ workshop at Columbia University in June, complaining, among other things, that the course title was inaccurate “since there is presently no country called ‘Palestine.’”)

Indeed, Israel advocacy groups have lobbied student governments at the University of Toledo and UC Berkeley, and have taken UCLA student government leaders on all-expenses-paid trips to Israel in the lead-up to divestment votes. These free trips are offered to student leaders across the country, who “are expected to take what they have learned back to their campus communities.”

In the academic realm, public-records-act-request documents reveal that donors threatened to stop giving to the University of Illinois at Urbana-Champaign if Steven Salaita was allowed to begin teaching after tweeting passionately about the suffering of Palestinians in Gaza over the summer of 2014. “Having been a multiple 6 figure donor to Illinois over the years I know our support is ending as we vehemently disagree with the approach this individual espouses,” said one e-mail.

For every professor publicly fired for Gaza tweets or scrutinized for research trips to Palestine, there are so many more who have been questioned by administrators on their research, talks, or papers perceived to be critical of Israel’s policies. Graduate students have reported to Palestine Legal that advisers told them not to pursue scholarship on Palestine, and to stay away from Palestine activism if they wanted to have a viable academic career. As the partner of a professor, I am all too aware of Words That Must Not Be Said, as if Palestine was Voldemort and the mere mention of it might summon a state into being.

Cases like Salaita’s are precisely why the American Association of University Professors drafted its founding document on academic freedom in 1915. Indeed, the concept of academic freedom arose from concerns that railroad barons and businesses employing children were exerting undue pressure on university trustees to fire professors advocating for worker protections and an end to child labor. And those railroad barons, whose names still adorn campuses such as Stanford and Vanderbilt, show us the carrot side of the equation: The politically contingent promise of future donations is potentially even more pernicious than legal threats.

Israel advocacy groups and big donors like the Koch brothers and Shillman are akin to the railroad magnates of our day. Contemporary universities, starved for cash and increasingly governed by professional managers, are too willing to throw academic communities perceived to be supportive of Palestinian rights under the bus in exchange for protecting the endowment. They sacrifice fundamental pedagogical principles to avoid public relations nightmares that come with being accused of tolerating anti-Israel–or pro–Palestinian freedom—speech on their campus. Despite these measures, the movement for justice in Palestine continues to grow. Instead of suppressing speech supporting Palestinian rights, colleges should allow open debate on one of the most important issues of our time, lest they find themselves on the wrong side of history.