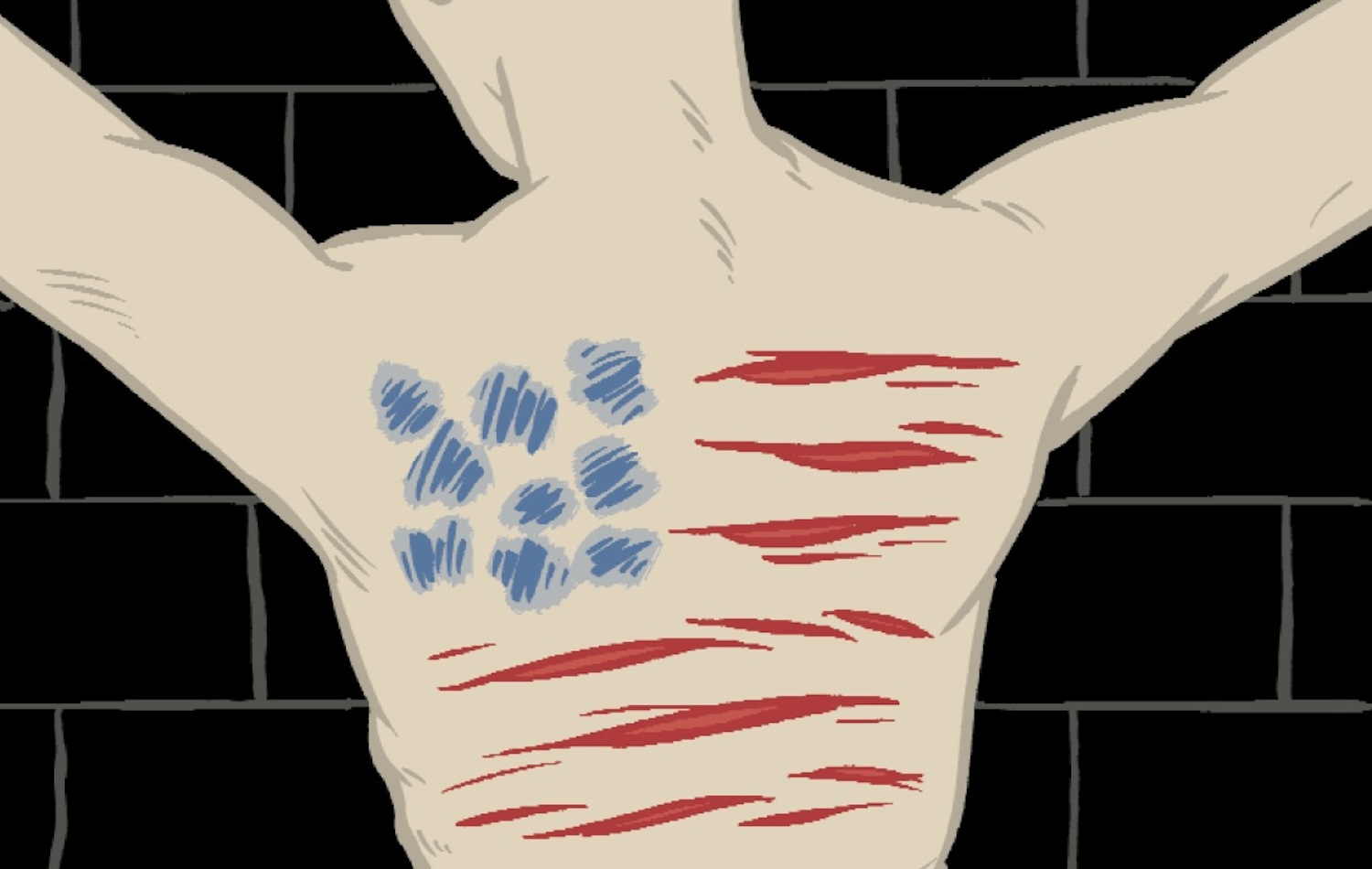 As the first national anti-lynching conference met in New York City in May of 1919, The Nation described that particular brutality as the American iteration of “the habit of torture,” which had somehow survived beyond “the primitive years of mankind.”

“As a rule,” the historian Edward Raymond Turner wrote, recounting several recent lynchings, “the story of these things is hushed up. If the disgrace is felt at all, it is stifled, and the infamy is soon forgotten. Occasionally this is not possible, and then the event may be taken…to point a moral and bring repentance and atonement to our civilization.”

Whatever the motive of torture, “nothing can explain it away, as nothing can remove the shame and disgrace of it,” Turner concluded.

Woe to those who permit it in their midst! Not only shall their fair name be gone, but they themselves are in danger; they must expect to see this hideous thing, lurking darkly in society, plague them in the administration of their prisons and asylums, show itself in the ordinary life of the base and uncouth whenever they get power, and sometimes, when the madness of men becomes the lust and unreason of the mob, burst forth with all the frightfulness it had long ago in ages of the past.

Surely, it would shock and awe the wise and prophetic Edward Raymond Turner, risen from history, to discover that ostensibly respected—if not quite self-respecting—Americans in 2014 are still defending the morality of torture. And yet here we are. “I’d do it again in a minute,” saith the Dark Lord of the Sith himself.

But almost as unseemly is the media’s portrayal of Dick Cheney as outside the mainstream of American political opinion: that he is, but it wasn’t always so. As Digby writes at Salon, “It must be acknowledged that members of the media were among the first to call for torture…. Even though the excuses these days are all about how the chaos of the early days and the pain of the attacks led the government to ‘make mistakes,’ that’s really no excuse.”

It never was one. From the very beginning, immediately after September 11, The Nation warned of the inalterable consequences of a retreat from the very ideals of “civilization” in whose name the “war on terror” itself was ostensibly being waged. Responding to the infamous Jonathan Alter column in Newsweek (November 5, 2001), titled “Time to Think About Torture,” The Nation’s Alexander Cockburn seethed:

What’s striking about Alter’s commentary and others in the same idiom is the abstraction from reality, as if torture is so indisputably a dirty business that all painful data had best be avoided. One would have thought it hard to be frivolous about the subject of torture, but Alter managed it.

“Start torturing,” Cockburn wrote, “and it’s easy to get carried away. Torture destroys the tortured and corrupts the society that sanctions it.”

It was the same argument that had been offered in The Nation by Edward Raymond Turner, who might have been forgiven for resting easily in his grave under the assumption it would not need to be made, at the opening of the following century, yet again.

The Nation of March 31, 2003, would have reached readers during the first week of the American invasion of Iraq, but the cover story wasn’t about that war. Rather, “In Torture We Trust,” by Eyal Press, considered “the absence of debate” over the use of torture against captured insurgents in the ongoing Afghan war. Press noted that absence “may simply reflect a preoccupation with Iraq, but it may also signal that in these jittery times, many people see torture as justified.” Among those in the media whom he then quoted was Judge Richard Posner, arguing in The New Republic—remember that rag?—that “if the stakes are high enough, torture is permissible. No one who doubts that this is the case should be in a position of responsibility.” In their recent sally over at Al Jazeera America, Alex Gourevitch and Corey Robin pinpoint this tone of swaggering bellicosity as one of the cardinal sins of the publication: “Almost as if the very thought of peace, or just caution, was a vice. With each engagement, it was the American soul, not other people’s bodies, that was at stake.” The old New Republic has been raked over the coals for its racism and its gutless imperialism, but its role as early advocate for the use of torture ought not to be missed.

It will surprise nobody that the deepest, most poignant, most haunting writing about torture to appear in the pages of The Nation—since Edward Raymond Turner, of course—was produced from the now thunderously silent pen of the late Jonathan Schell. In “Torture and Truth” (June 15, 2009), Schell took aim at President Obama’s expressed desire to focus on “getting things right in the future, as opposed to looking at what we got wrong in the past.” Setting to one side the harm to the prisoner, the utter immorality of the practice and its counter-productivity, Schell wrote:

The wound goes deeper. Even as the torturer shatters the world of his victim, he assaults the foundation of his own world, although he does not know it. Indeed, his blindness is a consequence of the torture, even a condition for it. The torturer and his victim are close to each other. There is physical contact. Yet in every other respect they are as distant as it is possible for one person to be from another. In the moral and affective vacuum that has been generated, sympathy, empathy, pity understanding—every form of fellow-feeling—have been reduced to absolute zero…The power of the state that tortures may be increasingly fictional, but the degradation of its civilization is real.

Those symptoms are brought on, of course, not just by the torture but by society’s reaction to it. The interrogator faces his choice when the order to torture comes down from on high. The people face their choice when reports of what he did are made public, as is happening. If the people choose denial, the pathology of torture tends to reproduce itself in the society at large. The result is a kind of cognitive dislocation, which can be more or less severe. Fundamental human capacities begin to atrophy or are impaired. Certainly, abuse of human beings and abuse of words go hand in hand. The words that name the deed fog over, or are driven from the language. Refusal to face the fact of torture has cost us the very word “torture,” now widely referred to, as if in obedience to some general edict, as “enhanced interrogation techniques” or “harsh methods.” Torture’s writ thus runs in the editorial rooms of newspapers.

Thus Dick Cheney’s recent, um, tortuous efforts to coherently define torture and explain why what the United States did to its prisoners was not described by it. But beyond psychology and linguistics, Schell indicated, the scars of torture ran even deeper than even most critics of the practice have ever been willing to admit:

At an even deeper level, the bonds that connect the very tenses of human life—past, present and future—may start to come unglued. It is in this context that our new president’s determination to get things right in the future by ignoring what went wrong in the past is troubling. Here, the past per se is at risk of being demeaned by a sort of guilt by association with torture. The other two tenses, though seemingly preferred, do not escape unharmed. The danger is most obvious in the legal system, where it is precisely the past—the precedent of law plus the factual record of the case—that determines the future to be taken. Someone brought into court for dealing drugs is not invited to say to the judge, “Let’s not look at the past; let’s concentrate on getting the future right.” But more than the legal system is at stake. For whatever else civilization may be, it is surely intercourse between past, present and future. Without the past to guide it, judgment about the future is reduced to clueless conjecture, and without informed judgment about the future, we wander lost in the present.

Better to look the torture in the face and having looked, to remember, and having remembered, to respond, and having responded, to call those responsible to account so that we never do this again.

The purpose of the anti-lynching conference in the spring of 1919 was to encourage Congress to pass legislation making lynching a felony, prosecutable by the federal government. The Dyer Anti-Lynching Bill, supported even by Warren Gamaliel Harding, would have also made it a crime for local officials not to protect individuals in their jurisdiction or not to prosecute lynchings once they had occurred. In 2005, the House of Representatives formally apologized for never having passed anti-lynching legislation “when action was most needed.”

Action is needed now. Lynching is torture, and torture is lynching. Officials who authorized torture—who sent the United States back to “the primitive years of mankind”—must be prosecuted. Cops who kill young black men today at a faster rate than they were lynched during Jim Crow must be prosecuted. “The haunting symmetry of a death every three or four days links us to an uglier time that many would prefer not to think about,” Isabel Wilkerson wrote in The Guardian back in August, “but which reminds us that the devaluation of black life in America is as old as the nation itself and has yet to be confronted.” Noah Berlatsky, in his Pacific Standard review of Edward Baptist’s The Half Has Never Been Told, writes: “American decency has always been more a theory than a practice and America’s most important value—the value that turned this country from a marginal economic unknown to a world-straddling imperial power—was torture.” These things must not be hushed up. Lynching is torture, and torture is lynching. Woe to those who permit either in their midst!

The Nation‘s December 26, 2005, issue was entirely devoted to what the cover called “The Torture Complex.”

“‘Never Before!’ Our Amnesiac Torture Debate,” by Naomi Klein

“The Torture Administration,” by Anthony Lewis

“Secrets and Lies,” by Karen Greenberg

“An Army of Lawyers,” by Lisa Hajjar