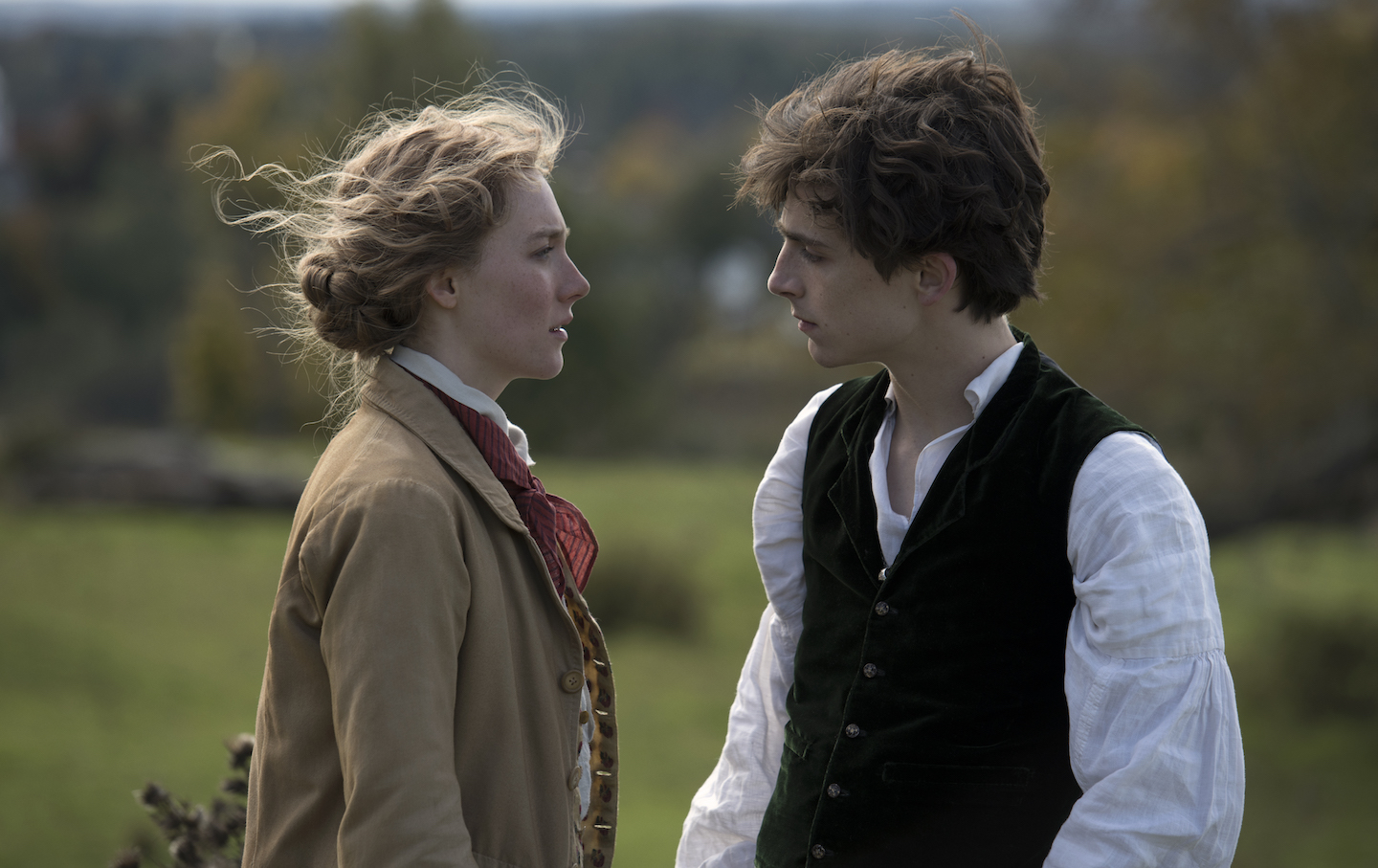 A 1927 poll of high school students found that Little Women was the book they considered the most influential, ahead of the Bible, which came in second. This was 10 years after the first silent film adaptation of Louisa May Alcott’s novel and nine years after the second. The first major studio production of Little Women premiered in 1933, when set designers could still order the wallpaper patterns found in Orchard House, the family home where Alcott wrote her novel, directly from their manufacturers. In its review, The New York Times described Katharine Hepburn’s portrayal of heroine Jo March as being “as vital, sympathetic and full of the joie de vivre as one could hope for” and enthused, “Imagine a picture concerned merely with the doings of a healthy-minded family!”

In 1949, MGM remade Little Women in Technicolor, featuring Elizabeth Taylor as a weapons-grade selfish Amy, her styling as the youngest March daughter complete with swaths of eyeliner. Less than a quarter of a century later, a tepidly received BBC miniseries was criticized along women’s movement lines for equating marriage with self-actualization. Then came Gillian Armstrong’s 1994 remake, starring Winona Ryder, Susan Sarandon, and a baby-faced Christian Bale, the first film adaptation written and directed by women. The legend of the ’90s remake comes with an Alcott-esque origin story of writer Robin Swicord and producer Amy Pascal spending 12 years pitching the film to male executives who didn’t believe a movie with five female leads could be a box-office success.

With seven film adaptations, at least 10 television adaptations (including two animes), several plays, and one opera, Little Women is one of the most-adapted works of American literature, something I was surprised to learn after watching Greta Gerwig’s Little Women, which premieres on Christmas Day. News of the film’s release was met with enthusiasm and a decent amount of surprise: the gleeful, clamoring surprise of an early gift, but surprise nonetheless. Perhaps Little Women adaptations follow something like the 30-year trend cycle; it’s not only Little Women that summons nostalgia but specifically the Little Women of one’s childhood.

To explain this, I need to cite my elder sister, Anne. A couple of years ago, she said how much it delighted her that the 1994 Little Women is so unapologetically a document of ’90s third wave feminism, with March matriarch Marmee’s diatribes about the negative health effects of corsets and her lectures on the benefits of education. Of course, these themes aren’t fabricated; all of these ideas are present in the original Little Women, but the wonderful thing about adapting a 536-page novel is that Swicord could pick and choose lines that could have also appeared in a Bikini Kill song.

Although a reviewer of the 1918 film worried that fans of the book would find the movie “a sort of sacrilege,” the magic of Little Women adaptations does not come from their faithfulness to the source material alone. The wallpaper might be right, but the tone of each film is openly, gloriously anachronistic. They are pictures of their own time cast through the prism of Alcott’s novel. For example, in 1933, the Marches’ frugality has a nationalistic bent, and in 1949, four years after V-E Day, their neighbor and surrogate brother, Laurie, is conspicuously not Italian. Gerwig’s adaptation faces two challenges: to be a good film and—a more delicate calculation—to mark how we can imagine women (as sisters, as antagonists, as wives, as workers) in our own time.

Unlike previous adaptations, Gerwig’s film begins in medias res: Grown-up Jo (Saoirse Ronan) is struggling to become a writer in New York City and returns home to Concord, Massachusetts, when she learns that her sister Beth (Eliza Scanlen) is seriously ill. The familiar scenes—balls, plays, Christmas breakfasts given away, disastrous haircuts—appear mostly in memories Jo recalls in between fitful bouts of sleep on her train ride north. The structure naturalizes the jumbled, episodic quality of the story as the product of a protagonist hurrying home; the new structure also helpfully introduces Professor Bhaer—whom Jo will marry—much sooner. Gerwig has chosen to depart from Alcott by casting Louis Garrel, who is young and sexy, as the professor; in the book, Alcott tells us, somewhat cruelly, that the character “was neither rich nor great, young nor handsome, in no respect what is called fascinating, imposing, or brilliant.”

A subthesis to the idea that each Little Women film marks the gender attitudes of its time is that certain characters get more or less favorable treatment, depending on the era. It is very easy to dunk on poor, materialistic Amy during the Great Depression. Marmee (Laura Dern in the most recent version) is always wise and observant, but Gerwig restores a scene from the novel left out of earlier adaptations, in which she expresses a quiet rage familiar to contemporary feminists: “I’m angry nearly every day of my life,” she tells Jo, “but I have learned not to show it.” Beth tends to be sidelined from the time her sisters leave home until her death, but Gerwig uses Beth’s struggle with illness to frame the film, making her newly central to its narrative. 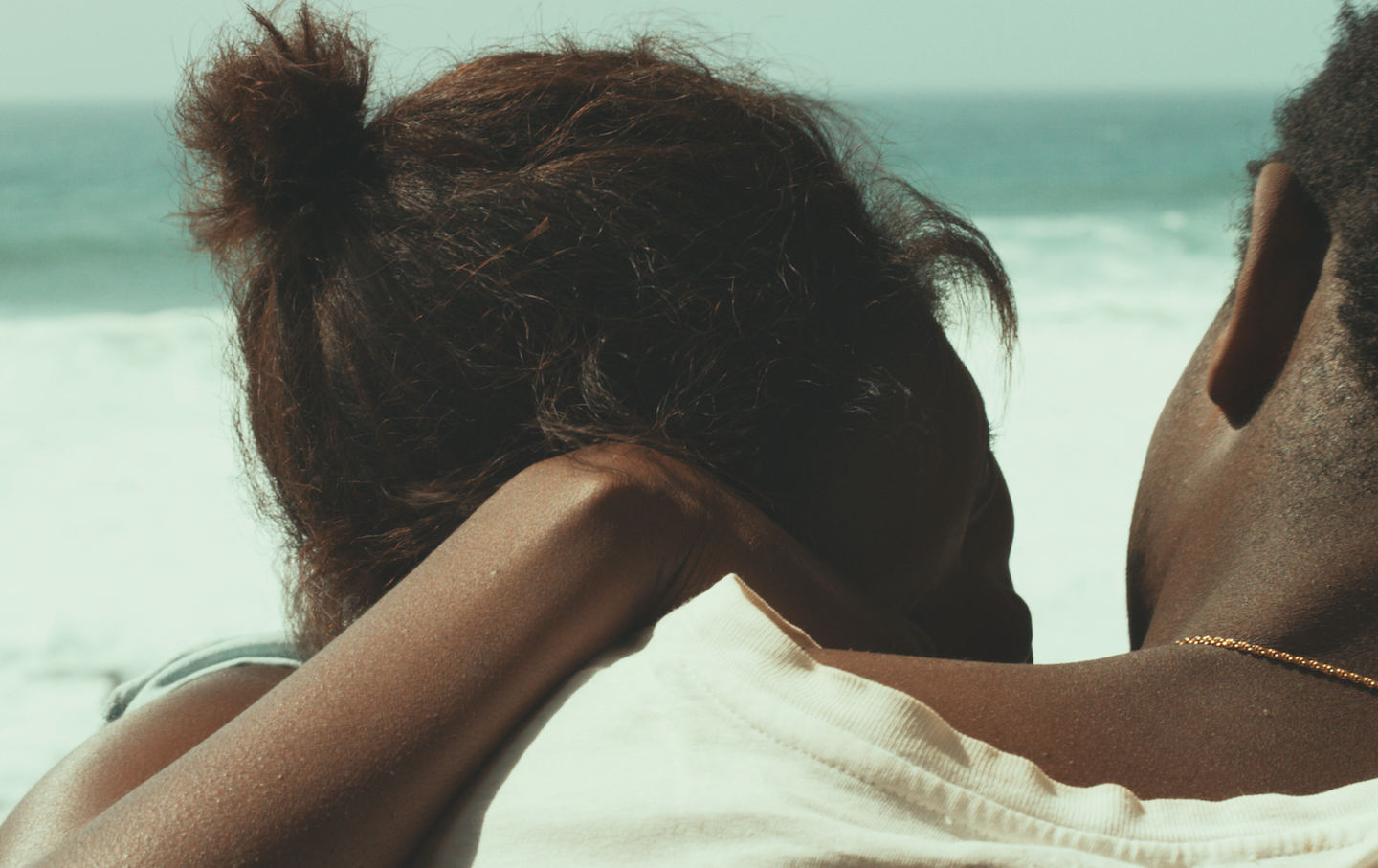 Mati Diop’s ‘Atlantics’ Is a Startling Study of Power

Beth is a tricky character to get right. Alcott writes that “there are many Beths in the world, shy and quiet, sitting in corners till needed, and living for others so cheerfully that no one sees the sacrifices till the little cricket on the hearth stops chirping.” She is frequently described as sick, simple, and good and thus appears in adaptations as a naïf or a particularly bland saint. But this doesn’t do justice to the strength of her feelings, the brisk independence with which she makes decisions, and the depth of her understanding of disability and of her own mortality. In a scene in the new film set on a gray New England beach, Beth gently rebukes Jo for her refusal to face the possibility of Beth’s own death, which marks the point at which Jo begins to appreciate that the inner worlds of her sisters are as rich as her own.

Gerwig also treats Amy (Florence Pugh) more generously. Her obsessions with upper-class manners, luxury goods, and acquiring a perfect nose aren’t caricatured or portrayed as a foil to Jo’s nonconformity but are presented, in part, as an economic decision. At one point, Aunt March (Meryl Streep) exhorts a young Amy, “Marry well. Save your family.” Amy, mute but calculating, listens. When Laurie, played by Timothée Chalamet, goes to her painting studio in Paris years later to flirt with her by criticizing her plan to marry the wealthy Fred Vaughn, she’s brisk, almost rude, instead of kittenish in her rebuttal. She rattles off suffragist talking points about property and child custody laws and tells him, “Don’t sit there and talk about how marriage isn’t an economic proposition, because it is.”

Of course, Alcott’s Amy would have never been so direct. But that’s the point of a Little Women adaptation: Bhaer and Amy and Jo and Beth satisfy a contemporary hunger for hot, empathetic, and vaguely anti-capitalist heroes and heroines. For example, Gerwig devotes a luxurious span of the film’s 135-minute running time to contract negotiations between Jo and her publisher. (The publisher urges her to sign away the copyright for $500; Jo refuses and argues up her share of royalties.) The economic challenges women face are a theme in every Little Women adaptation, but they’re seldom rendered in such detail. Here, they can be dealt with through confrontation with the boss or by making a clear-eyed decision to monetize one’s femininity.

Gerwig’s film approaches a structural reading of the marriage plot in Little Women, a story Alcott based on her family’s life. There are details linking Jo and her creator—Alcott trained herself to be ambidextrous in order to write more efficiently when one hand tired, and Gerwig’s Jo does the same—and the book Jo publishes at the film’s conclusion is titled Little Women. In a closing scene, she debates with her publisher whether her protagonist has to get married. At first, she’s obstinate: The girl in her book will stay single. The publisher insists that a marriage is the ending readers want. She relents, and the film cuts to Jo’s romantic reunion in the rain with Bhaer and we learn that, despite Jo’s recalcitrance, this story ends with a marriage, after all.

Alcott never married. “I am more than half-persuaded that I am a man’s soul, put by some freak of nature into a woman’s body,” she told Louise Chandler Moulton, a contemporary poet and critic who interviewed the author for a biographic profile published in 1884. Moulton wrote that Alcott’s blue-gray eyes “sparkled with laughter” when she asked why, and she replied, “Well, for one thing, because I have fallen in love in my life with so many pretty girls, and never once the least little bit with any man.”

In Little Women, Jo wishes she had been born a boy frequently enough to make it her motto. My hope for the next adaptation is that the screenwriter and the director might take her at her word, might understand Jo’s wish not only as a response to the political status of women in the 19th century but also as an expression of a deeper, more personal longing. It might elucidate certain things. The scene in which Jo rejects Laurie’s proposal has always felt, to me, like a rupture in the story. Laurie asks Jo why she doesn’t love him, and she can’t explain; there is something she cannot articulate. “I don’t know why I can’t love you as you want me to,” she says in the novel. “I’ve tried, but I can’t change the feeling, and it would be a lie to say I do when I don’t.”

Jo and Laurie have a close and loving relationship. They fight constantly, but they understand each other in a milieu determined to misunderstand them both. I have struggled to understand why Jo chooses older, unsexy, not “fascinating, imposing, or brilliant” Bhaer over her closest friend. But Alcott said that she was “never once the least little bit” in love with a man, and this, perhaps, extends to her characters. In this light, Bhaer may have been conceived less a person than a literary device to sell books, like the neat marriage plot ending Jo’s publisher asks for in the conclusion of Gerwig’s film.

Unlike Bhaer, Laurie has real-life analogues. The character was inspired by Ladislas Wisniewski, a Polish musician whom Alcott met in Europe, and her friend Alf Whitman. Knowing this, one wonders if Jo’s rejection of Laurie is an act of kindness, even mercy. Jo can’t reciprocate her friend’s romantic love, so she offers a blunt, opaque rejection—“I’ve tried, but I can’t change the feeling”—rather than fit him into a story line in which he doesn’t belong. Little Women was commissioned as a book for girls, and it made Alcott rich; she was as aware as anyone what her characters could or could not say. The power of adaptation is to fill in the subtext.