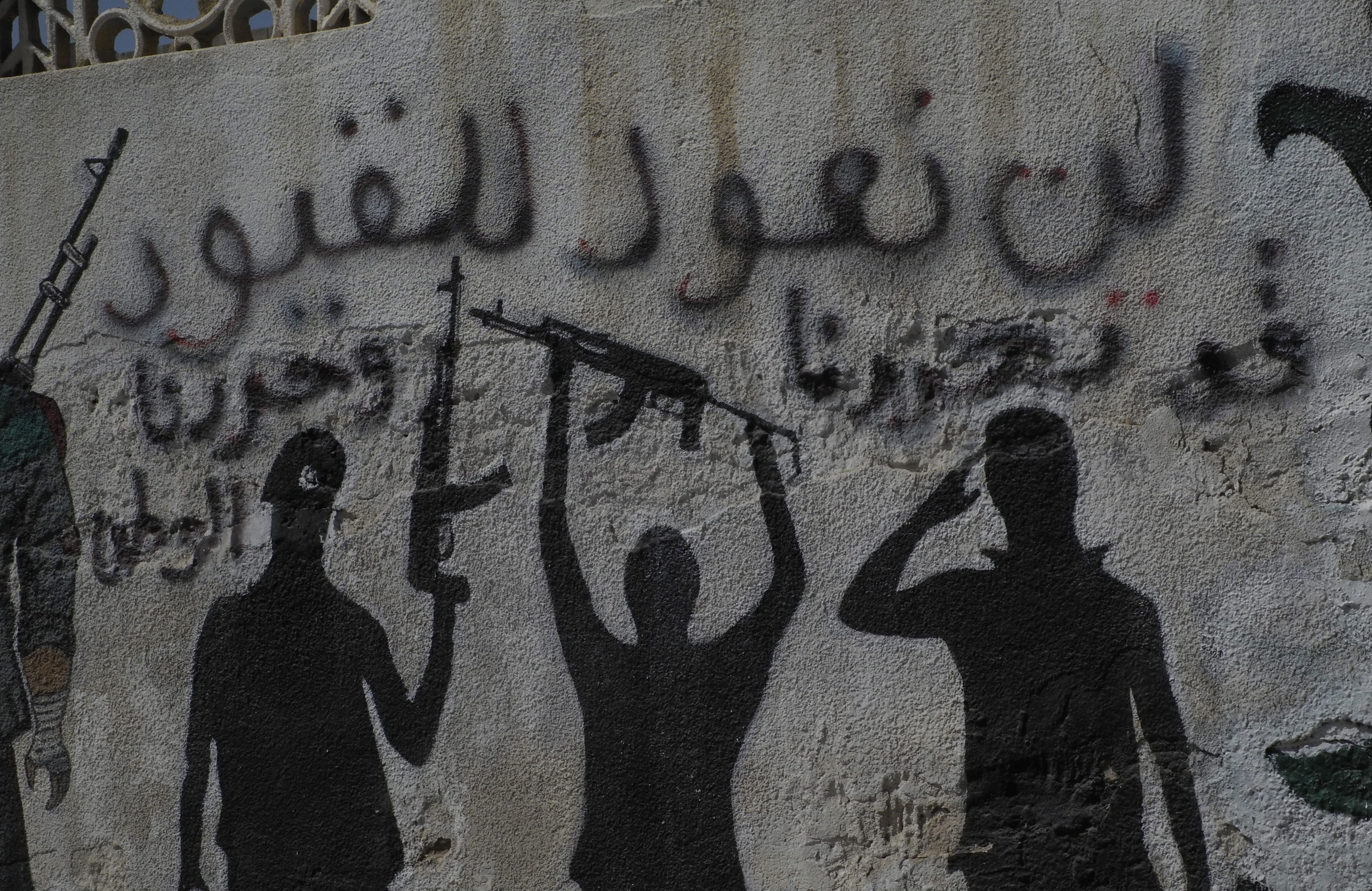 Libya is teetering on the verge of its worst crisis since the 2011 overthrow of the Qaddafi regime.

Last month, forces loyal to General Khalifa Haftar launched a brazen assault on the sitting national congress in Tripoli, accusing the Islamist-dominated Parliament of being complicit with hostile militias and of fostering terrorism.

Proclaiming an anti-Islamist offensive to rid the country of what he calls foreign-sponsored terrorism, Haftar called for the suspension of Parliament and for a new council to take over running the country. Haftar had reportedly been planning the coup attempt for over a year, quietly solidifying his military power to gain political authority. While the Parliament remains intact and has approved new Prime Minister Ahmed Maiteeq in a vote of confidence, the situation remains tenuous. Now General Haftar’s chosen tactic appears to be to use extralegal force to attack Islamist militias in hopes of garnering support for a future electoral bid.

A member of the small band of military officers who took part in the 1969 coup that installed Muammar Qaddafi, Haftar was later captured in Libya’s war with Chad in the mid-1980s. Apparently sour on Qaddafi, in Chad he was reportedly part of a unit of commando soldiers trained and organized by the United States to overthrow the Qaddafi regime. After the Chadian government itself fell in 1990, Haftar was granted asylum in the United States, where he spent twenty years in Virginia—just miles from CIA headquarters—as an active figure in the Libyan opposition movement.

Haftar was a leader of the military wing of the National Front for the Salvation of Libya (NFSL) throughout the 1990s, which he claims received assistance from the CIA. According to historian Dirk Vandewalle, US and French support enabled the military wing of the NFSL, the so-called Salvation Forces, to carry out a number of attacks against the Qaddafi regime over the years. The Salvation Forces were one of the few clandestine groups that reportedly had the capacity to target Libyan government officials traveling outside Libya.

Haftar returned to Libya after the uprising against Qaddafi began in 2011, arriving in Benghazi to command rebel forces under authority of the National Transitional Council. Distrust within the NTC of Haftar’s connections with the US government, however, led to serious infighting and the appointment of another commander to lead the rebels, Abdul Fattah Yunis. Yunis was later assassinated by rebels in eastern Libya, highlighting the internal strife among the opposition.

In March 2011, as NATO’s intervention in Libya was getting under way, US President Barack Obama predicted that Libya would face serious challenges to ensuring stability, a result of what he called forty years of tyranny that had left “Libya fractured without strong civil institutions.”

Qaddafi’s legacy is surely relevant. But the current instability is also a direct result of the NATO intervention itself, which fueled the proliferation of armed militias and heavy weaponry in the country and has contributed to the spread of arms throughout the region

The Libyan Intervention and Its Aftermath

The mandate for the use of force in Libya was based on UN Security Council Resolution of 1973, which authorized international military force to protect civilians (UNSCR 1973). But the ostensibly humanitarian mission quickly expanded from protecting civilians under assault by government and paramilitary forces to ensuring the overthrow of the Qaddafi regime.

France was the first nation to admit to providing arms, ammunition and tanks to the Libyan rebels, acknowledging that it had air-dropped more than forty tons of arms and munitions and smuggled tanks via Tunisia. Qatar also provided weapons, including modern French-manufactured anti-tank missiles, and the United Arab Emirates (UAE) shipped matériel—all with the approval of the United States. Investigations conducted by the UN Panel of Experts on Libya found that both Qatar and the UAE violated the arms embargo established in UNSCR 1970 (the resolution passed before 1973) by directly providing weapons and ammunition to the Libyan opposition. Reports also indicate that special operations forces from the United States, United Kingdom, France and Qatar provided tactical support and training to the rebels while collecting information on the ground for NATO strikes.

The foreign involvement directly shifted the tide of war and helped transform Libya’s plethora of insurgent militias into powerful armed brigades. But the intervening powers failed to ensure that a proper disarmament, demobilization and reintegration (DDR) program was enacted after the war. Instead, they left Libya a heavily militarized country in the hands of non-state armed actors—like Haftar’s forces—that have battled for control in scattered pockets of the country. Reports estimate that approximately 1,700 armed groups emerged from the rebel forces that fought during the 2011 conflict.

Lacking the manpower or political will to consolidate control, Libya’s postwar government has relied on the revolutionary militias to provide security in Tripoli and across the country. The February 17 Brigade, for example, was tasked to provide security for the US consulate in Benghazi—a decision that may have facilitated the 2012 attack on it that killed Ambassador Christopher Stevens.

It has become abundantly evident that the goals of many of these militias are far from democratic. Powerful rebel forces have committed serious abuses, targeting and displacing groups perceived as having been loyal to Qaddafi. UN bodies and human rights organizations have also documented sweeping detentions by the rebel factions in the wake of the war, as well as the regular practice of torture in the prison system under control of the non-state armed actors.

Although the United States reportedly approved many of the weapons shipments that were paid for and supplied by Qatar and the UAE, US officials later voiced concern that the weapons, including French and Russian-designed arms, were ending up in the hands of Islamist militants. Indeed, the UN Expert Panel determined that “the deliveries of arms and ammunition during the uprising in Libya were completed without any control measures on the ground, resulting in the uncontrolled movement of materiel.”

As a result of both an influx of arms and the interim Libyan government’s failure to secure the Qaddafi regime’s weapons, arms trafficking has exploded in Libya, turning the country into a source of weapons for conflicts all over the region. Trafficking patterns have followed routes from Libya to the Sahel, as well as from eastern Libya to Egypt and on to the Gaza Strip. UN experts have identified cases involving more than twelve countries in the region where heavy and light weapons, including man-portable air defense systems (MANPADS), have been transferred illicitly.

The spread of weapons from Libya is fueling conflicts in other countries at an alarming rate. According to the UN Panel of Experts, the Libyan conflict had a severe impact on countries in the Sahel, such as Mali and Niger, where “new armed opposition groups have emerged, and greater space for terrorism organizations and international criminal networks has opened.” Reports indicate that the Boko Haram insurgency in Nigeria has been bolstered by weapons from Libya as well, including AK-47s, rocket-propelled grenades, rocket launchers and anti-aircraft missiles.

The Syrian conflict has also been exacerbated as a result of an influx of both rebel fighters and weapons from Libya. Former Libyan rebel commanders, such as Mahdi al-Harati, have given interviews to reporters from within Syria, where they say they are fighting with the Free Syrian Army. Reports of Libyan weapons flowing to Syrian rebels started circulating as early as November 2011 with the approval of the NTC. Syrian-bound weapons are reportedly routed through Turkey and are said to include rocket-propelled grenades and portable surface-to-air missiles that have assisted the rebels in targeting the Syrian Air Force. The UN Panel of Experts found that these transfers “have been organized under the supervision, or with consent of a range of actors in Libya and the Syrian Arab Republic and in countries neighboring the Syrian Arab Republic.”

The lack of consideration for the possible consequences of the Libyan intervention can only be regarded as a dramatic strategic failure on the part of the United States and its NATO allies. The failure to make the connection between conflicts that spread across borders is demonstrative of a myopic approach to policymaking, where officials base decisions on immediate concerns without sufficiently taking into account longer-term ramifications. This approach to conflict situations only examines isolated contexts, without considering corresponding transnational threats and global concerns.

The recent assault on the Libyan Parliament and the rampant arms proliferation stemming from the country should serve as cautionary tales about the unintended consequences of foreign military intervention in the Middle East and North Africa.