The Kids Are All Right

I thought some at The Nation would appreciate this picture of my son, age 19 months, with the Dec. 5/12 issue. This wasn’t staged: He grabbed it and started “reading” with genuine concern. Apparently, we can be hopeful about the next generation—as long as we can give them a habitable world to grow up in.
Henry Pratt
highland, n.y. 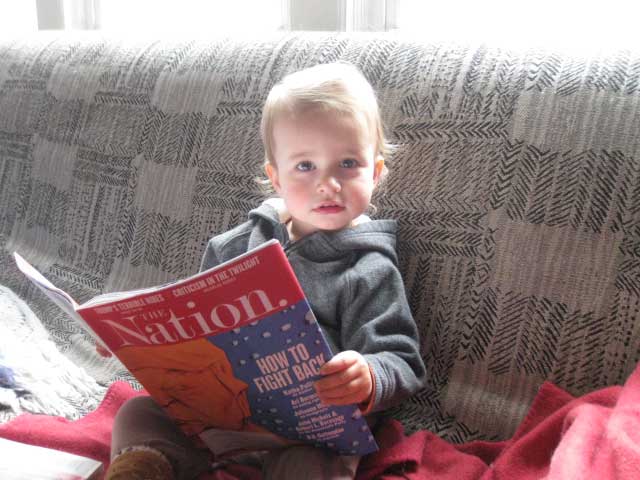 D.D. Guttenplan’s article in the same issue [“A People’s Revolt”] recommends that we give some credit to those who voted for Trump: Rather than regard them as racist and misogynistic “deplorables,” we should consider how their populist sentiments were shut out by the Democratic Party. Can the party really turn itself completely inside out and appeal to all those (including Trump voters) who could constitute a progressive majority? As I said, I am skeptical.

Nichols is right that “no major party has been replaced since Henry Clay’s Whigs,” but I think it’s going to be hard to convince anyone (including me, a lifelong Democrat) that the same old “Democratic Party” name contains a truly new reality. I think we are at a historic turning point in the politics of this nation, so big changes are probably needed. We need a party that is of, by, and for the people.

I think Abraham Lincoln said some version of that. And he was a Republican, wasn’t he? And wasn’t it the Republican Party that replaced the Whigs, picking up the disillusioned Whig voters who wanted an end to slavery? That’s the way I remember it.

I agree with Bill McKibben [“How the Active Many Can Overcome the Ruthless Few,” Dec. 19/26] that we will have to take to the streets to protest against the Trump regime’s rape of the environment and other policies. But we can go on the offensive for the environment as well, by demanding that states, cities, and other local governments still controlled by the Democrats make their buildings more energy-efficient by installing solar panels, replacing old lighting with LEDs, adding insulation, and replacing old vehicles with electric or hybrid cars. We can also urge “blue” cities, counties, and states to set up low-interest revolving-loan funds to enable school districts, smaller governments, nonprofits like day-care centers, homeowners, and businesses to go solar and energy-efficient.

A few years ago, I joined with a moderate Republican in Illinois to pass legislation setting up low-interest revolving-loan funds to allow fire departments to purchase expensive firefighting equipment. The concept can be used for fighting climate change as well. Incidentally, such legislation can be put on the ballot by citizen petition in many “red” states.

I was happy to see that The Nation endorsed the National Popular Vote initiative in your Dec. 19/26 editorial, “Drop the College.” I’ve been telling friends and colleagues about it for weeks, and no one seems to have heard about it.

The initiative’s website (nationalpopularvote.com) encourages people to write their state legislators and urge them to pass this bill. Blue states and swing states that haven’t yet enacted the bill include Colorado, Connecticut, Delaware, Florida, Maine, Michigan, Minnesota, North Carolina, New Hampshire, New Mexico, Nevada, Ohio, Oregon, Pennsylvania, Virginia, and Wisconsin—far more than the 105 electoral votes needed to get this thing to apply nationally. So please, readers in these states, contact your state legislators today! As John Nichols explains in his editorial, the disproportionate power of the right will only get worse as more people move to the coasts and to populous urban centers in proportion to the middle of the country—unless we manage to eviscerate the nation’s arcane Electoral College system.

D.D. Guttenplan is right on in his article “Mourn, Resist, Organize” [Nov. 28]. But for the umpteenth time I read that “Obama remains…a hugely popular president.” Really? As someone who has spent his life in farming and ranching in the Southwest, and who is by definition one of those “low-information” types, I dare not presume to tell the pundits either how or where to take their polls, nor how to interpret them. But I can make a few anecdotal remarks which, although they do not live up to the standards of science, should be taken seriously.

Ask any farmer, rancher, or miner, or drive into town and ask any fast-food or Wal-Mart employee, or anyone who must make their living as a wage-earner, and you will find the following: As a rule, they do not give President Obama high marks. I could drive to the next ranch over and argue with my neighbor that because of Obama, we might just stop beating up on Cuba and Iran—a good thing—and thus the outgoing president deserves high marks. And my neighbor would likely agree that this is indeed a good thing. So why would this rancher, this farmer, this miner, etc., give Obama a failing grade and refuse to vote for Clinton? Simple: Their lives, our lives, have remained exactly the same or, in many instances, become much worse in the last eight years—and, indeed, far longer—while the bankers, the Wall Street types, the CEOs, and corporate America generally have seen their lives vastly improve. Do those in the know really wonder why Trump got the vote?