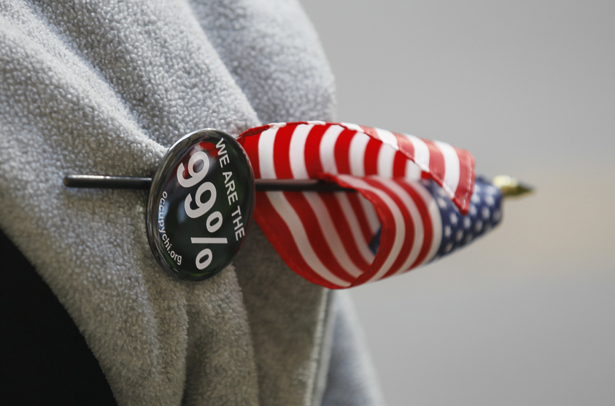 Sarah Anderson, director of the Global Economy Project at the Institute for Policy Studies, recently asked in a speech at the New Populism Conference in Washington, “Why should our tax dollars subsidize economic inequality?” Why must you and I foot the bill, via our taxes, for the callousness of Walmart or Domino’s?

The chasm between C-suite pay and minimum wage may be wider than ever before—in 2013, according to the AFL-CIO, CEOs of Fortune 500 companies made 774 times as much minimum-wage workers—but, as Anderson points out, many people have grown tired of waiting for a solution to emerge from the maw of Washington and are instead taking the initiative themselves. “Just like on the minimum wage,” Anderson told the conference, “people aren’t waiting for Washington to lead on CEO pay. We’re seeing an unprecedented explosion of bold creative action outside Washington.” In Sacramento, Providence and other capitals, state-level activism and legislation are taking care of business that the House and Senate have chosen to ignore.

In California, Senate Bill 1372, introduced by state senators Mark DeSaulnier and Loni Hancock, lets the state raise the corporate tax rate, currently 8.84 percent, to as high as 13 percent for companies whose highest-paid executives earn more than 100 times what their typical employees earn. Companies with a CEO-to-typical-worker pay ratio below 100-to-1 would get a tax cut, down to as low as 7 percent. “Under the bill,” Inequality.org reports, “all firms with a ratio under 100-to-1 would end up with a tax cut, all above with a hike.” And California corporations that might be eyeing an end-around via outsourcing would see their tax rate increase by fifty percent if they exhibit a decrease in full-time employees and an increase in “contracted and foreign full-time employees.”