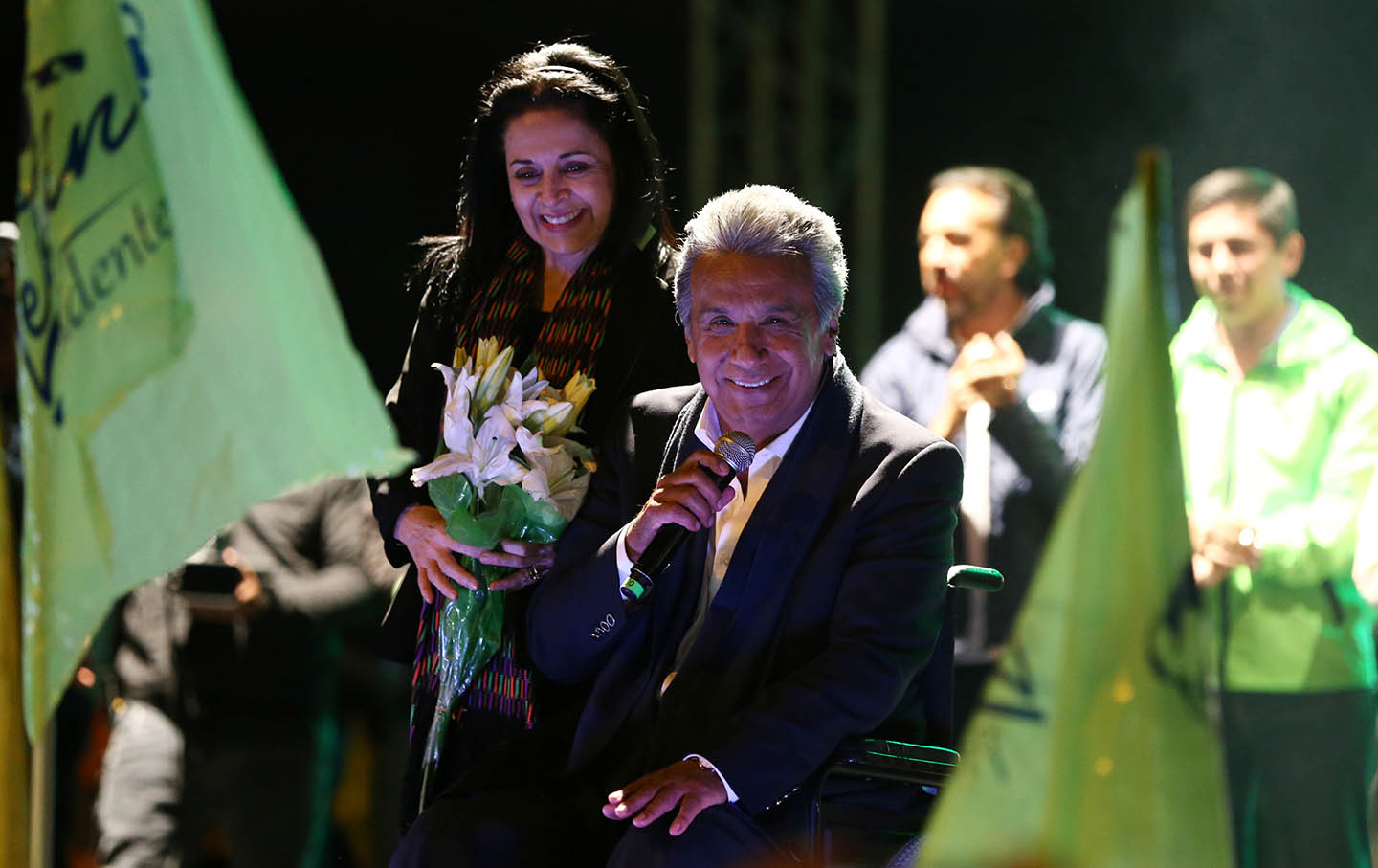 On April 2, Ecuador will hold its runoff presidential ballot, the first major Latin America election since Donald Trump’s unexpected November victory. Polls could be wrong, but so far all of them indicate that Ecuador’s next president will be wheelchair-bound Lenín Moreno, who is promising to continue the progressive agenda of the country’s outgoing leader, Rafael Correa. It’s good news, indicating that the Trump effect might rebound in favor of the Latin American left, halting an emboldened neoliberal right, which now rules in Brazil and Argentina.

There was a moment less than a decade ago, at the crest of the region’s “pink tide,” when Latin America was governed by representatives of each of its historic left-wing traditions: a trade unionist in Brazil, a liberation theologian in Paraguay, a Peronist in Argentina, a Keynesian economist in Ecuador, a feminist medical doctor in Chile, a (former) urban guerrilla Marxist in Uruguay, an indigenous-rights peasant activist in Bolivia (whose mentor was a Trotskyist miner), a nationalist in Honduras, and a military left populist in Venezuela. Nearly the full left spectrum, especially if we were to be generous and include Cuban Stalinists.

When Barack Obama won the US presidency in 2008, Latin America’s leaders tried to welcome him into the pantheon, imagining his victory as fulfilling the legacy of the US civil-rights movement and completing the picture of the Americas ruled by a heterodox left. The Obama administration, however, demurred, letting Hillary Clinton at State maneuver to isolate Venezuela (including pushing for the privatization of Mexico’s petroleum industry, aimed at weakening Hugo Chávez’s successful, until his death in 2013 at least, repoliticization of oil) and legitimizing coups in Paraguay, Honduras, and, most recently, Brazil.

Mark Weisbrot, in The Nation, recently summed up the many successes of the outgoing Correa administration. Quito weathered the sharp downturn in the price of oil a bit battered but still better than did Caracas, with many of the social gains achieved during the boom intact. If Lenín Moreno wins in April, he will help break the right’s momentum. The region’s next big elections take place in Chile, in November of this year, and Mexico, in July 2018, and anti-Trump leftist outsiders are in the running, so far.

Ecuador is about to elect a president who manages to invoke the promise of both FDR and the Russian Revolution.

And if Moreno does best his conservative rival, as polls are saying he will by more than 10 points, a new type will be added to the progressive pantheon: Moreno, who lost the use of his legs in 1998 when he was shot in the back in a Quito carjacking, is a disability-rights activist. According to PRI:

In 2006, Moreno was elected vice president. At the time it was rare to see people in wheelchairs in public. In rural areas, people with severe handicaps were treated as outcasts and sometimes confined to sheds and chicken coops.

But Moreno has tried to change all that. Wheelchair ramps are springing up across Ecuador. People with severe disabilities now receive $300 monthly stipends from the government. And Moreno helped draw up a law that compels Ecuadorian companies to set aside at least 4 percent of jobs for people with disabilities.

In a recent speech, he pledged that the government would reach out to all disabled people who need help. That, he said, amounts to a revolution.

That revolution includes providing free artificial limbs to poor Ecuadorians. Some are being built in a wing of this state-run hospital in Quito. Government officials say the program is the only one of its kind in Latin America.

The Guardian reported that while Moreno served as Correa’s vice president, Ecuador

has become one of the most progressive nations in Latin America when it comes to providing financial, technical and professional assistance to people with disabilities.

State spending on related fields has increased from $2m a year to $150m (£97m). Tests are carried out on newborns to ensure that care is provided early, and all leading employers in Ecuador must earmark at least 4% of their jobs for disabled people.

There are also programmes to provide braille texts and computers for visually impaired people.

Once again, Latin America leads the way. As US progressives continue to fight over how to interpret the 2016 elections, Ecuadorians show how to create a decidedly anti-neoliberal intersectional coalition (see this report on why the country’s Ecuadorean Federation of LGBTI Organizations is supporting Moreno). And, as anybody with a heart in the United States is gearing up to fight a budget that promises to cut Meals-on-Wheels and medical-research funding, Ecuador is about to elect a president who manages to invoke the promise of both FDR and the Russian Revolution. Moreno was born on March 19, 1953, just 14 days after the death of Joseph Stalin, which might explain why his parents named him Lenín, to honor the original promise of a lost revolution.

Lenín’s second name is—wait for it—Voltaire. Latin America, still waving the ragged red flag of the radical Enlightenment. Similar to Hugo Chávez’s father, Moreno’s dad was a rural public-school teacher, a profession that continues to embody the best of Latin America’s everyday socialism (the 43 Mexican student activists who were disappeared over two years ago were training to be rural teachers), placing the common public good over private plunder.

If Donald Trump is almost the platonic ideal of plunder, Lenín Voltaire Moreno might just become the standard-bearer of a revived public. Where Trump apparently can’t ever express pleasure, apart from that which he takes from domination, Moreno’s whole being practically vibrates Beethoven’s “Ode to Joy.” He credits learning how to laugh with helping him recover from the trauma of losing the use of his legs, and he’s authored a number of books on the therapeutic benefits of fun, including The Theory and Practice of Humor.

“We like to laugh at power,” Lenín writes, “and we use humor to ridicule the pretentious, and the politicians who trick us.” In these dark days, he could be just the Lenin we need.