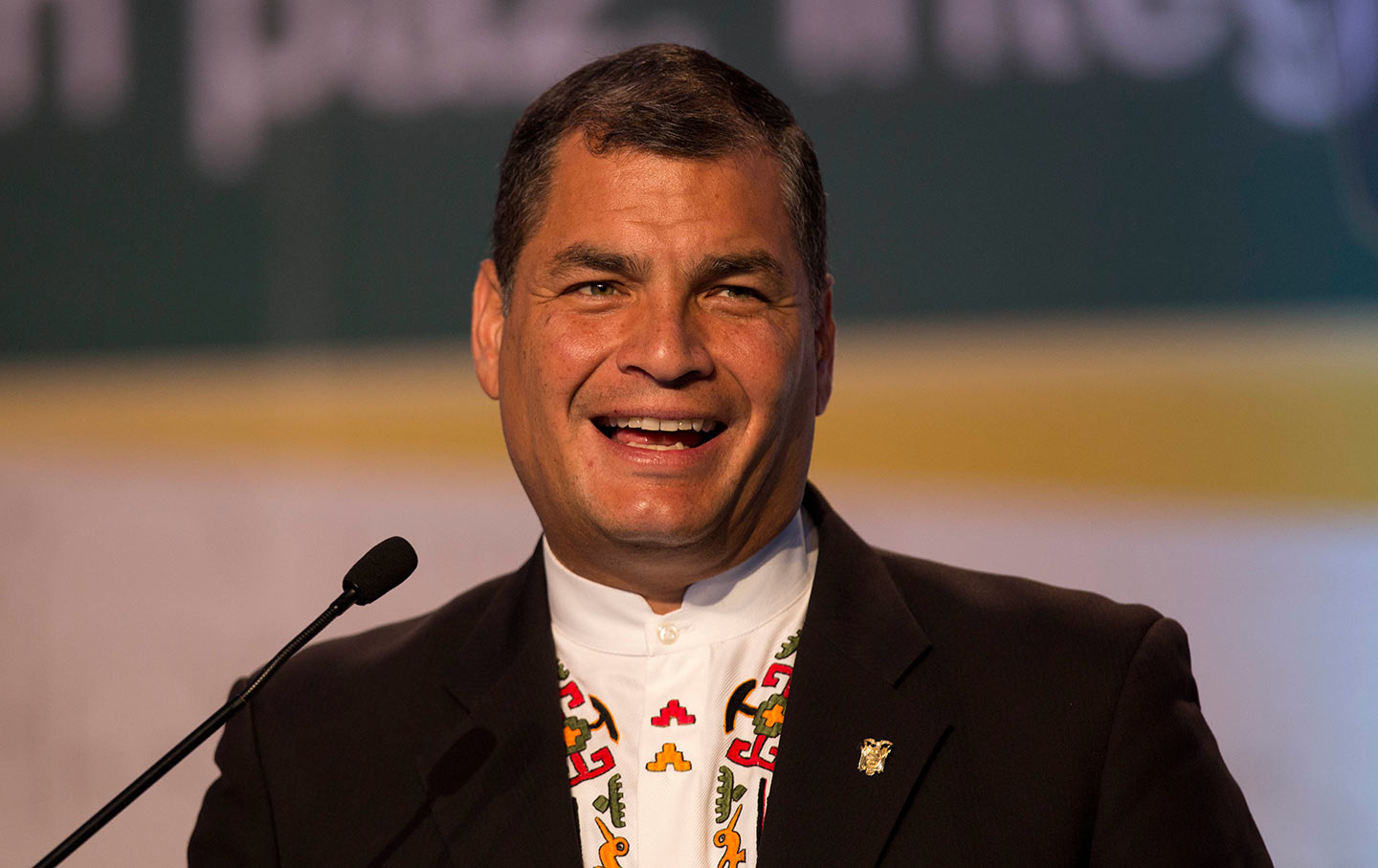 In a shift supported and welcomed in Washington, Latin America has been moving to the right in the last year or so. Three of South America’s largest economies—Brazil, Argentina, and Peru—now have right-wing presidents with close ties to Washington and its foreign policy. The standard “Washington Consensus” narrative, while ignoring any US role in the region, sees the left governments that were elected in South America over the past couple decades as having ridden a commodities boom to populist victories, with handouts to the poor and unsustainable spending. When that boom collapsed, the story goes, so did the finances of left governments and therefore their political fortunes.1

But this is a highly exaggerated and self-serving narrative. Ecuador is a good example of how a left government achieved success over the past decade through positive and creative changes in economic policy, as well as financial, institutional, and regulatory reform.2

The details are also worth looking at because Ecuador’s experience shows that much of the rhetoric about how “globalization” restricts the choices of governments to those that please international investors is also exaggerated. It turns out that even a relatively small, middle-income developing country can adopt workable alternative policy options—if people can elect a government that is independent and responsible enough to use them.3

Ecuador has cut poverty by 38 percent, increased spending on education and healthcare, and raised per capita income.

The results for the decade of left government in Ecuador (2007-16) include a 38 percent reduction in poverty and a 47 percent reduction in extreme poverty. Social spending as a percentage of GDP doubled, including large increases in spending on education and healthcare. Educational enrollment increased sharply for ages 17 and under, and spending on higher education as a percent of GDP became the highest in Latin America. Average annual growth of income per capita was much higher than in the prior 26 years (1.5 versus 0.6 percent), and inequality was considerably reduced.4

Public investment as a percent of GDP more than doubled, and the results were widely appreciated in new roads, hospitals, schools, and access to electricity.5

Rafael Correa was elected president of Ecuador in 2006 and took office in January of 2007. A former economy minister who was trained in the United States, he set out to fix some of the structural and institutional problems that had kept Ecuador from advancing. Policy was handicapped by the fact that Ecuador had adopted the US dollar as its currency in 2000. This meant that the government couldn’t influence its exchange rate and was limited in how much it could use monetary policy. And it reduced the Central Bank’s ability to act as a lender of last resort to the banking system.6

This meant that the government had to be more efficient and creative, and exert more control over the financial system. In 2008, a new constitution was approved in a referendum, and the central bank—which was previously “independent” and mandated to focus on low inflation—was now made part of the government’s economic team. This was very important in coordinating economic policy. The conventional wisdom among most economists—and a pillar of neoliberalism—is that central banks should be independent of elected officials. In practice, this usually means that they are unaccountable to the public, but not so independent of powerful financial interests.7

A new law in 2009 required that banks in Ecuador bring 45 percent of their liquid assets back into the country; this requirement increased to 60 percent in 2012, and the actual level was more than 80 percent by 2015. These and other reforms that kept dollars in the country were essential to overcoming the new government’s first serious challenge: the world financial crisis of 2008 and world recession of 2009. Ecuador was one of the hardest-hit countries in the hemisphere, since oil prices collapsed and the government depended on oil for the majority of its revenue. Another major source of dollars, remittances—mostly money sent home by Ecuadorians working abroad—also collapsed during the recession. This double shock could have caused a prolonged recession or depression, but it didn’t, thanks to large increases in government spending and a large stimulus in 2009. The recession lasted just three quarters, costing about 1.3 percent of GDP.8

The next big economic shock was the much more prolonged collapse in oil prices that began in the third quarter of 2014. This time, the government was even more creative: In addition to some expansionary fiscal policy (i.e., running bigger budget deficits), the central bank actually engaged in quantitative easing, much as the US Federal Reserve did in response to the recession. Ecuador’s central bank created billions of dollars that it lent to the government for spending (and also to state-owned banks). This was unexpected for a government that did not even have its own currency, but it proved to be very helpful in the recovery.9

The most important decision in bringing about Ecuador’s current economic recovery was also perhaps the most unorthodox: The government imposed a variety of tariffs on imports under the World Trade Organization’s provision for emergency balance-of-payments safeguards. This reduction of imports in 2015-16 added about 7.6 percentage points to GDP during those years. This counteracted spending cuts that the government had to make as revenues crashed.10

The government’s legacy will be tested in an election this Sunday for president and national assembly.

The government of Correa and his party (Alianza PAIS) was thus able to achieve considerable economic and social progress, despite two recessions caused by serious external shocks. Contrary to the Washington narrative, this depended on major institutional reforms, financial regulation, and smart policy choices, many of which went against the conventional neoliberal wisdom.11

Of course it helped that the president himself has a PhD in economics and knew what he was doing, and that he had a serious commitment to progressive governance from the beginning. Still, Correa’s government had to fight powerful entrenched interests, including the bankers who owned most of the television media when he took office. A referendum in 2011 prohibited banks from owning media (and vice versa), and that helped to reduce their stranglehold on public debate. But the media have remained a powerful and politicized right-wing force, as in other countries with left governments—e.g. Brazil, where the major media led a successful effort last year to remove Workers’ Party President Dilma Rousseff from office—despite the lack of any impeachable offense.12

The government’s legacy will be tested in an election this Sunday for president and national assembly. The candidate of Correa’s party is Lenín Moreno, who is well known for his national and international activism for disability rights (he himself has been in a wheelchair since he was shot in a robbery in 1998). Moreno, who is popular with his party and the public and promises to expand upon the economic and social gains of the past decade, is leading in the polls.13

Moreno’s closest opponent is Guillermo Lasso—not surprisingly, a big banker—who promises tax cuts, including the elimination of capital gains taxes, that will benefit mainly upper-income groups. Lasso lost to Correa in 2013 by a landslide. Next in line is right-wing former Congresswoman Cynthia Viteri, who wants to dismantle some of Correa’s main reforms, including restoring the autonomy of the Central Bank, removing taxes on capital flight, reducing the power of the central government. Moreno needs 40 percent of the vote, plus at least a 10-point lead on the next runner-up, in order to win in the first round. Many pre-election polls in Ecuador are unreliable, but Moreno is generally seen as leading, if not necessarily by enough to win in the first round.14

Why does this election matter? As Noam Chomsky pointed out last month: “During this century, Latin America, for the first time in 500 years, has freed itself from Western imperialism. Last century, that’s the United States.” The “pink tide” is also a rare event in world history: citizens in developing countries winning economic and social progress through democratic elections (very few of the development success stories of the 20th century or even more recently, e.g. China, have been electoral democracies). From 2002 to 2014, the poverty rate for Latin America dropped from 43.9 to 28.2 percent, after rising over the previous two decades.15

All of these gains—national sovereignty, social progress, democracy—are proving tough to hang on to as progressive forces in the region face a slowing world and regional economy; a resurgent right that still controls most of their countries’ wealth, income, and media; and in some cases their own economic mistakes. And if all that weren’t enough, there is Washington, which for the past 16 years has had a simple strategy: Get rid of all the left governments that we can get rid of, and make sure they never come back. (See e.g., here, here, here, here, and here.) Nobody is expecting anything better from the new US regime.16

It may not get a lot of media attention here, but supporters and opponents of Latin America’s moves toward independence and progressive government in the 21st century will be following this election.17