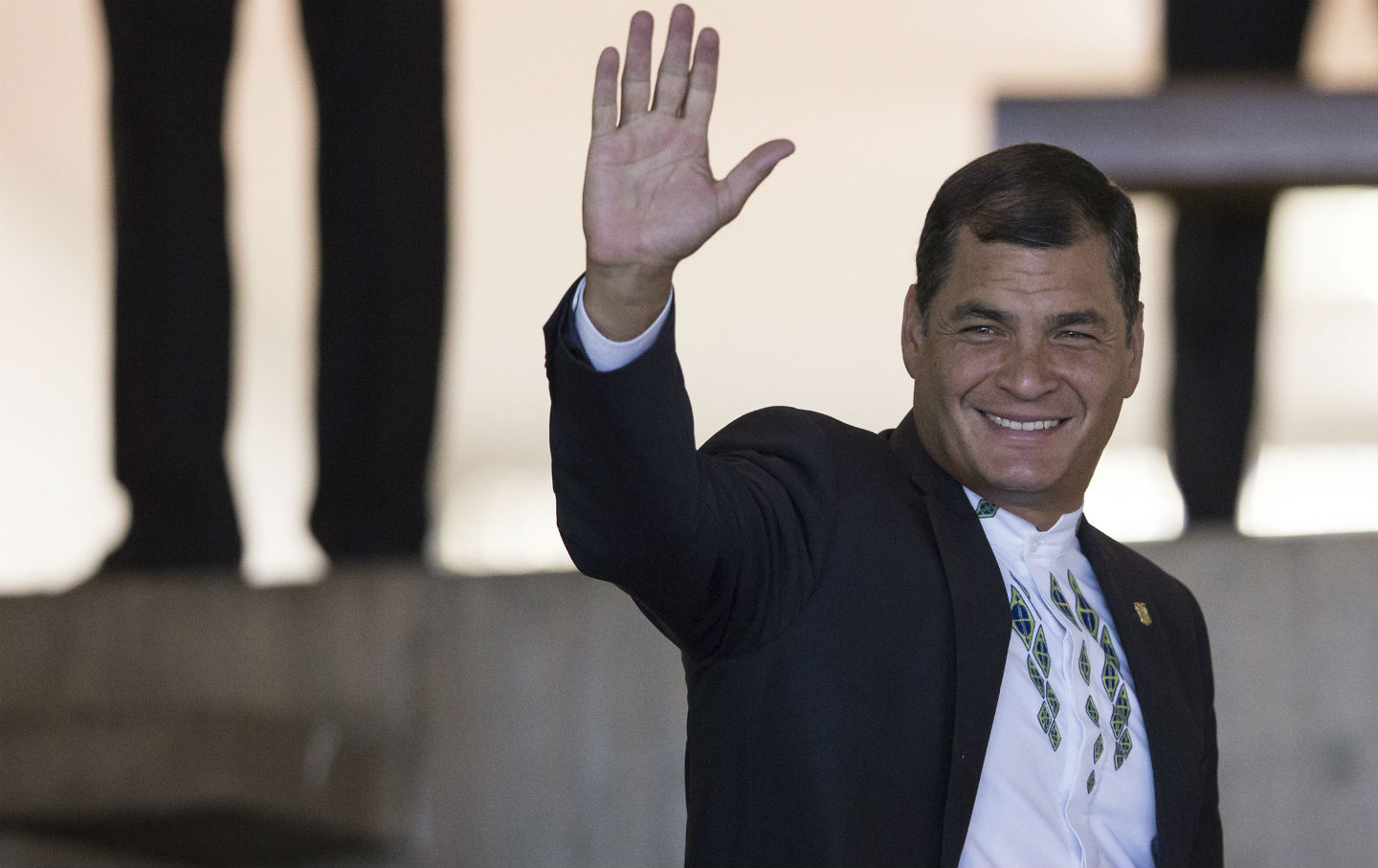 Rafael Correa is often wrongly paired with Hugo Chávez, the late Venezuelan president, as an outspoken Latin American populist. In fact, the differences between the two men are significant. Chávez was a career army colonel; Correa is an accomplished economics professor, with a PhD from the University of Illinois. Chávez first won attention with a failed coup attempt in 1992; Correa stepped into Ecuador’s spotlight in 2005 as a bold finance minister who stood up to international banks. Even Chávez’s partisans admit that his presidency was marred by economic mismanagement; even Correa’s opponents can find little to criticize about Ecuador’s stable and growing economy. These differences partly explain why Chávez’s successor, Nicolás Maduro, is stumbling badly in Venezuela, while Correa continues to enjoy nationwide approval ratings of more than 60 percent.

Correa, 52, was raised in modest circumstances in the tropical port city of Guayaquil. Strongly influenced by the Catholic Church’s Liberation Theology, Correa interrupted his studies to volunteer for a year in a poor indigenous community in the Andean highlands, where he taught school and promoted micro-enterprises. In our recent interview in Quito, he told me simply, “I think all Christians should do this.” There he learned how to speak some Kichwa, the language of as many as 35 percent of Ecuadoreans, who include many of the poorest.

Correa was a charismatic student leader, and the traditional politicians tried to recruit him. “I realized that I wasn’t ready,” he told me. “I needed to learn something first.” An aptitude test in high school had suggested that he study economics. “I was good at both social sciences and mathematics,” he said, laughing. “I didn’t know what economics was. But I decided to try it.”

After attending universities in Belgium and then the United States, he returned to teach in Ecuador, a nation then shaken by chronic economic and political crisis. The country had seven different presidents in only ten years. Correa had been quietly advising one of them when he was picked to be finance minister. He ran for president himself in 2006, and he has been re-elected comfortably twice since then. “I got here by chance, by accident,” he said, gesturing around his office in the 200-year-old presidential palace.

Correa’s Alianza PAIS party enjoys a comfortable majority in Parliament, and its so-called Citizens’ Revolution has notched up one success after another. Oil is Ecuador’s top export; the Correa government renegotiated contracts with foreign oil companies, and used the increased earnings to start transforming education and health. The government is reducing tax evasion among the rich, which is a pervasive problem throughout Latin America. Correa played hardball with foreign creditors, and forced significant reductions in Ecuador’s onerous debts.

Perhaps Correa’s greatest dilemma is how to protect Ecuador’s environment while earning the foreign exchange to pay for Citizens’ Revolution reforms. In 2007, he launched the innovative Yasuni Initiative, proposing to leave $7 billion worth of rainforest oil in the ground in return for international contributions of half the revenue Ecuador would have earned by exporting it. After six years, the initiative barely registered in the United States; only small contributions dribbled in from other parts of the rich world and he had to abandon it.

In our interview, Correa said the failure of the Yasuni Initiative had made his dilemma even more acute. He says he faces two choices: either export Ecuador’s natural resources, or instead try to turn the country into an Asian-type manufacturing sweatshop to earn the needed foreign exchange. “We have poverty; we have misery,” he said. “We must defeat poverty. Our natural resources give us an opportunity to develop without the extremely painful process of exploiting our own workforce.”

So Ecuador turned to China for loans and large investments in mines and oil. The government’s decision has prompted opposition, particularly in areas that will be affected by the mining and drilling. An indigenous leader, José Isidro Tendetza Antún, was murdered late last year, and his community suspects his opposition to a new Chinese-backed gold and copper mining company is the reason for his death.

Rafael Correa’s greatest shortcoming is that he can react angrily to critics. He is too thin-skinned, a flaw that even some of his most enthusiastic supporters recognize. He has pursued opposition newspapers in ways that may be technically legal in Ecuador but are doubtful and unwise. Human Rights Watch has criticized “criminal defamation prosecutions and administrative sanctions against critical journalists and media outlets.”

Correa’s prickly defensiveness is partly why Ecuador’s success is not better known in the outside world. Even after eight years in office, he is still one of the most popular leaders in the Western Hemisphere, and quite possibly anywhere else.