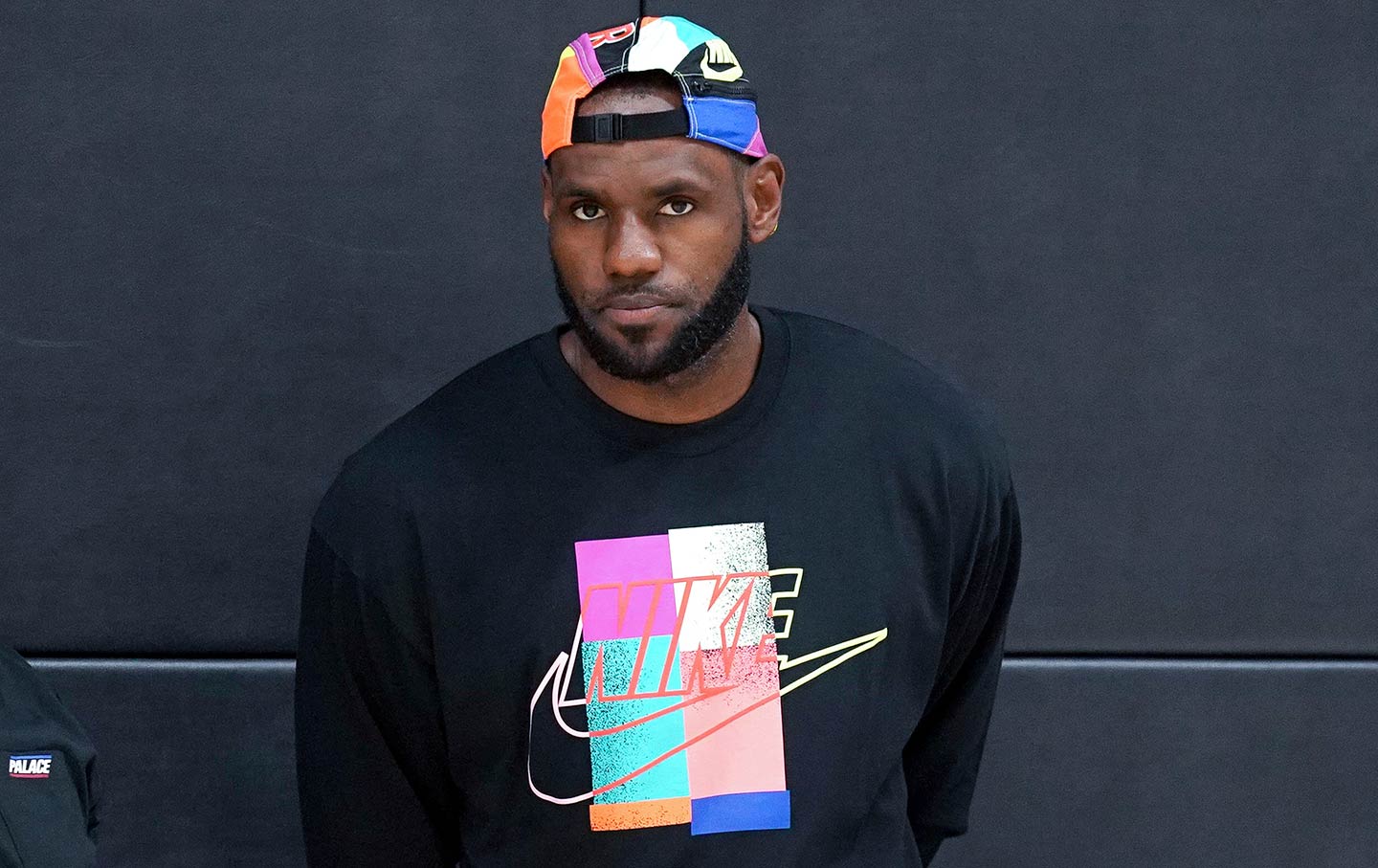 LeBron James watches from the back of the gym during a press conference on May 20 in El Segundo, California. (Scott Varley / The Orange County Register via AP)

LeBron James’s commitment to using his platform for the greater good is damn near beyond reproach. From the time in 2012 when he helped organize his Miami Heat teammates to pose with hoodies after the racist killing of teenager Trayvon Martin, to his wearing an “I Can’t Breathe” T-shirt during warmups to protest the police killing of Eric Garner, he has leveraged his mighty cultural capital to be more than an athlete.

LeBron has also challenged everyone from Donald Trump to the hacks on Fox News for their racism and venality. He has put his money where his politics are, even starting an educational institute for at-risk youth, the I Promise public school in his hometown of Akron, Ohio. His film production company has produced documentaries that show the importance of athlete activism, from his basketball series Shut Up and Dribble to his tremendous Muhammad Ali doc, What’s My Name?

This is why it wasn’t a surprise when he announced last week that he would be taking on the issue of hunger in the United States. Twelve percent of all households in this richest country in the world suffer from what is euphemistically referred to as “food insecurity.” To try and effect this change, LeBron announced that he would be partnering with Walmart to provide for food-deprived families. He recorded a video with Walmart CEO Doug McMillon to announce that he would be the spokesperson for Walmart’s Fight Hunger/Spark Change campaign. The program will use proceeds from certain sales to raise funds for the hunger nonprofit Feeding America.

“It’s an honor and a privilege for me in my community and what I’m doing here to partner with such a heavy hitter in Walmart,” James says. He later adds, “One out of eight Americans struggle with hunger. And I think one is too many.”

Yet this decision to partner with Walmart also rankled those who believe that Walmart—the largest employer in the United States—is actually part of the problem. I spoke to Cyndi Murray, who has worked at Walmart for 15 years in Laurel, Maryland, and is a leader of United for Respect a nonprofit that agitates around issues of economic justice. She said, “If Walmart wants to get serious about hunger, they should pay a living wage. Hard stop. Walmart is the largest corporate employer in the US, but over half of the associates are food insecure. Many celebrities partner with America’s largest retailer, but LeBron ain’t going to fix Walmart’s image problem. Paying us a living wage would be a good start.”

I also spoke with Michael Blain, co-director of the film Dear Walmart, a scathing look at the corporation’s labor practices. He said that if he could speak directly to LeBron, he would say the following: “When children go hungry in the United States, it is almost invariably because their parents are not being paid enough to cover housing, food, utilities, and more. In many states, Walmart workers and their families are the leading recipients of public assistance, including food stamps, because Walmart simply does not pay them enough. LeBron, your partnership with Walmart on this issue would be far more effective, and directly help more children, if you also called on Walmart to pay all its hourly employees a living wage, so they don’t have to depend on food banks and nonprofits like Feeding America for food assistance in the first place.”

There is a racial-justice element to this as well. Roberto Jesus Clack, associate director of the group Warehouse Workers for Justice, spelled this out to me when he said: “Hundreds of black workers, many of whom are heads of households with children, were recently denied employment because of criminal background checks after Walmart ‘in-sourced’ its workforce at their largest warehouse in the country in Elwood, Illinois. Walmart not only let down black workers, they contributed to a phenomenon that keeps black workers and their families in poverty. As an athlete who has supported Black Lives Matter and has contributed to the discussion around criminalization of the black community, we hope he will support our call for Walmart to hire back these workers.”

LeBron is a heroic athlete-activist. But partnering with a company that is responsible for so much hardship is less about doing good that it is about commodifying someone’s philanthropic brand. LeBron could do a great deal of good by not just lending his image to Walmart but also by supporting the workers’ call for economic and racial justice. It would strike a blow against hunger in American homes if the largest employer in this country embraced the most effective anti-poverty program: a living wage.

There invariably will be those reading this who will say that people like Cyndi Murray are asking too much of LeBron—that he’s “just a basketball player.” But LeBron himself has broken out of that box and insisted on being seen as “more than an athlete.” He wants this power and he wants this weight. With that weight will invariably come criticism, especially when choosing to swim with sharks like Walmart. Here’s hoping LeBron hears these voices and acts accordingly.