Imelda Marcos is at her stately home in Manila in 2014, reminiscing on the friendships she made as the first lady of the Philippines. Richard Nixon was “very nice and very human” and had been “misunderstood.” Mao Zedong once kissed her on the hand and thanked her for sparking the end of the Cold War. If Saddam Hussein was experiencing trouble, she would ask him, “What’s your problem?” “I miss the clout of being first lady,” she says. It just so happens that American documentary filmmaker Lauren Greenfield has caught the 85-year-old widow on the cusp of a major political comeback. Greenfield just doesn’t know it yet.

Greenfield first wanted to make a film about Marcos after reading a Bloomberg article by journalist William Mellor on Calauit Island, the “world’s strangest safari park.” The improbable wildlife park came into being in 1976, when then-President Ferdinand Marcos and Imelda Marcos decided to transform the island into a safari zone. For the project, 254 indigenous families were evicted from their homes, and 104 animals were shipped from Kenya to roam the island. The story is a natural fit for Greenfield, a veteran chronicler of extreme wealth known for The Queen of Versailles (2012), her documentary on socialite Jackie Siegel’s mission to build the largest family house in the United States. The parallels between the premises of The Queen of Versailles and The Kingmaker are clear: two former pageant queens who have married into wealth and power, spearheading real estate projects that encapsulate the rapacious appetites of the 1 percent. Marcos herself has been the subject of intimate portraiture before, notably in Romana S. Diaz’s seminal documentary Imelda (2003), an intricate personality study of the former first lady’s mythmaking expanded on here.

But Greenfield discovers that the park pales against the larger story of the Marcos political dynasty’s reemergence. Greenfield has said in interviews that when she began shooting the project, she thought Imelda Marcos might offer a redemptive apology of sorts and somberly reflect on her and her husband’s reputation for state plunder, ironfisted rule, and unfettered excess. (It has been estimated that the couple stole $5 billion to $10 billion from the state.) Greenfield quickly found she was wrong. Imelda Marcos speaks of their ruling days with effusive sentimentalism. The years when Ferdinand Marcos imposed martial law, she claims, were the nation’s best, full of “justice and human rights.” Were she and her husband extravagant? Yes, but this ancien régime grandiosity enriched the spirits of the nation rather than detracted from it. Her glamour was a moral imperative: Her beauty, safari island projects, and yes, her 2,400-something shoes, marked national glory. In them, Imelda Marcos’s worldview stipulates, people could commune in the resplendency of the nation. Call it a trickle-down theory of affect and identification. 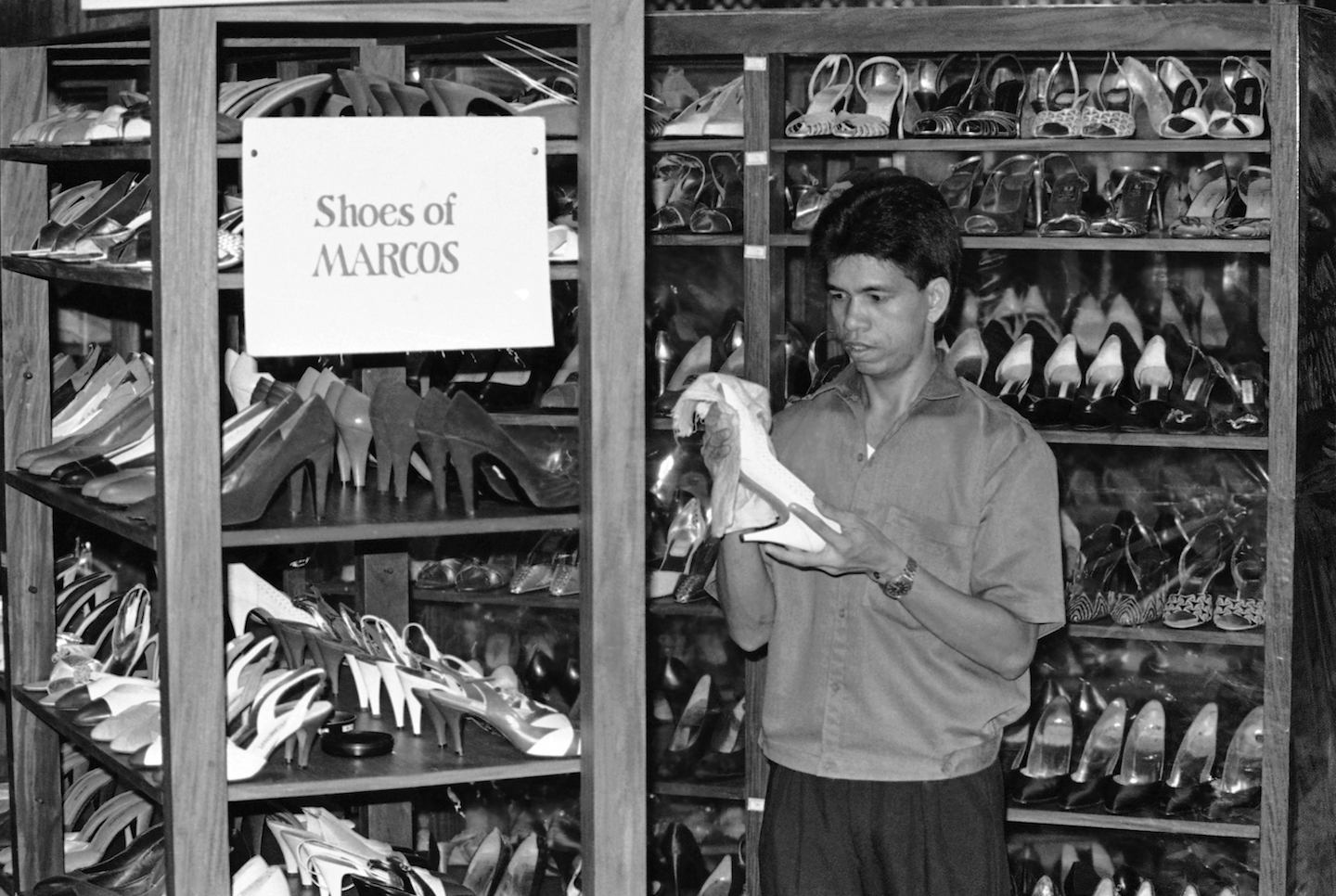 One of the 2,400 pairs of shoes belonging to Imelda Marcos in the Malacana Palace museum of Manila, 1988. (Photo by Joseph Capellan / AP)

In 2014, however, when Imelda Marcos and the documentarian first meet, there is not too much time to reminisce. Marcos is building her family’s future. Since 2010, she has been a congresswoman in the northern region of Ilocos Norte, Ferdinand Marcos’s birthplace. Her son, Bongbong Marcos, is a senator and is preparing to run for vice president in the 2016 elections. She hopes he will someday get the top job. The cards seem stacked against them. At the time, the government is led by Benigno Aquino III of the Liberal Party, the son of Corazon and Benigno Aquino Jr., heroes of the People Power Revolution that unseated Ferdinand Marcos in 1986. These developments move Greenfield to expand her scope beyond the focused portraiture of The Queen of Versailles. After establishing the Marcoses’ past and present mythmaking, the film presents a short modern history of the Philippines’ politics from its rule under the Marcoses to its current governance under Rodrigo Duterte, an ally of the Marcos family. Dissenting voices are included, with testimonies from former president Beningo Aquino III; the Liberal Party’s Vice President Leni Robredo, who beat Bongbong Marcos in 2016; and activists who recount their experiences, including torture, under Marcos-era martial law.

The Kingmaker seems pitched to a general American audience, so this history unfolds slowly, with viewers guided through by talking heads. Those more familiar with the Philippines may not be susceptible to the emotional drops Greenfield’s film wants to inflict. The brutalities that followed Ferdinand Marcos’s imposition of martial law are presented as an unveiling of sorts, a corrective to the quixotic, somewhat charming story of runaway wealth in the film’s first half. Toward the end, The Kingmaker plays up the parallels between the modern-day Philippines and the United States. There’s the sudden ascendance of a strongman who courts establishment outrage. “It’s like Trump,” a local newscaster says in reaction to Duterte’s victory. “No one saw Trump coming.” This is helped, the film suggests, by a “post-truth” landscape complete with shadowy misinformation campaigns on Facebook. Then there’s the growth of dynastic cycles for whom politics is big business. The subtext becomes glaringly obvious when a friendly pastor welcomes Imelda Marcos and her supporters in a local church, expressing hope that the Philippines may one day become “a great nation again.”

The Kingmaker is hyperaware of its timeliness, delivering a compelling case study of the rise of post-liberal politics sweeping the world. It also speaks to the limitations of the language often used to combat it. In The Kingmaker’s marketing and reception, two lines have been foregrounded. First, there’s Imelda Marcos telling the camera, “The perception is real. The truth is not”—a moment often identified in reviews. Then there’s Beningo Aquino III quoting George Santayana’s aphorism that those who cannot remember the past are doomed to repeat it. (Greenfield has highlighted this quote as “ the moral of the story” for The Kingmaker.) These quotes, or the furor around them, encapsulate a common liberal approach to resisting illiberalism: one that fights back by aiming to reinstall truth and reason, which understands society to be composed of enlightened individual agents acting rationally and in good faith on uncorrupted information. Knowing history and, by extension, knowing things are held up as bulwarks against tyranny.

But some of the best moments of The Kingmaker show glimpses of Imelda Marcos’s worldview, one that pays no heed to notions of truth, reason, and rationality. She lives in a world of intuition and personality, where beauty and charisma are major organizing forces of political leadership. She speaks of governance in the language of motherhood, of “giving birth” to the splendor of the nation by loving and being loved. She takes common criticisms and uses them to build her brand. At her birthday celebration, she offers revelers cupcakes with icing depicting shoes. And such behavior evidently gets her what she wants. Notoriety, it turns out, is an incredibly useful political tool. There are two approaches one could take to what The Daily Beast called a portrait of “ the female Donald Trump”: The first is to stew in shared outrage, freezing us into reactive repugnance at such devil-may-care spectacle. The second is to learn. For all the fanfare around Marcos’s dismissal of the so-called truth, she delivers the line glibly. To her, it is an unimportant aside. What might it involve to challenge one’s adversaries on their terrain, without endorsing what they believe?

In the end, I’m haunted by another line in the film. When she goes to Manila’s slums, Marcos says, she takes care to dress particularly nicely. The poor, she claims, respond particularly well to dazzling displays of beauty; they want to see a “star in the dark of the night.” In this pithy statement, she encapsulates a vision that fact-checkers, technocrats, and end-of-history liberals with a passion for norms have failed to confront. Politics, at its worst, is a game of baiting people’s vulnerabilities, best played by those who confuse their rank contempt for humanity with a mandate to save it. I wish it weren’t, and perhaps it doesn’t have to be. But only if we recognize that can we change it. Maybe compelling people to know things isn’t enough. A new world is emerging that reason alone cannot contain; we might need a new language.