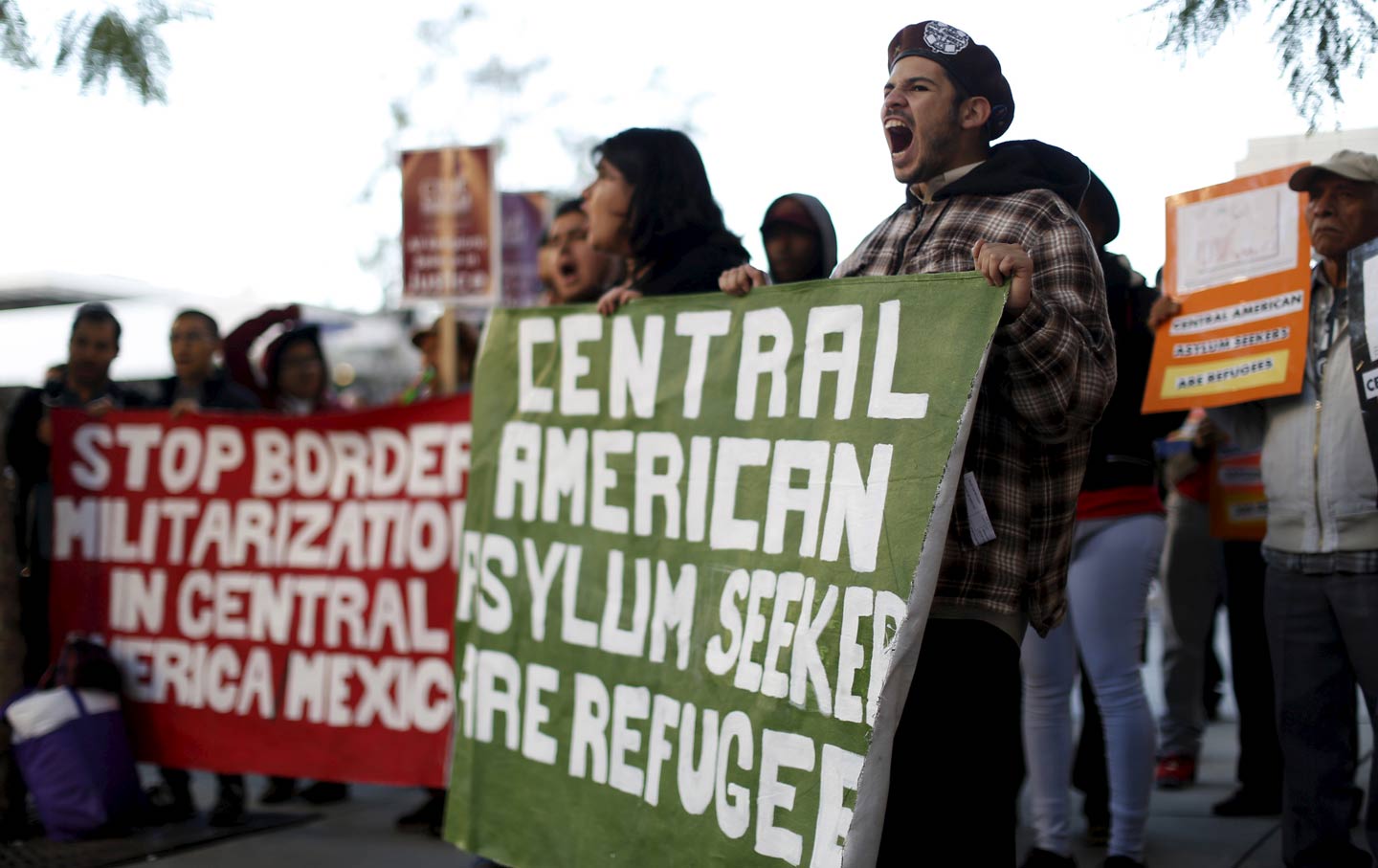 After missing weeks of school, Wildin Acosta wishes he didn’t have such a good excuse for not doing his homework: Homeland Security won’t let him. The 19-year-old high school senior, who migrated from Honduras in 2014, is well known at Riverside High in Durham, North Carolina, as an exemplary student, peer mentor, and aspiring engineer. But en route to his diploma, he got swept up in the latest crackdown on Central American refugee families.

Wildin’s teachers won’t let the border interrupt his schooling, though. So a delegation of Durham educators recently rallied to deliver his homework assignments to his detention center in Georgia. Though the delivery was blocked, evidently because they did not follow formal detainee mail protocols, the protesting teachers showed the authorities that their top student was still expected to walk with his class this June.

His mother, Dilsia Acosta, recalled watching in terror as plainclothes ICE officers stopped her son before he left the house for school on the morning of January 28 and took him away. Wildin’s family fears that if he is sent back to Honduras, local gangs will conscript or kill him.

“The gangs in Honduras, they have no limits,” Dilsia said through a translator. “They will go anywhere…they go into educational institutions, they go into any kind of building…. If they are preying on someone, then they will go after them and they will get them no matter what.”

In the United States, meanwhile, the family struggles against the ruthless pursuit by immigration authorities. Since January, Immigration and Customs Enforcement has launched a series of raids to round up the Central American asylum seekers whose initial claims had been rejected. So far, six Central American youths, aged 18 and 19, have been rounded up and placed in detention in Georgia, isolated from their families and from legal aid. According to a statement issued to The Nation by ICE, in accordance with Homeland Security’s latest “enforcement priorities” targeting recent migrants, Wildin “falls within an ICE priority category due to a final order of removal issued by an immigration judge” last March. The local advocacy group Alerta Migratoria contends that the youths’ legal cases have likely been botched by lack of adequate legal counsel, and complicated by the fact that they have aged into adulthood and are now subject to detention and deportation as adults, not “unaccompanied minors.” Activists are now trying to help them petition for “prosecutorial discretion,” which permits more time to pursue their humanitarian claims.

Alerta Migratoria organizer Elisa Benitez anticipates the courts may be reluctant to grant asylum based on fear of gang violence back home.

Benitez noted North Carolina asylum courts are notoriously tough, with one of the country’s highest deportation rates (some 80 percent of cases result in removal). “Unfortunately, the judges here do not classify gang violence as a reason to [grant] asylum,” she says. “So their options for having some sort of relief are pretty limited.”

Durham teachers are turning Wildin’s crisis into a teachable moment.

The Durham School Board just passed a resolution calling for the release of area youths now in detention, demanding that schools remain free of interference from immigration authorities, and affirming that “school attendance should be encouraged and schools, churches and other sensitive locations must be safe sanctuaries for families.”

The Durham Human Relations Commission has also publicly called for suspension of ICE raids in the community.

Despite displays of solidarity, teachers say schools lack the support and resources they need to help students cope with the terror of immigration enforcement. Many migrants arrive in the country having experienced intense violence or exploitation; conditions may be further aggravated by the hardships of resettlement, including legal and economic marginalization.

Elementary school English teacher John Davis has observed signs of trauma in some students who “have been unable to sleep or have broken down in tears in school about [presidential candidate Donald] Trump’s campaign and the comments that he’s making, and fears their families will be sent back to Honduras, Guatemala, El Salvador, or Mexico.”

“It’s important for teachers to educate themselves on ways that we can affirm students’ identities,” Dominguez says. Through her world literatures curriculum, she says, she tries to tie the narratives in students’ texts to contemporary questions of displacement, conflict, and alienation, enabling them “to write about themselves and read about themselves and learn about their histories.”

Those aspects of migrant struggle have become more real in recent days. Riverside High School, which has one of the highest Latino enrollments in the district, saw attendance drop by some 20 percent following Wildin’s arrest.

A similar pattern was observed after the enactment of Arizona’s infamous SB 1070 law, which encouraged mass racial profiling of Latino immigrants by local police: Many families seem to have left the local public schools, leading to “lost funding and job cuts” and rising unmet needs for social services, according to a 2015 social analysis.

“In North Carolina, there’s a lot of attacks on public schools going on…. I think that some teachers in our school want to do something, but it’s not a good climate for public education here,” Davis says.

Still, the public education community is learning about the power of collective action. Dilsia Acosta advises other families in her predicament not to dwell in silence: “I would tell these parents that they have no reason to be afraid…. Even when these things happen, we come to learn that we have rights in this country.”

On Thursday, Durham teachers delivered another civics lesson to Homeland Security, again seeking to send Wildin his homework in detention. Wildin may not yet have the papers he needs to get free, but in the pages of his math workbook, he’ll find a different kind of liberation.