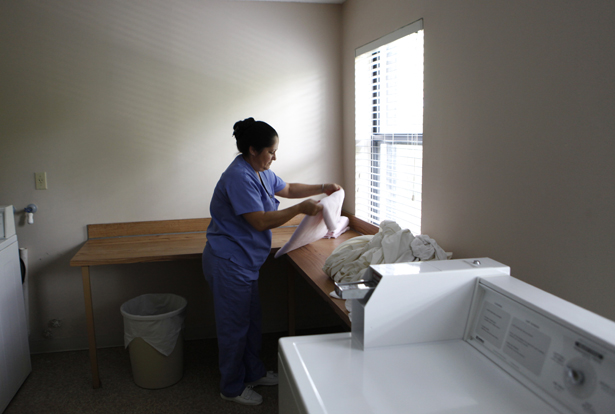 Labor advocates expected 2015 to be the year that some long-overdue respect finally comes to workers who provide home-based care for seniors and people with disabilities. But just as a federal reform granting those workers minimum wage and overtime pay was to be enacted this month, a district court judge has ruled in favor of the industry’s objections to giving home care workers equal rights. With the revisions blocked for now, the new year brings more hardship and uncertainty to a workforce on which hundreds of thousands of vulnerable people depend.

Although twenty-one states and the District of Columbia currently mandate some overtime or minimum wages for home care workers, the rule change would have guaranteed a national baseline for decent labor conditions under the Fair Labor Standards Act (FLSA). But industry groups have long resisted expanding the rights of historically marginalized care workers and last year sued to preserve the current system for roughly 2 million workers, the vast majority of them women, disproportionately poor, immigrants and of color. The regulation, issued by the administration in October 2013 after months of political wrangling, reinterprets a forty-year-old exemption for “companionship workers” that excluded home care workers when lawmakers extended labor protections for domestic workers.

But Judge Richard Leon of the US District Court for Washington, DC, just issued the second of two decisions vacating the rule, siding with the Home Care Association and other business groups by declaring that the Labor Department’s rule was “inconsistent” with the intent of Congress, and that the rule threatened to undermine services. An earlier ruling in December partially vacated the new rules for “third party” employers who provide in-home service to private households. The latest opinion targets the Labor Department’s definition of “companionship” in the FLSA, contending that the Obama administration was “trying to do through regulation what must be done through legislation.” The decision might be challenged in further litigation, so the rule is not dead. But workers and consumers are for now still stuck with a Depression-era labor law that hasn’t caught up to the realities of the industry—a sector that’s supposed to be at the cutting edge of healthcare.

Judge Leon found that the Labor Department overreached by defining “companionship” narrowly. In the Labor Department’s understanding, Congress meant only to exclude casual workers performing “elder sitter” services, as opposed to the skilled, often physically and mentally demanding labor that home care workers typically perform today. The court countered that Congress wrote the exemption with a broader view of companionship services in mind, but were motivated by “concern with the ability of their constituents to pay for in-home care on a regular basis.” Thus, the judge argued, lawmakers understood the value of these workers when contemplating “sitting” services, but still wanted to keep wages low.

That calculus—paying providers of essential medical, bathing and feeding services on the cheap—doesn’t work for people like Emily Uy. The Los Angeles–based, Filipino-born home care aide has for six years tended to the intensive needs of seniors and infirm patients, but remains ineligible for overtime under state law. “This rule means the difference between constantly worrying about my bills and having a little breathing room,” she said in a response to the ruling issued by the advocacy coalition Caring Across Generations. She loves her work, and “We always put our clients first, but this is still a job. At the end of the day I still need to feed my family. We deserve the same job protections as everyone else.”

Uy’s job has changed dramatically since Congress wrote the provision in 1974: home care workers, many of them full-time breadwinners, are not only a more professionalized, trained labor force but are also helping modernize the healthcare infrastructure, toward more community-based (and ultimately more cost-effective) systems. What has not modernized, however, are the poverty wages.

Despite some improvements in labor standards, through both state-level reforms and unionization in certain states, nationwide, the median hourly wage in the sector is below $10. Over a third of home health aides lack health insurance themselves; over half depend on welfare benefits.

Christine Owens, executive director of the National Employment Law Project said in a response to the ruling that vacating the law not only further eroded labor conditions but would undermine the quality of the services, “as high turnover and worker shortages plague an industry that suffers from low pay.” A recent survey of home health aides found that about one third “are very likely or somewhat likely to leave their current job in the next year,” even though the demand for home care services has skyrocketed in recent years with the “gray wave” of aging baby boomers seeking to “age in place,” without nursing homes.

But the Labor Department rule just represents one piece of the home care workers movement today. The industry’s pushback merely underscores the importance of localized efforts to improve working conditions, independent of the federal rulemaking.

Caring Across Generations Co-Director Sarita Gupta tells The Nation that although the ruling is a setback, “The truth is that the [Labor Department] rule was really establishing a floor, not a ceiling in the first place.” Advocates for care consumers and domestic workers still keep pressuring state authorities to recognize that “given the changing demographics of [these] states and the nation as a whole, this workforce is vital to making sure that people can live independently as they age or if they have disabilities.… And in order for the workforce to be healthy and stable, we have to have these be good jobs that pay reasonable wages and have the overtime protections in place.”

Whether the system changes through state or federal reform—and the court battle over the White House rule looks poised to drag on on appeal—grassroots outreach and community education will be needed to marshal appropriate funding and equip families as well as workers with an understanding their rights and responsibilities. “That work will take time,” Gupta says, “to figure out how to support raising the standards for workers while also making sure that we’re increasing access to services.”

So providers and consumers are already, in their own way, answering concerns raised in court about the cost of care, as communities collaborate to set new rules to ensure everyone at home, workers and those they care for, are supported.