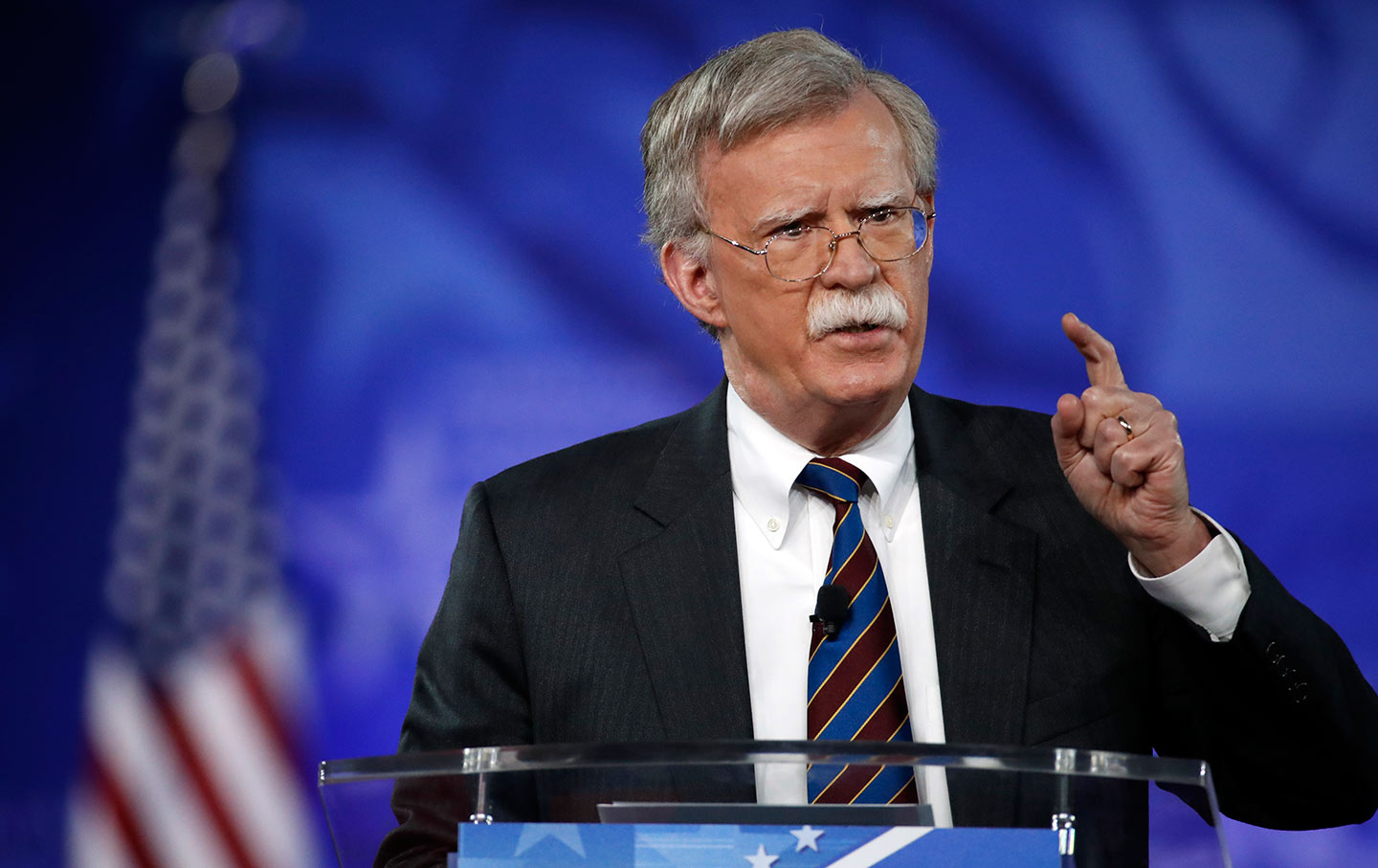 It did not take very long after the appointment of John Bolton as Donald Trump’s national security adviser for the United Nations universe—diplomats, the Secretariat, organization outposts around the world and analysts in numerous countries—to wonder what will happen to Ambassador Nikki Haley. Her brief diplomatic career and ambitions for a larger political future could be in peril. Bolton’s presence and extraordinary power in the dysfunctional White House could derail both.

Haley, a former governor of South Carolina with no international experience, nonetheless has put her considerable political skills to work as a learn-on-the-job negotiator through a rough year on the Security Council, defending and often translating Trump’s impetuous foreign policy demands, tweeted without the backing of expert advice. She is certainly a conservative Republican with a Tea Party past who can be shrill and combative, but she has also cast herself in the role of explaining to the White House what needs to be “fixed” at the UN to serve US interests.

Bolton, with a long history as an America Firster in US foreign affairs, has never wanted to fix the UN. To insiders he has been regarded over many years as contemptuous of diplomacy and international engagement wherever he sees potential challenges to American sovereignty. His aim is destruction not repair: a “house-wrecker,” a former UN official called him, adding that if Haley tried to disagree with or hold her ground against Bolton on any important issue, he can, in his new and very powerful position, simply push her out.

John Feffer, director of Foreign Policy in Focus, lays out in very clear terms why Bolton, who has always been a threat to global institutions, is now even more dangerous than he was in 2005–6, when he was ambassador to the UN. It was a recess appointment made by George W. Bush because Bolton was too toxic to be confirmed by the Senate.

“Trump is a very powerful boat with no rudder” Feffer writes. “Unfortunately, Bolton is now his rudder. Which effectively means, when it comes to foreign policy, that it’s Bolton’s administration now. National security adviser is the perfect position for Bolton. He didn’t have to go through any messy confirmation hearings. He doesn’t have to perform any of the ceremonial tasks of a secretary of state.”

On some issues, Haley she has already walked close to the line in dealing with Trump, some analysts say, and could be an easy target for Bolton. She has said publicly that Russia could be guilty of war crimes in Syria, pulling ahead of Trump in this case. While a relentless critic of the UN Human Rights Council because of its anti-Israel record and its mixed bag of members, she has pulled back from actually walking out. When Bolton was ambassador, he tried to abort or at least greatly diminish the council at its creation in 2006. Failing that, he declared that the United States would not join, a decision reversed by Barack Obama.

Haley had been in her UN job barely a few months when Trump joked at a meeting with the UN Security Council that if they didn’t like Haley, “she could easily be replaced.” In retrospect, that is all the more ominous in the light of what has happened to other cabinet and White House officials the president has jettisoned, often after praising them fulsomely.

Haley is very proud of her membership in the cabinet and on the National Security Council. Her roles there appear obscured now. As secretary of state, Rex Tillerson (who could barely stomach Trump) largely ignored or sidelined her. It is too early to judge what relationship she would have with his successor, Secretary of State Mike Pompeo, who is close to Trump, though considerably more diplomatic, knowledgeable and moderate, to judge from his early public remarks.

Almost exactly a year after Trump’s jesting remark to Security Council members, Haley was blindsided (or set up?) by the White House to announce in a television interview that new a new round of sanctions would be imposed on Russia. Trump knocked that down the next day. Larry Kudlow, the White House chief economic adviser, said that Haley “got ahead of the curve,” and suggested that she might have been confused. Haley, humiliated and furious, said: “I don’t get confused.” Kudlow withdrew the comment, but memories of the exchange linger.

Jeffrey Laurenti, who has written extensively on the politics of American foreign policy as a former fellow at the Century Foundation and executive director of policy studies at the United Nations Association of the United States, recalled in an e-mail that Bolton, working behind the scenes, was widely believed to be instrumental in 1992 in pushing Thomas Pickering, one of the 20th century’s most illustrious diplomats, out of the UN ambassadorship and sending him to India.

Leslie Gelb, then foreign affairs columnist for The New York Times and later president of the Council on Foreign Relations, wrote at the time that “It is widely believed by Washington cognoscenti that Ambassador Pickering is being posted to India for the worst of reasons: Secretary of State James Baker feels that the career diplomat is casting too big a shadow on the Baker parade.”

As for Haley’s future, Laurenti said: “There are already signs that the president was becoming suspicious of her fidelity to the boss’s interests, of which the charge that she was ‘confused’ about an unexpected Trump policy pirouette was the most eyebrow-raising example.”

“For sure, Haley has earned respect, both among diplomats and career officials in UN circles and among the Washington political class, as an effective and media-savvy political operator,” Laurenti said. “She has built a constituency inside the Beltway for her Republican foreign-policy orthodoxy—suspicion of Russia, hostility to Cuba, zeal for Israel, ardor for airstrikes—and her dismissal would dismay many in the party who see her as the best balm for Republicans’ demographic lesions in the post-Trump era.

“But her own ambitions have been a little too obvious in the issues she’s sought to seize as her own,” Laurenti added, “and given the incessant palace intrigues in the Trump White House, she can never feel secure—especially if she has someone as single-minded and relentless as Bolton with the president’s ear every day.”

In 2013, Frederic Eckhard, who had been Secretary General Kofi Annan’s spokesman from 1997 until 2005 (and a UN official in peacekeeping and political missions before that) published a book that covered the Annan years and the impression Bolton had left at the UN. In the book, Kofi Annan: A Spokesperson’s Memoir, Eckhard wrote:

John Bolton was perhaps the only person Kofi genuinely didn’t like. He never told me that, but I just feel it. Kofi got on with Saddam Hussein, Jesse Helms, Muammar Qaddafi. He even liked George W. Bush. “I didn’t like his policies,” he once commented to me, “but I always got on well with both him and his wife.” But Bolton was a house-wrecker at the UN; he almost single-handedly undid the years of work that Kofi had put into the major reform proposals that he put before the 2005 Assembly.”

In that momentous (for the UN) assembly session—led with great skill by its president, Jan Eliasson of Sweden, who later was deputy secretary-general from 2012 to 2016—UN member nations agreed on the doctrine of the “responsibility to protect,” formulated to prevent governments from abusing their own people. It also abolished the discredited UN Commission on Human Rights and replaced it with the current Human Rights Council.

[Kofi] proposed giving the new Council limited membership and real teeth. But human rights in the United Nations is so politicized that Kofi’s proposal became a political football. The General Assembly watered it down considerably and US Ambassador John Bolton entered the fray in a way that just made things worse.

In the George W. Bush years, Bolton, a disbeliever in even the concept of international law, also took aim at the International Criminal Court, a formally independent body designed to deal with the leaders of the world’s most abusive regimes, who could be tried on charges as war crimes, crimes against humanity, and genocide.

“Washington threw obstacles in the way of the march toward the signing of the ICC statute, but it just kept rolling, with Kofi cheering from the sidelines,” Eckhard wrote. “President Clinton had signed the statute [creating the court] as one of his last acts as President, but the Bush Administration, spurred on by John Bolton, who had been made a senior official in the State Department, ‘unsigned’ the treaty in May 2002.”

At the UN now, Bolton’s influence and long held unfinished agenda are already evident. He is credited for a revived US campaign to shut down a 27-year-old peacekeeping mission in the Western Sahara, a region claimed by Morocco, where a local Sahrawi independence movement, the Polisario, has been entrenched for decades, effectively protected by the UN, with troops from several countries including Russia, Bangladesh, Egypt, and Pakistan. The Trump administration has been cultivating stronger ties to Morocco.

On April 27, the US UN mission held a briefing in the Security Council on Washington’s plan to speed up—finally—a resolution demanding that negotiations should end the dispute or that the Sahara operation, known by its UN acronym, MINURSO, should be shut down. The briefer was not Haley, but Amy Tachco, political coordinator at the US mission. Tachco paid tribute to Bolton, who had been involved in a UN Western Sahara mission led by the former secretary of state James Baker in the late 1990s. Later, as ambassador in New York, Bolton tried but failed to get action in the UN.

“John Bolton once wrote, quote, ‘MINURSO seemed well on the way to acquiring a near-perpetual existence because no one could figure out what to do with it,’” Tachco said. “More than a decade later, as we gather once again here in this chamber, Ambassador Bolton’s warning has proven accurate.” The Western Sahara may be a small start, but more of Bolton’s unfinished business is expected to follow.