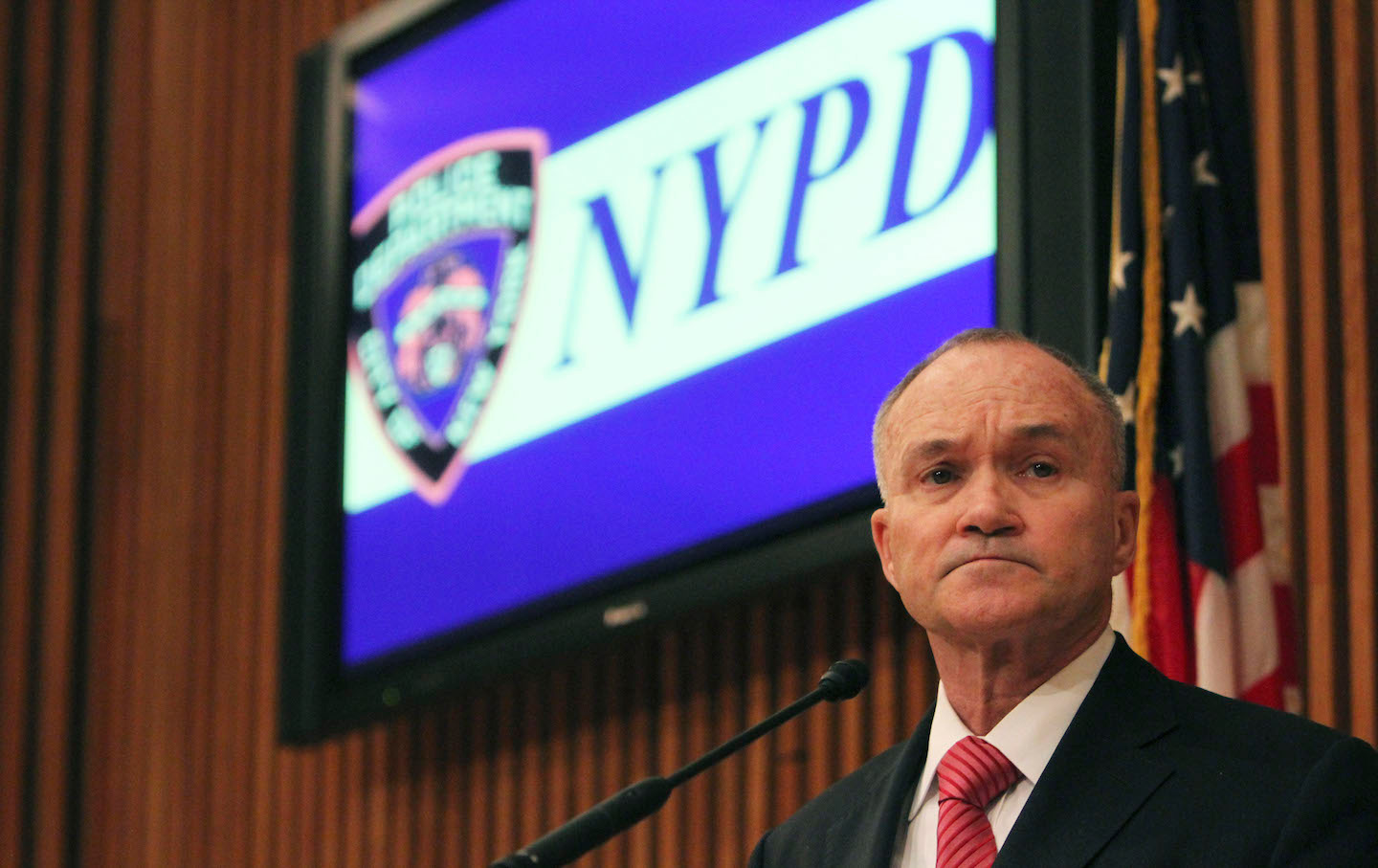 Raymond Kelly announced an increase in police focused on combatting social media–fueled violence at a press conference in 2012. (Photo by Mary Altaffer / AP)

By 2011, Asheem Henry seemed to have put the troubles of his hardscrabble adolescence in Harlem behind him. Three years into probation for illegally possessing a weapon, the 20-year-old had distanced himself from his neighborhood crew, finished high school, and started college in New Jersey.

But when the New York Police Department, in November of that year, cracked down on supposed gang activity in Henry’s neighborhood, he was among the 19 young men charged with conspiracy and other crimes. Prosecutors portrayed the college freshman’s clique, which referred to itself as the Goodfellas, as a criminal organization. And along with Henry’s previous guilty plea, they cited unconventional evidence to back up their claim that he was involved: images of Henry and other crew members posted to social media when he was still a minor—and before the gun charge.

The NYPD has increasingly used such digital dragnets to zero in on Manhattan’s remaining high-crime areas in recent years. Five months after Henry’s arrest, his younger brother Jelani was similarly scooped up by law enforcement. Jelani was charged with two counts of attempted murder in connection with a shooting outside a public-housing development in Harlem, with the cops citing an eyewitness account as well as Jelani’s “likes” of Goodfellas photos on Facebook. A judge denied him bail. The teenager’s social-media use helped earn him a trip to Rikers Island, where he would remain for 19 months.

As Jeffrey Lane writes in his new book The Digital Street, such blurring of the physical and online worlds can be particularly dangerous for many teenagers of color, especially those growing up amid poverty and violence. Legal surveillance of spaces like Facebook and Twitter gives police new power to interpret behavior and—in the case of the Henry brothers—weave narratives that can suggest guilt by digital association. Asheem ended up striking a plea deal for a reduced sentence on his conspiracy charge; Jelani’s case was eventually dismissed because of the lack of a speedy trial.

“Those indicted were accountable to any information from anytime, anywhere, on their social media accounts or the accounts of others,” Lane writes of these online sweeps, which have continued in the years since.

Tech giants have marketed their products as tools to strengthen community ties and elevate underrepresented voices. But as Lane lays out, these platforms also hold the potential to perpetuate the existing social dynamics of urban areas with limited opportunity, high crime, and intrusive policing. “Youth face the same people and problems in the neighborhood as they do online,” he writes. That finding isn’t particularly surprising; the social Web can reinforce existing networks as well as build new ones. But in Harlem and similar areas, it also creates a new virtual space for state control. In introducing readers to what he calls “the digital street,” Lane teases out its potential nuances, raising a host of questions that will only grow in complexity as it continues to intersect with the physical world.

The Digital Street cites previous urban ethnographies as its inspiration, especially Elijah Anderson’s writing on how black teens in neighborhoods defined by structural inequality often derive respect from an informal set of rules: the code of the street. Central Harlem, a historically African-American area flanked by the Columbia University campus, is a prime example of such a community. And Lane extends immersion and other tools of urban ethnography to the online world in order to get a more complete picture of his subjects’ lives, including the impacts of an early era of digital policing.

When Lane moved to Harlem in 2009, he was part of a wave of mostly white newcomers who have quickly turned the area into the latest front of gentrification in Manhattan. Now an assistant professor at Rutgers, Lane spent the better part of three years as an outreach worker for a peace ministry attempting to halt the recurring violence between rival groups of Harlem teens. The Digital Street focuses largely on this period, when Myspace and other now-antiquated platforms still competed with Facebook, YouTube, and Twitter. These corners of the Internet are in many ways analogous to Harlem hangouts, Lane writes, and in some cases have replaced them as teenagers’ go-to gathering spots. Their social-media use ranged from the mundane—posting good grades, chirping at members of the opposite sex, shooting rap videos with friends—to online trash talk between opposing crews. Yet this ease of communication came with a big catch. “The fundamental challenge of digital street life pertains to the boundaries of its visibility,” Lane observes. “The social media environment joins settings separated by the scheduling of everyday life that keeps place-based relationships apart.” In other words, it condenses the public and private parts of our lives into a single profile.

The potential threat, as many social-media users intuitively understand, is context collapse: when identities and messages crafted for one audience become distorted in meaning as they find their way to another. Facebook photos or tweets quoting favorite rap songs can hold vastly different meanings for parents, teachers, and the police, who are able to see them on public forums without always having the background knowledge to understand their intention. That terrain appears particularly perilous as law enforcement replicates its constant physical presence in neighborhoods like Harlem to these online spaces. Lane’s fieldwork follows young people as they developed strategies—a sort of digital code-switching—to navigate these parallel worlds.

Many of the Harlem teenagers that he observed toggled between public-facing pages and private or anonymized burner accounts, sharing work updates and teenage bravado on different platforms. One college student identified as “Sarah” flagged a Facebook video of her fighting another girl for fear of damaging her career prospects, but she allowed a second video of the fight to remain on YouTube—a harder-to-search platform—to bolster her standing among her peers. The goal, Lane writes, was to gain respect from peers without damaging one’s reputation among adults. It’s a traditional dilemma for teenagers everywhere; the level of surveillance on the digital street only raises the stakes.

Pulling off split personalities is tough in any context. In Central Harlem, that difficulty may present some opportunities for parents and other local leaders to intervene before bravado escalates into violence. Lane shadows a minister he refers to as “Pastor,” who embeds himself within teens’ physical and virtual lives in the hope of moderating their discussions and alerting parents to potential problems. Pastor’s efforts produce mixed results: The potentially overriding counterweight comes when outsiders monitor social-media interactions and assert control over their meaning.

Such scrutiny would also likely yield ugly findings in more affluent communities of young people, from suburban high-school cliques to college fraternities. But the state exercises far greater surveillance powers over areas with relatively high poverty and crime, thereby criminalizing some teenage behavior from the start. In this sense, Lane writes, context collapse poses a far greater risk to those in neighborhoods like Harlem.

“Whereas some teens are involved in street violence, most teens are around this activity only because they share neighborhood space with conflict-involved peers,” he continues. “Assuming social media users become ‘hot’ as they discuss neighborhood violence, their communication exposes themselves and their peers to the authorities. This creates a situation in which peers facilitate the criminalization of each other.”

All of this raises new questions about civil liberties in the wake of stop-and-frisk and other, more overtly hard-line police tactics. With violence in New York falling in recent years to once-in-a-generation lows, the NYPD has trained its focus on concentrated areas where suspected gang members and others are thought to commit a disproportionate number of crimes. This strategy, which includes the surveillance of social-media accounts, has led to some large-scale raids. A 2014 indictment targeted more than 100 suspected gang members allegedly fighting a sometimes-deadly turf war between rival public-housing developments not far from the neighborhood that Lane studies in The Digital Street.

But the way that the NYPD and other big-city police departments cultivate so-called “gang databases” of the people targeted in such raids remains willfully opaque. Dermot Shea, the NYPD’s chief of detectives, testified before the City Council Committee on Public Safety last year that there are two ways social media can factor into a person’s inclusion in the database: “posts admitting to membership in a gang”; and “social media posts with known gang members while possessing known gang paraphernalia,” in addition to other evidence such as “frequent presence at a gang location” or “association with known gang members.”

Civil-liberties groups and other advocacy organizations have argued that these criteria unfairly target communities of color, and they also seem to give law enforcement a wide berth for interpreting relationships among young people who socialize in wildly different ways than the average police officer or prosecutor does. Shea downplayed that threat, but the NYPD’s figures for both the total number of people entered into its gang database and the number of teenagers included were at times contradictory across his testimony, a corresponding op-ed in the New York Daily News, and the Freedom of Information Law disclosures published by The Intercept. In the case of the Henry brothers, at least, evidence that included social-media posts was enough to pull Asheem deeper into the criminal-justice system with a conspiracy charge brought years after he pled guilty to a related crime as a minor, and it was also enough to send Jelani to jail without a trial for more than a year and a half, including several months in solitary confinement.

These issues will only become thornier as teenagers spend more of their daily lives online. The major limitation of The Digital Street is that it focuses on digital behavior from 2009 to 2012, which may as well have been eons ago. Encrypted-messaging apps have since proliferated, while young people’s social-media use has veered toward the likes of Snapchat and Instagram, where private communication is a primary feature. The looming question going forward is the extent to which tech companies cooperate with law-enforcement requests for access to information shared on their devices and software. If Silicon Valley’s recent track record on user data is any indication, that may be a digital street we should avoid going down.