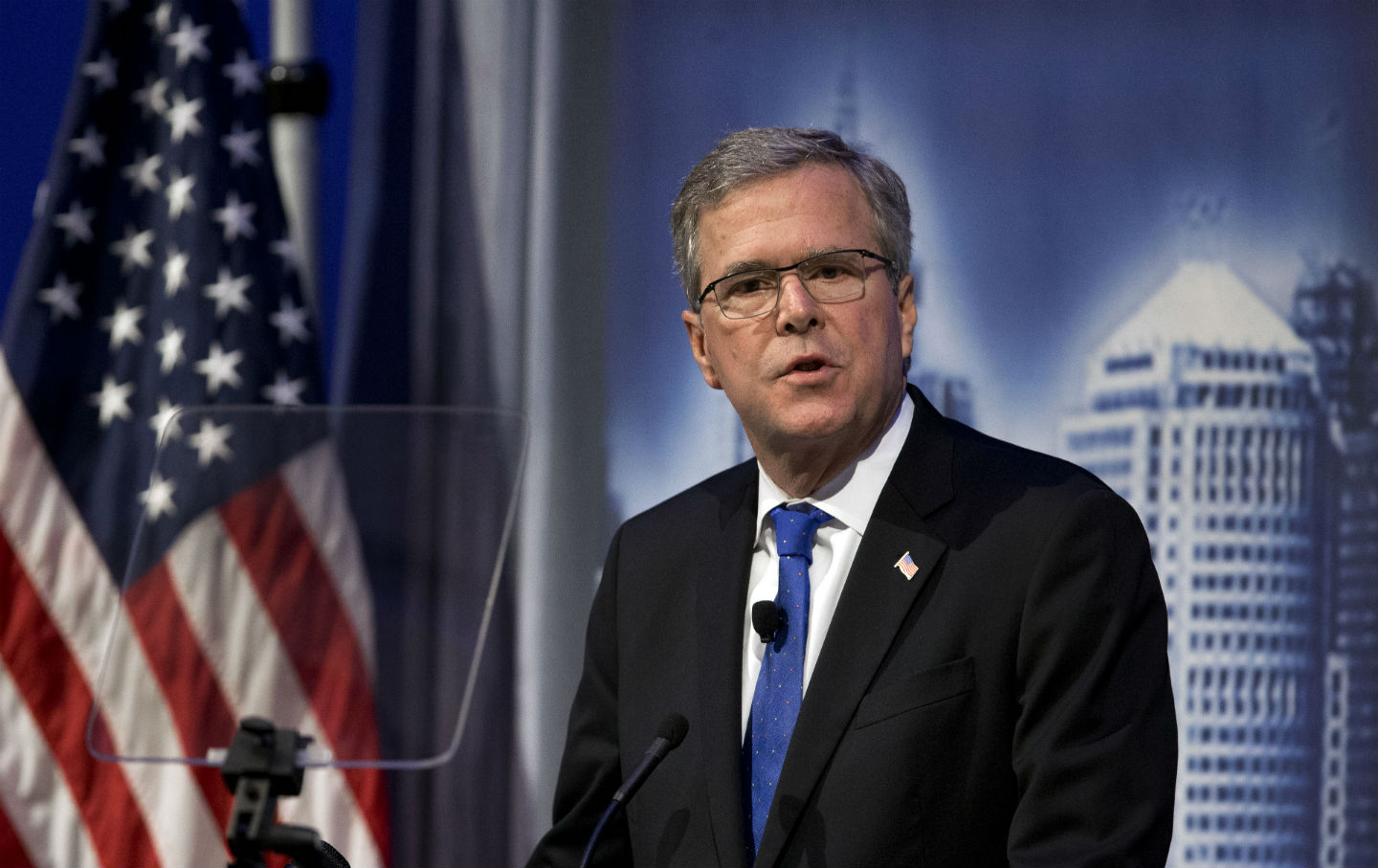 When economic theory makes its way into campaign trail chatter it can take on a life of its own. And Jeb Bush’s gaffe-of-the-week showed how even today, Reaganomics keeps trickling down into the popular conservative parlance.

When asked about the crisis of unemployment, Bush stated, “Workforce participation has to rise from its all-time modern lows. It means that people need to work longer hours and through their productivity gain more income for their families.”

The economy should aim for 4 percent annual growth to sustain more jobs, he argued, so “we have to be a lot more productive.”

The comment was instantly assailed as both “out of touch” and incompetent. But the best takedown comes from the latest economic data reports: Americans overall work longer hours on average than peers in many other rich industrialized countries. Full-time employees clock about 47 hours weekly, according to recent surveys. Nearly 40 percent of full-time workers spend 50 or more hours at work each week. Most working households have seen their annual working hours tick up by 9 to 10 percent between 1979 and 2007. Plenty of workers, especially women, are even juggling more than one job.

It’s true that many people are working fewer hours than they’d like, but that’s not for want of trying: they’ve been unable to secure full-time work so they take up part-time gigs. According to the Economic Policy Institute (EPI), the number of “involuntary part-time” workers has grown since the recession hit to more than 6.6 million.

And more than 3 million so-called “missing workers” have dropped out of the workforce altogether because they’ve become discouraged from even trying to seek a job. While all these workers are less “productive” than they could be, that’s mainly because there aren’t adequate opportunities for them to use their potential.

It’s true that many people are working fewer hours than they’d like, but that’s not for want of trying.

That term Bush pointedly used—productivity—is defined as how much a worker produces per hour, but in politics, it’s often an economic Rorschach: Neoliberal conservatives see productivity as the cornerstone of market-driven prosperity. Leftists read productivity rates as the amount of labor a boss can exploit from a worker for each hour of drudgery clocked. However you define it, productivity itself is a distraction from the core economic problems that are shutting people out of the workforce.

Compared to other wealthy nations, Americans work more hours per year than many others, including workers in Japan, the UK, Canada, and Norway. US workers also tend to enjoy less vacation time compared to most other countries with similar economies, and both men and women retire later in the United States compared to peer economies, even those with the same official retirement age of 65.

One major reason Americans work so much is because their bosses give them the bare minimum in time off compared to other wealthy countries. Uncle Sam offers essentially no legally guaranteed paid leave for all workers (which means you may risk losing income for any time taken off, whether it’s for a holiday or for recovery from surgery).

As EPI points out, rising productivity is generally a good thing. But that’s only a piece of the puzzle, and for the problem Bush is purporting to “fix,” even in times of high growth or high productivity, an economy won’t automatically create more jobs, unless employers have more work for them to do. And bosses have an incentive to hire when there is rising demand that exceeds firms’ current productive capacity. (Theoretically, an employer could dramatically increase productivity by firing its entire workforce and replacing them with robots, while still adding to the unemployment rolls.) Boosting GDP, EPI says, is the most straightforward way of expanding employment rates. This can be done through government-led stimulus, such as infrastructure investment, or tax-credit programs that encourage firms to hire.

EPI’s Director of Research and Policy Josh Bivens says via e-mail, “most productivity gains have not showed up as hourly pay gains for the vast majority of workers so, raising productivity is only step 1 in boosting pay.” Amid the overall erosion of working conditions in recent years—from declining unionization to persistent racial inequity, to a rise in precarious part-time work, he adds, “you need lots of other steps to boost the bargaining power of low and moderate-wage workers to let this translate into better pay and incomes.”

Clearly, there’s more to a healthy economy than getting a greater rate of output per worker. According to EPI, from 1979 to 2013, wages largely stagnated or declined, but economic output hadn’t slackened: “Productivity thus grew eight times faster than typical worker compensation.”

According to EPI, from 1979 to 2013, “Productivity... grew eight times faster than typical worker compensation.”

The divergence between productivity and workers’ gains is why labor groups and even labor officials have pushed various policies that focus on making work pay for workers, and making the workplace fairer. These include boosting minimum wages (including recent initiatives to raise wages for workers on federal contracts), and strengthening policies to promote stable hours and more flexible leave time, along with the recently proposed expansion of overtime pay to many previously exempt salaried workers.

On a macro scale, productivity is often associated with robust economic growth and long-term prosperity, but in personal terms, what are workers today actually producing? We’re often forced to stick with dead-end jobs that make us miserable, wear down our bodies, and inflict degrading treatment. Many do this because we’re pressured to “settle” for the best wage available in a tight job market, to pay back student loans, or to avoid getting evicted from unaffordable apartments. Maybe that’s why surveys show most US workers feel disengaged: Only about one in three feel invested and enthusiastic about their job. Those sentiments are not captured in productivity statistics, but do speak to an enormous visceral sense of wasted potential.

As AFL-CIO head Richard Trumka pointed out in his response to Bush’s comment, “American workers don’t need to work longer hours. They need to be paid better for their extremely hard work and long hours they already contribute to our economy.”