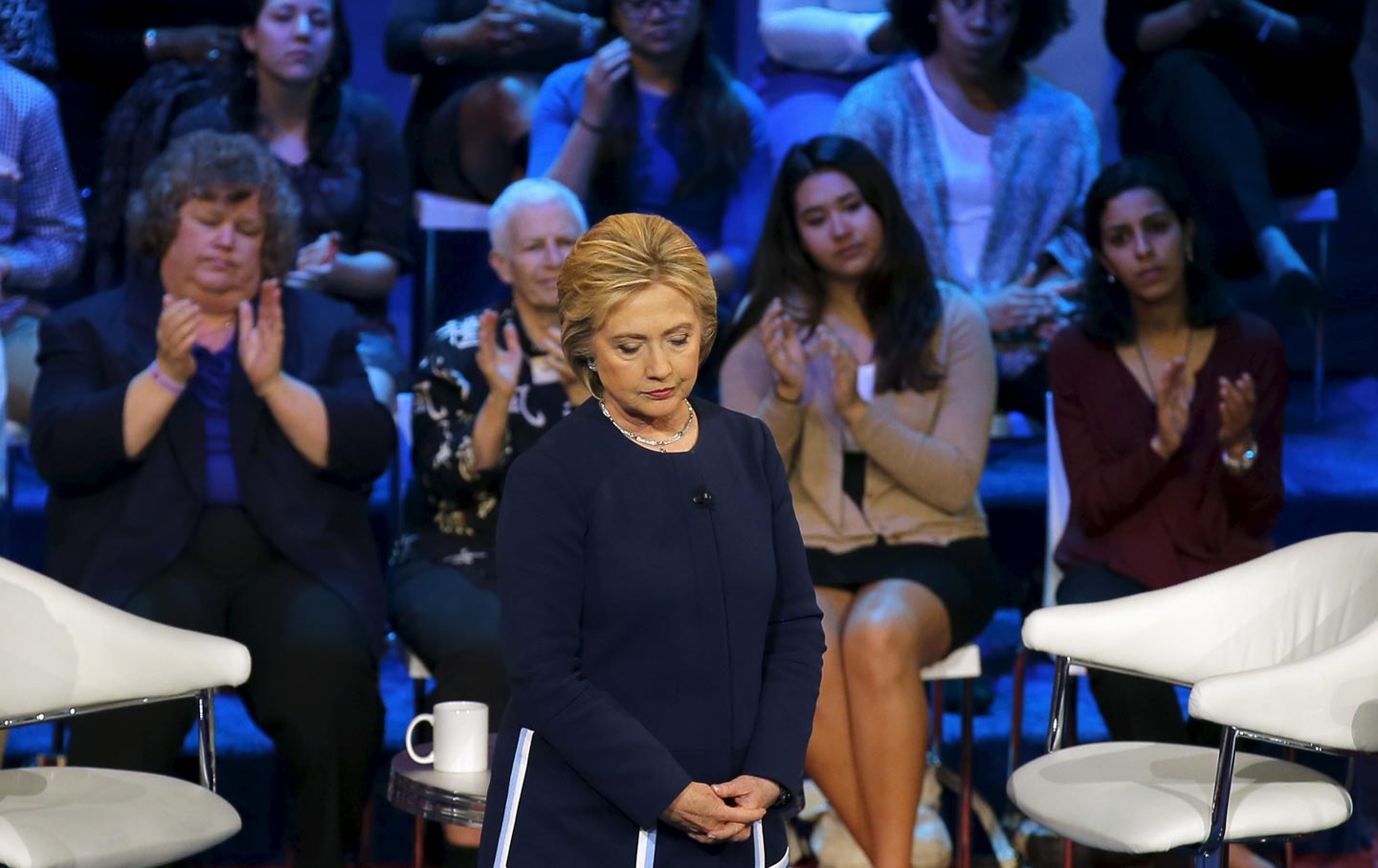 In 1975, Ricky Jackson, then just 18 years old, was wrongfully convicted of murder and sentenced to die in Ohio’s electric chair. He languished in prison for more than 39 years until, in 2014, he was exonerated and set free, earning the dubious honor of serving more time in prison than any other exoneree in US history.

At a town hall event in Columbus on Sunday night, Jackson had the chance to share his story with Hillary Clinton—and ask for an answer. “I came perilously close to my own execution,” he told Clinton, pausing to choke back tears. “In light of what I just shared with you, and in light of the fact that there are documented cases of innocent people who have been executed in our country, I would like to know how you can still take your stance on the death penalty in light of what you know right now?”

There has been almost no meaningful political conversation this election about the United States’ unique predilection for state-sponsored killings.

For an election season that has been punctuated by the newest bipartisan buzz phrase—“criminal justice reform”—yet has featured almost no discussion of the death penalty, this moment was both electric and long overdue. “The audience was quiet and could hear pin drop, they were mesmerized,” Mark Godsey, director of the Ohio Innocence Project, told Cleveland’s Plain Dealer. When Clinton responded to Jackson by repeating her support for the death penalty, albeit a “very limited use of it,” the exchange crystallized into something more than interesting or noteworthy. It became iconic: one of those rare election moments that endures long after the last votes have been counted. Tweets poured in, followed by articles, and for an all-too-brief moment, the fact that the United States continues to engage in state-sponsored killings—and that hundreds of innocent Americans have been sentenced to die—was the subject of serious campaign conversation.

Only nine nations continue to execute their citizens on a regular basis. We in the United States find ourselves in a sorry club—aligned with the likes of North Korea, Iran, China, and Sudan. Bernie Sanders—the only current candidate on either side who is opposed to capital punishment—likes to regularly call attention to our embarrassing singularities, such as our unique refusal to provide paid childcare leave or our idiosyncratic healthcare costs. But almost no meaningful political conversation in the election thus far has been dedicated to the United States’ other unique predilection: state-sponsored killings.

In 2014, the United States executed 35 people. Perhaps this relatively small number is the reason that capital punishment has been a mere footnote in this election season. Does it begin to feel more significant when you realize that this statistic sandwiches us between Iraq and Sudan for the most confirmed state executions in 2014? What about the fact that 34.6 percent of executed Americans are black, despite representing only 13.2 percent of the general US population? Does it begin to make more sense when you learn that 94.5 percent of prosecutors in death penalty states are white? Does it worry you that, since the death penalty was reinstated in the United States in 1976, for every 10 people executed one has been found innocent and set free? If you knew that a plane you were boarding had a one in 10 chance of spontaneously combusting midflight, you probably wouldn’t get on.

So why have American voters been content to allow another election season to pass by without meaningfully addressing the broken death penalty system that inexplicably persists in our country in the year 2016? Why do we talk about criminal justice reform without talking about the fact that we continue to sanction government killings? This is especially perplexing given the drastic reduction in public support for the death penalty, which stands at a 40-year low. In 1996, 78 percent of Americans supported the death penalty. In 2015, only 56 percent were in favor. Among Democrats, that number is even lower—40 percent in 2015.

When Ricky Jackson challenged Clinton on her support of the death penalty, it was one of only a handful of times she had been asked to respond to the issue this campaign season, and she answered much the same as on those occasions. “What I have said and what I continue to believe is that the states have proven themselves incapable of carrying out fair trials…,” Clinton explained. “And I have said I would breathe a sigh of relief if either the Supreme Court or the states, themselves, began to eliminate the death penalty.”

The trouble with this stance is the assumption that the problems that plague state death-penalty sentencing procedures would somehow be eradicated on a federal level. Overzealous prosecutors who commit misconduct in order to secure convictions are undoubtedly not just a state problem. Eyewitness identifications will be just as fallible in a federal court. Coerced confessions happen everywhere. Minorities make up a majority of death-penalty sentences federally as well as at the state level.

In her response to Jackson, Clinton acknowledged “struggling” with the issue but said she ultimately believes the death penalty should be reserved for extreme cases such as “horrific” mass killings. “[M]aybe it’s a distinction that’s hard to support, but at this point, given the challenges we face from terrorist activities primarily in our country that end up under federal jurisdiction for very limited purposes,” she said, “I think that it can still be held in reserve for those.”

Clinton was right: Many thoughtful people do find this distinction hard to support—including the parents of Martin Richard, the youngest victim of Boston Marathon bomber Dzhokhar Tsarnaev, who wrote a letter to The Boston Globe stating that they hoped Tsarnaev would receive a life sentence, not a death sentence. (Despite their plea, Tsarnaev is currently awaiting execution on federal death row.)

Why are voters content to allow another election season to pass by without addressing this country's broken death penalty system?

Nonetheless, it’s true that Clinton’s present position does represent an evolution from her past, when her support for capital punishment was such that she lobbied for a federal bill that expanded the number of crimes eligible for the death penalty. She has since reversed her support for the bill—which is both welcome and acceptable. What is not reversible are the hundreds of executions which have been carried out since then.

Sanders’s stance is much more straightforward than Clinton’s, which is why it’s a shame that he was not asked to give his thoughts on Jackson’s question. “In a world of so much violence and killing, I just don’t believe that government itself should be part of the killing,” he said during an earlier debate. He has also cited the probability of executing an innocent person, as well as the racial inequities of death penalty sentencing. These have been long-held beliefs of his, yet it is not a subject he often expounds upon without prompting. (He did, notably, call for an end to the death penalty during an October 2015 speech on the Senate floor.)

One candidate who has made headlines expounding on the death penalty is—no surprise—Donald Trump. In December, he caused a stir after telling a union of New England police and correctional officers in December that “one of the first things I’d do in terms of executive order if I win will be to sign a strong, strong statement that will go out to the country, out to the world, that anybody killing a policeman, policewoman, police officer, anybody killing a police officer: death penalty.”

The typically Trumpian legalities of this statement aside—death penalty administration is handled by the states, and mandating the death penalty via executive order would be uncharted territory—Trump’s rhetoric on capital punishment hardly seems shocking when stacked against the rest of the outlandish statements that constitute his would-be policies. But it is a mistake to dismiss his words as mere attention-seeking bluster.

In the spring of 1989, as he was undergoing a messy, tabloid divorce, Trump found the time to call for the execution of five innocent teenagers. “Bring Back the Death Penalty,” read the headline of the full-page ad Trump purchased in New York City’s four major daily newspapers. “Yes, Mayor Koch,” it continued, “…I recently watched a newscast trying to explain ‘the anger in these young men.’ I no longer want to understand their anger. I want them to understand our anger. I want them to be afraid.” The teenagers whose deaths Trump was calling for—Anton McCray, Kevin Richardson, Yusef Salaam, Raymond Santana, and Kharey Wise, all between the ages of 14 and 16—had just weeks prior been arrested and charged with the brutal attack of Trisha Meili while she was jogging in Central Park.

As we now know, the “confessions” given by the boys were shaky, inconsistent, and false: coerced by police under great duress with no physical evidence or independent corroboration. The Central Park Five, as they are now known, were all wrongfully convicted and sent to prison; their innocence was not uncovered until the real perpetrator crossed paths with Kharey Wise in prison and, more than a decade after the convictions, unburdened his conscience with a confession of guilt, which was confirmed by DNA testing. That however has not induced Trump to reconsider his position. He has refused to apologize for calling for the deaths of innocent juveniles, and was furious at the multimillion-dollar settlement that the City of New York ultimately approved for the Central Park Five, calling it “a disgrace.”

As the election continues, we have the opportunity to push politicians toward the right side of history. In the midst of the 2008 election season, CNN compiled a list of key campaign issues, including the economy, abortion, LGBT issues, immigration, and guns. Criminal justice reform wasn’t even on the table. In 2016, mass incarceration, police violence toward communities of color, the failed war on drugs, and even shifting attitudes toward ex-offenders have permeated the rhetoric of both the Republican and Democratic candidates. The progress we’ve made—spurred in large parts by social movements like Black Lives Matter—is incredibly encouraging. But if voters care about the systemic racism and ineffectual, biased policies that plague our criminal justice system, we need to talk about the death penalty more.

"No serious Democratic candidate should be able to support the death penalty.”

Capital punishment in the United States represents a flagrant human-rights violation, inflicting cruel and unusual punishment on our most disenfranchised citizens in an arbitrary and unjust manner. It is an ineffective deterrent to crime. It is racist, it is classist, and it is incredibly expensive. It is a human system, and therefore fallible. And the fact that it continues to exist in this country, in 2016, matters. Voters need to make that clear.