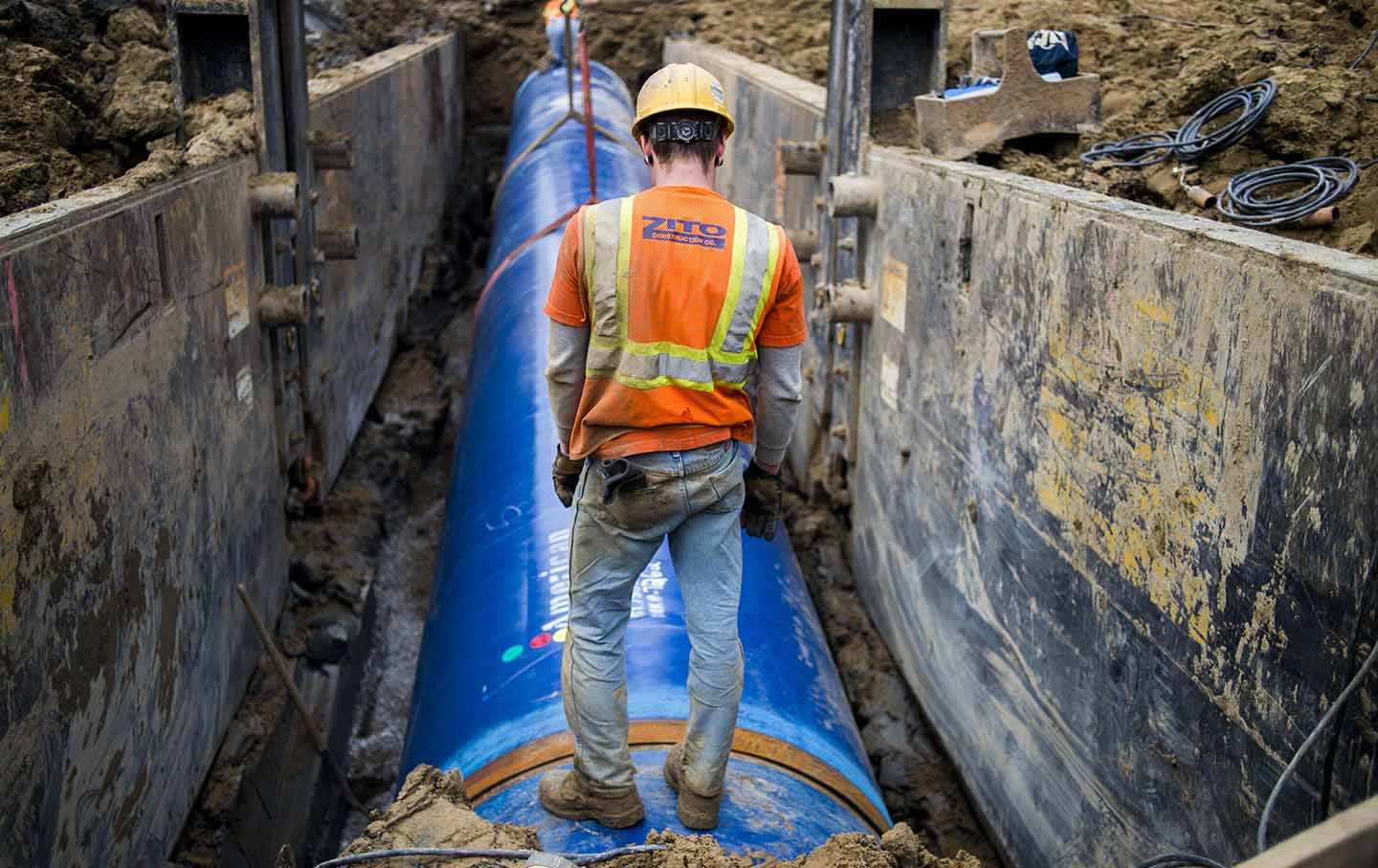 A construction worker stands atop a portion of the Karegnondi Water Authority pipeline in Lapeer County, Michigan, on March 30, 2016. (Jake May / The Flint Journal-MLive.com via AP)

The Center for American Progress has been a White House in waiting for mainstream Democratic candidates for over a decade now. When it places something on the agenda, that becomes part of mainstream discussion on the center left. And at its Ideas Conference this week, it embraced one idea that has been kicking around the left for a long time: guaranteed employment for anyone who wants a job.

In “Toward a Marshall Plan for America,” CAP frames this as an answer to growing despair and acute economic pain bred by stagnant wages and lack of opportunity. But few advocates who have been pushing a federal-job guarantee for so long were consulted or even cited in the proposal. And while they’re generally thrilled that their life’s work has entered a broader conversation, they’re concerned that something is getting lost in translation.

The federal-job-guarantee concept goes back to Huey Long’s Share Our Wealth plan in the 1930s. The Rev. Martin Luther King Jr. endorsed “employment for everyone in need of a job” in the civil-rights era. Under this framework, the government would fund jobs with a living wage and benefits similar to public-sector workers’. The open-ended program would be funded as needed, expandable in recession, and contractable when the economy recovers. Government would become the employer of last resort.

CAP’s version is somewhat targeted. Its focus is on non–college graduates specifically, which it says have been disproportionately left behind economically. Real income fell for workers without a college degree from 2000 to 2016, and mortality rates for this subset have grown. So CAP proposes a commission for a “national Marshall plan” to fund living-wage jobs at $15 an hour. “An expanded public employment program could, for example, have a target of maintaining the employment rate for prime-age workers without a bachelor’s degree at the 2000 level of 79 percent,” according to the policy brief. Right now, that would mean 4.4 million jobs at a cost of about one-quarter of Donald Trump’s tax cut.

What kinds of jobs would be created? CAP suggests that home health care, child care, and teaching aides are all urgently needed. It also cites infrastructure investment for job creation–roads and bridges, but also schools and hospitals. Interestingly, CAP also brings up the concept of public apprenticeships: paying people to engage in full-time training for high-growth occupations, with the idea of spinning out skilled workers to the private sector.

I talked to several supporters of public jobs and the federal-jobs-guarantee concept. All of them welcomed CAP to the discussion. “They’re invoking the language of a job guarantee which is a permanent program, that’s great,” said Pavlina Tcherneva of the Levy Economics Institute at Bard College. But while the adoption shows the momentum for public job creation as a political force, job-guarantee supporters had several concerns about CAP’s formulation.

“Their discussion was heavily focused on the provision of employment for those with a high-school diploma or less,” said Sandy Darity of Duke University, one of the job guarantee’s greatest champions. To him, this leaves behind large segments of the population who might need jobs. For example, Darity points out, the unemployment rate for African Americans with some college education is higher than for whites who have never finished high school. (Racial issues are “really repressed in their analysis,” Darity noted.) The recently incarcerated and recent veterans also have high unemployment rates. “We think anybody who cannot find work in the private sector should have the option,” Darity concluded.

Solely targeting non–college graduates, a measure clearly designed to serve a political goal (much of the CAP paper details the shift of the working-class vote in the Midwest from Barack Obama to Donald Trump), necessarily limits the reach of the program. “How would this plan have helped after the Great Recession, when 800,000 people a month were losing jobs, including skilled workers with college degrees?” asked Stephanie Kelton, economics professor at the University of Missouri–Kansas City and former budget aide to Bernie Sanders. “If we’re genuinely trying to achieve full employment, we shouldn’t be targeting 79 percent labor-force participation. We should eliminate involuntary unemployment.”

Darity estimated that the 4.4 million job target was about two or three times less than what’s needed for a real job guarantee, and Tcherneva put it closer to four or five times less. For their part, Ross Eisenbrey and Larry Mishel of the Economic Policy Institute were more comfortable with CAP’s scope, but questioned the political overlay. “I’m not sure this responds to Trump voters, who are looking for middle-class jobs,” said Eisenbrey. “They’re not desperate for $15/hour.”

One familiar complaint with the job-guarantee concept in general is that making essential services like health care and education reliant on available dislocated workers is dangerous, because the availability of those services would expand and contract based on the state of the labor market. “We think we need universal child care, we don’t want child-care work subject to this accordion,” said Mishel.

But job-guarantee advocates say this misses the crux of the debate. “The goal in and of itself is job creation.  You create the job to fit the person,” said Pavlina Tcherneva, who cited a number of possible avenues for the program. For example, jobs in health care and education and environmental protection have been perpetually underfunded, and could be boosted by a permanent public workforce.

Apprenticeships would be eminently expandable in rougher times (more trainees paid to learn on the job) and could be built into a public-job pipeline with opportunity for promotions and raises, what Darity calls “an occupational ladder.” Plus, a job guarantee can eliminate how we perpetually defer community investments, whether they be in alternative energy or broadband deployment, basic maintenance and upkeep, or “human infrastructure” where there are local deficiencies. The Golden Gate Bridge gets painted once a year and it takes 365 days. Habitat for Humanity has an endless supply of requests to build homes. Lead pipes in Flint could use replacement. Preparing our inadequate roads for self-driving cars, if the promise is real, will literally demand the largest infrastructure project in American history. This doesn’t have to be paying people to dig holes–there’s plenty of ongoing work to be done for all types of job seekers.

Finally, Tcherneva said that a job guarantee would realize the promise of full employment and limit the force of recessions through its “automatic stabilizer” effect. “Right now an unemployed worker’s spending pattern is different if they don’t know what’s going to happen to them,” she said. “With a job guarantee, this is completely transformed.”

The job guarantee is sometimes placed in opposition to a universal basic income for all Americans, but both address the same problem and can coexist. There are “participation income” proposals, for example, that tie a basic payment to making a contribution to society. But a job guarantee combines the baseline benefit to the dignity of work and self-reliance with tangible benefits to productivity and the economy. It also can set labor force benchmarks, on wages and benefits, that a UBI, normally pegged at a sub-poverty level of $10,000–$12,000 a year, just cannot provide. Companies will have to adapt if a federal-job guarantee offers health care, sick leave, and a pension, or else risk losing workers. “One of the purposes is to eliminate low-wage labor,” said Darity.

There are lots of versions of the job guarantee. Eisenbrey has worked on proposals using block grants to high-unemployment areas in times of stress, for example. It’s a good debate to have, and something leaders across the center-left spectrum should engage in. CAP is proposing a commission to tackle this idea. The group should draw on what’s already been done, and invite those who have toiled on this for years to the table.