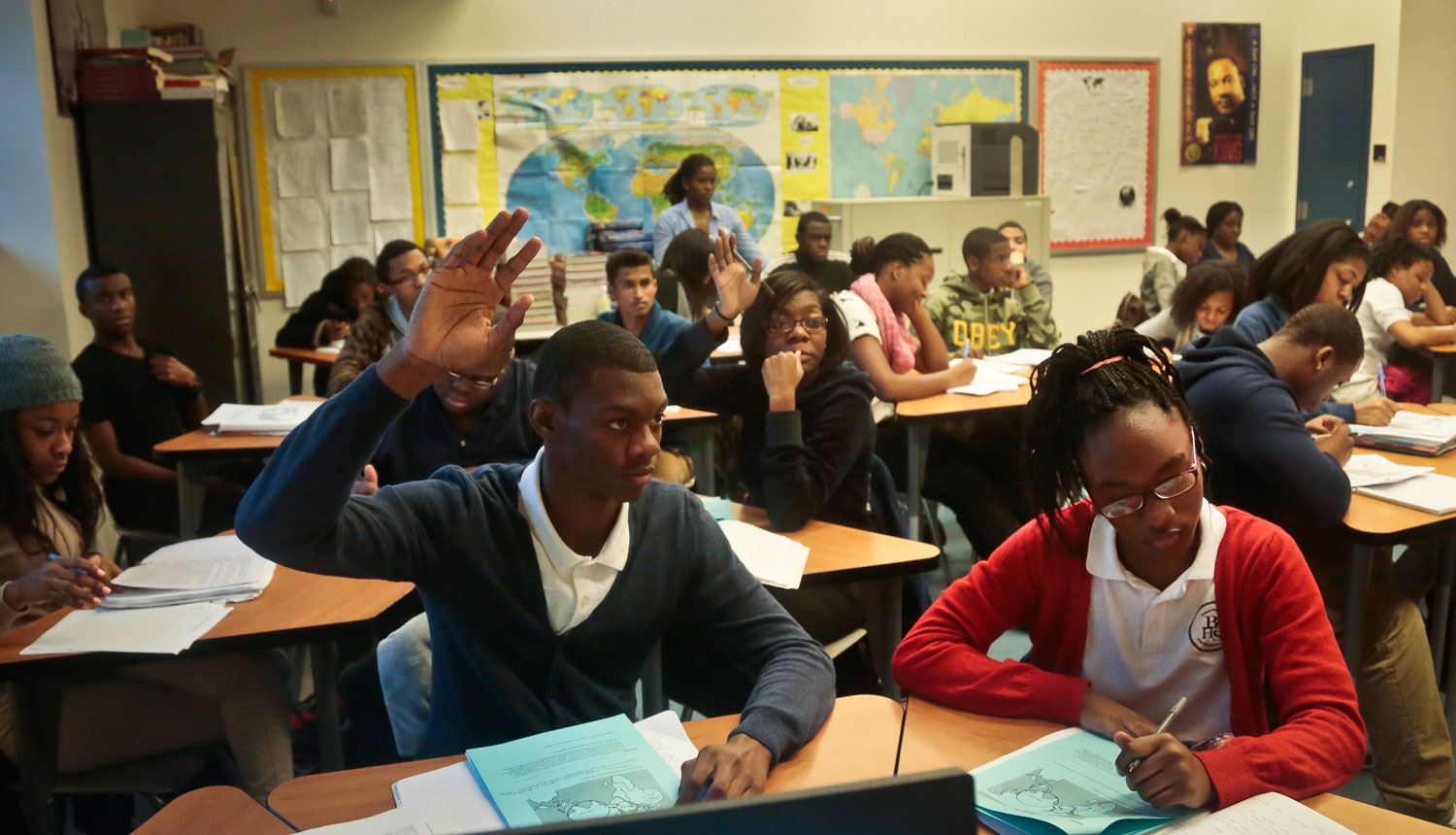 Incoming New York City Mayor Bill de Blasio does not lack for issues demanding his immediate attention. Among them are the historic levels of income inequality and homelessness, as well as the matter of a militarized police force and its abuse of power, particularly with regard to communities of color. So he certainly has his work cut out for him. But if he wishes to address many of these urgent issues at the same time while also tackling something of great importance in its own right, a major priority for his administration should be closing the school-to-prison pipeline—the name given to a set of regressive, “zero tolerance” policies that frequently end up pushing students into the criminal justice system instead of through school.

In May of last year, the New York Times editorial board described the situation as follows: “School officials across the country responded to a surge in juvenile crime during the 1980s and the Columbine High School shootings a decade later by tightening disciplinary policies and increasing the number of police patrolling public schools. One unfortunate result has been the creation of a repressive environment in which young people are suspended, expelled or even arrested over minor misbehaviors—like talking back or disrupting class—that would once have been handled by the principal.”

In fact, the results of these policies are more than just “unfortunate”; they’re racist. The stats bear this out. As Molly Knefel reported in Rolling Stone, half of the New York City students suspended during Mayor Michael Bloomberg’s tenure were black, even though black students made up around one-third of the student population. And this is on top of the overpolicing they face in their daily lives, namely as a result of the controversial practice of stop-and-frisk.

In the same article, Donna Lieberman, executive director of the New York Civil Liberties Union (NYCLU), noted that students living in neighborhoods with high rates of stop-and-frisk are also more likely to be suspended than their peers from neighborhoods with lower rates.

The result, according to the NYCLU, is that kids with criminal records consisting mostly of minor infractions that could have been resolved in school face further discrimination when applying for college, scholarships and jobs. This can also have an effect on whether their families are eligible to live in public housing, since people with criminal records are barred from many government assistance programs. And this doesn’t even take into account the psychological toll that coming into contact with the criminal justice system can have on students who are still wading through the thickets of childhood development. Whether in school or out, these children are being subjected to state use of a police force to address social issues that governments have failed to tackle. This practice is ruining lives, mostly of black children, before they even get a chance to start.

In order to begin closing the school-to-prison pipeline, the NYCLU report provides solutions, starting with investing more money in education than in the correctional system—but also using methods such as peer mediation, guidance counseling and mentoring in order to reduce conflicts. The report suggests allowing “students to have a role in designing school discipline codes,” the rationale being that when students understand the rules, they are more likely to comport themselves according to those rules.

New York could follow the example set in Meridian, Mississippi, where in March of last year the Department of Justice and the Meridian Public School District agreed to what was called a “landmark consent decree.” The result of a two-year investigation by the DOJ, the consent decree was aimed at ensuring that Meridian, which is notorious for its excessive punishment of minor infractions, “administers student discipline in a fair and non-discriminatory manner, reduces the disproportionate assignment of exclusionary sanctions to black students, and provides all students with an equal opportunity to learn in a safe, orderly, and supportive environment.” It’s a fantastic start to reducing the amount  of interaction children have  with the criminal justice system and moving toward educating  them instead.

De Blasio understands that New York helps to set a precedent for policy across the nation. By closing the school-to-prison pipeline and recommitting the city to educating its young people rather than policing them, he could send a message that America’s youth deserves better. And he could help stem the tide of fear-based policy-making that does more harm than good to our children’s future.