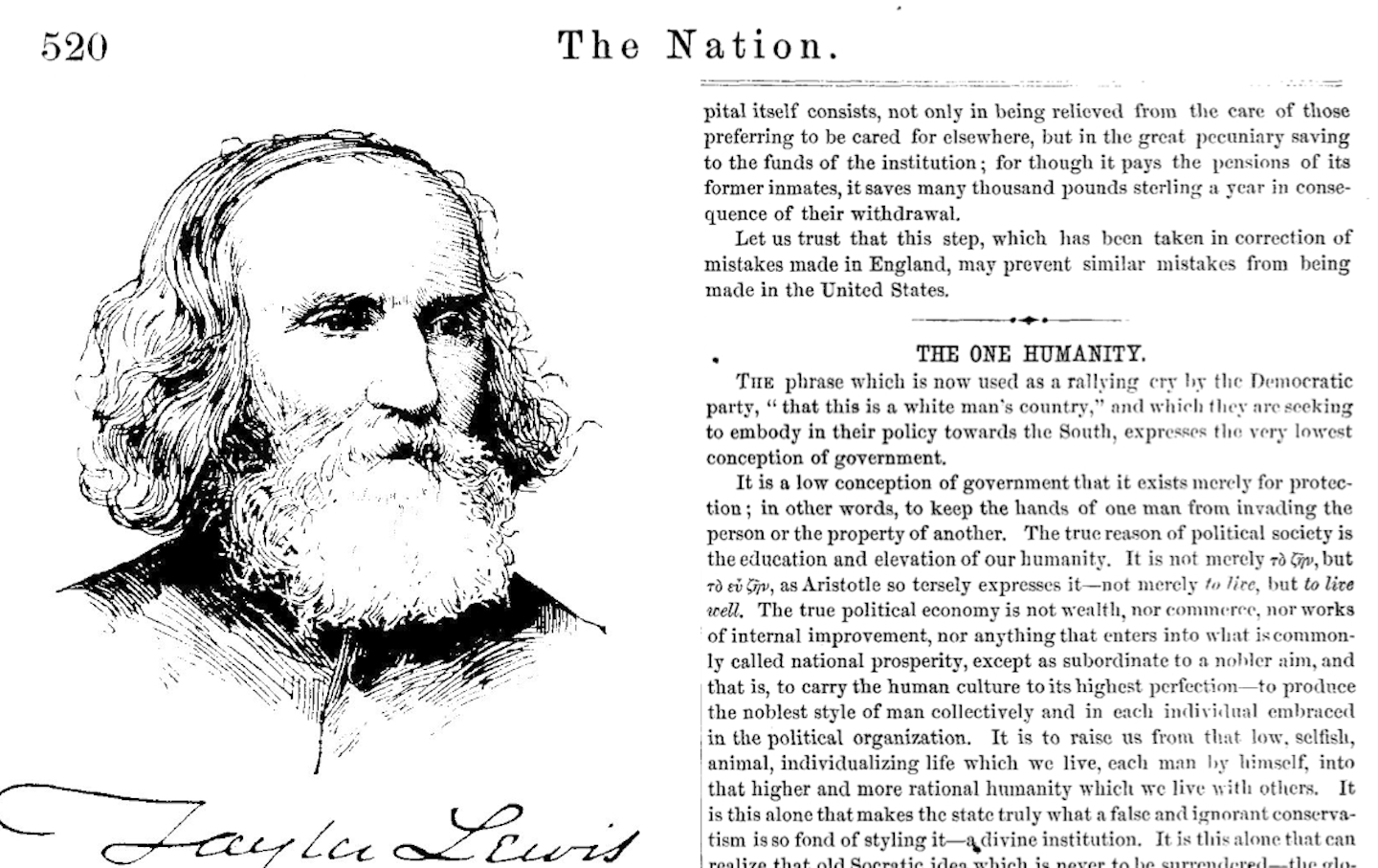 Exactly 150 years ago this week, just a few months after its founding, The Nation published a scathing article denouncing the racism endemic in the United States, including in the North, immediately after the Civil War. “The One Humanity,” from the issue dated October 26, 1865, was unsigned, like almost all Nation articles until World War I, but research indicates that it was written by a white Bible-and-classics scholar named Tayler Lewis. Withering in its indictment of the hatred of black Americans that Lewis argued existed in the minds of even the most steadfast partisans of progress and equality, the essay is disturbing to read today, not least because Lewis was specifically directing his arguments to well-meaning, well-off, white liberals who formed much of The Nation’s readership back then—as they, quite frankly, still do today.

Six months after Abraham Lincoln’s assassination and Robert E. Lee’s surrender at Appomattox, the postwar order in the United States was uncertain, the spoils of the war still up for grabs. Lincoln’s successor, Andrew Johnson, a Southern Democrat whom Lincoln had only asked to be his vice president so as to present a front of unity in the 1864 presidential election, was indicating a willingness to accelerate the Southern states’ reentry to the Union, with no protections for the formerly enslaved. He and his associates were eager to ensure that black Americans would have no constructive role in the social or political life of the country, and that their economic exploitation, whether described as slavery or not, would continue apace.

This is what Lewis was referring to in the opening line of “The One Humanity,” when he wrote: “The phrase which is now used as a rallying cry by the Democratic party, ‘that this is a white man’s country,’ and which they are seeking to embody in their policy towards the South, expresses the very lowest conception of government.”

Implicit in such a claim, Lewis held, was “the greatest and most practical question now before this nation,” since racism was the fundamental impediment between the idealism of the American democracy and its realization.

We boast of having gone beyond others in social and political science, but we have come at last to a place where the claim is to be most solemnly tested. This question of race is put before us as a stone of stumbling, or a rock of exaltation. It is for the rising or the falling of our Israel.…

Over and over again, in every form but one, have we set forth the principle of human equality before the law. We have boasted of our land as the free home of all races. We have insulted other nations in the vehemence of our declamation. And now are we brought face to face with a question that will test it all. We are reluctant to concede to the African what we boast of giving to others—what we almost force upon others presenting no higher claims, apparently, of intellectual or of moral worth.

Most fascinating is not Lewis’s diagnosis of the problem, or even his analysis of its cause, but his description of its reach. Offering an argument radical even among abolitionists at the time, Lewis wrote that racism was not simply present in the minds of slave-owners and and other outright oppressors; it existed even—sometimes, especially—among those with good intentions.

Why this odious distinction as against one race? It is because the loathsome trail of slavery has passed over us, leaving its foul slime upon its immediate victims and producing everywhere a misgiving as to their proper humanity. It has tainted the national mind. The doubt is openly avowed by some; it lies as an unsatisfied query in the minds of others; it lingers unconsciously, or semi-consciously, with many whose philanthropy or political consistency holds them back from confessing it even to themselves; it haunts the soul as a ghostly prejudice, even when philosophy and religion have made us reject it as a dogma.

Then, dramatically, Lewis names the ghost: “We do not fully and heartily believe that the negro is a man.”

As a description of reality, it was a self-evident fact: Dehumanization of blacks was, indeed, a coping mechanism for whites.

Were it not for this, we could not treat the colored man as we do in our social and religious relations; we could not bear the moral and political inconsistency; we could not face either the world or our own convictions; we should have to shut our Bibles; we could not read, or bear to hear read, our Declaration of Independence. Thus are we compelled in self-defence to dehumanize the negro. It is demanded as an opiate to conscience. If he is truly a man, as we are men, then are we so greatly guilty.

Lewis ended his essay with a call for white Americans to stop evading the question, to ask themselves whether black lives matter or don’t. Answering in the affirmative would require a radical reorganization of government, society, and the economy—indeed, a moral revolution; answering in the negative would require disposing with all professions of belief in liberty and equality, reneging on the promises of the Founding, dispensing with the idea of America itself.

We must meet the issue fairly, and settle it once and for ever, before we can deal with others that are collateral to it. We do not sufficiently think how vital and fundamental this question is. We are evading it. Some do this consciously, many unconsciously, and without any distinct idea of the nature and results of their reasoning.

To a great extent, Lewis added, light years ahead of his time, our deepest beliefs are revealed by the language we employ.

We talk humanely, or affect to do so, without seeming to be aware that the style we adopt, the arguments we employ, though seemingly in his favor, are really dehumanizing the subject to which they are applied. We do not speak or write thus concerning any other classes among us, however low we may think them in the outward social scale. Even when we advocate the cause of the African, we do it in a manner that would be thought insulting and utterly undemocratic in any other case. We use the language of masters and owners. The style of our ordinary questions betrays this. It is not what is due to them, as men equally with ourselves coming under the reciprocal obligation of the Golden Rule, but “what shall we do with them,” what shall we give or concede, or what shall we withhold…. The way in which we speak to the colored man, and of the colored man, shows an unconscious yielding to the anti-christian prejudice we are striving to overcome

Much has happened in the last 150 years: An empire has risen and begun to fall; Jim Crow came and went and has come again; seven years ago today, a black man was elected to the presidency. But so much has not changed. In the conversation over the past two years about racism in America, this much has become clear, at least with regard to whites: We still use the language of masters and owners. We are still reluctant to ask what is due to them. We still reiterate and reinscribe, at every single step, the prejudice we are striving to overcome.

Lewis, using the male pronoun typical of the time, noticed the same thing this very week in 1865:

There is a timidity, an apologetic pleading, that we would not think of adopting if we were advocating a right grounded on the clear conscious acknowledgment that those who are thus defended are really men, and have the same rights which our religious code, no less than our Declaration of Independence, challenges for all men.

Lewis said that he preferred not to dwell “on the fearful consequences” that “leaving this issue unsettled, or settled wrong, would have upon the most important aspects of human belief—its debasement of our politics, its degradation of our psychology.” A century and a half later, with our politics thoroughly debased and our psychology utterly degraded, maybe it’s time to dwell on those consequences.

“The degradation of one part is the degradation of all,” Lewis wrote in the conclusion to his essay, “and hence the thought we would labor to impress, that every man has both a selfish and a fraternal interest in the elevation of every other man.”