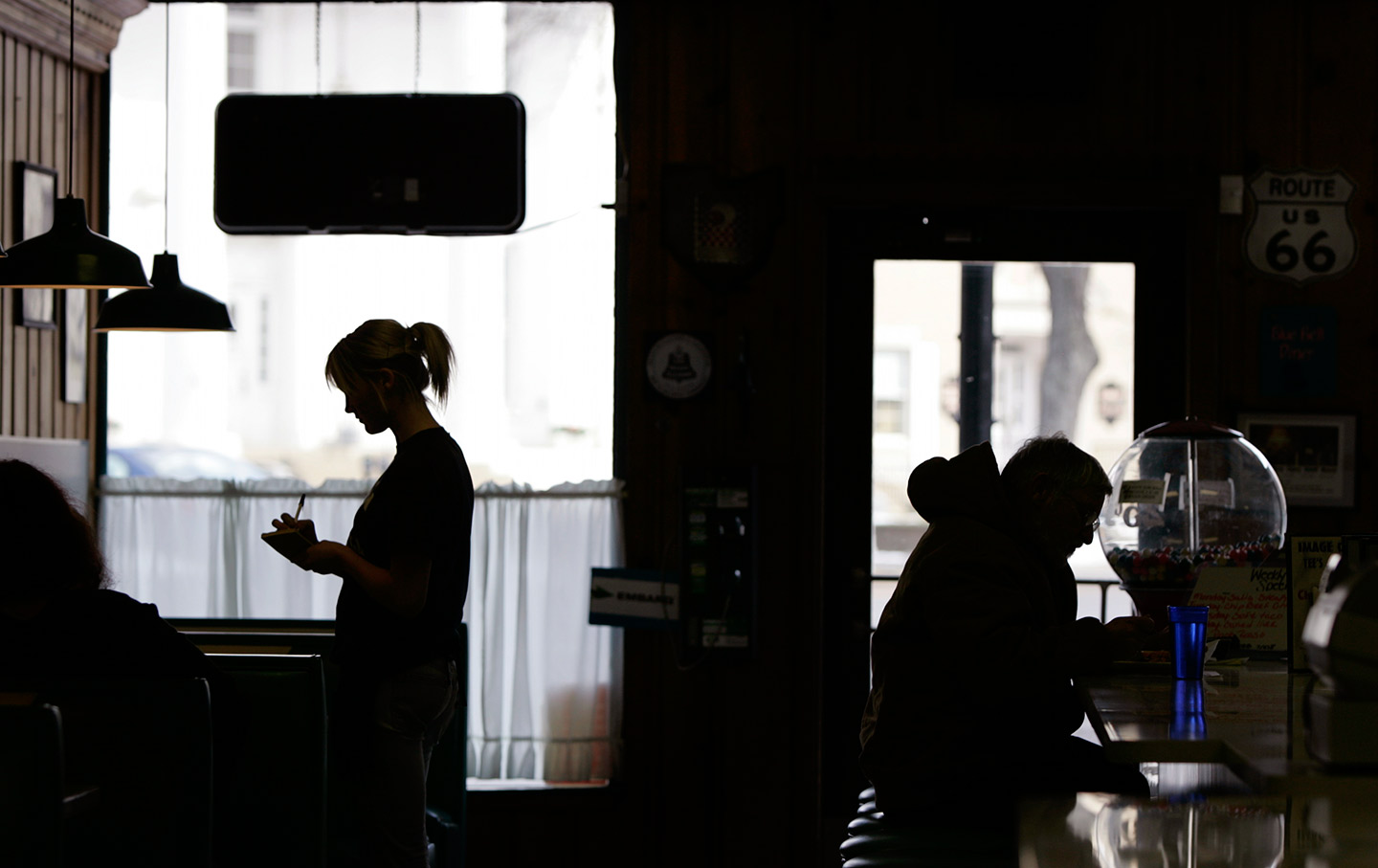 In her cover story on sexual harassment in the food-service industry, Bryce Covert writes that “Sexual harassment is a fact of life for far too many women across the economy, with about 60 percent saying they’ve experienced it. But the food-service industry is in a category all its own. In interviews with The Nation, many industry veterans struggled with how to describe the harassment or even where to begin, given how pervasive it was. (Several of the women whose stories are recounted below are referred to by first name only, due to privacy concerns.) Asking them to talk about it was like asking a fish to describe water. For the people who serve us dinner and drinks, it’s all but a way of life.” Three of the women who spoke with Covert recount their experiences below.

worked as a server in restaurants in Mississippi and Illinois for six years.

I was a theater major. When I got out of school, I didn’t have any money, and [restaurant work] was something that I could easily start doing. The energy and excitement of working in a restaurant is like no other job that I’ve ever had. I would never have imagined growing up that if I got a job in a restaurant, I would get to…learn all of the things I’ve learned about the world. Learning about wine means learning about places…. When you work with conscientious restaurants, it means you’re learning about farms…. So much of our economy is based on the factory-farming system….

“Whoever your team is for the night, it’s kind of like you guys against the world. There’s a bond that forms; you pour your whole self into a job like that. Honestly, I think working in a restaurant is one of the best jobs in the world. But that sense of freedom does carry over into harassment, sometimes, or abuse. [At a restaurant in Mississippi], there was this guy…. He was a high-roller type, spent a lot of money in the restaurant. He got really drunk one night…. He became interested in me that evening and was talking to me a lot, and at first…you’re like, ‘Oh, well, we’re just chatting and I’m working’—you always have to please.

“If you make a fuss about it, you’re somehow being disloyal to the work that everybody’s doing.”

“He wanted me to leave with him and I didn’t want to, and he waited on the porch of our restaurant for me. I had to hide in the kitchen with other people until he left. In the moment, I didn’t feel the ability or agency…to outright refuse him, to be like, ‘No, you need to leave right now.’ 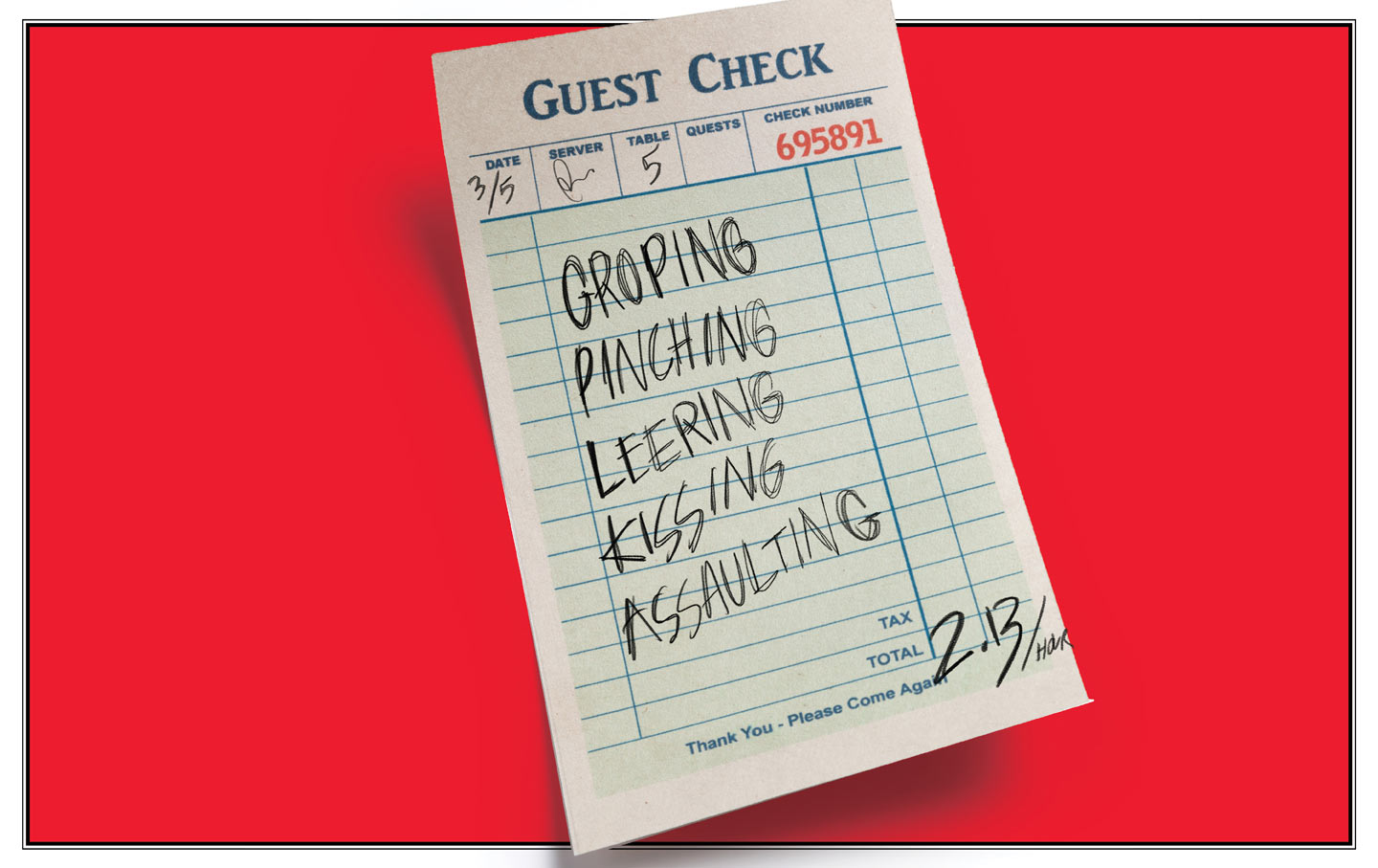 When Harassment Is the Price of a Job

“I only really started to identify times when I’d felt harassed later, because you push them away when you work in the restaurant industry. When I was a food runner [in Chicago], I was carrying plates of food worth $50, $75 a plate, I was explaining dishes that were made every night, I was in menu meetings every day…. It was a fun job, but a hard job. I walk in on this particular day in the middle of busy service, and in front of the entire kitchen, [the head chef] says, ‘Yo, Anna, you fucked anybody in here?’ I remember being embarrassed, being angry and hurt. [But] you’re so busy, you stuff it under and keep moving…. I remember [I took] the kind of attitude that I feel like a lot of us as women working in the industry had to adopt: ‘They’re going to do this to us, and we gotta work.’ I remember I said something back like, ‘Ha, not yet,’ because you had to be tough and you had to play back, instead of saying, ‘Hey, that’s an inappropriate question to ask me as my boss.’ He was the golden boy of this restaurant group. I thought he was untouchable.

“[Plus] it was exciting and it was fun work, and you didn’t want to have to give it up because you’re the person who called out behavior that was bullshit. There’s a pressure there that if somebody says something to you…and you make a fuss about it, you’re somehow being disloyal to the work that everybody’s doing. You’re willing to take a lot of shit so that you can do what you enjoy doing. And that can [mean] working a job where you can take home $100, $200 a night but don’t work in an office.

“[That chef] got fired for sexual harassment [of another employee], and I was shocked. I couldn’t believe that the restaurant had done anything about it, because nobody does anything about it. [And I feel] this guilt about not standing up when other people do, or [asking myself] how bad would it have had to have gotten for me to actually go through all the business of filing a complaint with HR against somebody who’s an internationally known chef and everybody’s favorite?

has worked on a food truck, in a butcher shop/wine bar, for a grocery-store bakery, in a coffee shop, and as a server in a full-service restaurant.

Most of what I have to talk about is somewhere between ‘annoying’ and ‘I need to find a new job.’ It’s cropped up from [either customers or co-workers] at every job I’ve had. I’ve definitely encountered ‘bro’ kitchen culture, wherein using racial slurs and sexual slurs was just considered part of how people talked to one another.

“As a bartender, sometimes it becomes your job to provide this girlfriend experience.”

“Probably the most egregious thing that happened to me from a co-worker point of view: I told [the chef] I would be late to work one day because I had to go to a doctor’s appointment. He said, ‘OK, that’s fine.’ By the time I got to work, he had spread the rumor that I was pregnant and asked me in front of the staff whether my husband had gotten one past the goalie, which was a phrase that was new to me.

“I’ve had regulars who get too regular, people who are coming back every night and every other night—and it’s not for what you’re serving, it’s for you…. As a bartender, sometimes it becomes your job to provide this girlfriend experience. People [are] seeing what they can get away with and trying to find out what they’re getting for the money they’re paying.

“If you’re spending money and I don’t feel threatened immediately, I’m willing to put up with a certain level of discomfort if you’re going to help me have a better night. [But] it gets to be a really blurry line sometimes.

“[Harassment] from customers is a lot harder [to address]…. It’s rare to find a workplace that will do much more for you besides say, ‘Well, that’s just part of the job.’

“I never pursued super-high-end kitchen work, and the locker-room ‘bro’-ey culture and the rampant substance abuse are two of the reasons why. Even though I was passionate about it and it fascinated me…I didn’t want to put myself through that…. I didn’t want to try to keep up with the drinking and harassment.”

has waited tables in various places around the country since she was 19.

At the Philadelphia restaurant where Meredith started working in 2016, one of the chefs “was really gross in a way that’s not uncommon…. He always used to say shit when I would walk into the kitchen, be like, ‘Oh my God, baby!’ and stuff like that. You learn to laugh it off as a survival thing, because you can’t afford to get upset every time someone does that or else you won’t survive working in restaurants.” A different chef told Meredith that the chef in question would make comments about her behind her back, including, “She’s really hot—I’m going to fuck her.”

“You need to do the immediate thing, which is to save face so you don’t lose the job.”

At the end of one shift, Meredith had to use the bathroom. “The bathrooms that the staff use obviously can’t be the same ones the guests use. They were really far away; we used to joke you had to request [time] off to go.” Outside the bathrooms, she ran into the chef who’d been harassing her. “He lunged at me—it was weird,” she recalled. “It didn’t match with the interactions we’d been having. [It was] as though we were lovers who were waiting for a moment alone. He lunged at me and tried to kiss me, and I tried to move my head away. He put his arms around me as if he was hugging me, but I could feel him touching the sides of my breasts. I started pushing him to get him off of me, and I had to push really hard, uncomfortably—so it’s clear it’s not a friendly interaction. I was so uncomfortable; you don’t know what to do in that moment. I kind of laughed—I made up something and walked away, tried to pass it off that it was a funny thing that happened.

“You’re the one who doesn’t have power, and no one is going to believe you. You need to do the immediate thing, which is to save face so you don’t lose the job, because you need the job so you have money.

“[But] he just kept getting worse and kept raising complaints about me to the managers. I felt like my back was against the wall. I felt like they sweated me out over the course of the next months…hoping I would quit and the problem would go away.

“I was a mess the whole time: I was depressed, I didn’t want to shower—I felt like I was living in this world where…you look up and see the sky is blue, but everyone around you, they’re not even saying the sky is green, but [they’re] acting in a way that makes it so obvious the sky is green, it makes you feel like, ‘Am I insane?’ It’s very destabilizing, and it shakes you up.” After Meredith threatened to quit in a letter detailing everything that had happened to her, a manager convinced her to stay. A couple of days later, she says, the chef was “just gone” without any explanation provided to her.

“It’s gotten to the point where I simply don’t talk. I’m almost rude to the men I work with, because…it’s preferable for them to think that I’m cold and a bitch if it means that they won’t talk to me. The more I became aware of these things over the years, the more I would feel a clenched fist inside myself…. Anytime anything happens, I feel a combination of angry, wounded… and exhausted.

“It’s like mosquito bites: In and of itself, they may be annoying, but not enough to kill you. But if you get bit by enough mosquitoes enough times…then every time a mosquito bites you, you’ll see red.”