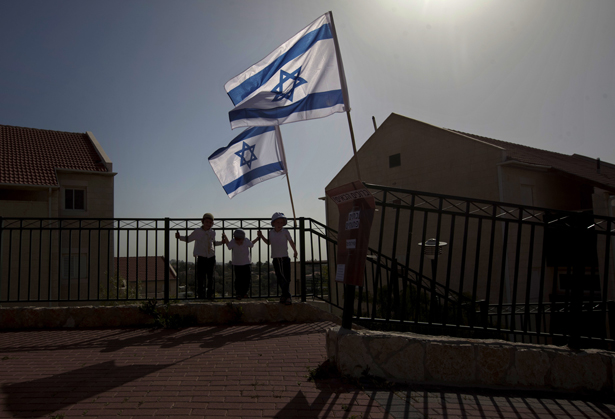 With the recent announcement of a Hamas-Fatah reconciliation and the prospect of a unity government between the rival Palestinian factions, the US-brokered Israeli-Palestinian peace talks have come to a screeching halt.

The agreement, which shocked Mideast analysts as well as the Israeli and US negotiators who’d been working to resume the talks, was a signal of the frustration of Palestinians by the lack of results. It was a vote of no confidence in the process that had been led by US Secretary of State John Kerry.

In response to the Palestinian plan for a unity government and new elections, Israeli Prime Minister Benjamin Netanyahu has broken off talks and angrily told PLO chairman Mahmoud Abbas to choose between Hamas and Israel. Abbas has clearly made his choice.

Given the likely failure of the Kerry initiative, what comes next? Does this mean the end of the two-state solution, a development that has been predicted with increasing vigor for years? If it does, what will replace it?

The problems began when Israel refused to release twenty-five Palestinian prisoners slated for freedom under a previously agreed framework. Part of the drawback was that Israel had agreed to release some Arab Israeli prisoners among them, prompting outrage from Netanyahu’s far-right coalition partners. When Netanyahu rejected the prisoner release, Abbas threatened to file applications for Palestinian membership in a dozen or so United Nations agencies, which would advance the Palestinian bid for statehood to the forefront.

In addition, at a very delicate moment in the process, Israeli Housing Minster Uri Ariel publicly announced plans for 700 new housing units in the occupied West Bank. Given how sensitive the Palestinians are to their dispossession from large swaths of territory currently occupied by settlements, the announcement was akin to planting an IED in the peace process. At that point, Kerry and President Barack Obama became desperate and floated the idea of freeing Jonathan Pollard—an American citizen currently serving a life sentence for leaking US state secrets to Israel—in return for further Israeli concessions. But the Israeli response wasn’t what the US negotiators had hoped for. Instead of the 400 additional Palestinian prisoners whose release Kerry had hoped to place on the table, the Israelis would only agree to release the twenty-five they were supposed to have already freed.

Despite mounting pressure from hawkish “pro-Israel” interest groups intent on freeing Pollard, most observers saw the idea of exchanging him as a Hail Mary pass that could backfire. After being floated, the idea dropped like a lead balloon and appears to have been shelved.

When the talks stalled, Abbas filed applications to nearly a score of UN agencies, against both US and Israeli wishes. If Palestine becomes a signatory to the International Criminal Court, it could potentially bring war crimes cases against Israeli leaders and generals allegedly responsible for attacks against Palestinian civilians. Although Abbas has yet to apply for membership at the ICC, this prospect is one of the reasons Israel shudders at Palestine’s bid for UN recognition.

Abbas’s reconciliation with Hamas also ratchets up pressure against Israel and the United States, neither of which wants to include the Islamist group in the process. The key question: is Abbas serious about the rapprochement, or is it a bargaining chip to gain a more favorable position in the peace talks?

Such agreements between the Palestinian factions have come and gone before. But if this one succeeds, Israel and the United States will have a far different—and less stable—playing field on which to make their moves.

A State Department spokesperson has criticized Abbas for expecting Israel to “negotiate with a government that doesn’t believe in its right to exist.” But the blame game had already begun before the Fatah-Hamas reconciliation. Just as the United States and Israel blamed Yasir Arafat for the failure of Camp David, Netanyahu placed responsibility for the collapse squarely on the shoulders of the Palestinians. But unlike at Camp David, this time the United States has made it all but publicly known that the cause of failure lies with Israel, not the Palestinians.

Time to Move On?

The New York Times published a recent editorial, “Time to Move On,” all but calling for Obama to abandon the peace talks and adopt a policy of benign neglect regarding the parties:

It is time for the administration to lay down the principles it believes must undergird a two-state solution, should Israelis and Palestinians ever decide to make peace. Then President Obama and Secretary of State John Kerry should move on…

An Israeli-Palestinian peace deal is morally just and essential for the security of both peoples. To achieve one will require determined and courageous leaders and populations on both sides that demand an end to the occupation. Despite the commitment of the United States, there’s very little hope of that now.

But what is the practical effect of such abandonment? First, it delights Netanyahu. His primary goal from the beginning of the Obama administration has been either to outlast the president politically (which is why he aired anti-Obama ads during the last presidential campaign) or wear him down through exhaustion. If the talks fail, Netanyahu will have succeeded.

It would be foolish for the Israelis to believe that the region will, in the absence of US involvement, remain at status quo ante. History suggests that when the sides are left to their own devices, the radicals get to work. Provocation, violence and war inevitably follow. The destabilization leads outside parties to resume their efforts to broker peace. Then the cycle resumes.

At least, that’s the conventional narrative—one Israel has been happy to live with since 1967.

As official efforts falter, grassroots movements like BDS—“boycott, divest and sanction”—gain in popularity. That is why Israel has devoted so much money and diplomatic effort to smearing BDS as anti-Semitic or anti-Israel. For Israel, the newest mantra is “delegitimization,” the alleged attempt by the “radical left” to destroy Israel. In truth, BDS is a nonviolent effort that embraces three main principles: ending the occupation, the right of return of refugees and guaranteeing full, equal rights to Palestinians living inside Israel proper.

Those talking points appear increasingly attractive as Israel becomes increasingly rejectionist. Though BDS doesn’t explicitly favor a one-state solution, any reasonable observer, including many centrist Israeli journalists and political analysts, concede that this is the direction events are taking.

But in the face of opposition from Israel and the United States to a one-state solution, how would you get there? Recalling the fall of apartheid South Africa, it took several years for the sanctions movement to gain traction. It faced the same type of opposition from liberals and conservatives who believed it was a solution too extreme or alienating for whites. Over time though, international leaders, business executives and activists came to understand that the pain of sanctions was much less than the long-term suffering apartheid had inflicted on black South Africans.

Through the BDS movement, Israeli companies and products will become targets for boycott. Foreign companies aiding in the occupation will also be tainted. Europe will lead the way in this, and the United States will follow behind, much like with the South Africa paradigm in the 1980s.

All this has already begun happening. The largest Dutch pension fund announced it would boycott Israeli banks because of their investments in the occupied territories. Norway’s sovereign wealth fund similarly divested from two Israeli companies, one of which is owned by Lev Leviev, who builds Israeli settlements and mines conflict diamonds in Africa. Jordan Valley farmers have lost $30 million in sales to EU countries over the past year (fifteen percent of their overall market). Academic associations in Britain and the United States have passed resolutions endorsing BDS.

Though Israel has a robust economy largely unscathed by the financial turmoil of the past decade, it is export-based and anchored by technology services and products, including weapons sales—all of which could be vulnerable to an effective boycott. Moreover, Israeli elites enjoy their dual nationalities, foreign passports, vacations abroad and second homes in Europe and America. If BDS puts those luxuries out of reach, it will have a strong psychological effect. The Israeli center has been only too happy to go along with occupation as long as it doesn’t have to see it or think about it or face the impact of it. But if those factors begin hitting closer to home, all that could change.

The Weight of History

Though the nationalist Israeli government believes it can weather this storm, Israel cannot do so indefinitely. Eventually, the swell of opposition will catch up to it. At that point, the attitude of American and European leaders will change from tacit acceptance of Israeli apartheid and occupation to outright opposition. With enough resonance in certain sectors of Israeli society, a political leader could arise who would buck the trend of rejectionism and ultra-nationalism that has ruled the country for the past few decades.

The prospect may appear unlikely or out of reach now. But this is what many said in 1989 before the fall of the Berlin Wall. It’s what many said during the era of the Troubles when it appeared the Irish and their British overseers would kill each other forever. Similarly, it’s what Americans said in the decades leading up the birth of the civil rights movement in the 1950s.

Conflicts based on deep injustice and imbalances of power between disparate groups have a habit of imploding under their own weight. Despite the deadlocked political process in Israel-Palestine, there’s no reason to assume it can’t happen there too.