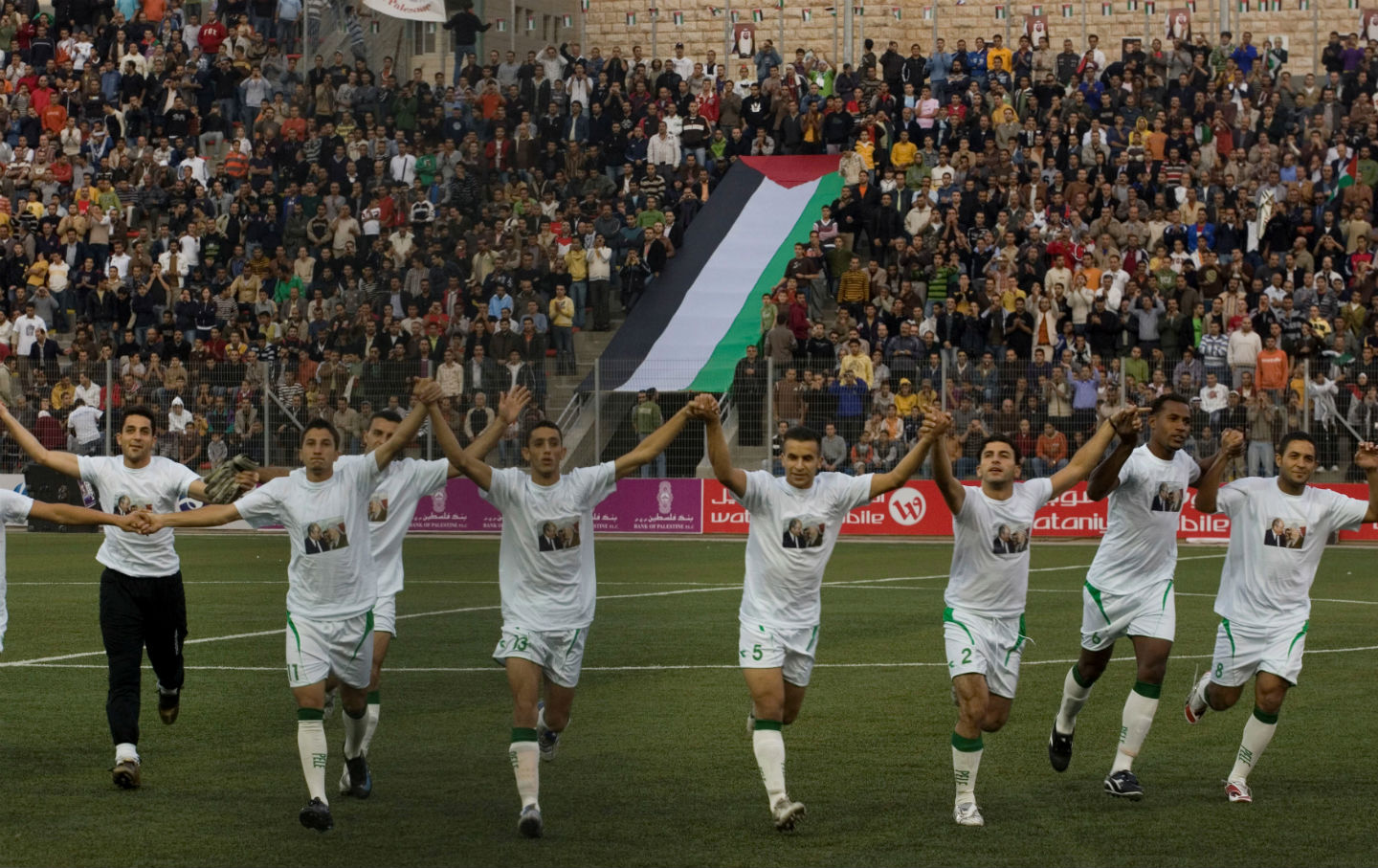 We have before us a point of agreement between Netanyahu’s Israel and the militarily vivisected area of land at times referred to as the Palestinian territories: the idea that sports and politics should not mix. Tragically—not unlike words such as “life,” “liberty,” and that whole “pursuing happiness” thing—the phrase means far less as it journeys from abstraction to reality. Israeli Football Association Chairman Ofer Eini and Chief Executive Rotem Kamer traveled to Zurich, Switzerland, last week to meet with reptilian FIFA chief (and self-described women’s soccer “godfather”) Sepp Blatter. Their mission? To change a meeting agenda item. The Palestinian Football Authority is scheduled to propose having Israel banned as a FIFA member country at the May 29 meeting of the organization’s global congress. Eini and Kamer want to get that proposal and all debate on the subject removed, with Eini describing the vote as “a flagrant move that seeks to mix politics with sport—something that is completely contrary to FIFA’s vision.” (For brevity’s sake, we will leave aside unpacking how “not mixing politics with sport” has about as much in common with “FIFA’s vision” as a KFC bucket of extra crispy has with “PETA’s vision.”)

Then there is Jibril Rajoub, the head of the Palestinian Football Authority. Rajoub says that he is pushing this proposal for the same reason that Israel is trying to prevent it from coming forward. “What I am trying to do is separate completely football and politics,” said Rajoub in an interview with Middle East Eye. “Sport is a tool to bridge gaps, to build bridges with all people all over the world.”

Rajoub wants Israel sanctioned because he believes that the travel restrictions and checkpoints, imposed by the Israeli government on the Palestinian Territories—not to mention the militarized separation of the West Bank and Gaza—has made the development of Palestinian soccer nearly impossible (this despite their recent historic qualification for the 2015 Asian Cup). Rajoub also plans on citing the detention and mistreatment of Palestinian national players by the Israeli Defense Forces, as well as the recent comments by Beitar Jerusalem coach Guy Levi, who said on the radio last month that their team would “never” sign an Arab player.

“The Israelis are enjoying the status afforded by being part of FIFA, while depriving a neighbouring administration of their rights to play football,” said Rajoub. “For years we have asked confederations in Asia and Europe to interfere and stop the suffering of Palestinian footballers…. When that didn’t work, we decided to go directly to FIFA’s general assembly.”

The PA would need 75 percent of the 209 global associations, which is unlikely, but if it passes, Israel, in the words of Kamer, would see “all its international activities…come to a halt,” It would also be an isolating public relations nightmare for Netanyahu’s already beleaguered government. Just as the prime minister has been trying to get the stink of a highly racialized re-election campaign off his body, he has been under fire for the treatment by Israeli troops of Ethiopian Jews staging their own unprecedented #BlackLivesMatter protests against state violence. Israel and Netanyahu have also been waging a furious public relations campaign against the accusations of the Boycott, Divestment, and Sanctions movement that they are an apartheid country not unlike South Africa. If FIFA suspends Israel, it would become the first country banned by the soccer federation since—yikes!—apartheid South Africa.

Both sides want to keep sports and politics separate, which makes this a fascinating look at what people mean when they make that kind of a plea. In sports it is very common to hear this sentiment from owners, media, and fans but it is rarely if ever used to critique the hyper-militarization of sporting events or the use of public funds to build stadiums (or, in a recently exposed synthesis, the use of public funds to celebrate the military). In other words, it is not sports and politics that they want to keep separate but sports and a certain kind of politics. “Keep sports and politics separate” morphs into code for ‘just shut up and play.’”

In this case, the Israeli Football Association is saying, “Do not use sports as a way to argue for statehood. Sports is not the place for that kind of rhetoric.” The Palestinian FA is saying, “We can’t compete because the politics of the Israeli occupation makes developing soccer a near-impossibility.” This is a very tough argument for the Israeli FA to win. If sports and politics were truly kept separate, then the Palestinian Football Authority would be able to travel freely, receive foreign visitors, and enter international tournaments without the fear of not being able to show up. As I’ve argued here many times, attacking the ability of Palestinian soccer to develop is also about attacking fun, play, and hope. While the Palestinian FA has facts on their side, no observer expects them to win 75 percent of the vote. But if Blatter even prevents this from even being raised on May 29, it would be an ugly gesture from an ugly individual. FIFA is hardly a moral force in this world, but soccer certainly can be. It is the closest thing we have to a united global obsession that links every country. FIFA’s sole organizational obligation is to make sure that everyone has a chance to play. What worries Netanyahu is that discussing this issue in soccer then becomes like pulling a thread on a sweater. If soccer is warped by occupation, then what about education, healthcare, or basic staples of civil society? That’s a question the Israeli FA is now scrambling to see unasked.