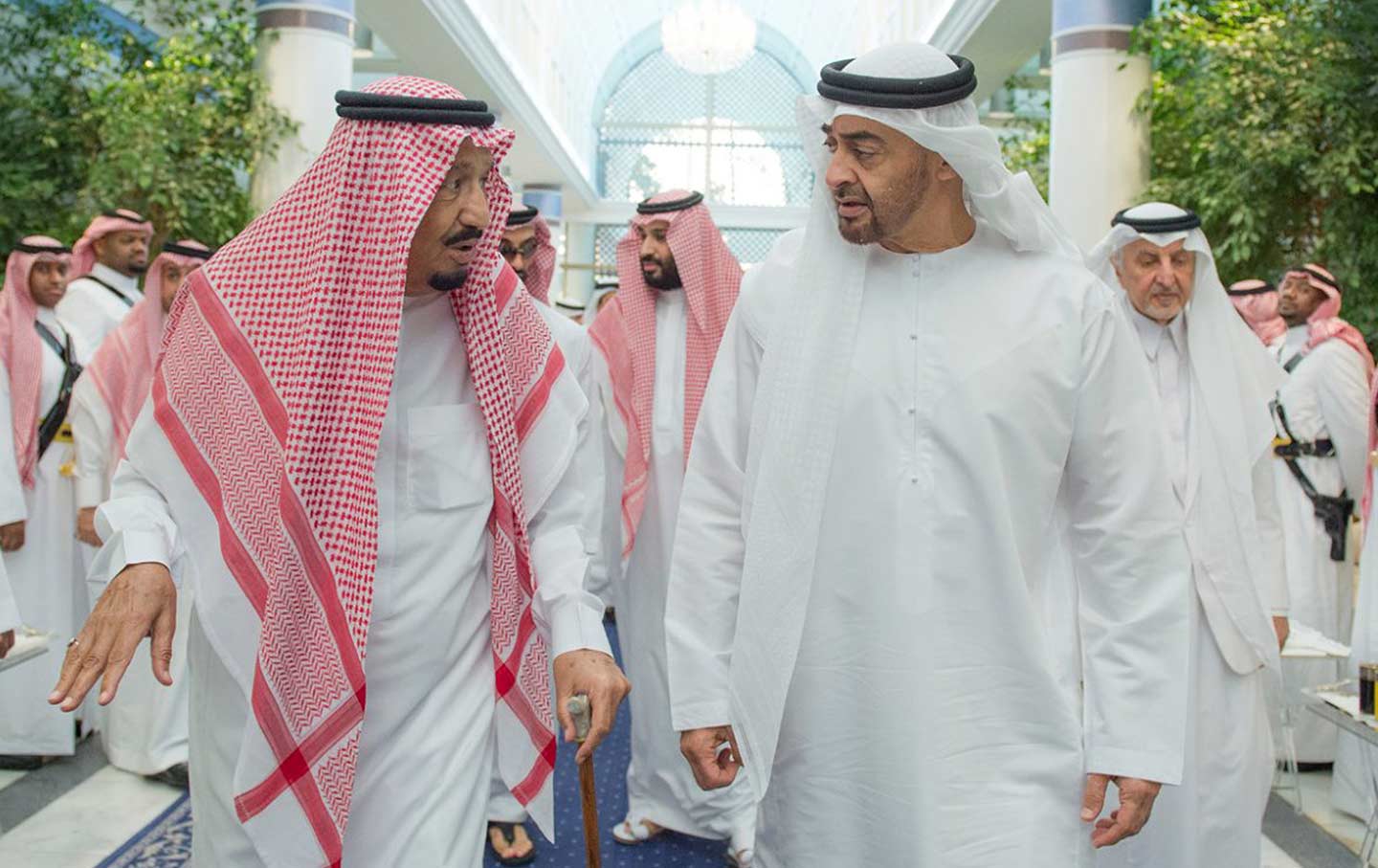 Analysts who have made so much of a Sunni-Shiite division as the key to politics in the Middle East must be scratching their heads, as a conflict between two hard-line Sunni (actually Wahhabi) states, Saudi Arabia and Qatar, is now roiling the region’s politics. The Saudi-led boycott of Qatar requires that small Persian Gulf principality to respond to a list of 13 demands by July 3, but there is no sign that Qatar’s government has any plans to accede to them. At the same time, Shiite Iran and largely Sunni Turkey have come to Wahhabi Qatar’s defense. Is Saudi Arabia only managing to strengthen Iran’s hand in the Gulf?1

The Saudi demands include cutting off diplomatic relations with Iran, ceasing support for the Muslim Brotherhood, and closing down the emirate’s main claim to fame (besides its fabulous natural gas riches), the Al Jazeera satellite network. Saudi Arabia has cut the Qatar peninsula off from overland food supplies that used to go by road from the Levant through Saudi Arabia to Doha. Riyadh and its allies (including Egypt) have denied Qatar Airways overflight and landing rights (which is illegal in international law). And the United Arab Emirates (UAE) is now saying that Qatar could be permanently shunned and economically boycotted by the Gulf Cooperation Council. These moves will likely destroy the six-nation GCC, formed in the early 1980s from Sunni and Wahhabi Gulf emirates and monarchies, to which both Qatar and Saudi Arabia belong, along with the UAE, Kuwait, Bahrain, and Oman. Oman has not gone along with the boycott of Qatar, and has itself long had lines into Iran.2

Iran President Hassan Rouhani called the young Qatari emir Sheikh Tamim bin Hamad Al Thani on Sunday to reassure him that Iran’s airports and air space are open to Doha, and that Iran would like to expand economic ties, especially with regard to the private sector. Iran has also sent several planeloads of food to the small emirate. Although the wealthy Qatari citizens, some 300,000 people, are in no danger of not being able to afford food imported expensively by sea and air, high grocery prices could provoke an exodus by the some 2.5 million guest workers. That outcome would devastate that small part of the Qatari economy not dependent on hydrocarbons and make the emirate even more demographically exposed (Qatar has about the same citizen population as Iceland; Saudi Arabia’s is more like that of Romania). 3

The Saudi demand that Qatar cut off Iran makes no sense, as the two countries share an enormous natural gas field.

Qatar points out that the Saudi demand that it cut off Iran makes no sense for Doha, given that the two countries share an enormous underground natural gas field that stretches under the Gulf. Qatar has been able to develop its fields and to export using the technique of liquefied natural gas (LNG), which can be put in canisters and shipped by sea. Iran was not allowed to have this technology while under sanctions. Qatar is thus way ahead of its partner in developing the fields, which has produced sore feelings in Tehran in the past. That is, while Qatar needs to talk to Iran, it is because of a long-running dispute, not because Qatar sides with Iran on most issues.4

Indeed, in Syria, Qatar and Iran have been on opposite sides of the civil war. Iran’s Revolutionary Guard Corps (IRGC) has propped up the Baath state of Bashar al-Assad. Qatar has supported the mostly Sunni Arab Free Syrian Army (many of whom sprang from the ranks of the Syrian Muslim Brotherhood), including some relatively hard-line groups such as the Free Men of the Levant (Ahrar al-Sham), which has not scrupled to make a battlefield alliance with the Al Qaeda affiliate in Syria, the Levantine Conquest Front (Jabhat Fateh al-Sham, formerly the Nusra Front, which now says it has cut links to Al Qaeda leader Ayman al-Zawahiri but is widely disbelieved). But Saudi Arabia has supported groups in Syria much more hard-line than the relatively moderate Muslim Brotherhood, including the Salafi Army of Islam (Jaysh al-Islam), which has spoken of massacring Syria’s Alawite Shiites.5

How Trump Is Inflaming the Middle East’s Proxy Wars

Tehran and Damascus are the ones who view the Free Syrian Army as terrorists. Since Iran and Russia have all but won the Syrian civil war, however, and Qatar’s favorite groups there have been defeated or pushed into remote rural enclaves, Iran can afford to be magnanimous. It is now seeking to bury the hatchet with Qatar and Turkey (which also backed the now-defeated Sunni rebels, whether fundamentalists or liberals). Russia and Iran have been negotiating with the Syrian rebels at Astana, Kazakhstan, and Turkey and Qatar have been very much involved. They have locked Saudi Arabia and the United Arab Emirates out of these talks, giving them no say in the future of Syria but acknowledging Iran’s marker there. Likely the Saudi and UAE pressure on Doha is in part pique at this exclusion from a say in the future of a country they both feel they have a stake in. The Saudi Syrian proxy, the Army of Islam, has suffered a string of defeats amid faction-fighting among the rebels, and likely will play no role in the future of the country.6

Saudi Arabia and Qatar are the only two Wahhabi states, which adhere to the teachings of mid-18th-century fundamentalist preacher Muhammad ibn Abd al-Wahhab. Whereas Sunni Islam is a big-tent tradition that frowns on excommunication, the Wahhabis traditionally threw people out of Islam at the drop of a hat, including the Sunni sultans of the Ottomans, one of the Muslim world’s longest-lived and largest empires. Whereas Sunni scientists have throughout history and even today been at the forefront of their fields, Wahhabis held that technological innovations not sanctioned by the Muslim scripture, the Qur’an, are suspect. Whereas Sunni Islam has been relatively tolerant of Christians, Wahhabi militants disapprove of allowing them to practice their religion in public. Whereas modern Sunni institutions have sometimes reached out for dialogue with Shiites, Wahhabis have violently repressed that branch of Islam. Qatar’s version of Wahhabism is more liberal than that of Saudi Arabia, however. There are churches in Doha and alcohol sales are permitted, though recently a heavy sin tax has been imposed on them.7

Riyadh can’t accuse Qatar of supporting extremist groups in Syria—that would be the pot calling the kettle black.

Saudi Arabia accuses Qatar of supporting terrorism (a charge which is frankly baseless), but in doing so, it does not mean extremist groups in Syria. That would be the pot calling the kettle black. Indeed, the idea of Saudi Arabia accusing someone else of spreading around Muslim extremist ideas is enough to make a person fall down laughing. Rather, Saudi Arabia, the United Arab Emirates, and Egypt have decided to brand the Muslim Brotherhood a terrorist organization. This charge is deeply unfair. The Brotherhood was founded in Egypt in 1928, initially as a revivalist movement by Sunnis opposed to British domination of their country. After Britain reoccupied Egypt during World War II, the Brotherhood turned to terrorism, and a cell continued these activities in the 1940s and ’50s. But in the early 1970s, its leadership made a pact with the nationalist government of Egyptian President Anwar Sadat to give up political violence. The organization has stuck to that pledge, has been running for election to Parliament for decades, and won parliamentary and presidential elections in Egypt in 2011 and 2012, respectively. Some think that Qatari money, the pro-Brotherhood stance of Al Jazeera, and the influence of older Brotherhood exiles in Doha enabled these victories at the polls.8

The Brotherhood in 2011-13 can be accused of overplaying its hand and of an almost cult-like cliquishness, but not of terrorism. The coup of Field Marshal Abdel Fattah el-Sisi in summer of 2013 was enabled by mass Egyptian discontent with Brotherhood rule, and Sisi needed a pretext in the aftermath to establish his government’s legitimacy. Likely in consultation with the Saudis, Sisi declared the Brotherhood terrorists, killed thousands, jailed tens of thousands, and attempted to uproot one of Egypt’s more popular and well-established political parties. Qatar protested and funded a pro-Brotherhood, anti-Sisi satellite network, to little avail. Saudi Arabia and the UAE have propped up Sisi and the officer corps with billions of dollars in aid, though it is not clear where the money actually has actually gone.9

Hypocrisy abounds in this story. The United Arab Emirates has for a long time been much closer and friendlier to Iran than Qatar. UAE banks are widely thought to have laundered money for Iranian concerns during the sanctions years. Up to 500,000 Iranians live in the Emirates (population c. 9 million). Qatar once had a small expatriate Iranian population, but most of them have been successfully encouraged to leave.10

That is, the current Saudi vendetta against Iran, out of pique at being outplayed in Iraq, Syria, and Lebanon, is probably not the actual driver of the campaign against Qatar. If that were the case, Saudi Arabia would have turned on the Al Maktoum in Dubai first and foremost. Rather, it is about the populist vision of Islam represented by the Muslim Brotherhood, versus the top-down, pro-monarchy, hard-line Sunni Salafism favored by the Al Saud. In this struggle, between a Brotherhood that has at times accommodated itself to liberal institutions and an authoritarian Salafism, the Al Thani ruling family in Qatar stands accused of being Red Princes.11

That Shiite Iran should be a primary beneficiary of this spat between Wahhabi ruling houses over which form of Sunni fundamentalism should be supported by the Gulf would be an astonishing outcome. Tehran, in emphasizing what the Qatari private sector can do for it, seems to hope to replace its Dubai banking with Qatar’s. Given that both the United States and Turkey have troops on Qatari soil, and given that Saudi Arabia’s armed forces are bogged down in a fruitless and highly destructive war in Yemen, Qatar probably faces no military threat. In light of its vast natural gas wealth, Doha can likely weather the opprobrium from Riyadh, at least in the medium term. In the meantime, who could have predicted that an overly ambitious Saudi Arabia might provoke what some have called a “Qaxit” from the GCC, and actually strengthen Qatari relations with the ayatollahs in Tehran?12