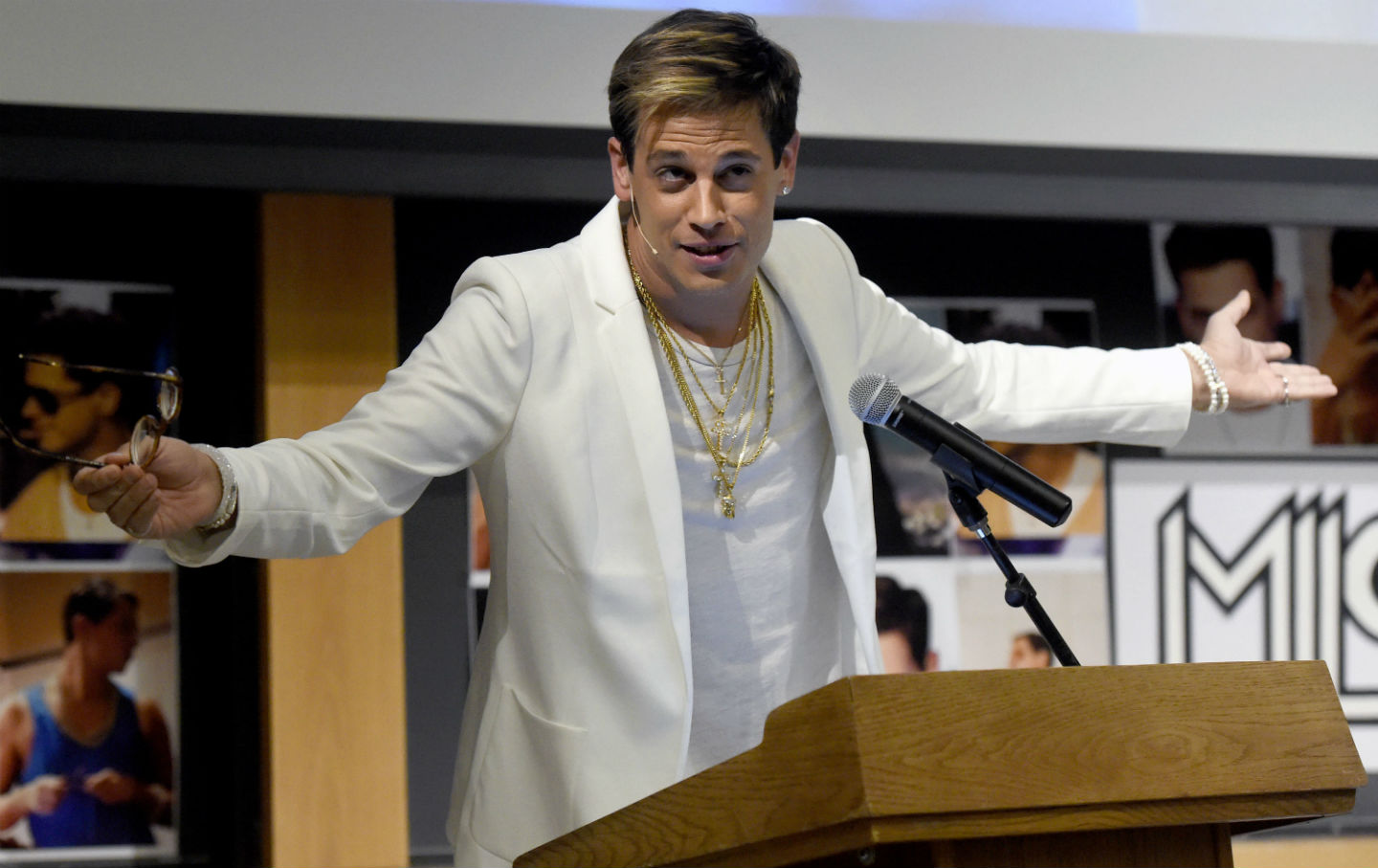 On January 25, 2017, Milo Yiannopoulos speaks at the Mathematics building at the University of Colorado in Boulder, Colorado. (AP / Jeremy Papasso)

The lackluster, celebrity-free Republican convention in Cleveland last summer had at least one breakout star: Milo Yiannopoulos, the feminist-hating, Jew-baiting provocateur, who’s made a career out of potty-mouthed attacks on political correctness. Breitbart News executive chair Steve Bannon hired Yiannopoulos and made him an alt-right star, and when Bannon became Donald Trump’s campaign chair, suddenly Milo was everywhere: at bookstores, on Cleveland’s hot streets, headlining a big “Gays for Trump” party, at which he told an audience of white supremacists and adoring male acolytes that the man he calls “Daddy” would protect the country against the scourge of Muslim terrorism. He rode that wave to a quarter-million-dollar advance from Simon & Schuster for a book titled Dangerous, and this week got himself invited to address the Conservative Political Action Committee conference.

And then he was suddenly uninvited after video and audio of Yiannopoulos praising sex between grown men and underaged boys surfaced online. Simon & Schuster quickly canceled his book for the same reason. (Long-running complaints about Yiannopoulos’s racism and misogyny didn’t dissuade the publisher, but this did.) Then Yiannopoulos tried to apologize, sort of: “I am a gay man, and a child abuse victim,” he wrote on Facebook. “My own experiences as a victim led me to believe I could say anything I wanted to on this subject, no matter how outrageous.” Amazing: The guy who derides “identity politics” and the “victim” mentality of “social-justice warriors” says his status as a gay man and abuse survivor should protect his right to praise pedophilia.

But the question everyone should be asking is, how did a low-rent scam-artist like Yiannopoulos rise to the top of conservative politics, anyway? Even some conservatives are mystified. Reagan biographer Craig Shirley was aghast. “This is the first time I can recall a spoiled man child whose main purpose is self-promotion being selected as…[a] speaker at CPAC,” Shirley told The Daily Beast’s Matt Lewis.

Shirley’s memory is a little short. CPAC helped mainstream another “spoiled man child whose main purpose is self-promotion” just four years ago when the group invited Trump to speak at its conference. Yiannopoulos’s political trajectory tracks that of the man he calls “Daddy.” His fall shows that the craven opportunism of the modern conservative movement has at least one limit: pedophilia. Of course, both men should have been stopped long ago.

The rise of Yiannopolous is evidence that modern conservatism is mostly driven by fear, backlash, scapegoating, and whiny complaints about “political correctness,” which essentially comes down to white men complaining they can’t insult women and people of color without censure anymore. That’s the heart of Trump’s appeal, too.

The magic of Milo is that he spews bigoted filth while gay, which he thinks makes him a brave freedom fighter. He’s a shapeshifter: When confronted about his anti-Semitism—he called a Buzzfeed writer “a typical example of a sort of thick-as-pigshit media Jew, who has all these sort of right, P.C. politics”—he insists he, too is Jewish, though he was raised Catholic (his maternal grandmother is Jewish). He told another interviewer:

Yiannopoulos also thinks he can make racist jibes because his boyfriend is black (his creepy odes to “black dick” make you yearn for the subtlety of Titus Burgess’s hilarious “Peeno Noir.”) He doesn’t get that fetishizing the sexuality of black men won’t make you a civil-rights hero. Just last week he called the brilliant comedian Larry Wilmore and intelligence expert Malcolm Nance, both African American, “stupid,” on HBO’s Real Time. (If you’re having a tough day, go watch Wilmore tell the little troll, “Go fuck yourself.”)

Of course, he can’t claim the safe space of identity politics when attacked for his brute misogyny. He’s called feminism a “cancer” and insists birth control makes women “unattractive and crazy.” For a gay man, he has a lot of feelings about the feminist “body positivity” movement. Grilled by ABC’s Terry Moran over his attacks on comedian Leslie Jones, mainly about her weight, he exploded: “I’ll tell you what’s revolting. What’s revolting is the body positivity movement. What’s revolting is this idea now that you can tell women that they’ll be healthy at any size.”

He sees trouble ahead if uppity women keep gaining rights and power: Civilization will stall, and then collapse, because women aren’t smart enough to keep society advancing. Because of rampant feminism, men are “checking out en masse” from intimate relationships. When that happens, he predicts,

You can say good-bye to all of society’s best astrophysicists, mathematicians, philosophers, composers and chess players. Scientific progress will effectively stall, because men are just as happy beating a video game as they are solving the riddles of the universe—and they’ll take the entertainment option if they have no interest in impressing women. Women will not take men’s places in these disciplines, because there simply aren’t enough women with IQs over 120.

Donald Trump doesn’t say things like that, but he acts that way, as he stocks his cabinet entirely with men, except for Transportation Secretary Elaine Chao, who is the wife of Senate majority leader Mitch McConnell, and the anti–public education secretary, Betsy DeVos. If Trump believes women are equal, he certainly doesn’t show it.

The parallels with Daddy Trump go on: Yiannopoulos ran a business in London that relied on stiffing its workers; more than a year ago, he started a foundation to send white men to college, but he still hasn’t given any of the money away. After criticism, he finally filed papers for the Yiannopoulos Privilege Grant this month.

Like Trump, Yiannopoulos brings to the table no brave new thoughts: no grand theory of capitalist renewal, no trenchant critique of Obama-Clinton liberalism. Their appeal relies largely on their promise to fight “political correctness” and to smite feminists and uppity minorities who infringe on their God-given right to make crude, rude racist and misogynist jokes—and to proclaim them frankly lesser than white men.

But Yiannopoulos was brought down by his online paean to pedophilia. Trump, by contrast, paid nothing for his videotaped boast that by being “a star,” he can grab women “by the pussy” without fear of sexual-assault charges. Maybe the double standard will help Yiannopoulos understand the critique of patriarchy… oh, never mind.