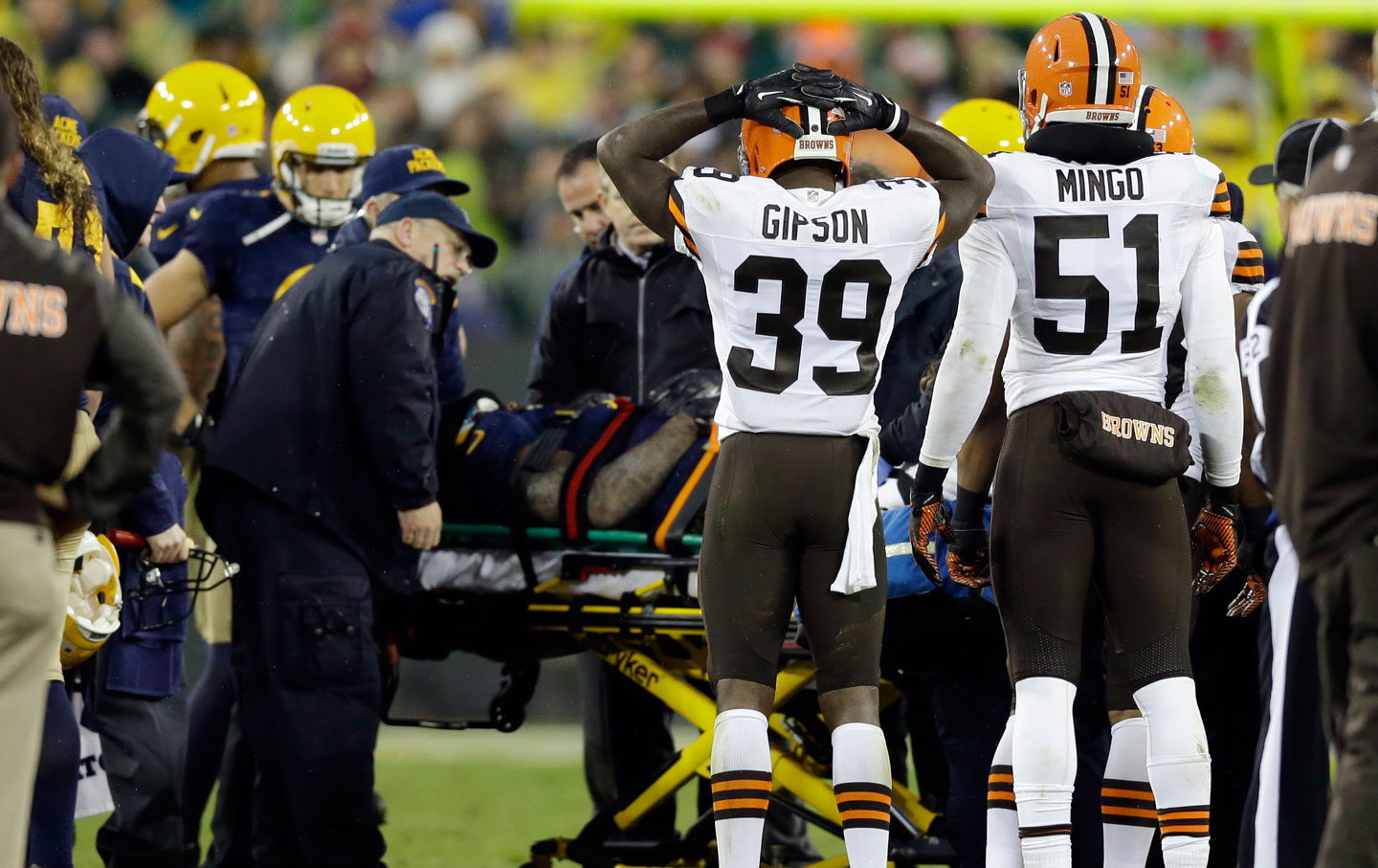 The Green Bay Packers’ Jermichael Finley is taken off the field on a stretcher after being injured after a catch during the second half of an NFL football game. (AP Photo / Tom Lynn)

EDITOR’S NOTE: This article originally appeared in the Winter 2018 issue of Jacobin.

LeBron James, in addition to once being a superstar high-school basketball player, was almost equally impressive on the football field, an all-state wide receiver playing for St. Vincent–St. Mary’s in Akron. He has often spoken often about his love of the game, but LeBron’s own two sons—both basketball prodigies—don’t play football. When asked why, LeBron said, “I needed a way out. My kids don’t need a way out. They’re all right. I needed a way out when I was a kid. I tried to do whatever it took to get out. That’s my excuse.”

Similar lines are often heard from NFL players in recent years: words to the effect of, “I play so my kid doesn’t have to play.” These days, I am currently doing a book with Seattle Seahawk Michael Bennett called Things That Make White People Uncomfortable, and his thoughts on this subject certainly match the title. He says without equivocation that if he had a son—Bennett has three daughters—that he wouldn’t want them in the NFL.

“Trying to become a pro football player creates its own version of PTSD,” he said to me, “It’s like no other sport because whether it’s the CTE, or an addiction to the violence.… I just know too many people who leave the game and get so depressed or so confused because they don’t know who they are when it’s all done. It’ll make you cry to see some of these former players behind closed doors, and I don’t know any other sport that does that.”

Science is not football’s friend. The more we learn, the more we know that the risk of developing CTE (chronic traumatic encephalopathy), a degenerative brain disease, is significant. More players are retiring early. More speak openly about their fears of not being able to remember their loved ones or wondering whether in the near future if they will be too weak or addled to pickup their children. There is a famous decades-old quote from a boxer named Buster Mathis who said, “Don’t box, play football. Because nobody ‘plays’ boxing.” Now we know that no one “plays” football either.

Researchers at Boston University say that they are close to developing the ability to test for CTE in living players, instead of waiting for the autopsy. That could change the trickle of athletes retiring young out of existential fears of future brain damage into a flood. Even players who avoid CTE know, as NFLPA Executive Director DeMaurice Smith said to me, “This is the only union job with a 100 percent injury rate.”

So does that mean it’s not “moral” to watch a ceaselessly brutal sport that is 70 percent black but has no black ownership? It’s a worthwhile question. But to leave it at the above also paints an incomplete picture of what professional football is. It removes the question of labor. Pro football players are not just victims of this system, any more than any of us who have to work for a living are “victims.” They are also union workers, the only sports union that’s part of the AFL-CIO, who fight collectively for better safety standards, fair pay, and do so on the highest possible stage. In a country whose media don’t cover labor issues, sports unions are in many respects our best tool in arguing with people about the importance of solidarity—not to mention that these player associations have supported initiatives against racism, sexism, and homophobia.

We also have to be honest that this is dangerous labor that players enter into willingly. Many are driven—unlike LeBron’s kids—down that path by poverty, but that also describes most working-class jobs under capitalism: dangerous and dirty work that would not exist in a world where people had the true ability to choose their life’s pursuits without economic coercion.

Consider coal mining: In a better world, we would want to see it abolished. It’s dirty, dangerous, and inefficient. Trump loosened regulations, and already twice as many coal miners died in 2017 as in 2016. Short of a world where a dangerous idiot isn’t president and we’re all in solar-wind mobiles, we should still be on the front lines fighting alongside coal miners for the best possible safety standards, wages, and health care.

Similarly, in football, no players are asking to be saved from their sport. They may not want their own children to play, but they don’t want their own jobs abolished either. Most just want to work and get out in one piece. Most fans just want to watch, forget their troubles for three hours, and then go back to the grind. As to whether it’s okay for an individual to watch, that is an individual choice. I generally don’t watch college football, because there are no salaries, no union, and it is raw indentured servitude. I have no illusions that I’m making a difference by averting my gaze, but it’s my choice and I’m happy to share why with whoever wants to ask. Similarly, there were calls this year to boycott the NFL because of the collusion by owners to keep Colin Kaepernick off an NFL roster. Those should be heeded if people want to show solidarity with the social-justice-minded quarterback, but we should also be careful and note that neither Kaepernick nor his many allies among NFL players called for a similar boycott. Imposing boycotts from the outside—savior politics—is not how this political tool can or should work.

If people feel disgusted by the spectacle of brain damage for entertainment, they shouldn’t watch. If they want to argue that point with others, they should do so proudly. But we should also recognize that all cultural commodities under capitalism are distorted, and to focus on one without a broader view of the world is shortsighted and can easily stray into patronizing hypocrisy, an act of telling people what they should or should not find to be “acceptable” entertainment. Hemingway wrote, “So far, about morals, I know only that what is moral is what you feel good after and what is immoral is what you feel bad after.”

Lately, the more I watch this sport, the more I get to know these players, the more I’m feeling bad after. I don’t know how much longer I can watch, precisely because working with Michael Bennett, seeing his own pain, and meeting his teammates makes disassociating from the violence an impossibility.

So is it okay to watch football? I’m not so sure if these kinds of questions even matter in a world built on a foundation of such stark immorality. When communities like Belle Glade, Florida, whose unemployment rate is around 40 percent, suffer in poverty a one-hour drive from Mar-a-Lago, it seems like we have a great deal of unfinished business before we get to football. Given how many players come from Belle Glade, I’m guessing that many of them will be marching right alongside us.